The market place and a new arrival


I've started crafting the detail for my Jung Pirates themed board, so it was time to start the markets.

Starting from the floor up then, both areas of control, needed to be well defined for the scenarios and to clearly mark the boundaries. First of all I thought about a low wall but this seemed a bit counter-intuitive as I wanted to represent an open market, with traders hawking goods to all. Instead I defined the boundary simply by planking the floor.

Now I could have stuck the planks directly to the floor but I think it would have been a nightmare trying to shape them properly as I wanted to keep the circular area rather than squaring it off. So I cut the shape of the lower area and raised platform out of cardboard from a cereal box and glued the planks to that, then I left them under some heavy books for 24 hours to dry before trimming off the excess with clippers and then sanding down the edges to produce...

the lower area is the 8" control zones of which you need two for one of the scenarios - "Ichi no Riten". These will be the markets themselves, both the flea and the flesh markets. The two raised platforms are 4" control zones and will be for the overseers of the market place. There are 3 such zones needed for the scenario - "Ryodo" and a single central zone for - "Botoku".  The central zone for each of these will be represented by a wide bridge (about 3.5") that joins the two sides of the river and the two markets.  The bridge will be built later but will be permanently attached to the board. 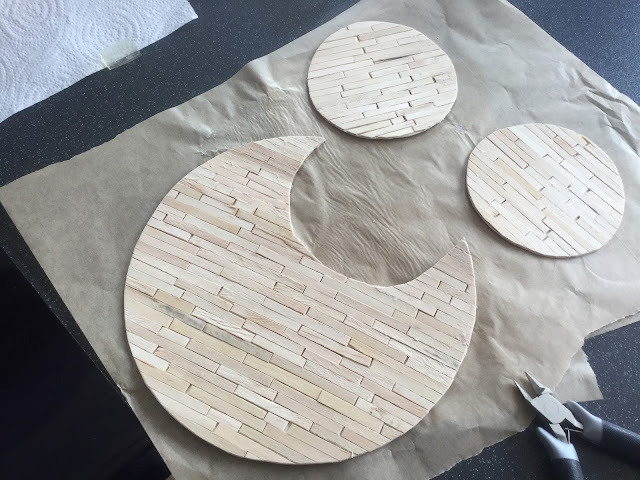 Now that I've defined the boundaries, the next step is the detail. For the market itself I needed stalls of colourful goods - plunder taken from ships across the Isles by the Jung pirates.  As regular readers of this blog know by now, I like making my terrain from scratch, mostly because it's fun but also because it's frugal! Time to break out yet more coffee stirrers and matchsticks to come up with these... 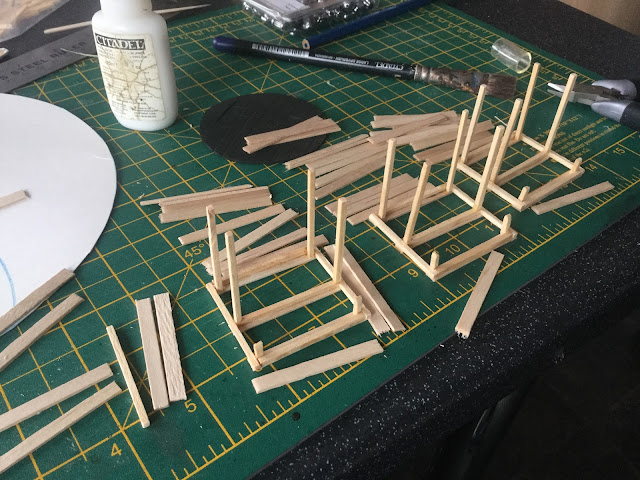 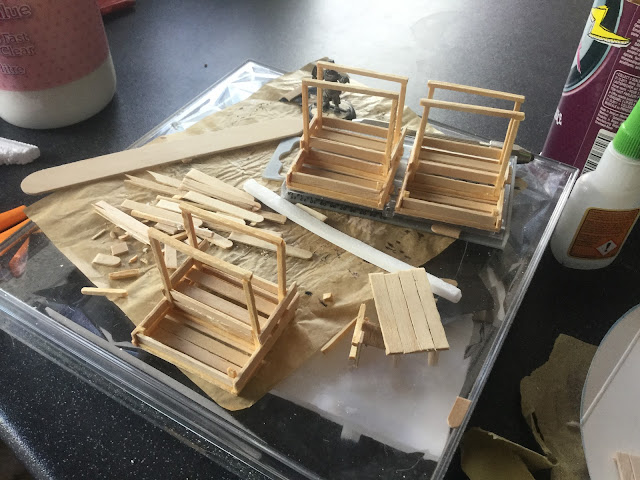 As to the fruit, I recently purchased some beads from "the Works" a discount store here in the UK. Some of the beads have gone on to be vases on a couple of my Prefecture of Ryu minis, but there were just some of them organic looking enough to become fruit and veg. With a little bit of paint I was able to do this.... 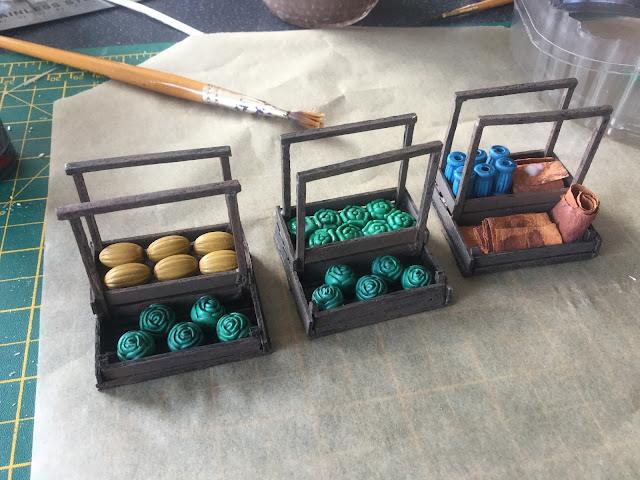 The vases were beads from the same pack as the fruit and the cloth was simply painted kitchen towel.  All in all very pleased with the effects so far.

Next up was the detail for the high table, the platform that overlooks the general market.  For this i decided to do a money lenders stall (although the moneylender himself has fled due to the trouble that's coming his way, in fact he fled in such a hurry he forgot his money.... 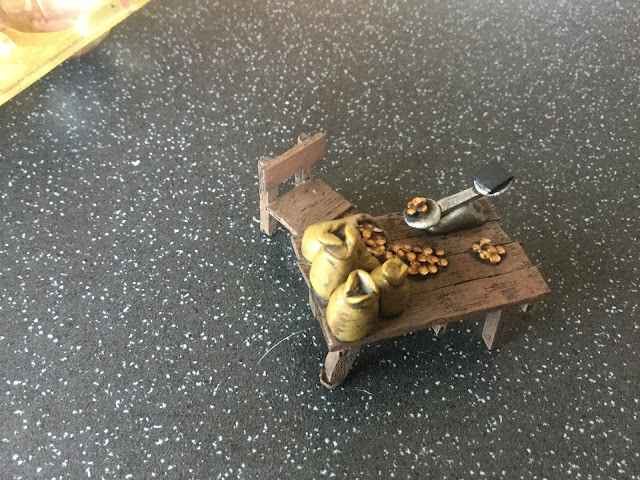 so far so good, so onto the flesh market.  This sounds kind of sordid and I was a bit worried putting in a market for the purposes of selling human beings, a practice that I find abhorent in every single way. But it was a staple of most cultures that people were sold into servitude whether for entertainment purposes - gladitorial type fighting pits/arenas or to fill brothels or to fulfill menial positions in wealthy  households.  I was tempted to hit Hasslefree's site and pick up some Harem girls and guy for the slaves but thought this just a step too far and came back from the brink of madness and went for empty pens etc.  The next thought was how to represent the market and my brain went back and forth over the problem. First of all i was going to do simple wooden post fencing, but the board was already going to be really brown from the river and earthy tones of the ground work and wooden planks. Then I hit upon doing screens, the wealthy would not want to be offended by the sight of the multitudes and would want discretion when choosing their 'stock' so i went back to the matchsticks and with a bit of cereal box card, slapped on a bit of paint and came up with these... 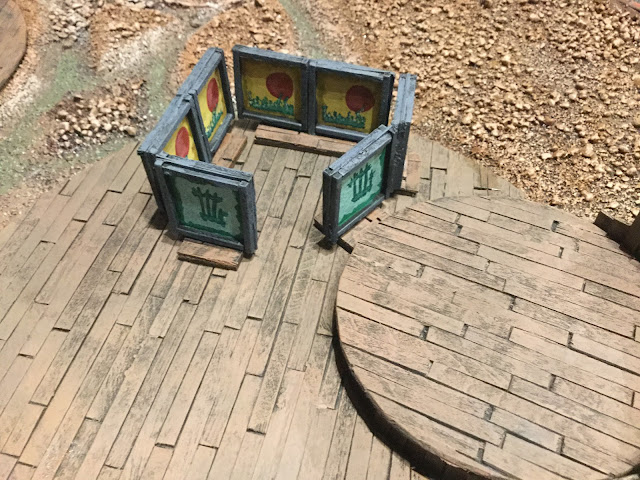 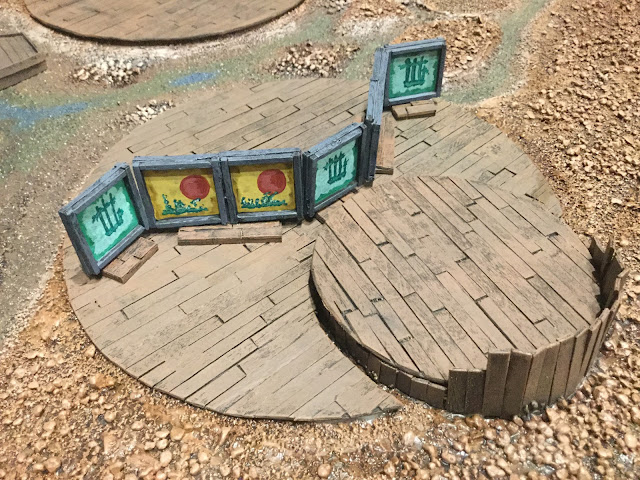 so not as complicated as the flea market but i think it breaks up the space nicely and provides some colour to a board that suffers from a lack of it. As to the higher platform, I wanted initially to do a kind of row of chairs for the wealthy buyers but quickly got bored after making one chair (which I used for the moneylender instead) plus again I think it would be less colourful.  Instead I went with an executioners block for the slaves to be kept in line - a bit dark I know and I do apologise but I thought it apt. 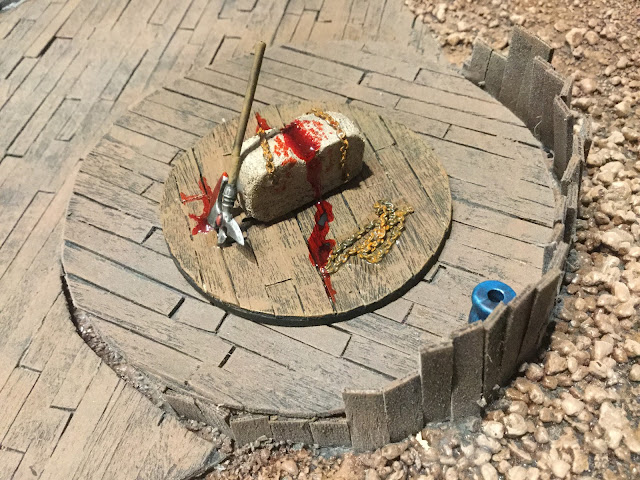 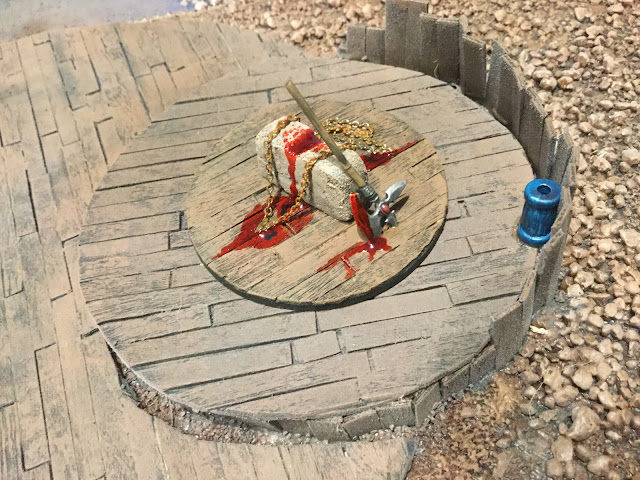 The stone was made out of foamboard with the paper sliced carefully off and roughed up a bit, I then sanded a groove in the middle where the necks of the unfortunates could be exposed.  the axe was made up from a High Elf sprue for Phoenix Guard and converted to remove the elvish bits (ribbons and such).  The chain was from a broken necklace courtesy of Mrs Gobbo. It's a little grim but effective.

Last but certainly not least, I have a new addition to da Grotto courtesy of the wonderfully wacky "Sensei" Jez from Carrion Crow.  Following what might have been a throw away comment from Jez on another of my posts which you can read here, Jez offered to build me the Jwar Island franchise of "Cupid Burgers" a chain of fast food providers scattered across the multiverse. All I had to do was provide the proprietor, I of course took him up on the generous offer (read "bullied him into") and received a rather well padded package recently in da Grotto... 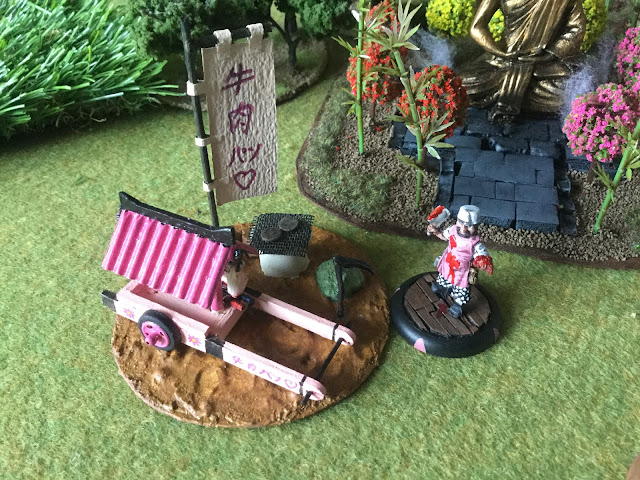 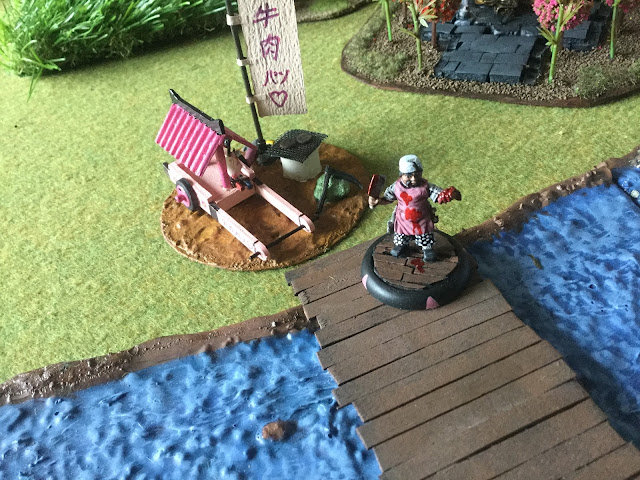 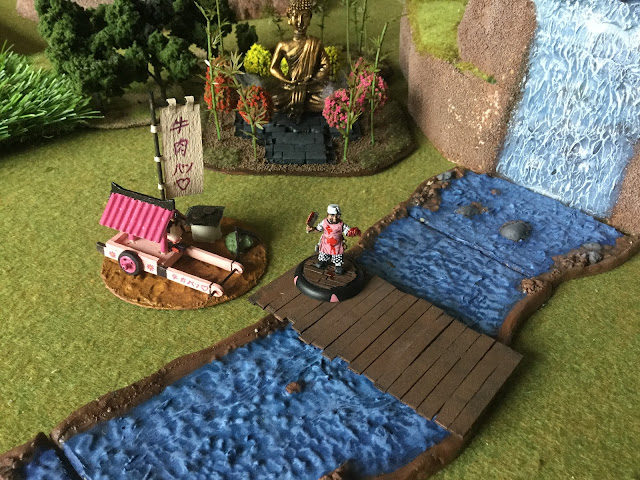 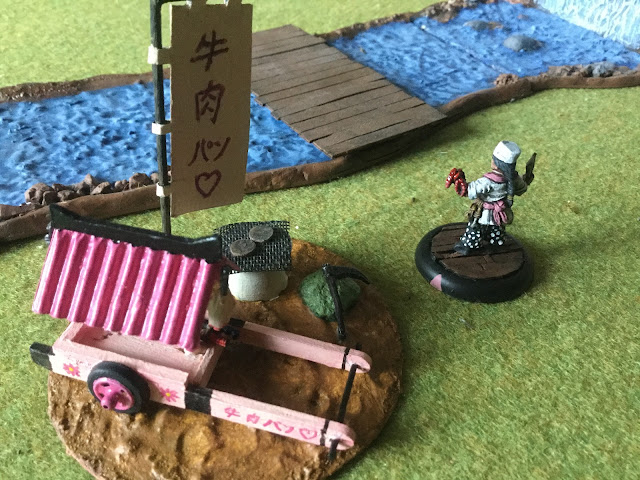 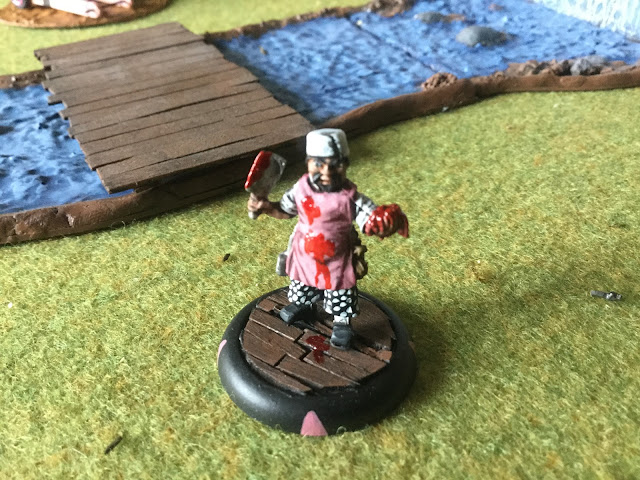 Master Crow has definitely done me proud with such an excellent piece, loads of little details and put together so well and painted brilliantly.  As for the chef, I haven't got a name for the fellow yet but I'm sure something will present itself later on but for now he is ready to find a place amongst the market stalls ala CMOT Dibbler.  I painted him up in corporate colours and he is busy preparing what may have been modelled as a squid but I've painted it up to look like prime 'organ meat'.

Cupid Burgers - the beating heart of the community!