I've pretty much finished my pirates board, the last things I needed to do was I guess the scariest in that they had the most potential to go wrong and that was the flocking and the most scary of all the water!

I tackled the water first thinking that if I buggered it up I wouldn't waste all my flock. To that end I had to think how I was going to achieve the right effect. I had already looked up how to paint the estuary bed, which you can see in my last post here, so now needed to cover it some how. I already had a little Woodlands Scenic water from my WW2 canal board, but it was only about half a bottle and that would only provide a thin layer, certainly not enough for a proper effect - still chucked it on though....

But should I go get more at £17 a pop or try to find a credible cheaper option? Rolling up my sleeves I mustered up my best web-fu (which isn't that impressive), however I did hit the jackpot with Luke's Affordable Painting Service - remember him from my last board posting? He not only helped me save money on my ink washes for the board by showing me how to make my own for less than a pound (half a jam jar of black wash and I only used about 20p worth of rinse aid and four drops of black paint...) but he showcased a cheap two part epoxy resin that is great for water effects.  this is the link to his FB page here and his Youtube for this effect here 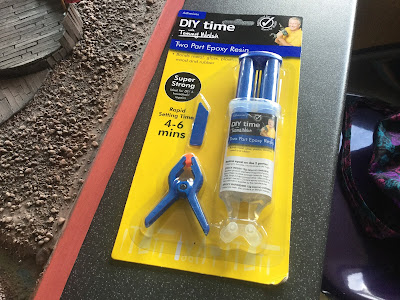 Each pack comes from Poundland and yes it costs just £1 however I needed 13 packs to cover my board, still it's £4 cheaper and to be fair the stuff dries in 10 minutes and completely hardens in 16 hours regardless of how thick the pour, meaning my drying time is significantly reduced by several days (each scenics layer takes over 24 hours to dry and I would need about 4!) the only down side is you have to work fast if like me you mix lots of it at the same time. I recommend using one pack at a time if you want to get a smooth pour, however you could end up with little steps or gaps all over where the seams between pours are.  For me I didn't want smooth as my water was tidal, this epoxy was just perfect for creating waves and eddies. The only criticism of the epoxy is that it is still a bit tacky even a few days later so i might have to sort this later with a thin layer of PVA. 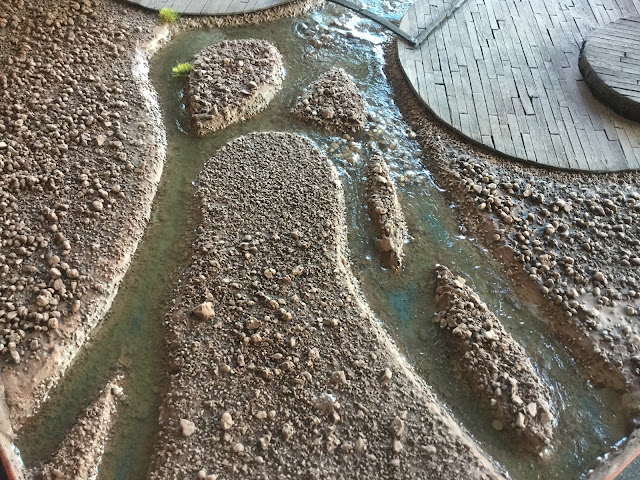 After the resin/epoxy pour it was time to build the bridge that joins the two markets and add the wooden jetties that I had prepared earlier, bringing us to this... 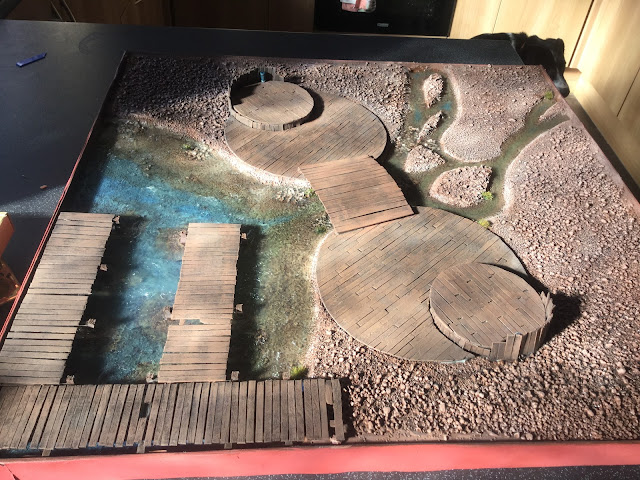 That just left the flocking, for the that I needed quite a bit and I was worried that I didn't have enough of my Army Painter Steppes Static Grass, which I usually use. I also wanted to lighten a rather brown board up so I mixed the static grass with a dark green flock from Woodland Scenics which I've had for ages but never used as it's too bright on its own. And I ended up with this..... 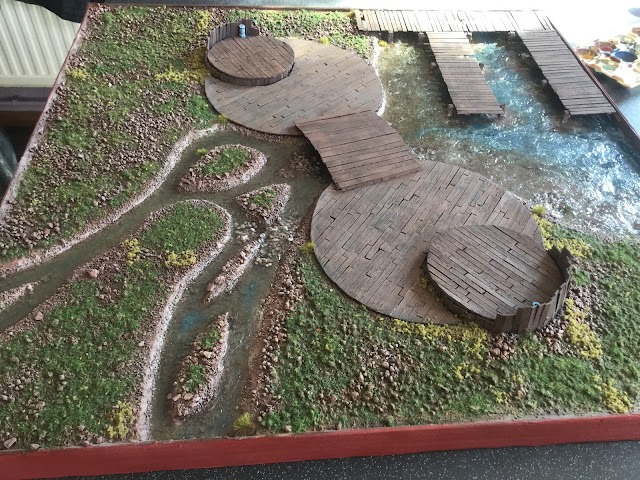 and after I've added all the details i've been working on. 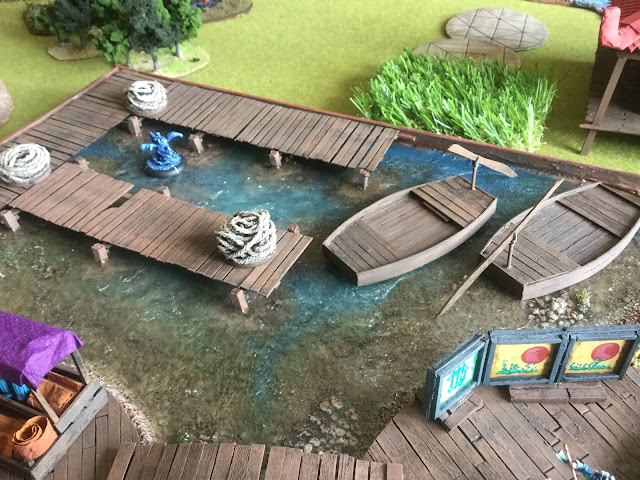 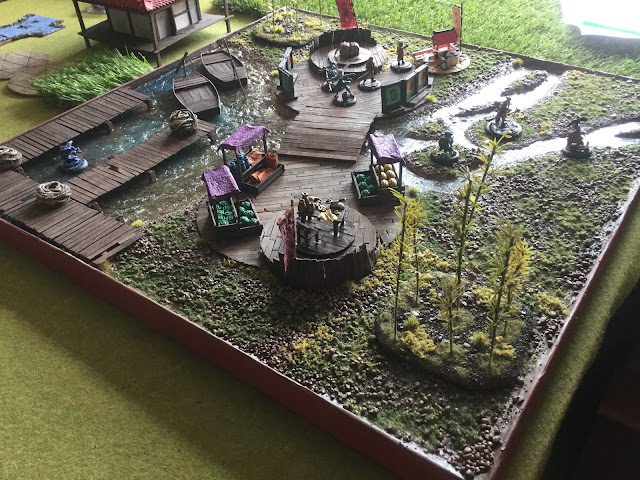 My thanks go to Richard Fairbrass, whose layout on his own board helped me incorporate the scenario objectives into my own.  Thanks to Luke's Affordable Paint Service for saving me a boatload (groan) of dosh, I wish i'd found your page before I inked my Temple board, which would have saved me a ton of cash! And big thanks to Joe from Zabadak's ZombieWorld for the inspiration in the first place, as soon as I saw those awesome pirate ships of his I wanted to do a board, i just lacked the ambition to make a big ship for the board (which was the original idea), sorry Joe but baby steps - next time though....

I shall just leave you with a quick video showing the board in more detail. This time I've narrated a little bit to accompany the video, I can only apologise for the sound of my voice which is a little rough - no I'm not ill, I really do sound this bad normally! Be thankful the original video was 4 minutes but Blogger could not update such a big amount of data and it took days to upload and then didn't work! so this is the abridged version.