Saga - Tale of 4 Gamers - the battles

Welcome to my battle report for the series.  This was our second game ever of Saga and would pit the Anglo-Danes played by Andy (i.e. me) and the Normans played by Rich.

The scenario that Rich and I randomly generated was “The Escort”.  The objective of this game is for the defending player (which would be me) to get 2 out of 3 of his baggage wagons from his deployment zone across the board and exiting from the attacker (Rich) table edge.  If I did this the Anglo-Danes would win, any other result and The Normans take the victory.  The baggage can take damage like any other piece on the board and is treated like Hurscarls for to-hit/damage purposes.  They can move every turn without Saga dice and move up to “M” like infantry.  This game should play to the strength of the Normans with a solid base of bows/crossbows and fast moving knights.  I on the other hand had to slog across the battlefield with foot troops.

As the defender I deploy and go first.  Before this though we needed to roll for terrain with 3 bits being chosen, I chose 2 of the terrain pieces  and took two wooded areas and Rich took a hill.  With all of the ranged weapons the Normans could muster plus their mounted troops, I needed to take advantage of the cover in order to get across the board.

**Note** for those who play Saga regularly there were some rules violations in this game, these were our first games and as such we were getting a feel for the whole battleboard concept and it took us until the very last game and the debrief after to fully get to grips with the way the game works. Also we had to proxy a baggage train so we had barrels and logs as well as a horse and cart – oops! 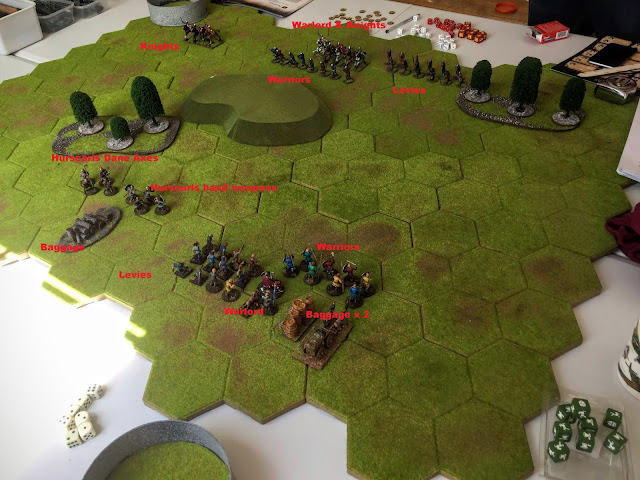 Waelwulf "the fierce" scowled as the sluggish moving wagons bumped and dragged tortuously slowly along the worn track.  The supplies they carried were desperately needed by the main forces camped out in the next village, Waelwulf had been entrusted to escort the precious vittles to the Army from the supply depot in Blokstuft some ten miles east.  The stands of trees that screened the track to the west looked ethereal in the morning mists.  It was these mists that cause Waelwulf's scowl to deepen further, he knew the Norman scouting parties were nearby, able to travel quickly due to the huge warhorses they insisted on riding.

A jingle of tack against armoured leg confirmed his fears as did the snort of a nearby destrier, the bastard French were here. "Form up lads!" he bellowed "We have company."  With a well practised ease the hurscarls of his personal slung their huge shields and hefted the long Dane axes that they preferred.  his warriors scampered ahead to form a screen to protect the wagons from the cowardly crossbow armed Normans.  The sound of whirring began as the Geburs tested their slings in anticipation of the coming fight....

Waelwulf looked around at his warband and nodded his approval "right lads, lets show them what we've got. For England!"

This was very much just a march forward for the Anglo-Danes as my slingers were out of range and I just needed to get across the board.  My Hurscarls that occupied the Left flank were behind the hill in cover but also placed to keep an eye on the Norman cavalry that would no doubt skirt around the hill and woods to attack the baggage train from the rear.

The Norman knights on the right flank surged forward as expected.  The rest of the warband stayed put and unleashed a storm of arrows/bolts at my warriors who were leading the escort decimating the unit, reducing them to half strength.

Turn 2
We got the turn sequence a little turned around and Rich went first this time – oops!
Rich attempted to cut the rest of the warriors down and I used a battleboard ability to intimidate the Normans into not firing their crossbows.  Again we (meaning me!) got the rules a bit mixed up and I stopped them with the same ability again (should only be used once per turn).  He then uses his bow armed troops to cut down 3 of the last 4 warriors down.

I move the warrior away from the front line in order to preserve the amount of Saga dice my warband generate.  The rest of the army advance if they can, however I angle the Hurscarls in an attempt to cut off the  flanking knights advances. 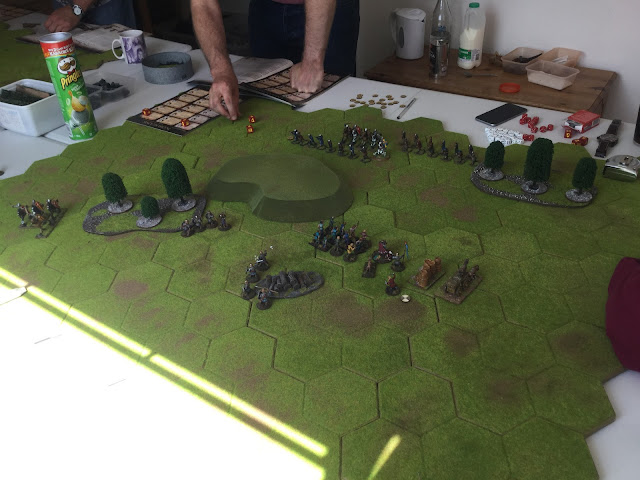 Rich advances his flanking knights ever closer, just far enough away that my Hurscarls cannot charge them.  His other knights accompanied by his warlord edge forward to try and cut off the baggage trains advance – this proves to be the turning point of the game….  The Norman levies shoot and kill 3 of the Anglo-Dane slingers.  The xbow troops can’t fire again due to “Intimidation”.

My movement took my warlord ever closer to Rich’s knights and his warlord.  My slingers fire is totally ineffective. The Hurscarls with Dane Axes close the gap with the flanking knights again blocking their advance with a double layer of elite troops! 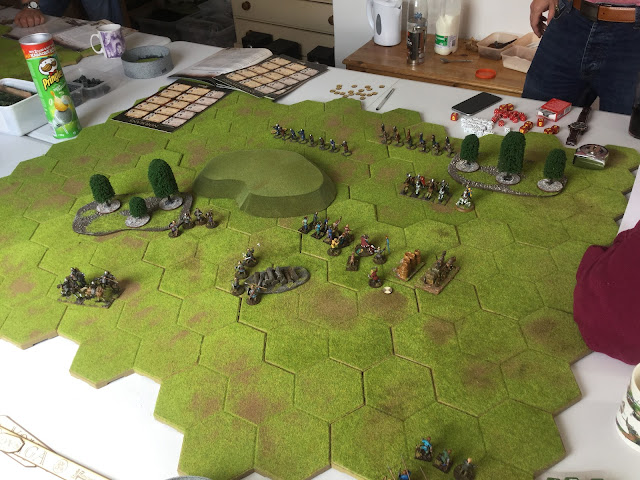 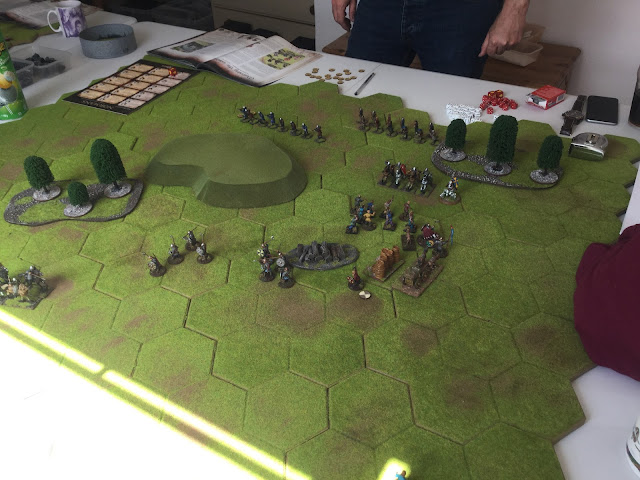 Rich  chooses to use his Saga dice to activate his archers who concentrate their fire on the baggage wagon (logs) that is on its own.  This tactic pays off as he destroys the draft animals and their handlers in a flurry of xbow bolts and arrows.  However it does leave his warlord vulnerable as he is within movement distance of my warlord and must move into combat to fight him, as he no longer has Saga dice left his knights cannot accompany him and my warlord brings him down!

The storm of arrows that fell from the sky thudded all around the panicking oxen and their drivers, cries of agony split the air as many bolts pierced the bodies of the baggage teams.  Waelwulf cursed as spilt sacks of grain tumbled to the ground, spoiling the precious supplies.

Ahead of him a small line of knights, their large mounts stamping iron shod hooves and snorting great plumes of steam from their nostrils in the cool morning.  Among them a man bellowed orders to the rest, clearly the leader of this raiding party. Waelwulf slung his shield over his shoulder and ran a calloused thumb down the keen blade of his enormous axe, opening up the skin with ease.

"Norman!" he shouted, "come face my blade, cowardly fool." With a start the mounted noble looked over at the burly Dane, his expression quickly becoming a disdainful sneer.

"Come William the Bastard's little turdling, let us fight like men if you can muster the courage!" Waelwulf taunted.  The Norman's sneer became a scowl and he drew his sword, kicking his mount into a canter.  The nobleman's retinue were caught off balance and had not moved an inch by the time he was a few spear lengths from the Dane who hefted his axe in preperation for the clash.

Holding his sword like a lance the Norman warlord bore down on Waelwulf, angling the blade for a devasting cut at the Anglo-Danish noble.  With a speed that belied his considerable size, Waelwulf sidestepped the charging horse and with a mighty swing, brought down the axe blade in an unstoppable blow aimed at the horses shoulder.  With contemptuous ease the blade parted muscle and bone, half severing the poor animals head in a spray of arterial blood.  The Norman, cried out his surprise as he was thrown over the top of the dying horse to land in a crumpled heap some distance away, his right leg held out at an unnatural angle.  With a practiced shrug Waelwulf pulled the axe from the animal and advanced toward the stricken French noble, this would be too easy....

My remaining baggage moves toward the far corner of the board with the Hurscarls with hand weapons moving into a screening position with the help of Saga dice. 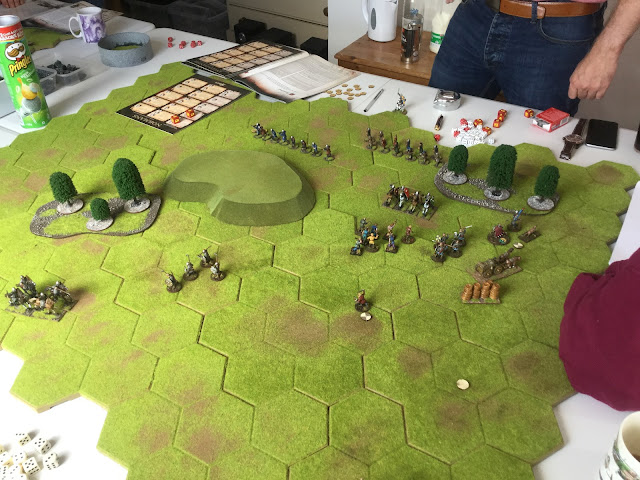 Reeling from the loss of his warlord, Rich is in dire straits, his Saga dice pool is reduced by 2, severely limiting his options.  His only hope is to destroy another baggage cart. desperately he tries to get his warriors to shoot at the hurscarl screen but intimidation prevents that from happening.

In response the Hurscarls charge into his knights and kill 3 for 1 loss in return, forcing the remaining knight to withdraw.  The Andlo-Dane slingers twice try to destroy the last man but fail to kill him off and becoming fatigued in the process. 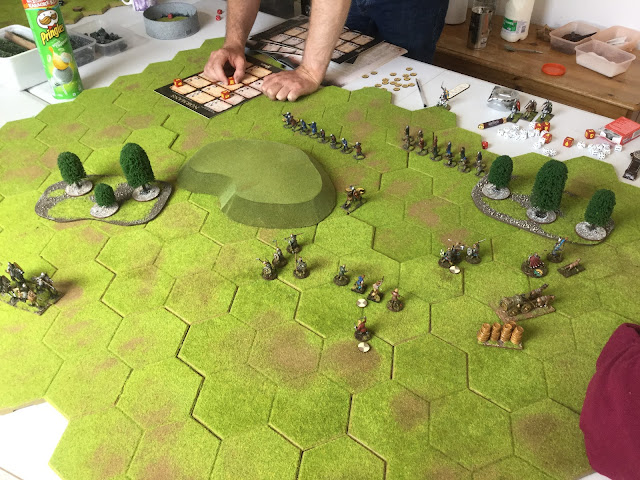 The writing is on the wall and Rich concedes..... 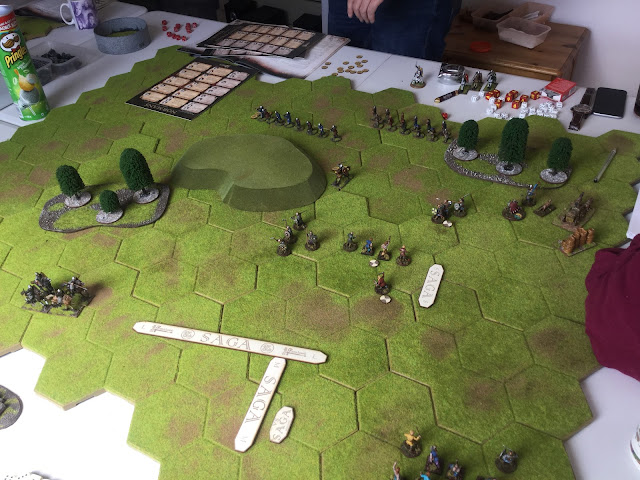 To be honest this game was a bit of a mess.  We got a bit turned around on the turn sequence and use of our battle boards was incorrect at times and down right useless at others.  The key to this game is the clever use of your battle board and to fatigue your opponent.  As it was only our second game it was inevitable that we wouldn't be using the boards in the best way, this combined with the loss of his warlord led to Rich's downfall and my victory.

The sounds of the taunts thrown by his men at the retreating Norman scum was music to Waelwulf's ears. Following the death of their leader, the Frenchmen had lost heart pretty quickly and had fallen under the spears of his bodyguard with ease.  Freki, his favourite hound chased the frightened horses, almost playfully scattering the remaining knights to the four winds.  Looking around he could see the peasantry raising their heads to the sky and praising their "nailed god" for HIS victory.  Snorting in disgust he muttered his own thanks to Odin and Thor for giving him the strength in battle to defeat the Normans
"come on then lads" he bellowed, "lets get these supplies to the army and then we can find the rest of these perfumed fools and send them back to France!"