I guess this is a bit of a blog filler post as I'm waiting for bat reps from the rest of the "Nerd Herd" regarding our recent  Saga day at Chris's (they're very late!). After the Saga posts which will probably  go over two weeks, I will be going down to one or two posts a week rather than the three that I'm currently putting out. No my enthusiasm for our marvellous hobby hasn't diminished at all, not even a little bit, but next year (academic not calendar) will be my last year of my degree before I qualify as a paramedic and as you can probably imagine it's going to be very hectic especially as I work full time and teach a weekly class to St John volunteers as well ....sheesh!

All this adds up to an overload and something has to give and that means the hobby has to be scaled down somewhat until I qualify. Of course I will do my best, but no guarantees. What I am hoping is that some of the Nerd Herd will step up and contribute some posts in my stead, I know Rich has some photos of his recent Waterloo trip etc that he wants to blog about and the others may want to showcase their own work as well.  I will still be gaming and painting and blogging about it too just not so often and I hope you understand the reasons why and yes I will still be attempting to catch up with all my favourite blogs and commenting as much as poss...

But all of that is for another day, in the meantime I shall explain the title of the post. Recently I've been posting almost exclusively Bushido related articles with a little Saga sprinkled about, but like most gamers I tend to have a few interests that I bounce between and unlike my blog buddy Steve G - from "The Gamers Cupboard" blog (for those of you who think you live the hobby try this blog, written with great depth and passion for our hobby, read it, you know you want to!) I haven't had my epiphany moment where I streamline these interests (I'm getting there though Steve). This means I have various factions, armies and warbands in various states of completion in da Grotto, waiting for a lick of paint and some TLC. As I currently have no Bushido minis to paint I thought I would revisit an old ongoing favourite of mine which I dip into and out of between projects - Greenskins!

Now those of you who consider GW to be the antithesis of hobby wargaming with their aggressive expansion tactics, try not to click off in protest, I too disagree with lots of their decisions in recent years but it looks like they may be turning a corner and trying to re-engage with their "veteran" gamers bringing back games like Blood Bowl, which had to go underground for a bit (haha not just for the DungeonBowl) and Necromunda, Battlefleet Gothic, man O War etc all of which I own and have been waiting for this day!! anyhoo I digress....

I have been a Warhammer Fantasy Battle enthusiast since i was 14 years old (i'm now 42) I have collected and given away more armies than I can remember, covering pretty much all the races except, rather ironically considering my blog name, yes you guessed it Greenskins. What?!? I mean I've always loved the O&Gs so why the hell not? I guess the answer really was because I couldn't face another "horde" army, having painted over 5000 points of Skaven. Yes I know O&Gs can have an "elite" type force with Big Uns and Black Orcs but where would the fun be in that? Without hundreds of Gobbos running around I may as well just collect Elves for my elite army (oops did that....).

BTW just to clear things up I don't subscribe to Age of Sigmar as being part of WFB, no sir, no I do NOT! i don't mind people using AoS as a skirmish set of rules and that's ok, but lets not destroy a world I have spent decades exploring and loving and always wishing it would be expanded into those far eastern continents of Nippon and Ind (and planning on doing it myself as fan fiction...) oops I digress again....

Anyway that changed recently when I was scrabbling around in my bits box for some parts to convert a model for a different project (I never did find what I was actually looking for) instead I found some broken old parts of a lead model I have had in my bits box since the 1980s. 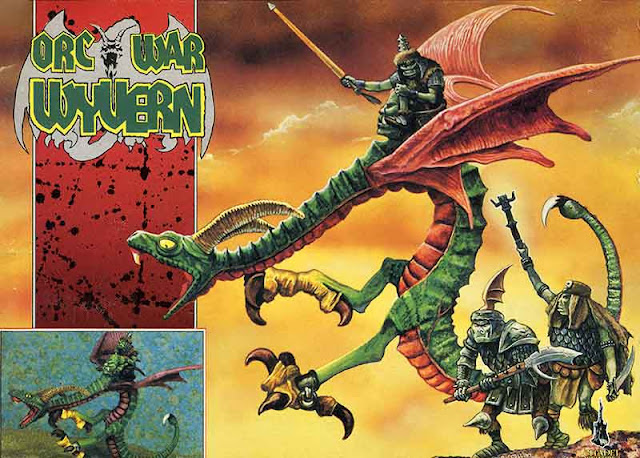 Yeeeessss!! look at this bad boy, one of the most iconic figures of the day.  Now I had put it together back in the day and covered it in thick paint and it looked dreadful and the parts were unpinned, heavy and never really stuck together well, he was covered in putty and just was awful, which is why he languished unloved in the bottom of my box. Seeing him looking so pitiful ignited something in me and I searched high and low for the rest of the bits, finding most but sadly not all, plus I started rounding up any straggler O&Gs (come on everybody has them!).  Enough were found that I could construct the Wyvern and give him a new rider (no idea if he came with the box set or if he's an old boar rider model...) and I built this out of it.. 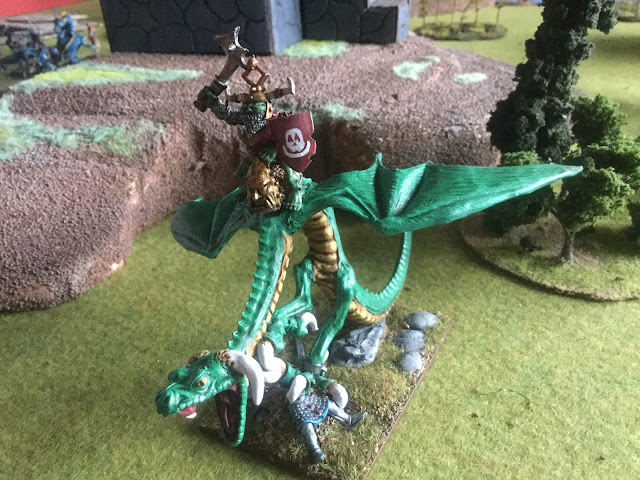 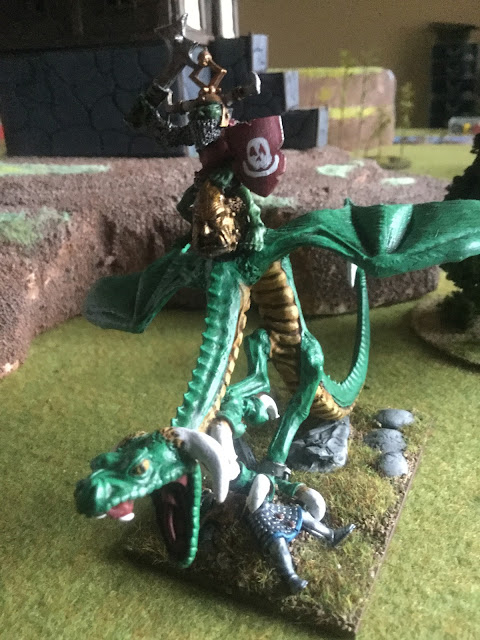 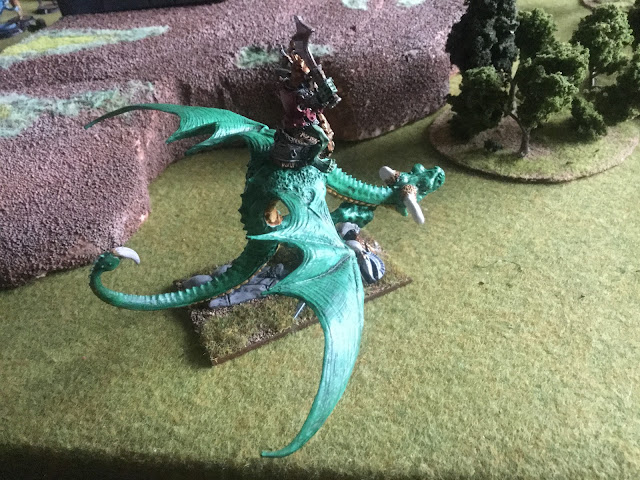 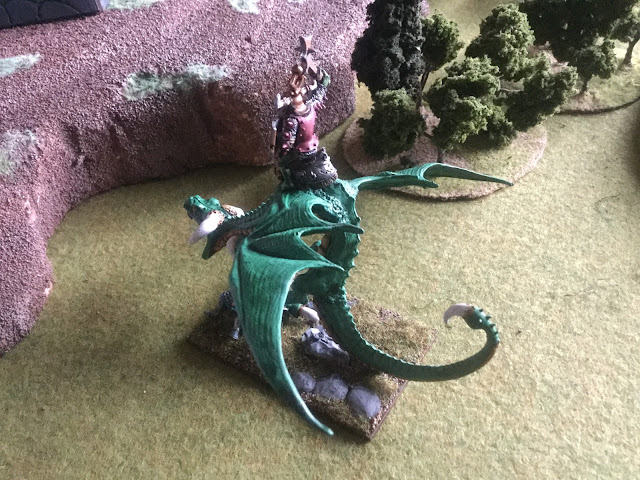 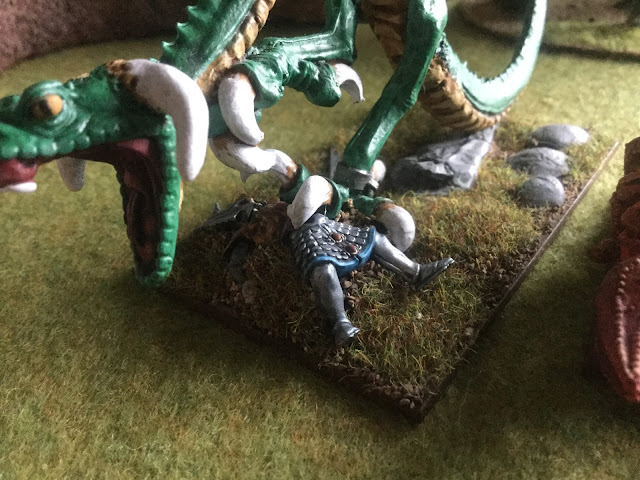 I have had to sculpt new horns as these were missing and built a base for him as the little lead one that was moulded to the figure is totally inadequate.  I wanted a more dramatic base so modelled the wyvern talons punching through the armoured corpse of a High elf.  I pinned all of the joints and sculpted them with milliput using the last 20 years worth of experience to finally do the piece some justice.

I do apologise for the lack of WIP pics for this guy and the one below as I started the figure over a year ago but never completely finished either...

Talking of which I have also just finished the leader of my Spider Riders, although I don't think he read the brief.... 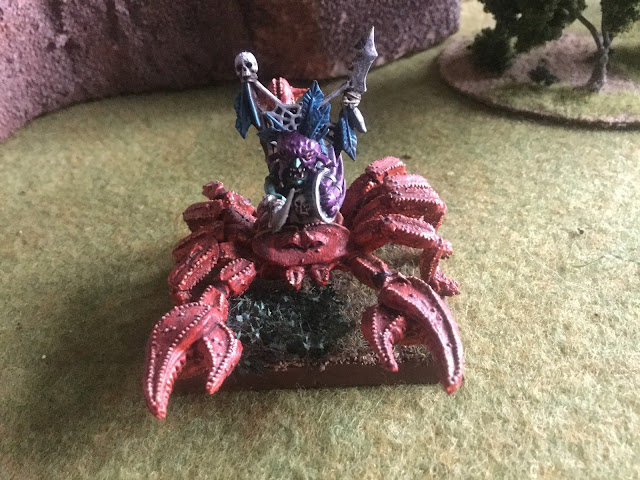 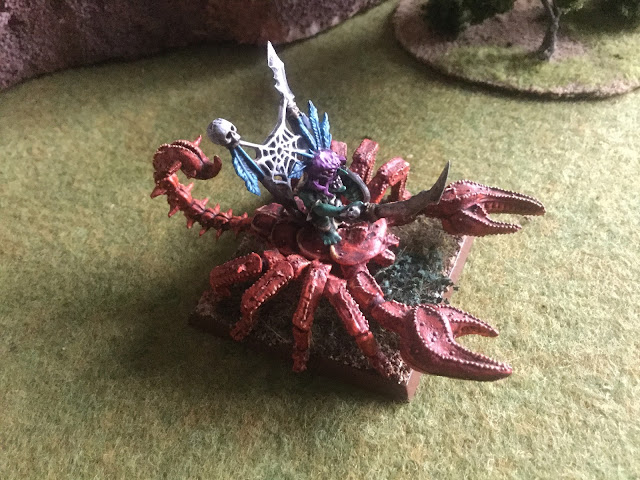 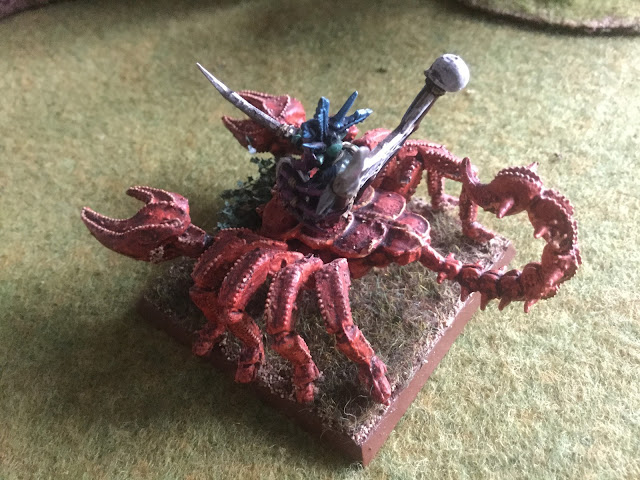 The giant scorpion used to be part of a conversion I did about 15 years ago for a Skaven army and had a ratman rider, however i never used him in games and it was to be fair a bit shit.....  After finding my Wyvern and getting some O&G mojo, I hit eBay and bought loads of used and cheap greenskins including two boxes of spider riders (by accident, I only wanted one!).  I wanted something a bit special and standout so "Niblit Snotfeather" and his faithful mount "Stinga" was conceived. 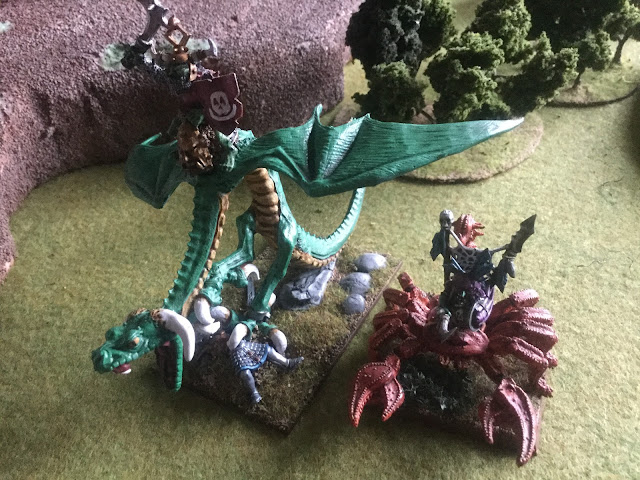 So thats it, turned out to be bit more than a filler post and I hope not too boring for those who aren't fans of the evil empire of GW (I only consider it a filler post as i no longer really do much WFB).  But for those of you who are interested in how the project is going I will periodically update you on it's progress.  To give you an idea of how slow it's going I started these models about a year ago and finished them totally last week... I've only completed 2 other units..... no so much a WAARRRRGGGGHHHHH!! as a wooo....hahaha