Just a quick post before the weekend, I recently played a game of Bushido with Damon and it was great (obviously!) but it did highlight the need for more Ki tokens from me as we were a little light.  There were various ways we could have got around this with dice markers etc but I quite like having visible tokens without fiddling around.  Now I know there are a lot of gamers who get turned off by token heavy games and that's fine and you can get away with not doing that in Bushido but I'm not into notepads or trying to use my rather shoddy goldfish like memory to remember if my individual warrior ran or has been poisoned etc, so I quite like tokens and I'm not too worried as long as it doesn't get in the way of the game.

With this in mind when, on a Bushido FB page,  a fellow gamer mentioned the company "Blotz" as a source for cheap tokens I had a little mooch over to their website. Now I've already made "tired" and "exhausted" tokens as well as some "Ki" tokens out of poker chips I bought at Salute for that purpose, so I didn't need them (except to bolster the Ki ones as stated) but I did want some for the other statuses. Each status pack costs £1 for 5 or £1.50 for 10 and come in whatever colour you want, I went for different colours for each one so it's easier to differentiate between them in the bag. I'm not going to use them all with the factions or minis that I currently have but I have every intention of collecting more and more of the various factions over the coming years so bought the whole collection and it cost just £13... Sweet.

I like these because they are fairly unobtrusive and just sit around the lip of the base so very easy to see who has what.  All you have do is peel off the protective plastic which is a minor irritant and with the white ones I used watered down grey acrylic paint and dragged the brush across the etched writing before wiping off the excess - just to emphasise the writing, it took all of 2 minutes. 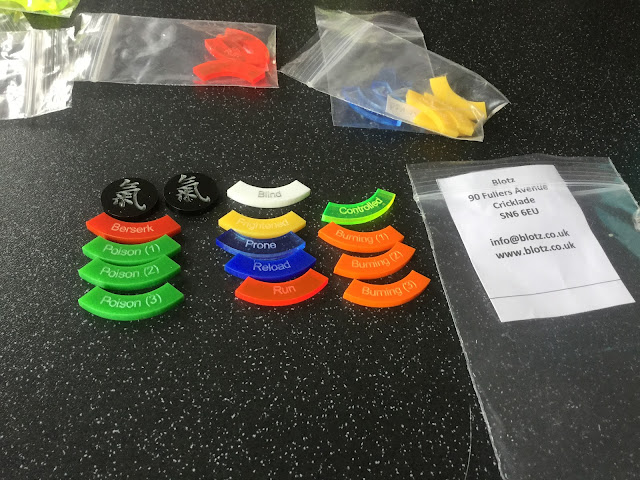 That's it for this week folks
Hope you enjoy
dGG