This is the last in my series of Blood Bowl teams this year, but have no fear there will be more coming as I've backed a Norse Team KS due to land mid 2020 and I will be getting a Xmas treat involving the halflings.

The Angels are another all female elf team, this time Elven Union.   This is taken from Wiki

"The story of High Elves in Blood Bowl is a long and interesting one, full of juicy scandals and long-running disputes between larger-than-life characters. One of the biggest scandals in their history came in the years following the collapse of the NAF, when teams suddenly found themselves indebted to noble backers from the Elven kingdoms, who- thanks to a lot of small print- began to make their way onto the pitch, shunting established players to the sidelines. Outrage abounded among players and fans alike, and it was only a matter of time before someone did something about it.
When it finally happened, the formation of the Elven Union came as a surprise to no one. A loose federation of Elven teams, made primarily of disgruntled former High Elf players, but including the odd Wood Elf and even Dark Elf, the Union seeks to repair the damaged reputation of Elven teams and show that they can take Blood Bowl seriously. What the teams lack in funding, they make up for with experience and stubborn determination."


Sadly, I didn't have enough time to take pictures for you, as Damon has whisked them away to practice with them for the tournament in January. So you just get the ones I did just after finishing the main team. 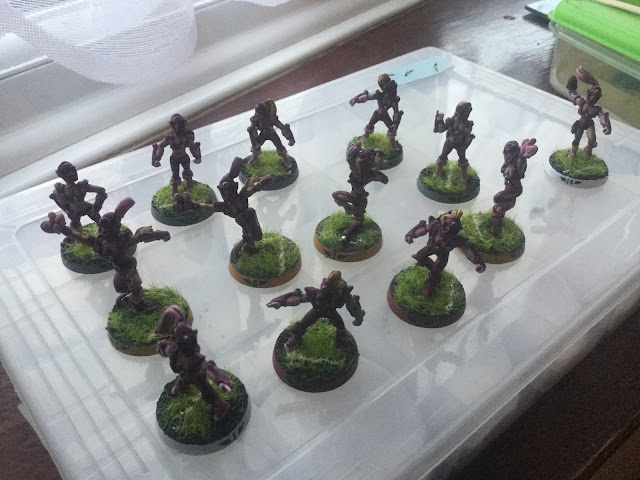 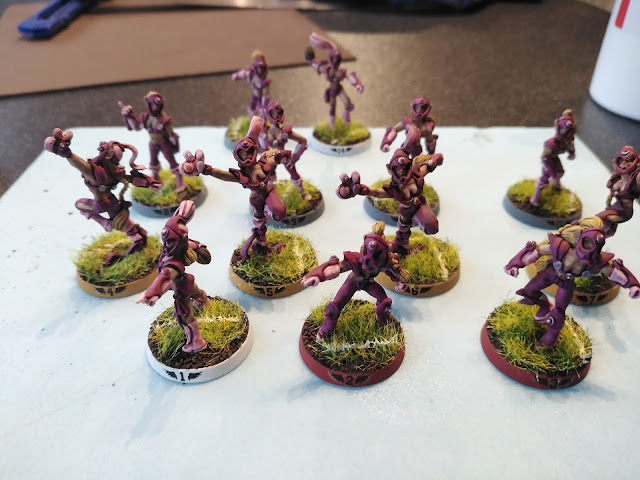 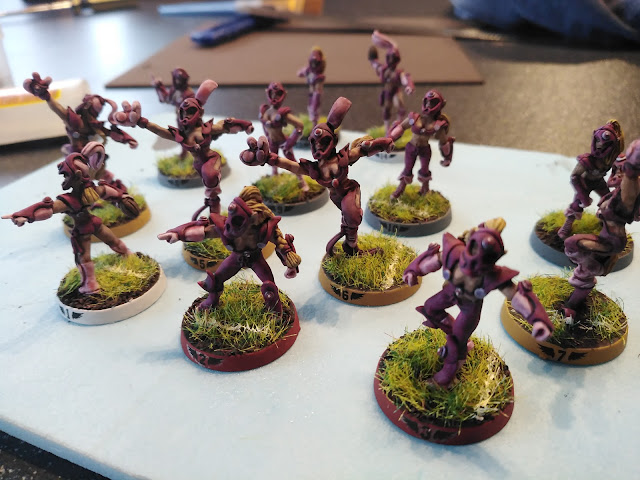 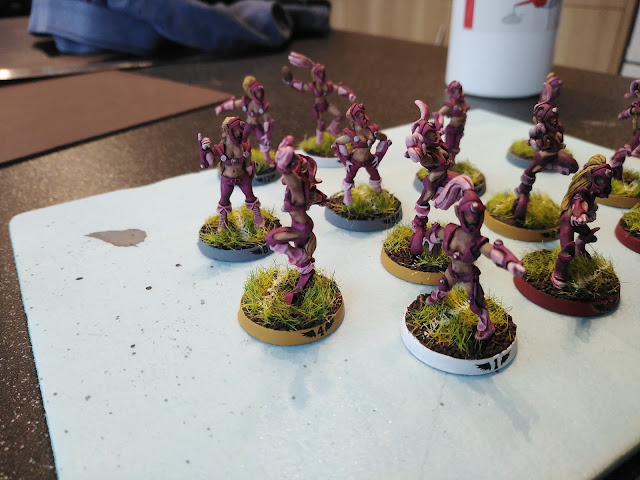 Now the very sharp-eyed among you may remember this team from the beginning of last year - https://dagobbosgrotto.blogspot.com/2018/01/the-alzuri-angels.html and think this is just a recycled post... and you would be kind of correct. In the last post, I had numbered the minis incorrectly, the bases were awful and I only had 2 catchers painted.  So now was the time to dust them off, paint the newbies and re-highlight the old ones before basing the minis as a team.

The miniatures are from Shadowforge and I bought them many years ago. Scale wise they are 28mm and are really nice minis - detail wise and to paint. I bought the main team as I said years ago, but in order to fit the new roster I needed to pick up a couple of catchers and these are the only duplicates in the team. I decided to go for a pink/purple and white strip which looks kinda jazzy and painted the base rims in the colours recommended in BB ed 2 to identify positions.  There are some other back room minis for this team which I bought with the extra catchers, including cheerleaders, apothecary and assistant coach, but they are on the paint table so will have to be for another time.

That's it for me this year.  I won't be posting until 2020 now, so please have a great Christmas and I hope you get the toys that you wish for!