Rising Sun - on the table

Recently I managed to persuade (I just asked them really...) my board gaming group to join me in a game of Rising Sun, so I thought I'd post a little about the actual game play.


"Rising Sun is Eric Lang’s spiritual successor to Blood Rage. Published by CMON it has been one of the most talked about games of 2018. Set in feudal Japan, with a heavy dose of mysticism and mythology, Rising Sun is an area control game that is not won through combat alone. Forging alliances, teamwork and deception all play a part over the course of a single year which will decide which of the five factions will dominate the land. The player with the most victory points is the winner.
The board is a beautiful artistic representation of Japan, highly stylised yet easy to understand. Tokens and cards all follow suit with a distinct look.
Rising Sun comes with five asymmetrical factions with their own set of unique miniatures in three different forms. The Daimyo is the most powerful unit in your faction and is harder for other players to disrupt. The Shinto units are able to move off the map and go pray to one of four random Kami gods at the top of the board. At certain points during the year, if you have more Shinto praying for a particular god than another player, you gain a special ability. Finally the Bushi are your main warriors to battle other players or hold a region.
Over the course of the in-game year, moving through spring, summer and autumn, players make can decisions to ally with other players for mutual benefit or betray them entirely. Factions can be upgraded with new special abilities or gain access to a horde of awesome Monsters.
Combat is determined with a blind bidding mechanic, where gained coins through the season are spent on claiming particular bonus abilities prior to the main battle even takes place. All coins are placed in secret and then revealed. For example, the player that spends the most gold on capturing an enemy unit will be able to take another faction unit hostage from the battle, which could lead to power shifting into their favour. Honour is also an important aspect. If a faction has a higher honour rating than another, they will break all ties should a draw take place. Factions move up and down the honour track over the course of the game. Of course, some deceitful monsters also get more powerful if you have lower honour than your enemy…"
I couldn't have said it any better. So we set the game up, which takes quite a bit of time unfortunately as there are quite a few components. I took the role of the Turtle Clan (green, naturally), which comes with a special rule meaning I can take my stronghold with me, like a mobile fortress and add it to my force (power). 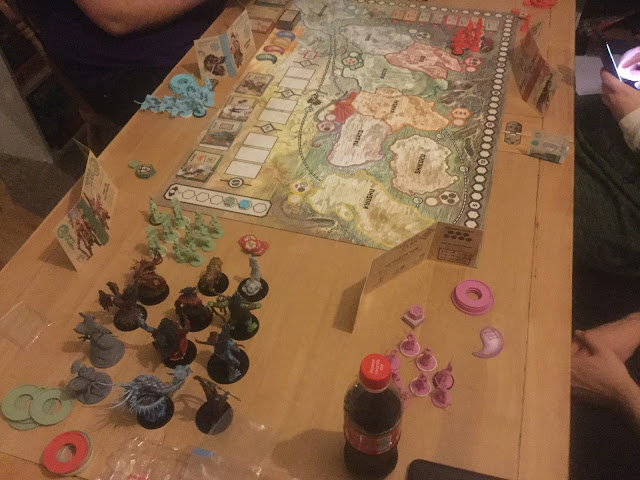 The game has quite a large footprint, covering a 5' by 3' table easily. 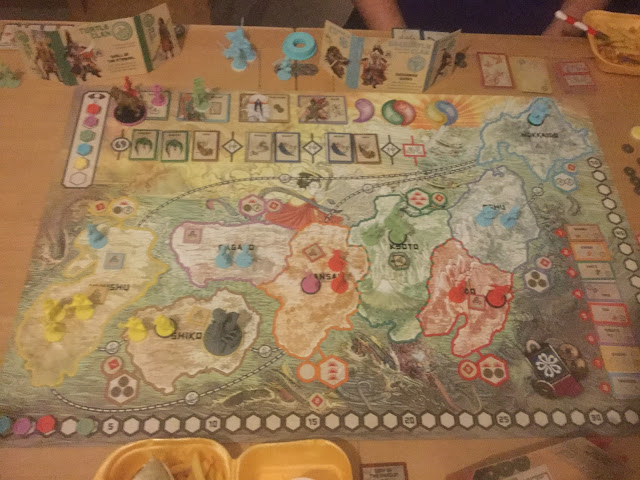 As there were five players, there would be fraught alliances being made with someone losing out each season.  Being in an alliance brings advantages to both players when it comes to taking actions, however going solo isn't all that bad as certain cards and actions such as "betrayal" mean that you can take advantage of the lack of allies.  The game itself has a lovely way of representing alliances with a colourful Ying/Yang  half for each colour that fit together (top right of the picture). My clan started on the green province and during the game I would recruit and move all over the board. 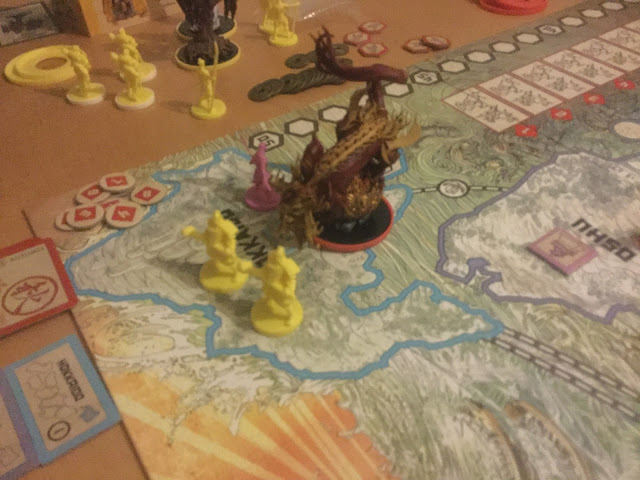 Jess's Earth Dragon smashes down among the bushi of Jayde and Rob. 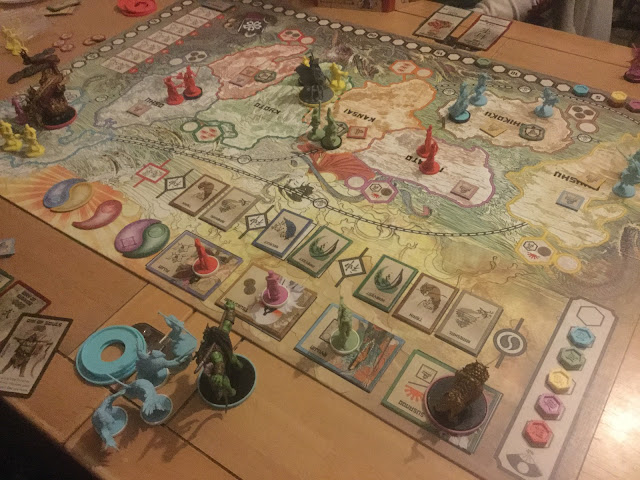 Actions are taken via "political mandates" chosen by each player in turn including recruiting monsters, enhancing Daimyo's and praying to the Kami.  Rising Sun also has an honour track (bottom right) which is used to split ties and inform actions and can change based on honourable actions like Seppuku or dishonourable actions like betrayal... 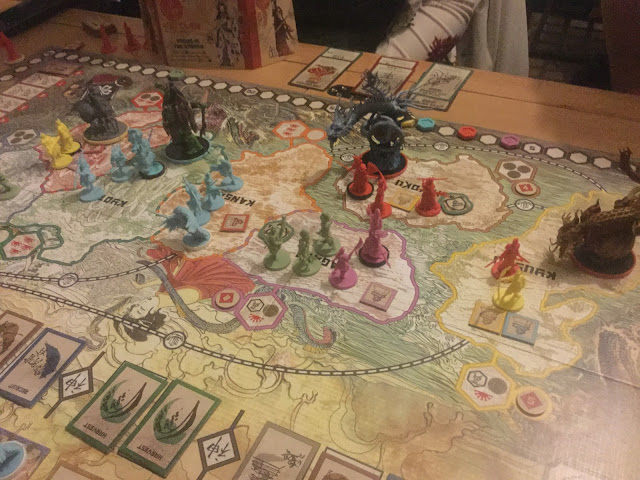 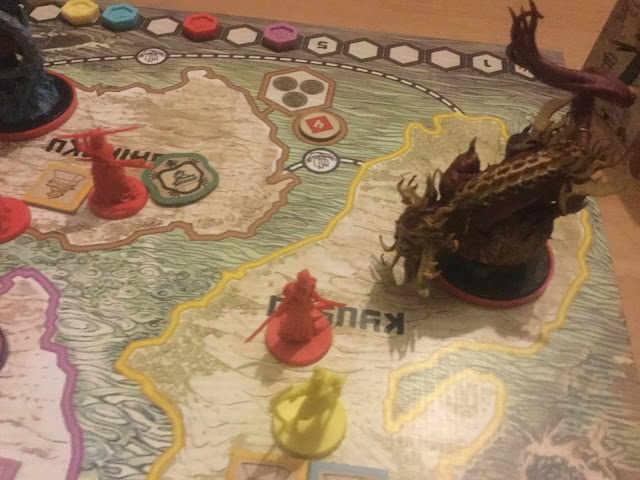 Jess had 2 dragons in the end!! 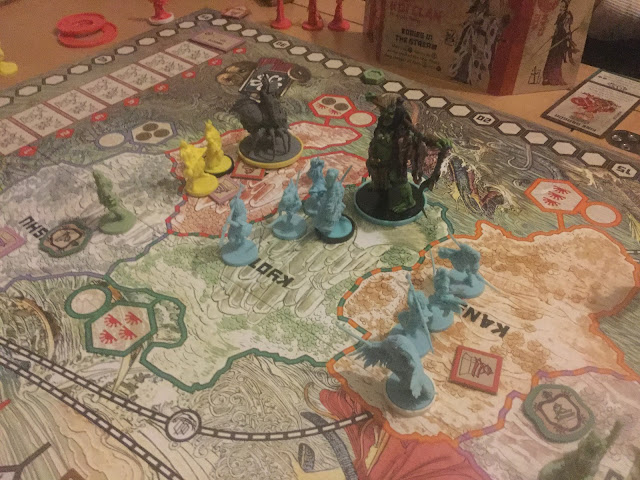 I really, really like this game!  I love the Japanese theme, I love the "miniatures" but mostly I love the intrigue and game play. Yes, you fight battles (sort of) but actually you don't need to, Darius came a respectable second place without fighting a single battle.