One of the expansions that I received for the game "Rising Sun" was the Daimyo Invasion box.  This added a further 2x clans to be added to those available and to increase the number of players allowable to 6.  The 2 new clans aren't allowed to use the Monsters from the core set like the others, instead they use the "Lucky Gods".

I'm not entirely sure what the reasoning behind that theory is, although I suspect it's just a marketing ploy.  However the minis are kinda cool and it does add a little extra gameplay so I have added them to the box.

Here are the first four... 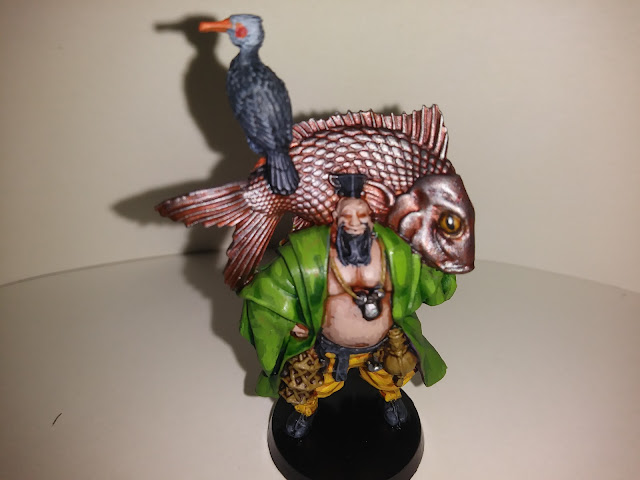 
From the period of the gods Izanami and Izanagi, Ebisu (恵比寿) is the only one whose origins are purely Japanese. He is the god of prosperity and wealth in business, and of plenitude and abundance in crops, cereals and food in general. He is the patron of fishermen and therefore is represented with fishermen's costumes such as a typical hat, a fishing rod in his right hand and a fish that can be either a carp, a hake, a codfish or a sea bass, or any large fish, in general, that symbolize abundance in meals (such as a feast or banquet). It is now common to see his figure in restaurants where fish is served in great quantities or in household kitchens.[1] 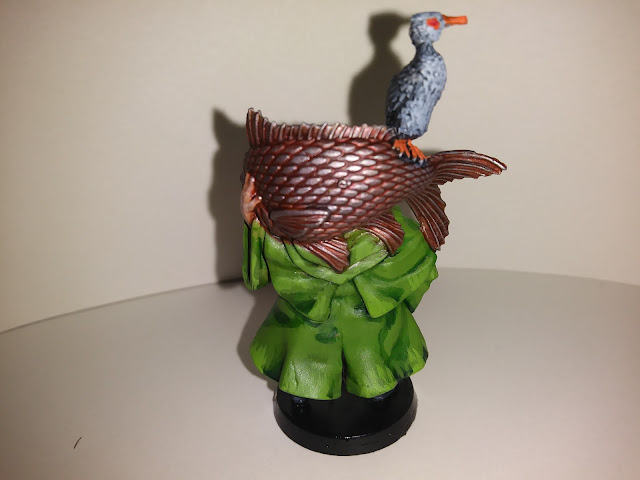 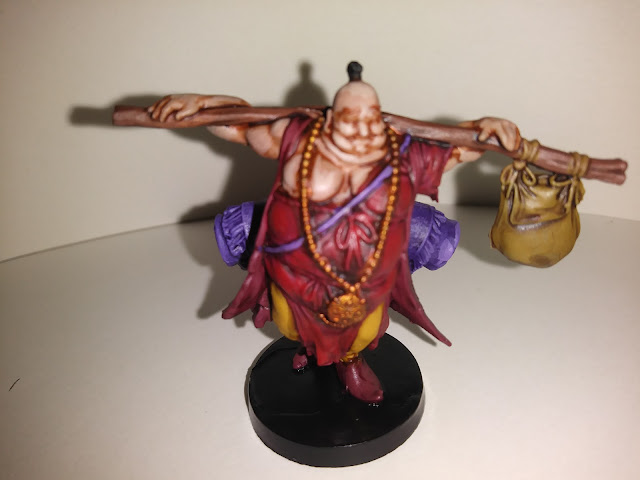 
Hotei (布袋) is the god of fortune, guardian of the children, patron of diviners and barmen, and also the god of popularity. He is depicted as a fat, smiling, bald man with a curly moustache. He always appears half naked, as his clothes are not wide enough to cover his enormous belly. He blessed the Chinese, and they nicknamed him "Cho-Tei-Shi" or "Ho-Tei-Shi", which means ‘bag of old clothes’.
Hotei was a Zen priest, but his appearance and some of his actions were against their moral condition: his appearance made him look like quite a mischievous person and he had no fixed place to sleep.
He carries a bag on his shoulders which is, according to the beliefs, loaded with fortunes for those who believe in his virtues. Hotei's traits and virtue are contentment, magnanimous and happiness.
The legend explains that Hotei was a real person. His Chinese name was Kaishi, and even though it seems that his date of birth is unknown, his death is recorded as March 916.
The Japanese began to believe in Hotei during the Edo era. The reason why the Japanese have such great respect for this god comes from a legend that says that, before the Zen Buddhism arrived to Japan, an alternative Buddhist thought was extended by a priest of dubious aesthetic, who actually was a manifestation of Miroku. Miroku was the patron of those who could not be saved by the beliefs of Buddha, and Hotei was later perceived and accepted by the Japanese as a second Miroku.[1] 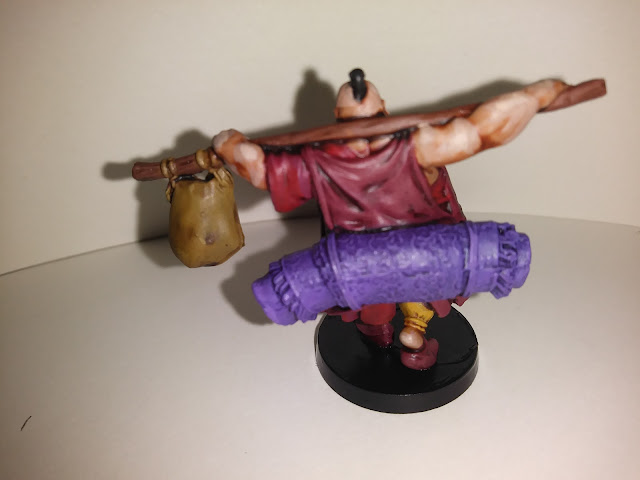 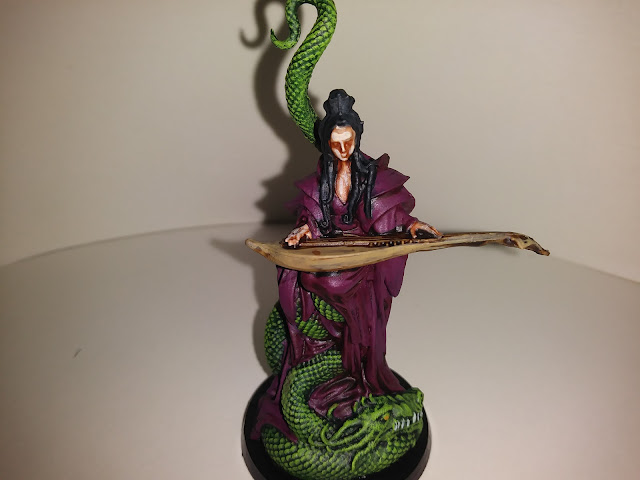 
Benzaiten's (弁才天 or 弁財天) origin is found in Hinduism, as she comes from the Hindu goddess Saraswati. While being the only female Fukujin in the modern grouping of seven Fukujin, she is named in various ways: Benzaiten (弁才天), Benten (弁天), Bentensama (弁天様), or Benzaitennyo (弁才天女). When she was adapted from Buddhism, she was given the attributes of financial fortune, talent, beauty and music among others. In many occasions her figure appears in the "Torii" (entrance of the temples). It is common to see her in the Japanese temples. She is represented as a smart, beautiful woman with all the aforementioned attributes. She carries a biwa, a Japanese traditional lute-like instrument and is normally accompanied by a white snake. She is the patron of artists, writers, dancers, and geisha, among others.[1] 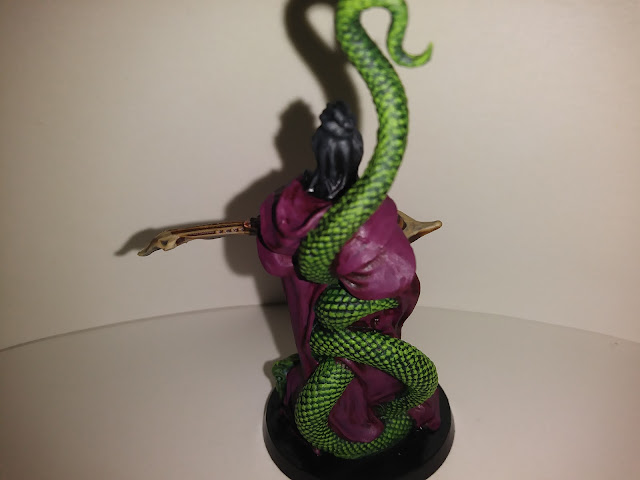 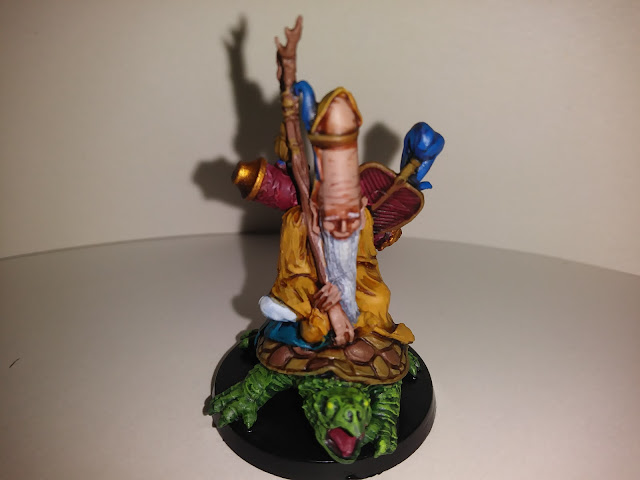 Main article: Fukurokuju
The god Fukurokuju (福禄寿), another Shichifukujin, has his origins in China. It is believed that he used to be a hermit during the Chinese Song dynasty, distinguished for being a reincarnation of the Taoist god Hsuan-wu. He is the god of wisdom, luck, longevity, wealth and happiness. This god receives certain credits, such as being one of the Chinese philosophers who could live without eating (breatharian). Moreover, he is the only god who was said to have the ability to resurrect the dead. Fukurokuju is characterized by the size of his head, being almost as large as the size of his whole body, and is represented wearing traditional Chinese costumes. He normally carries a cane in one hand and in the other a scroll with writings about the world. He is usually accompanied by a turtle, a crow or a deer, animals that are frequently used in Japan to symbolize a long life. It is also said that he likes to play chess, and so he is also credited for being the patron of chess players.[1] The characteristics of Fukurokuju and Jurōjin bear tremendous overlap as they both trace back to the Chinese Taoist deity Nánjílǎorén (南极老人), which is why Fukurokuju's position is sometimes granted instead to the goddess Kichijōten, as in the Butsuzōzui compendium of 1783.[5] 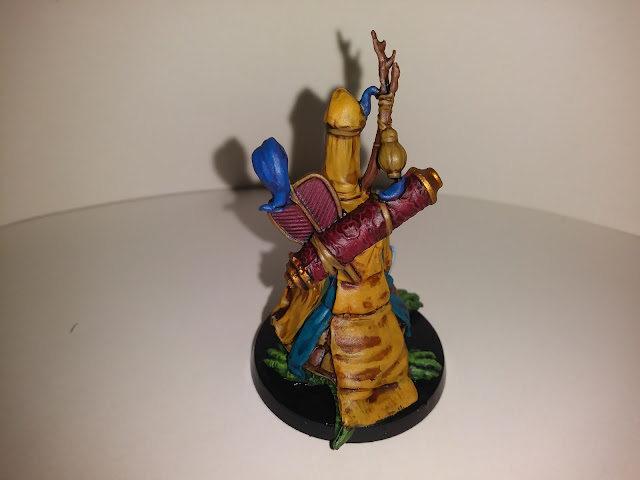 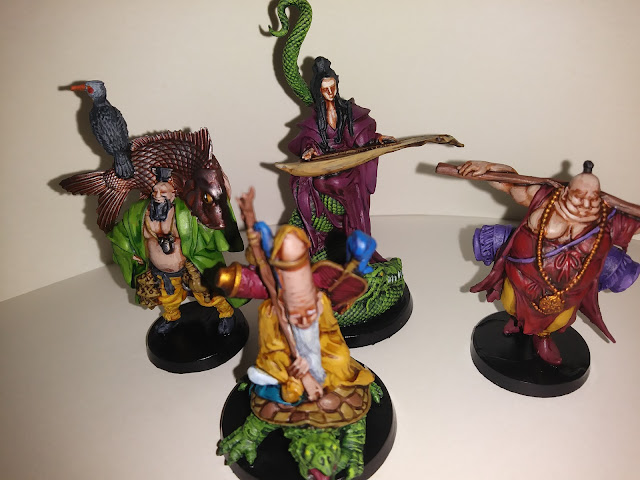