ATZ - an English Adventure - The package (2)

Anna swept her gaze left to right, taking in the sight before her. The devastation from Daenerys "The Mother of All Storms" and the subsequent outbreak of a viral illness that had caused the citizens of Thanet to become violent cannibals, was catastrophic.  The big diesel engine of the ambulance growled as she nervously tapped her right foot on the accelerator of the 5.5 tonne vehicle.  With each tap another pair of milky white eyes turned and began a slow lurch toward her, the uncoordinated gait characteristic of the "zombie" like creatures that were, at one time her fellow human beings. Slipping the truck into gear she eased toward Nash Road, a small run of houses lining Ellington Park, her eyes trying to take in all of the many hiding places the D-Subs, as she knew they were being called, could lurk.  All told seven of the beasts were heading her way, determined to feast on her flesh. 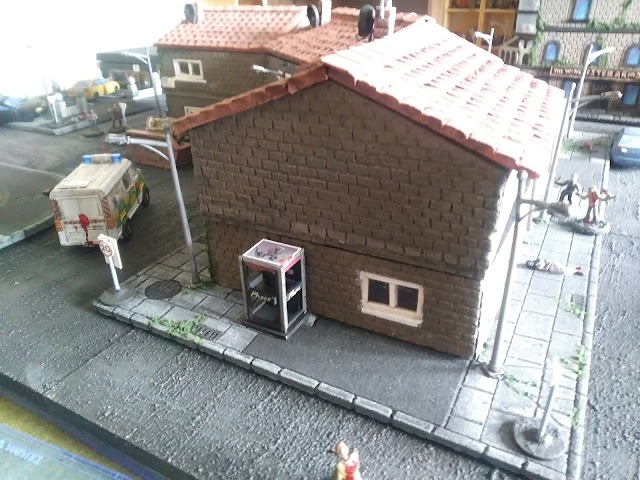 A glimpse of movement in her review mirror drew her attention, causing her foot to slip off the gas and the ambulance to slow to a virtual stop.  A tall figure, all dressed in black military style clothing including body armour and helmet, stepped from the middle house carrying a nasty looking assault rifle.  Three similar looking soldiers followed, as the first raised a hand to hail the young paramedic before she rolled by.  Anna did an almost double take, this was the first time she had seen the army on the streets since the troubles had started.  Relief flooded through her, this must be the start of the government's response and the rescue of the uninfected people of the blighted isle. A big smile started to grow across her face as she came to a complete stop, a risky move as more and more of the D-Subs were being drawn to the idling engine.

Sergeant Nick Doyle plastered a huge grin on his face and put on his best "friendly but competent" look.  The girl had to be taken if possible, eliminated if not, most importantly she needed to let them know the whereabouts of the package.  This had to look like a rescue, not an abduction in order to get the drop on her. With some quick hand signals, he sent Tomkins and Conti to the far side of the vehicle, tasking Dewbury to cover his own "six". Doyle slung his rifle over his back, a dangerous move considering the D-Subs that were bearing down on them, but he needed his hands free for the taser holstered at his waist. 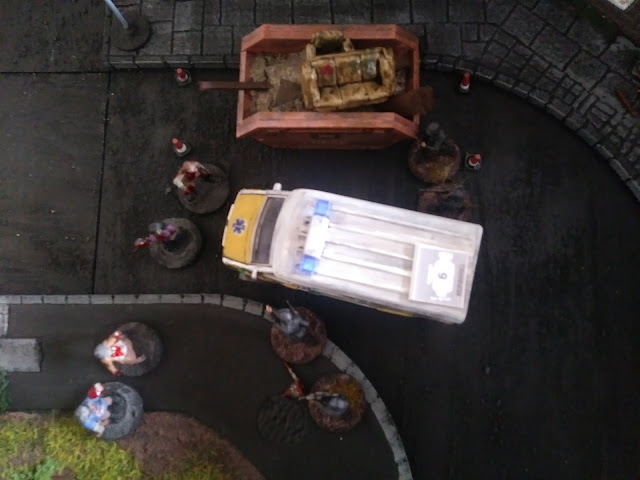 Anna jumped, as the soldiers opened fire at the oncoming zombies, causing two to spin around in a hail of bullets and drop to the ground. The paramedic winced at the noise of the automatic fire, it would surely draw even more of the beasts, but could see the effectiveness of the action.  Grateful for the intervention, she disengaged the auto-lock, barely flinching as the handsome soldier with the enormous smile opened the passenger door and leaned into the cab.

"Morning love" the sergeant drawled, his accent marking him as a northerner, most likely from Yorkshire. "Seems like you have a spot of bother 'ere, need some help?".  His wide grin faltered a little as he heard a dry click behind him and Conti's curse.

"I'm out Sarge" The dark-haired soldier added, unnecessarily it seemed. The glare sent the private's way was distinctly less friendly and followed by a few quick, choice words from the NCO made the younger man squirm, an odd sight for a fully kitted out warrior. Turning back to Anna, Doyle fixed the smile back in place with some effort, which became a bit easier as he spotted a bulky file poking out the top of a Tesco "bag for life".

Anna watched the exchange between the two soldiers and grew a little uneasy.  Long experience in the emergency services had sharpened already good instincts to a razor edge, the past few days only adding to that. Now she picked up on the subtle body language from the bulky man, a slight tilt of the head, the licking of his lips and tension in his shoulders as his gaze dropped to the bag in which Chris's medical file was contained. As he lifted his eyes, she saw a look of relief that was almost comical and was certainly palpable. Instincts flared, synapses fired off, dumping floods of adrenaline into her bloodstream.  Years of hockey drills had honed her reflexes and her hand shot out to grab the handle of the bat by her side. As quick as she was though, the sarge was quicker and his own hand dropped to his waist, lifting the taser.

Doyle depressed the trigger and watched as the tiny darts hit the paramedic in the centre of her chest before dumping 50,000 volts at 26 watts through her body.  The young woman's torso arched as her limbs spasmed, her muscles contracted to their full extent as the electricity smashed through her.  Anna's heart temporarily stopped as the SV node overloaded and the cardiac tissue flexed and did not release.  Her brain, overwhelmed by the power of the weapon shut down in an effort to restart the bodies autonomous functions and keep itself from becoming hypoxic.   As Doyle eased off the trigger, the flow of electricity instantly stopped and Anna slumped into the chair with a sigh. Reaching into the vehicle he pulled her into the passenger seat and fastened zip ties to her wrists and ankles.

"SARGE!" The shout from Tomkins caused him to look up from his task, just in time to see D-Subs closing in on their position.  One of the infected, grievous wounds caused by the squaddies ignored, reached out for Doyle just as another round tore through its lower mandible and lifting it from its feet.  The other soldiers lifted assault rifles to their shoulders and began to whittle down the approaching creatures, widening the gap between them but drawing in more of the D-Subs with each crack of the high-powered weapons.  Making a snap decision he clambered passed the unconscious medic and into the driver seat, calling to the others to get in the vehicle – it was time to get the hell out of here!