ATZ - an English Adventure - The package (1)


I hope you enjoyed the intros to this episode/encounter in my ATZ campaign.  I also hope it will have set you up for what is to come.  Once again the AAR will be written narratively, so will not have any of the rules prompts or explanations, it will also condense some of the action or indeed stretch some of it to incorporate the story, however it will remain true to the action that will happen within the game even if that is adverse to my heroes!

Why am I writing this intro in this tense? because I haven't played the game yet and will write up a post after playing a chunk of the game.  This means that I have little idea of how it will all pan out! exciting huh? :-)

So to get some background on this scenario then. Hopefully you have been following the story so far, if not why not?!? You can find it here.

First up we have Anna...

Anna "Putters" Parker has had a very tough intro to the zompoc! her fiance Chris was studied extensively after developing a weird, delayed reaction to the virus, he then turned into a homicidal killing machine that tore the D-Subs to shreds before falling to a horde of the critters. This has led to Anna confirming her "survivor" status in ATZ parlance, she has also managed an increase in her stats.  As i'm using Bryan's variation of the rules and split the mighty ATZ Rep stat I could have increased one of the other stats but decided to up her Rep from 3 to 4. She's still wielding a baseball bat, that she found in a house earlier and she's still driving an ambulance that she had been driving immediately after Storm Daenerys. So here's her upgraded card. 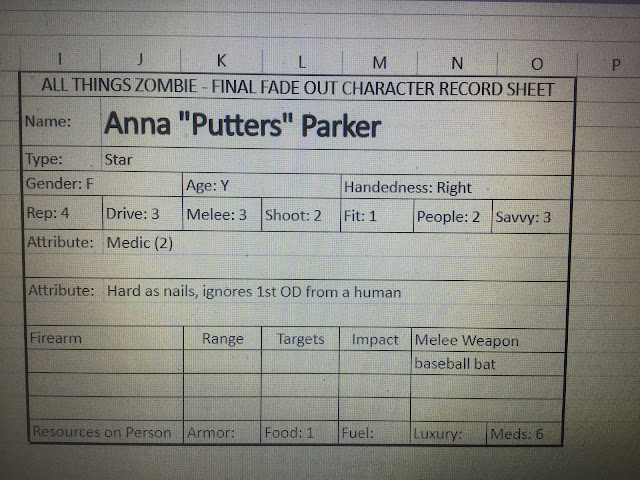 The board I will be using is based on the one I took to PAW with only minor changes to the street furniture, mostly because I haven't had time to change it but also because I haven't really played any game on it, so want to try it out!! 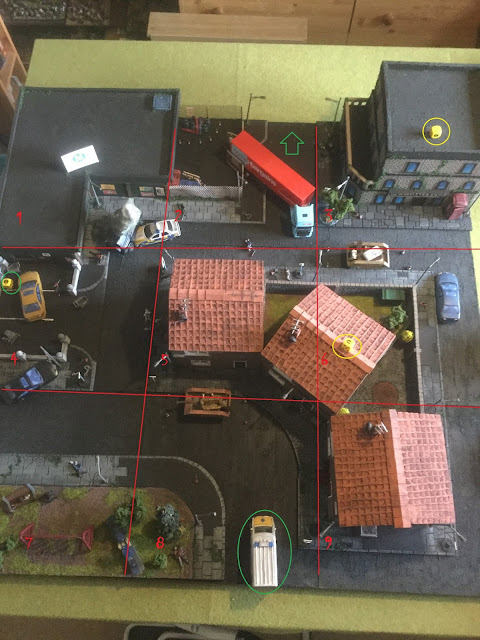 Divided into the usual 9 sections, Anna will enter in at section 8, in her ambulance highlighted in a green circle.  Her objective is to simply exit the board at section 2, highlighted by the green arrow, if this happens the encounter is a success.  There are three PEFs on the board but rather than being a random roll on the encounter chart in the rule book, they will be pre-loaded in order to represent the individual story threads that we've been following this week.

However we won't know which one it will be until they are revealed as I don't want to influence the way I move Anna...

Each PEF will represent one of the following - 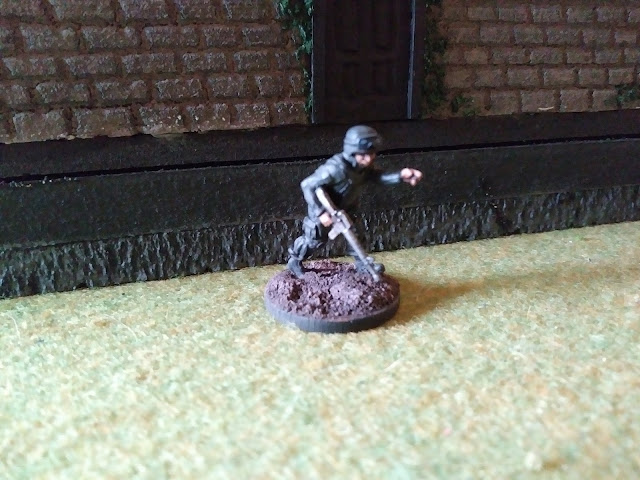 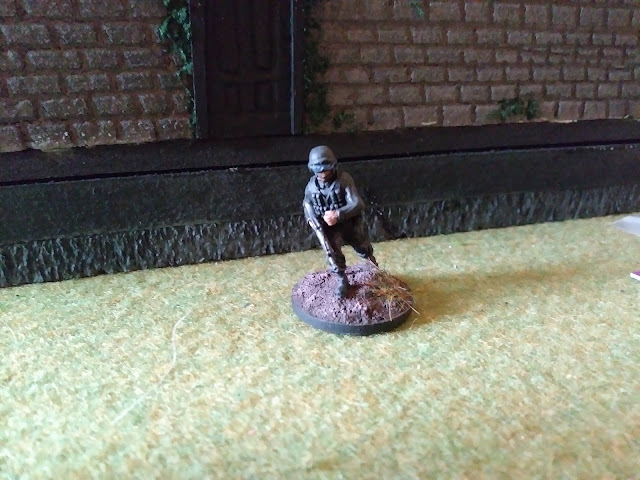 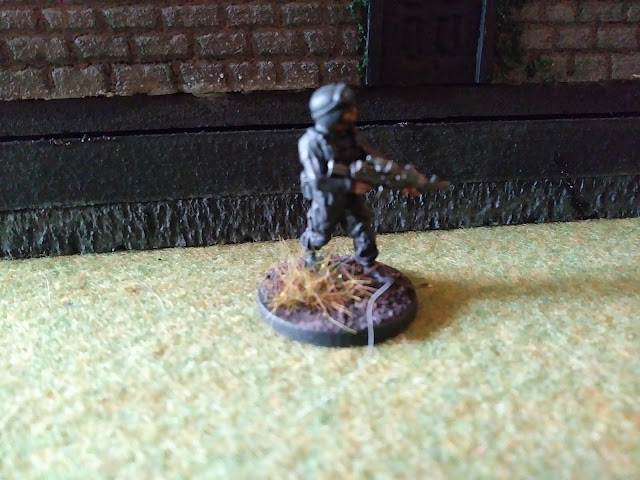 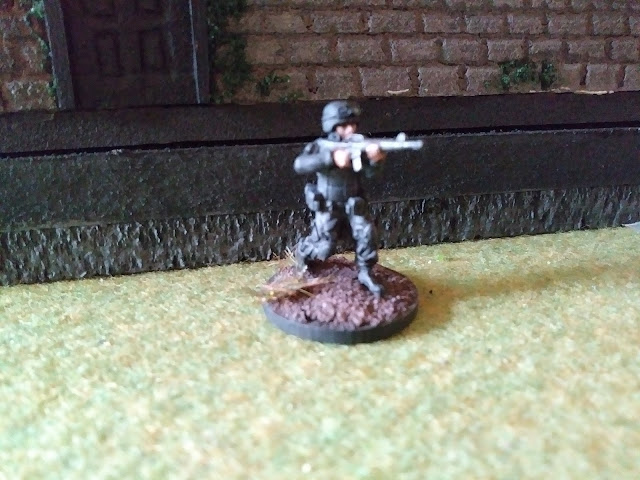 The team will attempt to capture Anna if she is on her own and it is possible. To do this Sgt Boyle has been issued with a taser which has stats of:- range 3" Target 1 Impact 1. If the shot hits and is over the Impact score of 1 then the target is stunned and considered immobile for d3 turns.  They will then ziptie Anna and move to the RV.  They cannot fast move with Anna ziptied. When the team first encounter Anna they will "meet and greet". If the sgt gets more successes he will appear friendly in order to get closer to Anna and deploy the taser. If Anna gets more successes she will suspect something is up and can "walk the walk"

If it is impossible to capture Anna then they have orders to terminate her on sight and any witnesses, opening fire with their assault rifles.  One of the team must be in btb in order to search for the package and that must be retrieved.  The team will not withdraw unless they have the package or Sgt Boyle is killed. If they retrieve the package or capture Anna they must RV with their chopper which will land on the roof of the supermarket for extraction.

Gobbo - Gobbo will be accompanied by his daughter Astrid, who are scavving on foot for supplies in the local area. 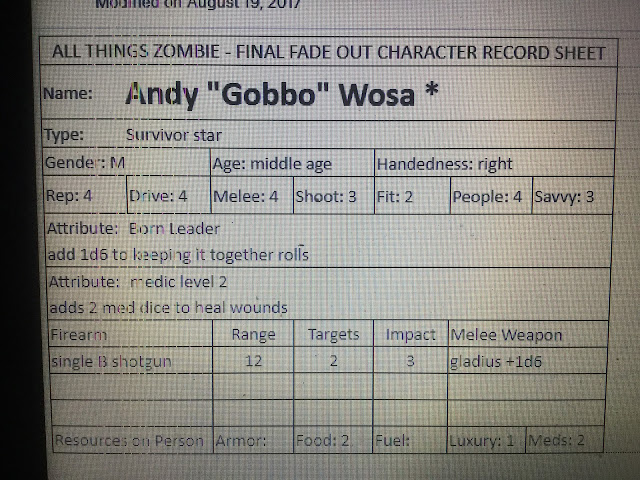 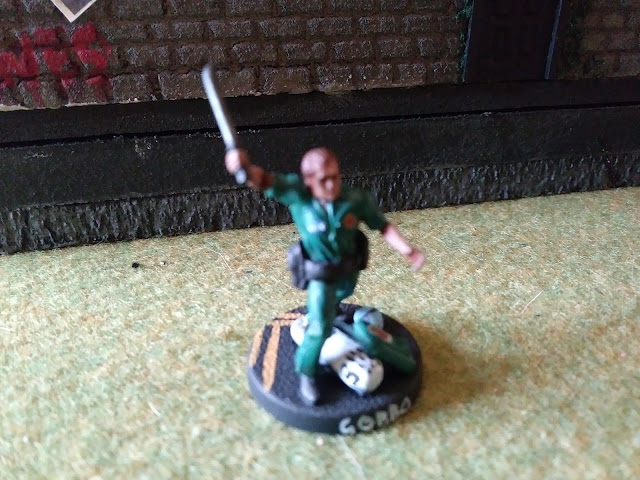 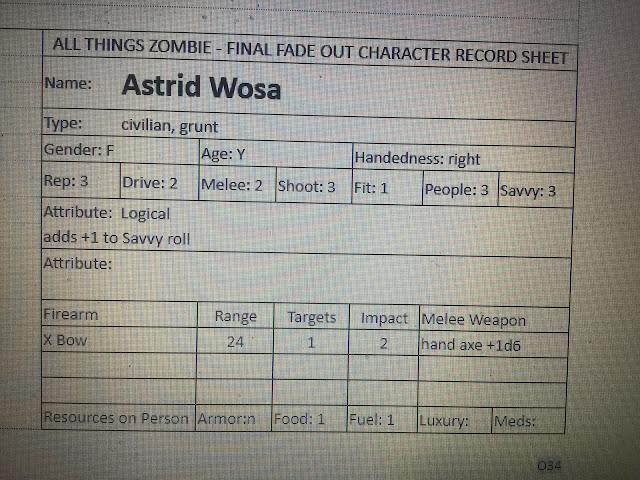 As Gobbo is/was Anna's crewmate, there is no need to "meet and greet" they will automatically join forces and escape the board from the nearest exit if Anna is in her ambulance or via the exit by the Winchester Arms pub at the corner of section 3 if she is on foot. If Anna exits with Gobbo the encounter is a success.  If the strike team have captured Anna in LoS of Gobbo he will attempt a rescue if possible.

April Nillson - April is on foot in the area, looking for Anna at the behest of her cameraman "Booby" Bobby.  During his most unlikely radio message, he has managed to persuade April to locate and warn Anna of the strike team and it's sinister mission.  April relented mostly because of the huge story she can scoop - D-sub viruses, sinister government agencies, science experiments!!! She is however, also at heart a decent human being and the thought of a young paramedic being butchered to further a government agenda appalls her. If she encounters Anna before the strike team she will have to "meet and greet" as normal with successes meaning she has convinced the paramedic of her sincerity and she will warn Anna about the strike team and Anna will not have to "meet and greet" the team, instead she can go straight to insight and "walk the walk".  If she encounters her afterward she will try to join forces with her in order to get the scoop.  she will not however try to rescue a captured Anna by assaulting the strike team, she may however try to help her if its possible. 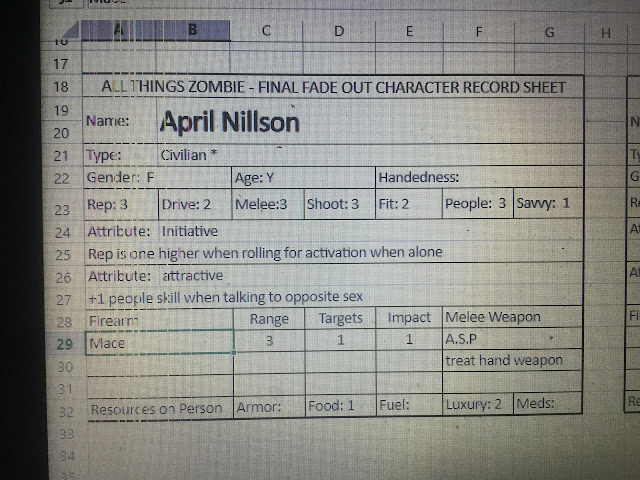 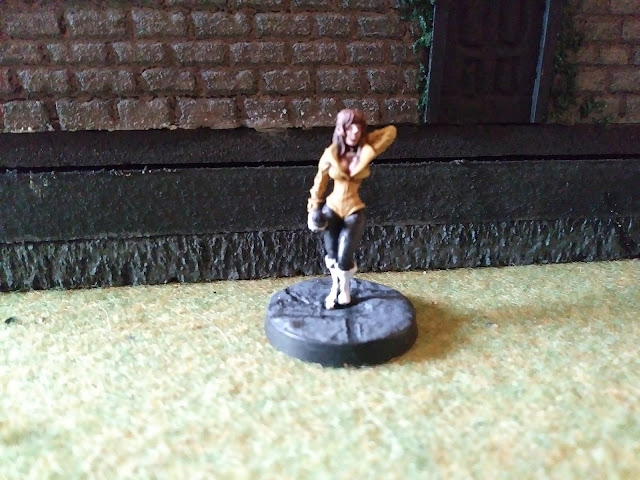 The encounter will take place in an Urban setting so zombies will generate on 4+ following noise and the Encounter Rating starts at 5.