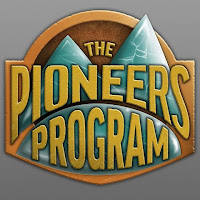 So being a massive Bushido enthusiast (pfft, no really!), when I saw that the makers of Bushido – GCT Studios were producing a board game I was more than interested. A gaming buddy of mine had bought the ‘Rise of the Kage’ and its expansion ‘Dockyards of Ryu’, which were a cross between a board game and a miniatures based wargames and I was dying to play it, but real life gets in the way and my gaming time was under severe limitation so the main skirmish game remained the focus. In the meantime GCT launch their Kickstarter for the new board game – ‘The Pioneer Program’, a post apocalypse resource builder type set up.  Post Apocalypse you say? Count me in!! Click goes the internet as I back my first but, I'm sure not my last KS project


Fast forward to Salute! 2017. The largest wargaming trade show in the U.K. and as promised the box is sitting at the GCT Studios stand, all shiny and pretty and waiting to be torn open in a frenzy of gaming goodness – only for real life to raise its weary head again and remind me I have to finish my degree off before I can indulge in starting new projects…… sad face emoji.

Fast forward again to July and I'm coming to the end of my degree, all of my assignments are in and I'm looking forward to more game time, i've started painting my newest Bushido faction (man you guys are gonna love it too!) and then a board game club pops its head above the parapet run by a good lad, who's bringing those fringe board games, you know the ones - those cool games that are a cross between miniature wargames and the more traditional setup - yeah those ones!  This week I popped down with The Pioneer Program, first I had to unbox it and I recorded that for you to see and the link is below:

Anyway to the review then, I don't need to go through the components as you can see them on the video so I'll go straight to the concept.

A post-apocalyptic, town building board game for 3-6 players. Grow your town, search the wastes and fight to defend what is yours!


That was from the Kickstarter when it was launched. This was the storyboard....

You have been chosen by the Arc to lead a new town and rebuild humanity. Plan, build, venture into the wastes or complete research on your harsh new world. Actions are limited and you need to choose wisely how to spend them. Each round players recruit a new survivor to support them, each brings their own strengths and selecting carefully is important. As is gaining turn order to allow you to choose your survivor first and make actions sooner rather than later.
Grow too quickly and you may face unwanted attention from the wastes. Balancing the size of your town with food production and defensive capabilities is essential and made all the more difficult by hordes of Viralz, the newly evolved race of Ascendants or even a raid from a fellow Pioneer.

Ok so boxes that get ticked straight away -

Right so I did say I'm not going to talk about the components but i will talk about the look of the game.  The artwork is bright and colourful in a delightful cartoony way, this is really appealing to me rather than a serious or realistic art that would take some of the light, fun aspect away from the game.

Setting the game up was initially quite complicated as there are a few decks of cards, tokens representing food, coin and responses as well as a couple of others for turns, victory points, initiative and random game length markers. But actually once you get set up it all kind of makes sense and doesn't reflect the simplicity of the rules. 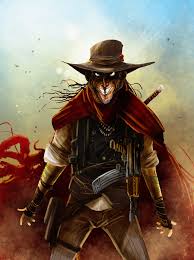 Onto the rules then, the best bit is that the rule book is only 6 pages long.  Hey that's quite a few pages for a board game isn't it? Well yeah I guess so, but most of the space is actually taken up with examples on how the game is set up and how the turn works in practice.  This was really helpful in taking this (board) game novice through set-up and the initial turns until we got into the swing of things.

First up there is a central board which houses the common pieces that all players can interact with, buying structures to build their settlement and track how the game is progressing.

There are 4 decks of cards - survivor deck, wastes deck, market deck and project deck and they are key to how the game is played and they sit on this part of the board.

Each player gets their own board which tracks the progress of their settlement, how many structures they have, the different personalities and items that add bonuses to your resources or to your combat rolls (yes there is a combat element to the game, you can raid other settlements or could cause your opponents to defend themselves against an attack from the Viralz).  Right at the beginning of each turn, you draw to see which survivor will help you through your turn and again add bonuses to your rolls or resources.

The main concept of the game is to build your settlement and this means using resources.  Your settlement size determines the stockpile of resources you have available each turn and generates a minimum amount of response tokens and a research token. In order to make actions in a turn you have to use response tokens  to play the event cards or use a market card and build a structure, so it's a good idea to have a stash of them available, however you also need coins to buy structures in the first place or exchange for food.  Food is useful as it keeps your settlement content, if you have enough to keep everyone happy then your settlement grows, if you're a bit short then your settlement will shrink as do your resources.   Research tokens are special because they are useful in trying to acquire victory points by funding research projects.

I'm not going to go into the game in too much detail as I've only played it once so don't want to get too many things wrong but I will just talk about how you win the game.  To win you must accumulate victory points.  There are a few personality cards that can increase your chances of gaining a VP as well as funding various research projects.  If you accumulate enough you outright win the game.  The other way to win is for a player to have the most VP when the amount of turns available comes to an end.  There are 6 guaranteed turns and game mechanic that can allow for up to 8.

Last but certainly by no means least PRICE! I bought mine at the kickstarter for £20, brilliant! It's now retailing from GCT themselves at £29.95.  Not too shabby for what you get...

I thoroughly enjoyed the game and to quote one of the other players "it looked more complicated than it actually was".  The other 4 players have all said they want to play it again, which I take as a good review.  The rules are simple once you get going, the gameplay varied enough for the game to be played over and over and it was set at a nice pace.  There was plenty of interaction between players as they played cards that initiated Raids and Droughts on their rivals.  The artwork is great and the components really good quality and imho a reasonable price.

Email ThisBlogThis!Share to TwitterShare to FacebookShare to Pinterest
Labels: Board games, GCT Studios, The Pioneer Program