As the title of the post suggests i'm going to start a new terrain project.  What I have in mind is two new Bushido boards, yes two!! Lofty ambitions indeed :-)

The majority of the work will obviously be done in the new year, not only because of the lack of available time between now and then but also because of lot of the tools and bits and pieces will be arriving in the guise of xmas presents. However I have been able to do some work toward the first board which will be complimenting (I hope) my Prefecture of Ryu faction.

My thoughts toward this board is that it will represent a Daimyo's palace, I love the idea of a great Lord's residence being attacked by invaders - which is why i'm looking forward to playing "Rise of the Kage" the board game by GCT which represents a ninja faction invading a great Prefecture Lord's castle.  With that in mind I started looking for materials to build the board and I was fortunate that a terrain idea from a blogging buddy - Jez from "Carrion Crow Buffet" blog about cheap flooring tiles from Poundworld took me along to the aforementioned store where I bought some supplies.... 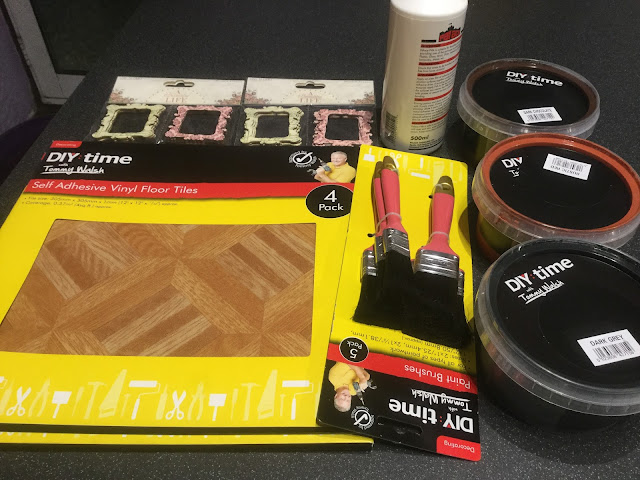 what I found when I got there was these awesome wooden floor like tiles, 4 for a £1 each tile being 12" x 12" which conveniently makes up a 2 x 2 foot board - the perfect size for Bushido!  Now I wouldn't want them on my living room floor as they are a bit thin and my dogs would tear them up in a minute but they definitely look the part (I hope) for my board.  After such an arduous shopping session I had to relax with a cup of tea at the local cafe where I discovered giant Custard Creams exist - heaven!!


anyway, part of my Poundland (or whatever its called) splurge was for these frames which I thought would make really good dividing paper walls within the palace and that would be something I could work on in the mean time while I wait for the big day. 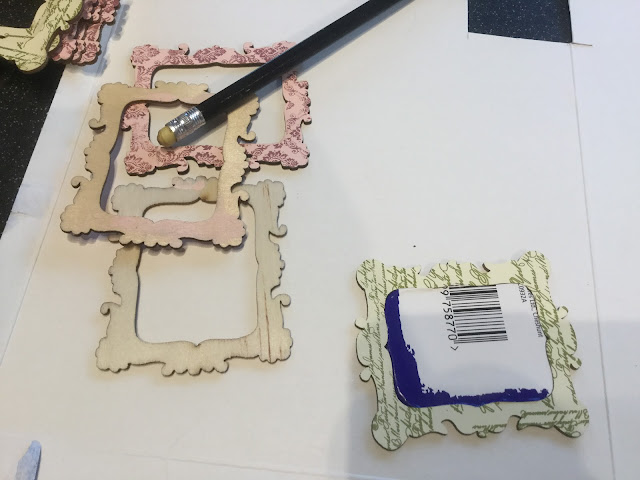 I cut some cereal box card to the shape of the frame middle, i could have sandwiched the card between two frames but wanted to stretch my meagre outlay that little bit further.  In the meantime I sprayed the frames with some black car paint (from a previous visit to Poundplanet or whatever its called...). 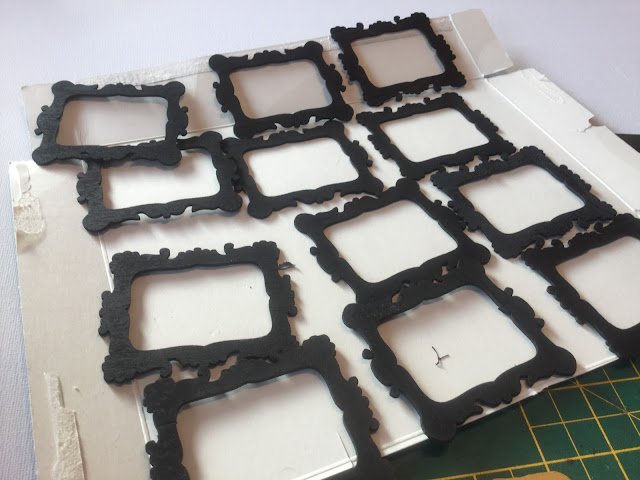 the card middles i painted a brownish yellow and painted some "oriental" artwork to them. 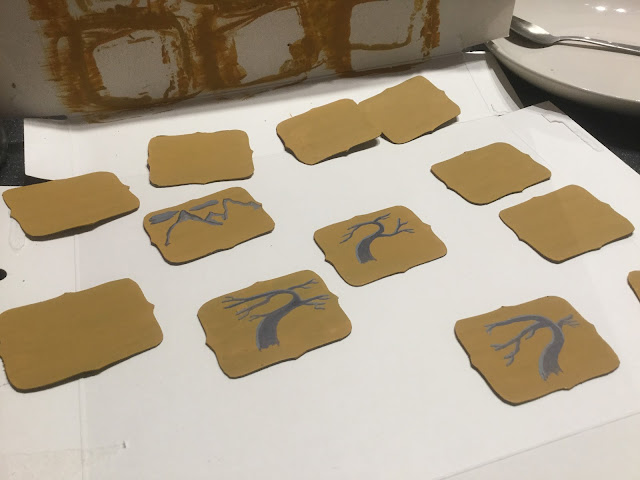 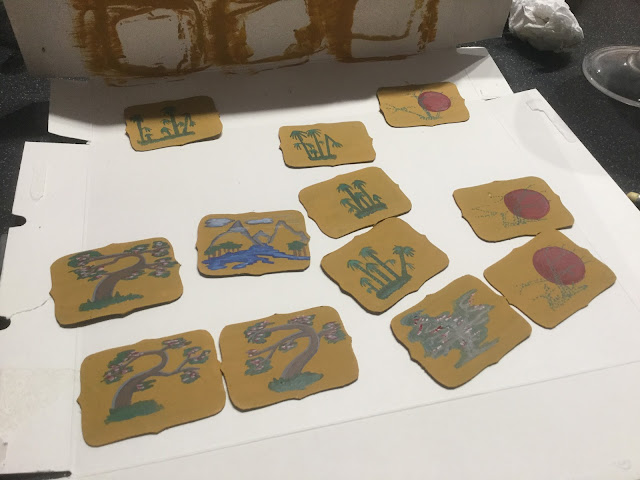 once painted I glued them with PVA to the frames, with a little bit of persuasion in some cases 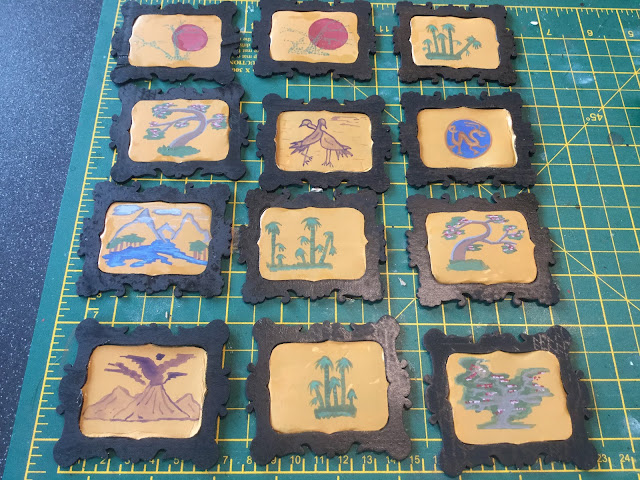 I then cut up some old clear perspex I had from a TV dinner tray that  broke (don't ask...) and used them to base the dividers so that they could go on any terrain board if required. 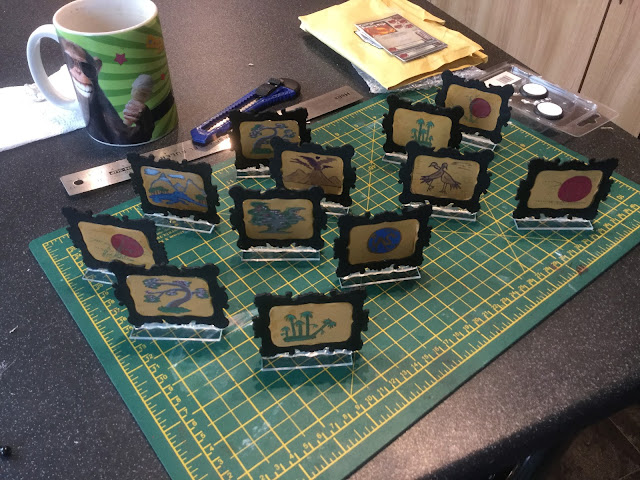 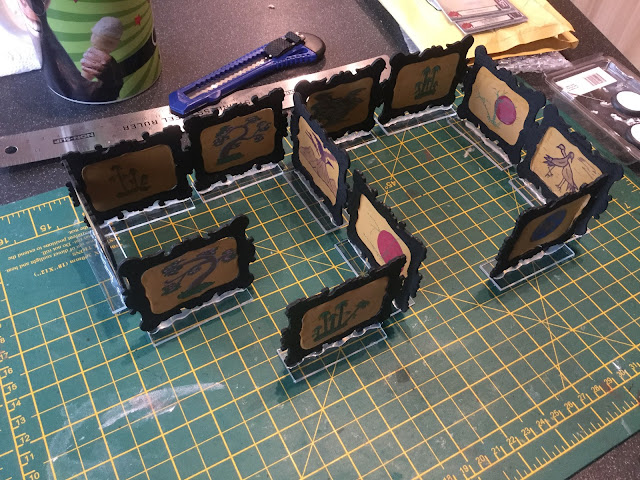 and there we have it! I may make up some more, after all 6 frames for £1 isn't bad value and I might make those up without the design so that they are spaced out a bit, but for now I consider this a job done.

More to come on this project.
hope you enjoy
dGG
Posted by Da Gobbo at 07:44

Email ThisBlogThis!Share to TwitterShare to FacebookShare to Pinterest
Labels: board, Bushido, Cult of Yurei, Prefecture of Ryu