please find the batrep of battle 3 of my recent Bushido tournie (I told you it takes a while to write them up!).  If you need to refamiliarise yourself with what happened in previous battles/episodes you can read them here, here and here.

As before I've only taken a few photos so sorry for the lack of eye candy, you'll just have to make do with the narrative ;-P

Aiko,struggling to keep up with small column of Temple monks, felt the leathery hand of her Guardian lift her up and onto his broad back. The giant silver-backed gorilla, recently brought back from the brink of death by Aiko’s power following a devastating katana strike, barely broke stride as he easily bore the weight of the young Shungenja.  The scar that followed the line of his powerful shoulders and down his spine was still vivid and raw, Aiko traced the wound with her fingertip allowing her Ki to sink into the flesh, cleansing it from any lingering infection. With a snort of relief, the huge simian looked over his shoulder with a toothy smile on his normally serious face.  Aiko, wrapping her fingers in his coarse black fur settled back and looked around at the landscape that the weary Ro-Kanese found themselves travelling through.

The fight with the Tengu back at the Garden of Six had left the group battered and bruised, but crucially had also sapped their morale.  Master Akari, the mercurial Tanuki monk had begged clemency from the ancient birds in order to allow Aiko to heal their wounded and withdraw from the Garden in peace, which they had allowed begrudgingly. The monks had gathered their fallen comrades and had left the Tengu to their bizarre rituals, rituals which could tip the delicate balance within the Jwar Isles too far. Since then the Master had pushed the monks hard to get back to the Temple nestled in the mountains of Ro-Kan, determined to get word to the other Masters.

Aiko, watched as her friend Koji, the young orphan boy who, with his pack of playful macaques roamed ahead scouting the trail for any dangers to the group. The boy’s naturally jovial face unusually serious as he took on the important role. The blasted ground around them was inhospitable - hot and dusty, lit by streams of magma as the superheated rock broke through the surface filling the air with sulphurous gases. Rocky outcrops littered the land with some particularly long rubble strewn protrusions ran parallel forming a pair of channels through the valley that led to the foothills of the Ro-Kan. Suddenly in the distance, the agile young monk, lithely ran up the long Bo staff he carried and balancing precariously at the top peered forward, shading his eyes from the low sun. With a hand gesture he beckoned to Lita, one of his macaques who joined him at the top of the staff and looked out along the valley.   Following their gaze Aiko could only make out a dust cloud that rose from marching feet, no detail as to who was making it. As quickly as she climbed up it, Lita ran down the staff and trotted back toward the column making her way over to Akari and chittering away to him.

Gathering the monks around him, Akari gave some quick instructions to the small simian who scampered off back to relay them to Koji.  Addressing the remaining members of the group, the mercurial Tanuki gestured to the approaching dust cloud. “A patrol from Ryu’s army are approaching, a little off their usual route.  It would appear that they want to block this pass, unfortunately the quickest way home with the nearest alternative three days travel.  The temple masters must learn of the Cult’s increased activity and the Tengu’s folly.”

Kenko regarded the diminutive Tanuki speculatively, “Master you are the swiftest of us all, the rest of us can hold them here allowing you to get a message through.” The youthful monk glanced around the group, taking the measure of each of them. “The mission is all, the balance must be maintained regardless of the cost” Kenko spoke with a passion evident to them all, each of the warband nodding in agreement at his outburst.  Akari nodded slowly at his student’s impassioned speech, moving over to his customary position on the flank while the rest of the Ro-Kanese spread out into their familiar fighting formation.

Koji already in his scouting role could make out individuals now, directly in front of him were three guards, two with yari and the third carrying some kind of musical instrument made from a giant seashell. Blocking  the other passageway, were four Guardsman again mostly armed with yari and led by a samurai who wore the Prefecture blue with the black armour of a ward of the court and carrying a heavy katana.  Focusing his Ki he forced a narrow stream of the spirit energy to his friend Aiko who eagerly converted the Ki into “blessings ” for her Guardian. Koji’s pack raced forward to intercept the advancing Prefecture soldiers and hold them in the pass in order to enable the other Temple folk to catch up. 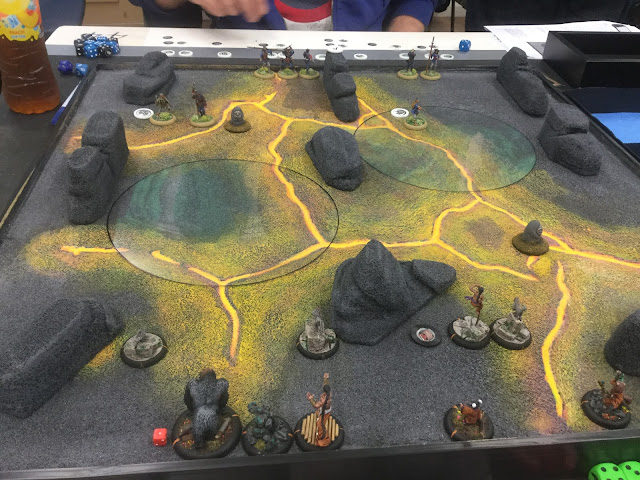 The Guardian aided by the Ki blessings from Aiko, sped across the intervening ground in a thunderous charge, roaring it’s anger at the guards causing them to cower in fear.  Reaching out its giant hands the furious silverback grabbed the ankle of the nearest yariman and threw him to the floor with a crash.  Two of Koji's macaques attempting to “ape” the gorilla rushed headlong into the fight with the samurai, desperate to keep the Prefecture from forming a line of soldiers across the pass and give the Master a chance of breaking through.  Sadly the tiny monkeys lacked the destructive power of their 500lb cousin and could do nothing but irritate the armoured warrior.

Kenko tapped into his own spirit energy, drawing on the Ki to fuel his muscles allowing him to run as fleet as a Ro-kan mountain goat.  With swift strides he easily paced the Guardian, drawing level with the giant creature and slamming into the nearest guard, an old veteran of the Dragon Wars by the look of him. The force of the charge bowled the wiry Yari-man over but caused no further harm as the veteran of hundreds of skirmishes absorbed the worst of the blow with his armour. A spinning side kick delivered to the abdomen of the samurai, doubled him over and toppled him to the floor.  Seeing the immediate area around him temporarily clear he moved closer to the gorilla, Kenko’s clinically delivered and controlled fighting skills strangely complimented the elemental fury of the silverback. 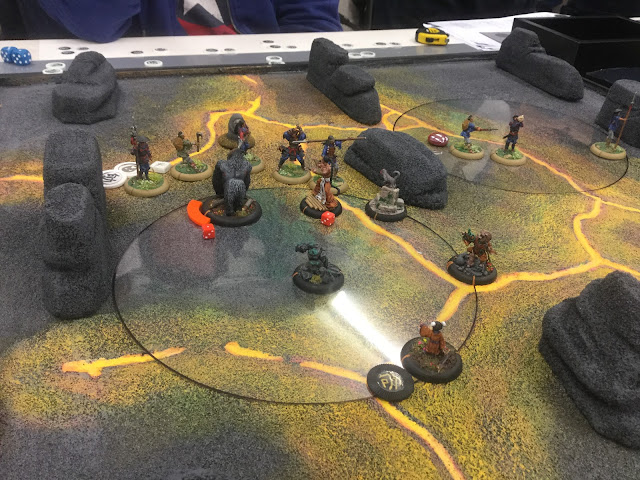 Akari, always scanning, evaluating hung back from the fight, looking for the opportunity to slip by. It was frustrating to know that his own formidable fighting skills could aid his students in the unfolding battle but the mission was more important than this skirmish. He must get by and warn Ekusa and the other Masters of the coming danger to the balance.  With a wave of his hand he bid the blessed Kami forward to stop a Prefecture soldier from slipping past the Guardian, the earth elemental responding with a grunt that sounded like a small landslide.  Apelike in appearance, the Kami was a small but powerful creature made from the very bones of the earth, it strode straight toward the soldier batting away the feeble thrusts of the Ashigaru’s yari with a swipe of it’s rocky paw and landing a solid blow to the poor man’s torso that took his breath away.

Aiko, in her customary position at the rear of the engagement lent her spiritual strength to her friends, crafting blessings and casting them out on silvery streams of Ki, gifting Kenko and the Guardian with healing energy or causing the blows that they landed to burst into flames. Her closest friend - Koji was lingering close by in case any of the enemy slipped passed the Temple fighters and providing Ki for Aiko to leech off and use to fuel her power.

The Guardian fought with an apocalyptic fury, massive fists connected with soldier's torsos, buckling armour and flinging his opponents to the ground.  In a show of titanic strength the howling simian picked up the pummelled body of a Prefecture yari-man and clubbed the Ryu samurai to the floor with the broken corpse.  Beating his huge fists against his meaty chest, the 500lb silverback roared in victory as the surviving soldiers cowered in fear.

Master Akari seeing the gap created by the awesome beast, drew upon the Ki he had been hoarding in readiness for his opportunity.  Channelling the spirit energy to his muscles, he sped off toward the far end of the pass.  Fleet as a startled deer, he danced around the long reach of the Prefecture's yari and gained the empty expanse behind the enemy lines, his legs a blur as he ran flat out toward the distant Temple and complete the mission.

With the diminutive Tanuki gone, one soldier, a female goshi slipped passed the Temple warriors and made a break for freedom heading right for Aiko.  The little Temple Shugenja, forgoing her spirit powers, tucked herself into a little ball and flung herself at the knees of the goshi bowling her over to lie in a crumpled heap on the dusty ground.  Springing to her feet Aiko ran on, catching up with Koji and his pack and spurring them on after the Master. With the gorilla screaming in their faces over the prone figure of their leader, the remaining Prefecture soldiers stood back and allowed the rest of the Ro-Kanese to escape passed them and join the Temple Master.