A Tale of 4 Gamers - another batrep emerges

Damon has stepped up to the mark and written up his Saga battle from the games day we had a few week back, Damon played Scots and Chris the Vikings, please enjoy...

Lachlan looked across at the Viking horde with trepidation. He had heard of these invaders and their brutal ways. He could see their berserkers in their strange clothes apparently not to be messed with and he thought to himself (I can see why). He had also heard that they are quick to anger if you attack their manhood and had learnt a name to call them 'blaudr' and a plan came to mind as he stared at the river crossing knowing that he had to take the crossing if he was going to conquer anymore of these soft Anglo-Danish lands.

Lachlan sends his two units of Soer-chele towards the bridge chanting "Your a bunch of blaudr" and watches the Vikings deploying across the field. He see's that the viking heathens reacts to his warriors chants as the main bulk deploy opposite the bridge and just 8 men deploy the other side of the ford. He has told his Soer-chele to lure them across the bridge and use their reach ability to try and kill the berserkers and to avoid combat with them.

The scenario to be played was "Battle at the ford". We both chose 2 items of scenery each so we had a peice each to lay on the table. We rolled for placement and we both got not within 'L' of any table edge but we forgot the rule about not with 'S' of the river, as you can see in the photo's. 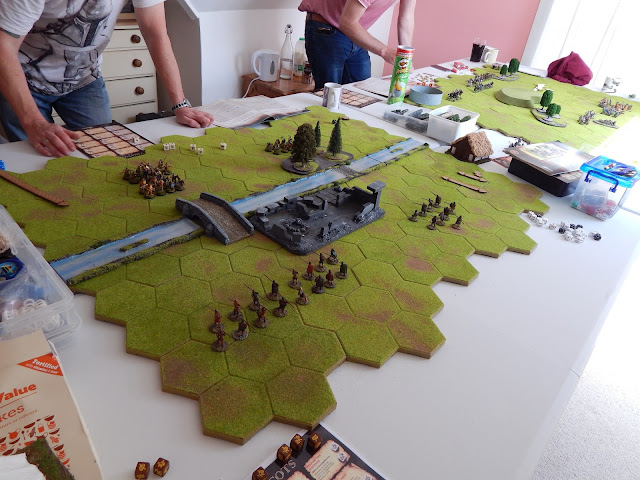 Turn 1
Seeing no ranged weapons Chris lead his charge over the bridge with his berserkers followed by his hearthguard, warlord and a unit of warriors. This placed the bersekers on the bridge. The warrior unit opposite the ford moved into the woods. The two scot warrior units move slightly forward within 10" of the bridge. The hearthguard units and warlord move upto the river. 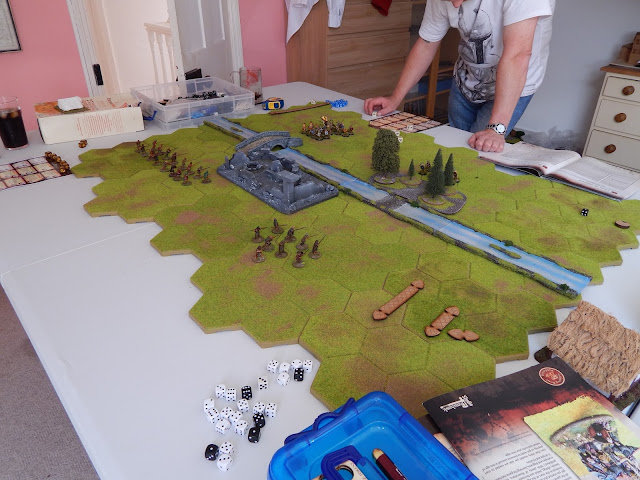 Turn 2
The beserkers move forward off the bridge with the hearthguard behind followed by the warlord and the warriors still on the bridge. The viking warriors in the wood move to the fords edge. The two scot warrior units activate using reach and move forward and fire their javelins into the bersekers killing all four of them. One unit of Hearthguard move into combat with the viking warriors at the ford. Combat ensues and 4 warriors die and no Scot hearthguard casulaties. 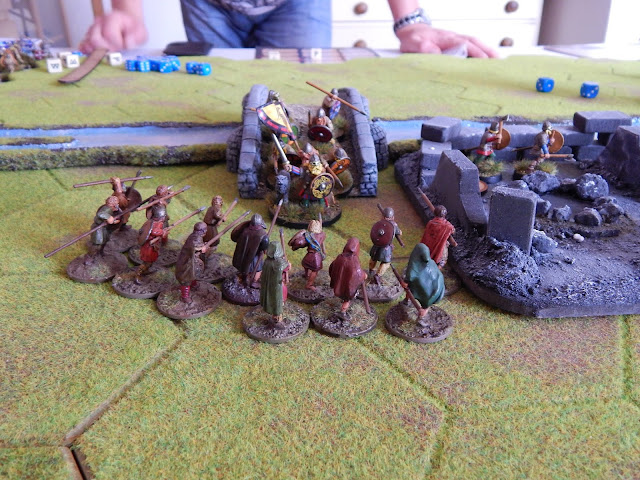 Turn 3
The viking hearthguard go into comabt with one of the scottish warrior units. The Vikings win as they kill 3 warriors but suffer losing 2 hearthguard. The scots disengage. The remaining 4 warriors by the ford engage the hearthguard again and the scots suffer no wounds but the warriors are reduced to just 2 and disengage. The scots using reach again activate the hearthguard unit behind the ones that just fought in combat and move in front of the others lose a volley at the remaining two warriors and with the use of their fatigue kill them both. The 7 warriors left also activate using reach and fire into the warriors behind the Warlord causing 2 casualties. 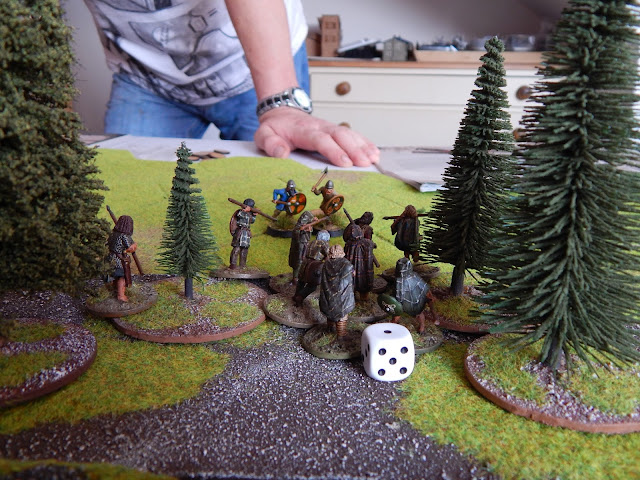 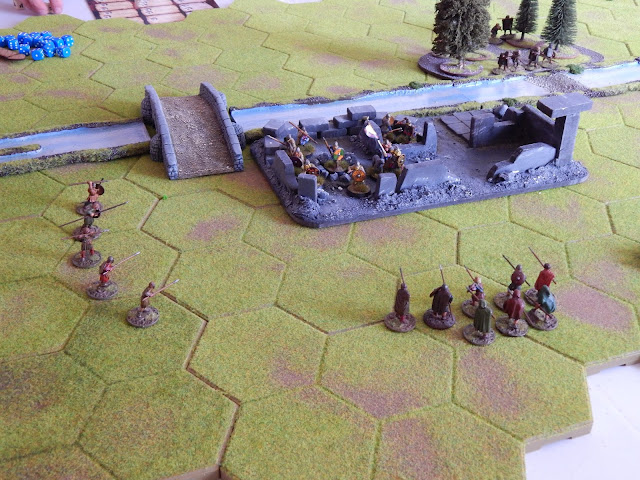 Turn 5 doesn't come as Chris conceeds knowing that with the scottish losing just 3 warriors and himself losing a hearthguard unit, a warrior unit and half his other heartguard unit and 2 warriors he cannot win. 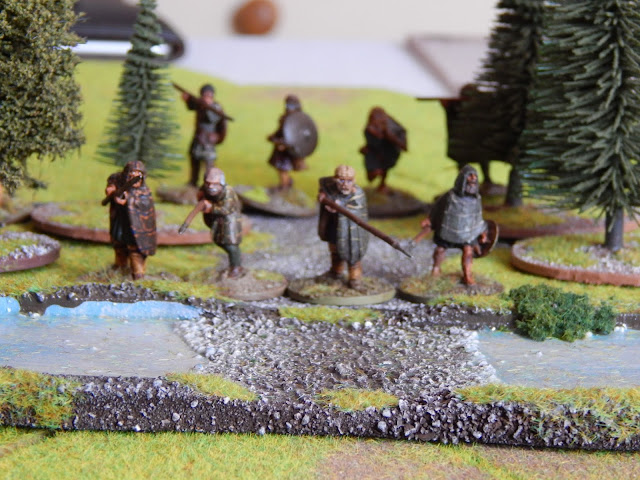 Lachlan peers through the foilage to see the Viking blaudr scurry back over the bridge and run of into the hills. The scottish raise their voices and start chanting his name "Lachlan Lachlan Lachlan", his chest swelling with pride as with the loss of just 3 of his Soer-Chele they have turned back the infamous Viking Scurge. 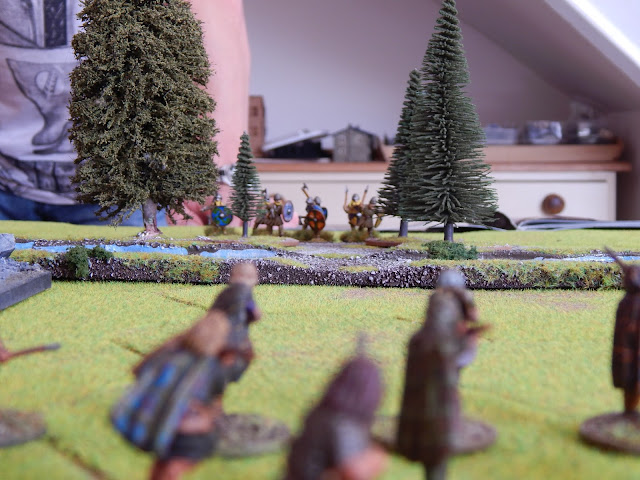 thanks Damon for providing this...
dGG
Posted by Da Gobbo at 07:42