This week there will be no Bushido updates (boo, hiss!) instead I have a two part ATZ AAR that's been sitting in my drafts for way too long. You may remember from last time That Violet was speeding away from the suburbs of Jungville, the AAR conclusion can be found here. Anyhoo the story continues....

The tears would not stop flowing, filling her eyes and streaming down her cheeks, a constant reminder that she had let her survival instincts over-ride her sense of decency.  Violet looked into the rear view mirror of her "borrowed" car hoping that the final scene of Maggie's demise would be re-written.  The sight of Kitty (another girl abandoned) tearing out her companion's throat was almost too much to bear and Violet stifled a sob as her tortured mind played it out over and over again.  She needed to stop, she needed to take stock and process the guilt that was eating her up, she needed to rest and she needed to find out what the hell was going on!

"byt' po semu" she said out loud in Russian (as she always did when under stress) "So be it" she repeated in English. She would find a little house out in the countryside somewhere and catch her breath. Up ahead a huge plume of smoke billowing up into the atmosphere brought her back to the here and now and she had to slam on the brakes as she saw the flashing lights of an ambulance blocking the road in front, behind that was a police car and more importantly behind that was a huge truck on it's side and on fire!

"What now?" she muttered to her self as she stepped out of the vehicle, carefully hiding the assault rifle she had taken from the Guard back in Jungville under the coat she had taken from the farm house (sigh, more guilt) and strapped on Ran'un or Storm Cloud - the heirloom katana she had taken from Vlad (no guilt on that one) after he had murdered her friend Stefan. Striding over to the paramedics who were standing by the ambulance she went to find out what the hell was going on now.


Violet day 15
ok its been a while since the last episode of Violet's adventures in Z land, you can read the last part here. After driving off and abandoning Maggie, Violet is consumed with guilt. She had hoped that she had suppressed her ruthless nature when she had run away from her possessive father. She has tried to reason it out by telling herself that Maggie’s zombie bite had condemned the quiet, competent woman to her death anyway, but it isn’t sitting right with her.  Tired and lonely she decides she needs to find somewhere to get her thoughts straight and  heads back out of the ‘burbs to find a farm where she can rest and recuperate.

This is a take back mission, where Violet needs to find a safe place to rest I.e. the farm house. However in the way is an overturned truck that is blocking the turn off.  The emergency services are in attendance and are also blocking the road (I keep forgetting in my games to involve the police after shots being fired, so decided to include them from the start……) 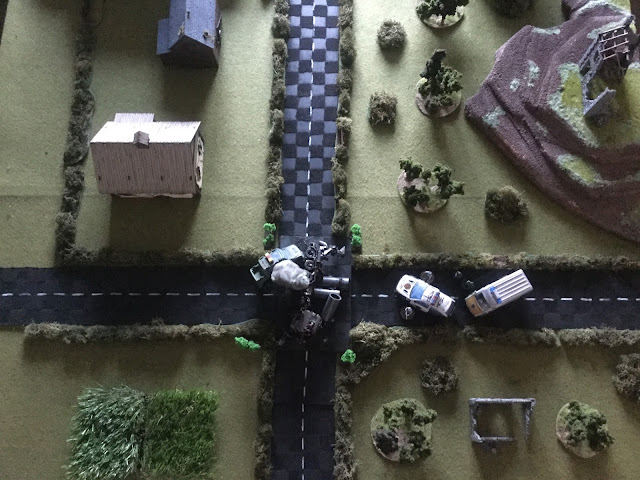 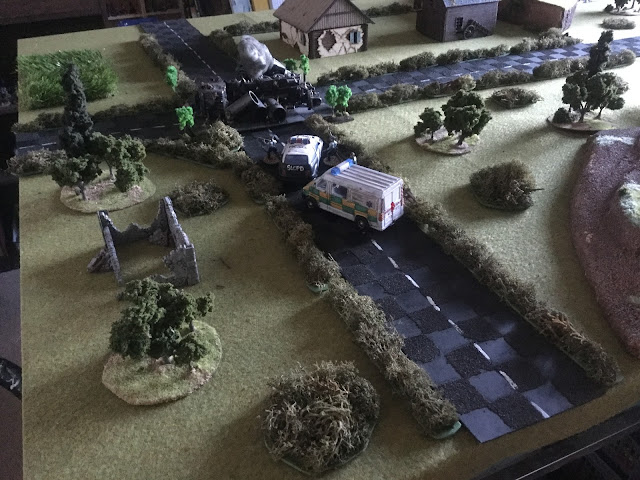 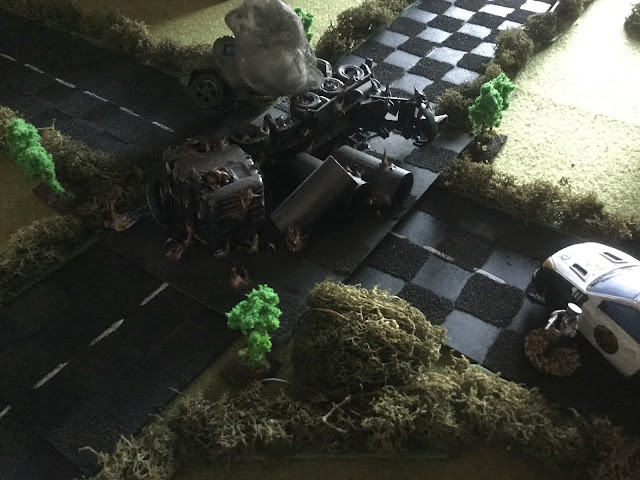 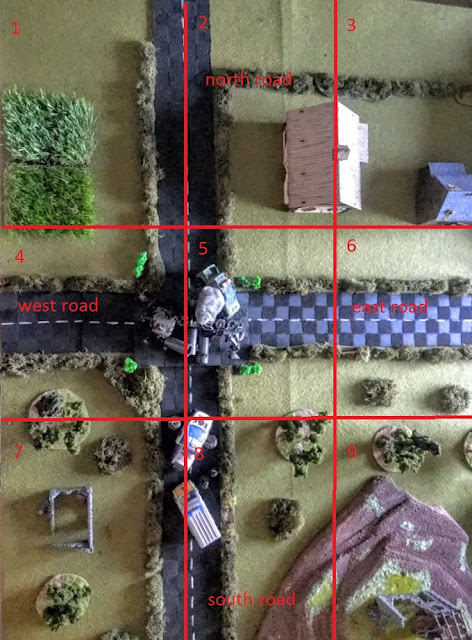 So Violet comes in on section 8 in her sedan.  All of the PEFs are rep 5 and there are two in section 4 – one behind the wreck another in the wheat field. The last PEF is behind the bushes but on the road in section 6. I roll an initial 5 zeds when first coming on the board. I rule that the truck on fire will attract a further PEF onto the board via a randomly determined road edge, with a maximum number of three on the board at any one time until 10 turns have been played in total (just for fun!). The police officers are sergeant Roberts (rep 4) and officer Jones (rep 4) both armed with BAPs. The paramedics are both unarmed and rep 3, Katie and Andy. 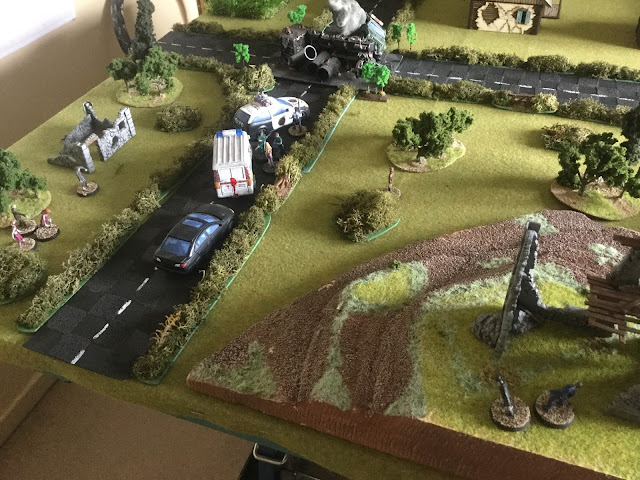 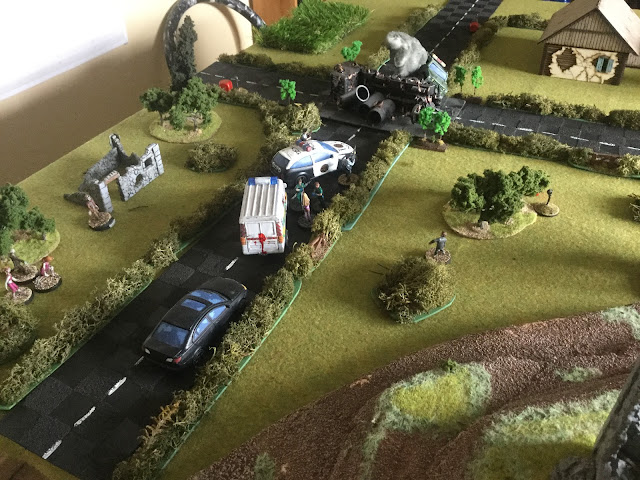 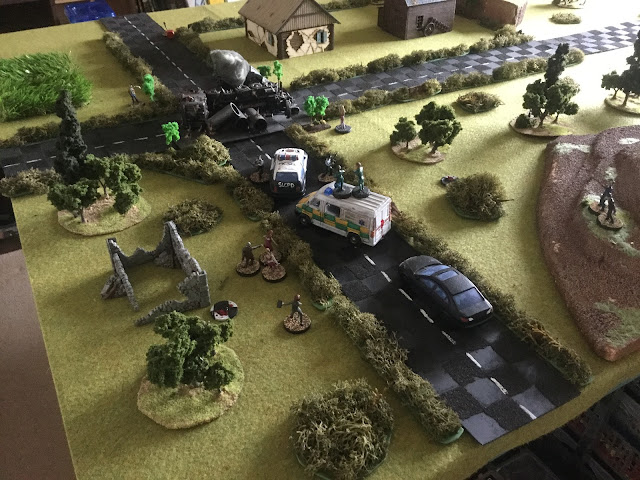 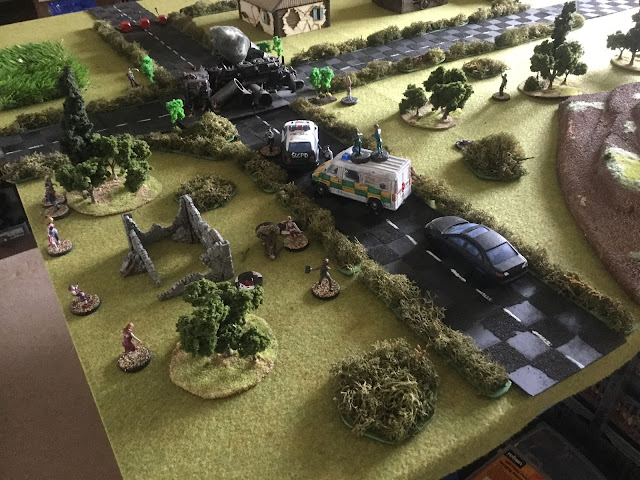 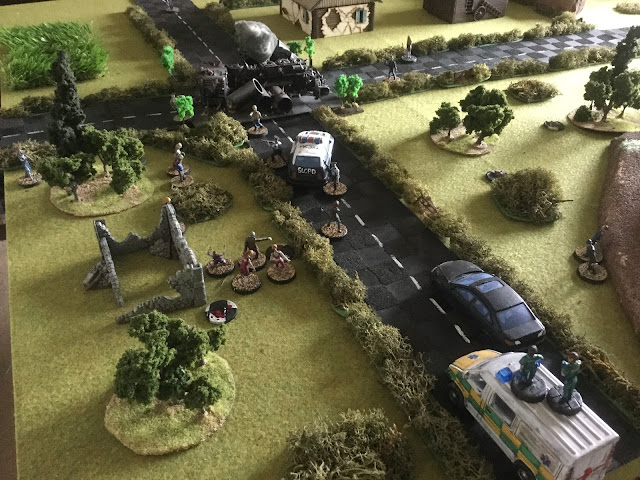 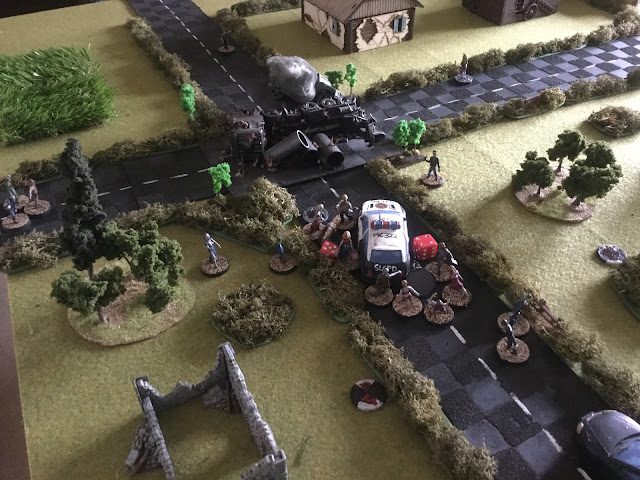 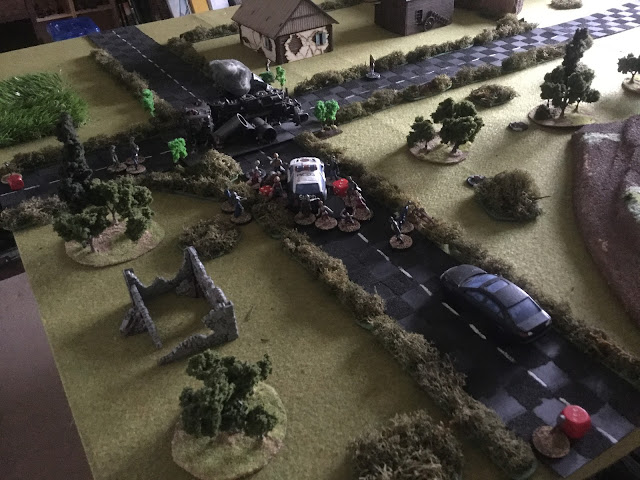 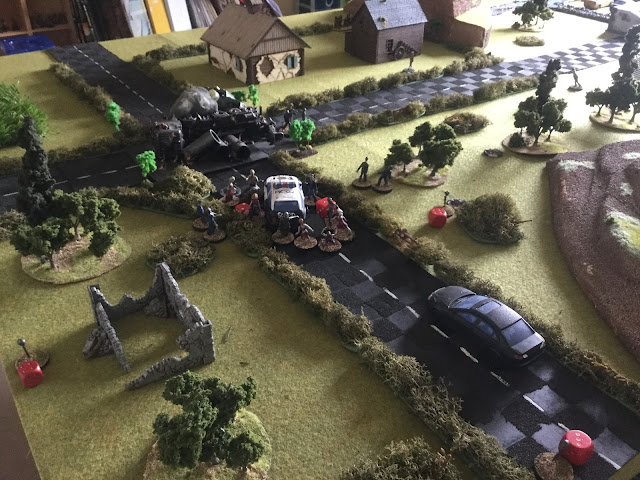 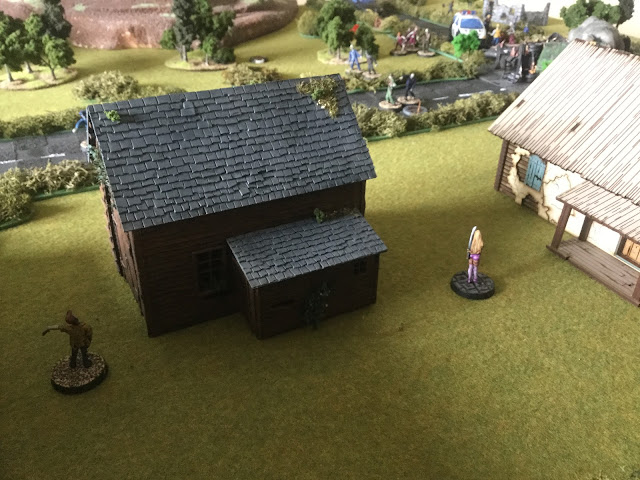 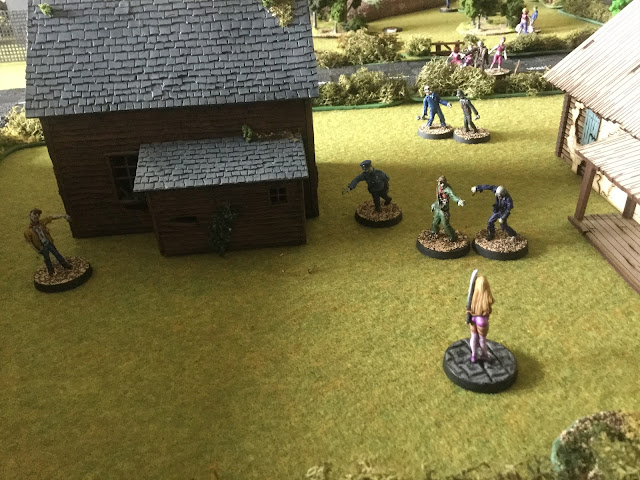 Violet pulled the trigger, the rifle was on full auto and she sprayed the area in front of her with bullets. The zombies she had been hoping to hit moved ever closer,"Kagogo Cherta!?!" she screamed, "what the hell".

Discretion being better than valour, V retreated behind the farm house once more to check the load out of her assault rifle, "bloody shoddy American gun" she thought to herself, wishing she had a more familiar AK or something.  This was getting serious again, she had thought that with the Politsiya nearby that she would be a bit safer, but those poor "duraki" - fools had gone down hard under a flood of the infected and now she was once again fighting it out with the undead on her own. 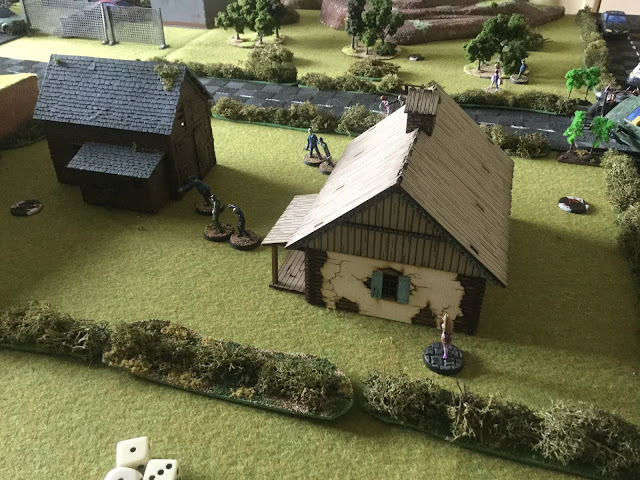 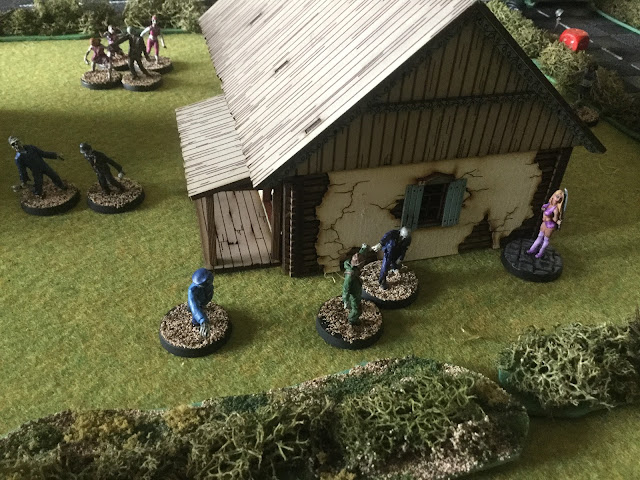 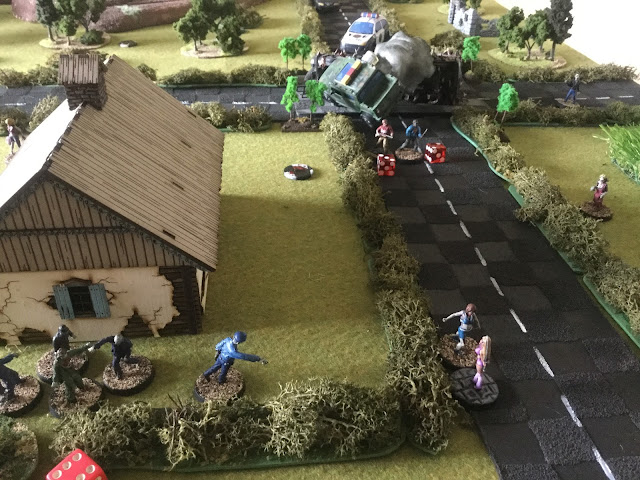 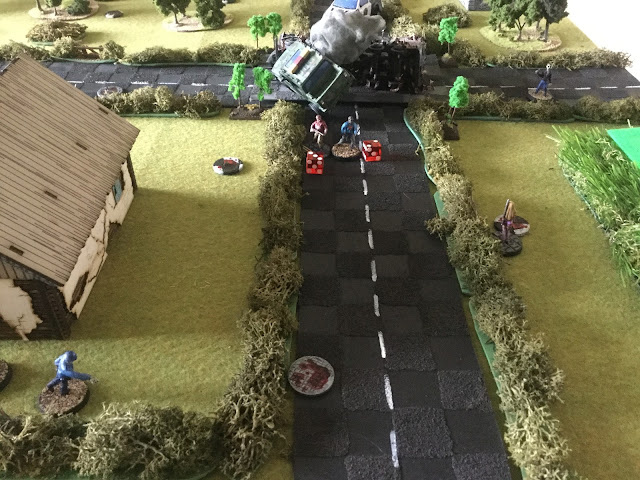 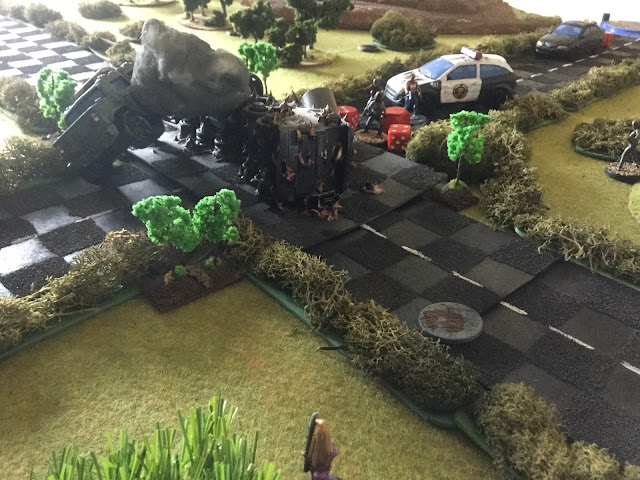 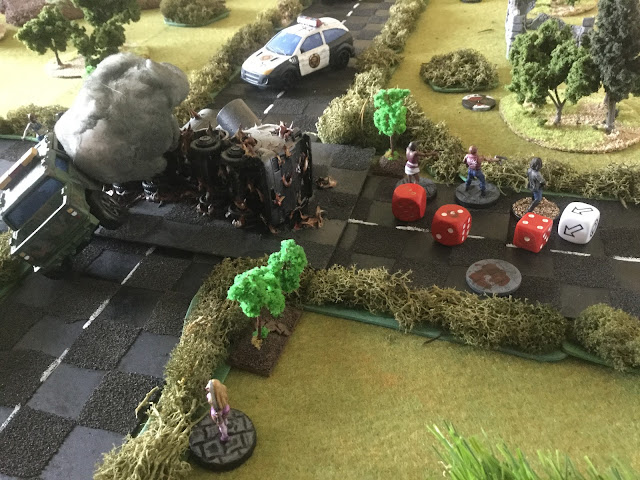 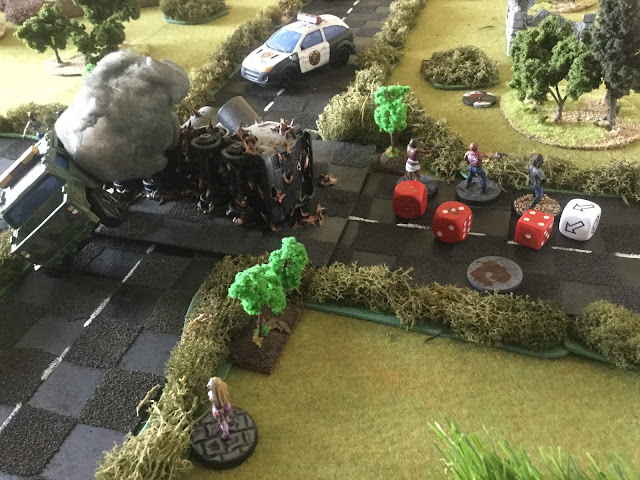 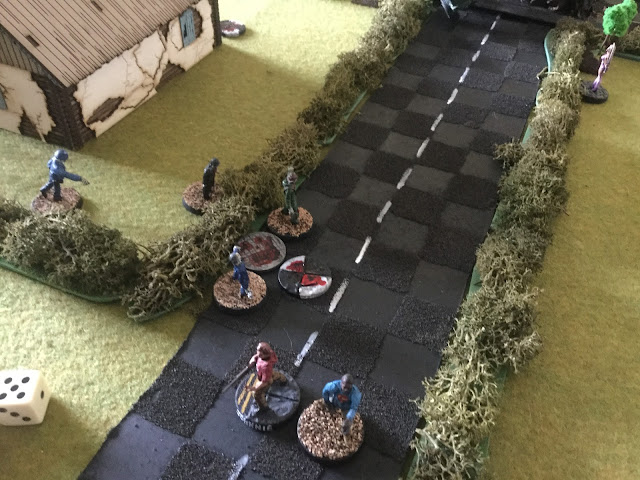 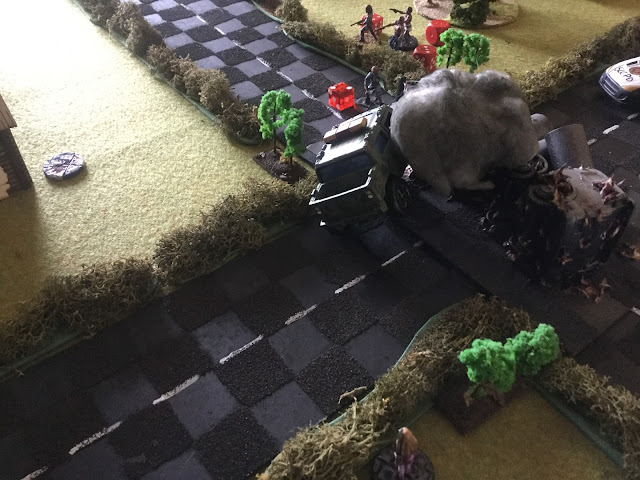 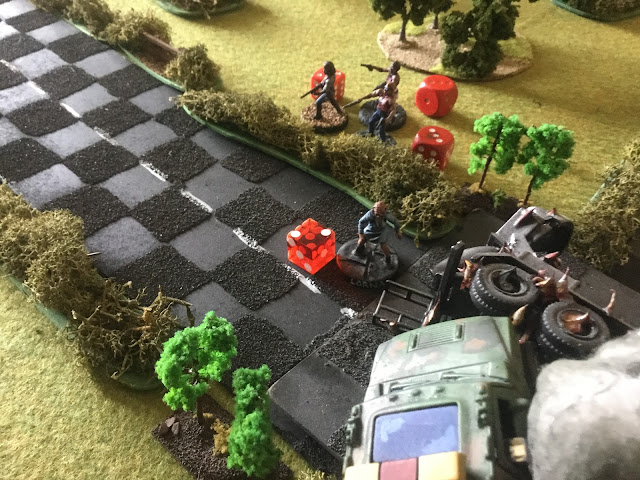 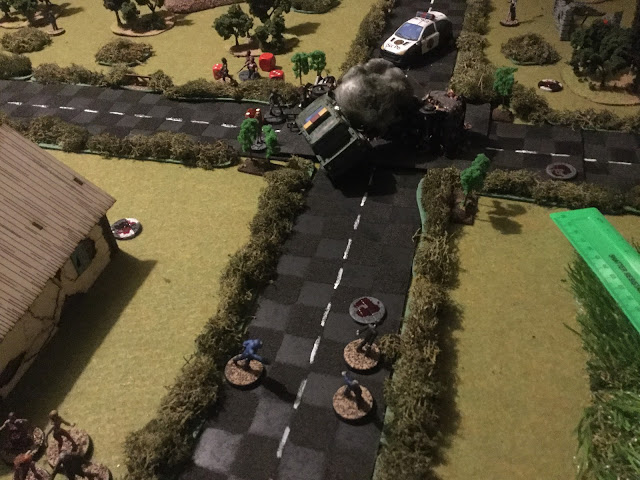 "Hey, don't shoot! I'm not one of them things, I'm human. Don't shoot"  Violet dropped the sights of her rifle down a little, not all the way, she was becoming wise to the new world order but a little.  The voice was coming from behind the wreckage of the military vehicle that was the root cause of V's latest headache.  With her hands in the air and woman dressed in a neat business suit and carrying a rather nasty looking meat cleaver came out from behind the truck.

"My name's Lorna, please don't hurt me i'm human i swear".  Violet grunted an acknowledgement as if to say it was obvious by the way she was speaking.

"My name is Violet, what are you doing here Lorna?" Violet indicated with the barrel of the gun for Lorna to put her hands down.

"Same as you I guess, the crash blocked my path.  the group I was with turned back and headed back to the city but i didn't want to go back to that hellhole so jumped out and went over to speak to the cops when those things attacked!"

"We can talk about it later, there are too many of those damned dead-heads around!" said the lithe Russian, gesturing again with the rifle and taking a shot at a zed that was getting a little too close.  "Let's go!"