Continuing my recent terrain building splurge, I thought to start a post apocalypse themed objective, although it could be used in any modern setting really. With this in mind I looked to my resources to see what I could come up with (frugal gaming at its best). What I found was some scrap MDF, some drinking straws and some old till roll holders.  This is what I decided to do with them..... 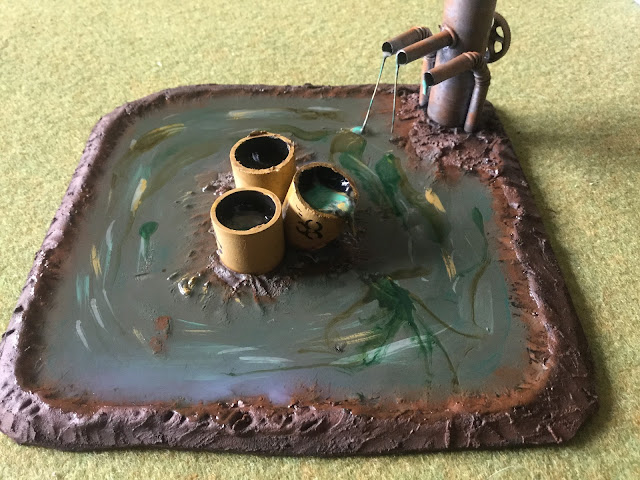 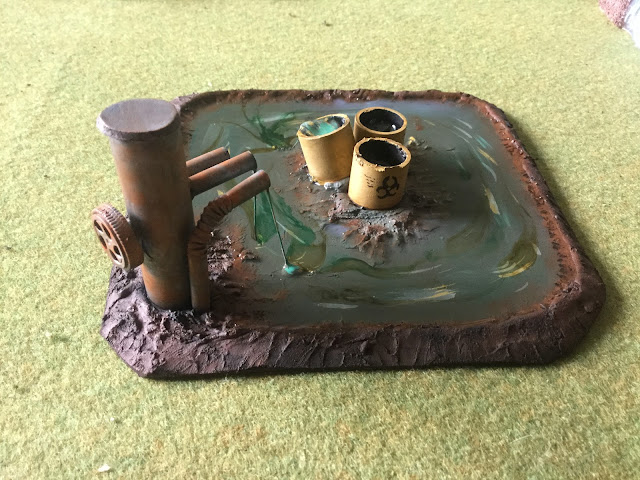 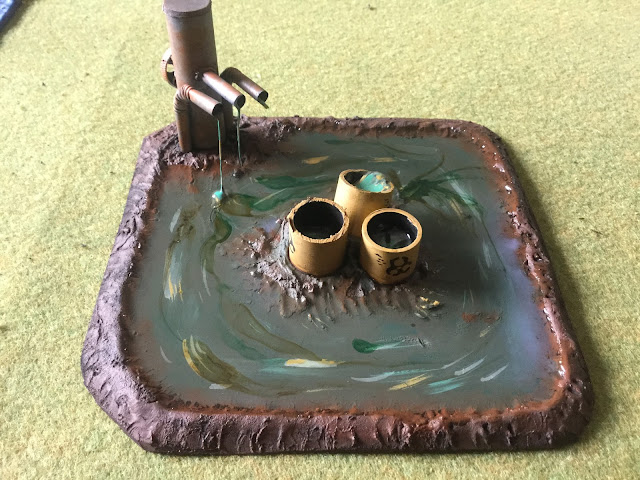 Behold my toxic waste dump. The upright pipe is actually the plastic tube used to hold electrocardiograph (ECG) paper that I took from work, rather than just throw it in the bin after the paper ran out. Capped with a foam lid with drinking straws as secondary pipes, I finished it with a  wheel taken from a cheap car toy that I will rough up later for scatter terrain in my ATZ gaming. The barrels were till roll holders cut in half and filled with polyfilla to represent ooze. Polyfilla was also used to build up the sides of the dump.  The toxic waste dripping from the pipes and barrel was represented by hot glue and the "water" is a resin I've had knocking about for a while. One bonus of the resin was a fly landing on it at some point during the curing process, which "fossilised" it, bad for the fly but looks fab on the model....(I know, I know I'm a bad person, but I didn't do it on purpose!).
﻿﻿
Painting it was fairly basic even for me, the pipes all Mithril silver and rusted up, the "pond" bed was painted in Vallejo US Olive Green and had random lighter green and yellow swirls. While the resin was curing (and before the fly!) I dragged some green and yellow ink through it to create a 3D effect.

Overall I'm quite pleased with the effect although I wish I'd been a bit more subtle with the painting under the resin, also the resin hasn't cured so well in some places leaving a white film, although this does look a bit toxic its a lesson learned to be a bit more patient and pour it in a couple of thin layers rather than one thicker layer.