Meet the Simpsons, my family of survivors from Zomtober. This is the last Zomtober post so although I haven't painted these fresh this week I thought I would share what I have come up with for them. In order to use them in a game I felt some special rules were in order to represent family bonds and children in the zpocalypse.  But first introductions are in order.

Ma Simpson (Mary-Lou) the matriarch of the family, lioness and all round star! She's rep 4 armed with a compound bow and SMG, this mother is all about protecting her cubs. She is also a medic and has a wiff of the Britney Spears about her (white trash attractive..lol)

Pa Simpson (Billy-Ray) husband to Mary-Lou, loves his beer, brawling and 'bow.  A rep 4 co star armed with X bow and machete he loves a good fight. He has the attributes brawler and hard as nails.

Next up is teenager Bobby-Joe, eldest of the young'uns he is a bit of a wild loner. Rep 3 and armed with his trusty .22, he has the initiative attribute.

Lastly we have the twins, pre-teen girls who were the terror of the teachers at Jungville Middle School. Gracey-Lyn oldest by 2 minutes (and don't you forget it!) blagged her pa's SMG and Bonnie-May who snagged her momma' favourite .357! Bonnie-May also totes her favourite prank weapon; firecrackers (6" range, no impact but makes noise 6d6 after a turns delay) 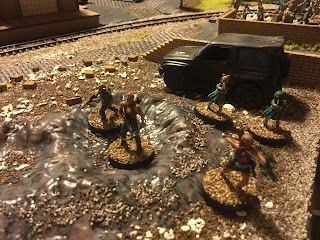 Ok so these are family specific rules but I thought they reflected some realism well.

Rule one - The family that slays together stays together!
The family never need to test at the end of an encounter for keeping it together, they automatically pass.

Rule two - protect the Cubs!
The adults will never runaway while the children are still on the table, they will always stay and fight!

Rule three - you stay close now, ya hear?
The children must stay within 4" of an adult at all times, if for whatever reason they become separated more than 4" apart the child will immediately stop moving and must remain stationary until an adult moves to within 4" (the exception to this rule is my teenager model as he is just old enough and has the initiative attribute, I see him as a loner!) They can still shoot weapons and fight in melee but cannot move away from danger as they are rooted to the spot.

Rule four - growing pains
When testing for rep increases the child can only increase on the roll of a natural 6 followed by another 6. This may seem harsh and I know kids learn quick but rep is also about demeanour, skill at arms, muscle power etc.

Rule five - a parents grief
If one (or more!) of the children die then each remaining adult must test immediately by rolling a d6. On 1-3 the parent becomes filled with rage and will 'kill' any zed on the table before ending the encounter, they will gain the rage attribute from here on out. On a 4-6 they will become overcome with grief and will become inactive until they roll a 1-3 in following activations and then they become enraged as above. Note when inactive they can do nothing at all including defend themselves!
Posted by Da Gobbo at 07:39