I have been working on a project for the last couple of weeks, the hospital mentioned in my post - ambition.  This project has been fizzing about in my brain ever since I started thinking about zombie gaming way back in 2011/12. Then I switched careers and joined the ambulance service and started training (that never really stops!) and working shifts and gaming got put away so I could concentrate on the real deal.  Now I'm used to the shift work and settled in the job and have a little more time to dedicate to the gaming (although perhaps I should concentrate on the degree more....) the hospital project has come back to the fore. To that end I laid out the floor plans and bought some foam board!

I had a 2'x2' blank terrain board that I had already made up out of mdf and batten for another canal piece but hadn't got round to using yet.  On the plans I had drawn up a basement piece and ummed  and ahhhed about putting it in as it would protrude above ground level (the terrain board is 30mm deep and each floor needs to be 40mm) I was persuaded by another blogger - thanks N667! to put it in and I'm glad I did, the protrusion is not that bad and I have put in steps and ramps for the various entry points so that access won't be effected and as it was pointed out to me, a creepy basement is atmospheric and iconic to the genre. 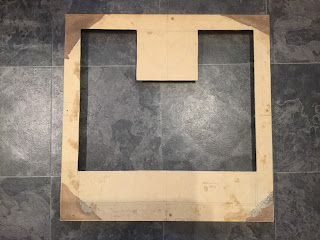 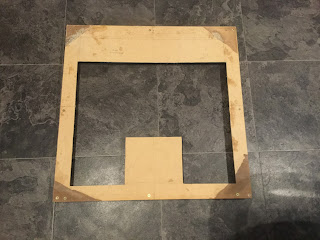 The first thing I did was measure out the ground floor onto the mdf, straight away realising that I wanted the basement to be the same shape as the rest of the hospital so that subsequent floors can be stacked on top. No problem, flexibility is my middle name (odd I know, but my parents were hippies....*this is a lie*... :P) cutting the shape out with a sharp blade was simplicity itself. I then sank the mdf to the bottom of the board and fixed it in place using the outer walls of the basement and masking taping the bottoms. 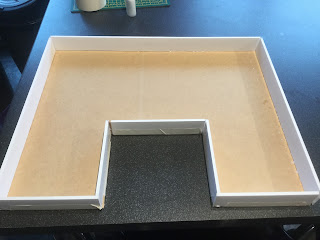 I then used my hot glue gun to reinforce the join at the top of the walls to the surface of the board.  This was the first time I used foamboard in my building and it was fun and easy to work with. 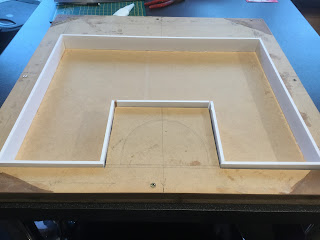 Once the basic shape was done I looked at the spaces inside and decided to change things around a bit from the plans. The mortuary moved to the south east corner and the rest moved around from there.  I had planned on using 3mm board for the interior walls but hobbycraft are having a special offer on 5mm (white only which is a bugger!) so I went with the thicker stuff, which is fine as this level will be supporting a further two floors and a roof with helipad and other fun stuff.  The lift shaft stayed where it was as I need this to run through to the roof obviously! I also added some stairs, again at the suggestion of N667, as this would give me more options and they went into the same place as the stairs will be on the other floors. 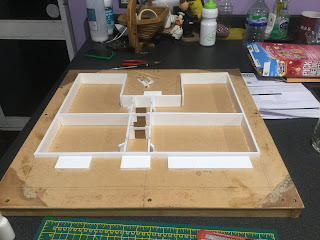 After that i added a cobblestone road around the edge of the board so that it would fit in and link up with the rest of my modular terrain.  the cobblestone is in a plastic sheet from Amera plastics and are amazingly good at only £2 per sheet.  I also used a sheet of foam from a local craft store to create a paved pedestrian area at the front entrance.  the three foamboard pieces on the rear of the piece are the bases of the slopes i plan to put in so that i can put in ambulance bays and an A&E (ER for those in US) and also a delivery entrance. Ive put in some minis for some scale! 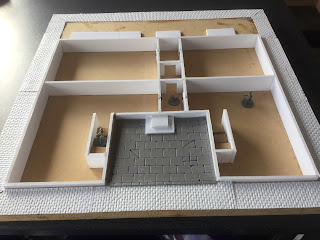 next i needed to seal the edges of the foam board with PVA and then give the whole thing a good covering with matt black car primer.  A basic paint job to follow, as this was the part of the hospital that the public doesn't see, in typical NHS style they are sparsely decorated, the floor is bare concrete and the walls an institution green.  Im not completely happy with the doors i have done for this part of the model as it is just the foamboard that i had cut out for the doorways and a staple at the top and bottom to allow it to be opened.  they are functional but don't look great so I will try something different on the next floor.  they have been painted a blue grey to match the boiler and other heavy equipment for the hospital.  I left the stairwells black for now to add atmosphere... 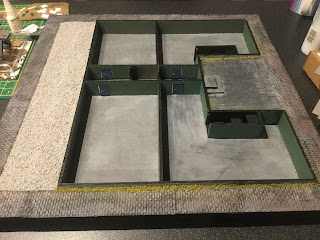 I have also added ballast to the rear of the hospital to make the ambo bays.  For the interior I have been scratch building furniture out of bits and bobs and i'm really pleased with the results, so much so that although i have ordered resin hospital beds for the wards etc I will scratch build everything else including all the signage which is hand-painted. 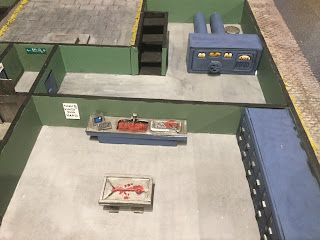 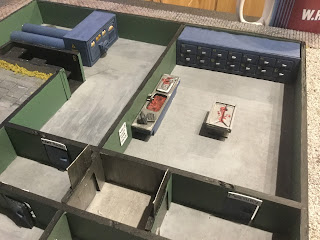 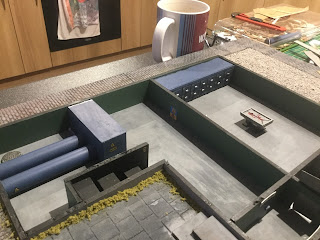 the mortuary consists of a stainless steel sink - which is bloodstained (of which i'm bizarrely proud of the tap that i built out of mdf scraps!) and tray with large scalpel for vivisection and a computer to update hospital records, a stainless steel autopsy table with drainage grooves carved into the foam for detail and of course the bank of drawers for the bodies!

I also scratch built the boiler adding plastic tubes (from a real ECG paper roll-empty of course!) to represent the outflow pipes, carving dials and details into the foam front of the boiler.  I have now added some floor furniture for survivors to hide behind. i also hand painted the pin up that a janitor has hung up out of sight of the big bosses... you can just see a sewer entrance as well in the top left to add an extra objective point. 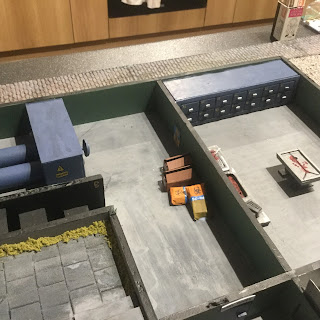 The next room was the store room, the shelves are made with coffee stirrers and bits of mdf, the boxes i built out cereal cardboard.  The sacks were made of masking tape wrapped around card scraps and painted in a sinister bio-company logo - are they the cause of the outbreak?  I will be adding blankets (kitchen towel) to the shelves to add more detail. 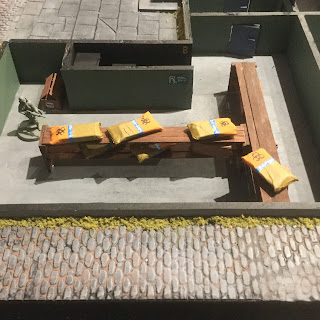 This level is completed by the laundry room with scratch built washers and another piece i'm weirdly proud of - the laundry basket! 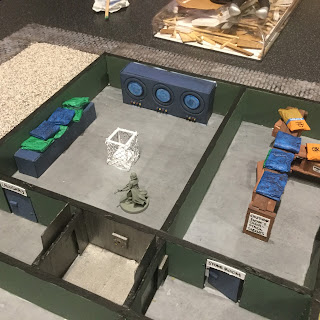 There are still loads of details to add, more posters and small bits as and when i think of them but that's the bulk of this level done.  The rest will be done later on and i'll also be putting together some corpses and bloody spots etc on bases that can be added to represent different points in the outbreak.  Let me know what you think so far, any suggestions welcome and i can either add it or put it into the next level.... 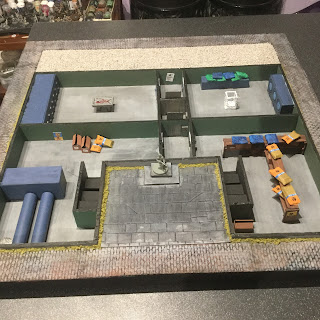