Gritting her teeth JJ grabbed the shotgun tighter and jammed the barrel through the open mouth of the zombie bearing down on her.  Pulling the trigger she heard the dry click of hammers on empty barrels and cursed loudly, pushing harder she felt the barrel tear through the back of zed's head and the monster dropped to the floor.  Pulling the gun back out she swung the stock and connected solidly with the forehead of a second zombie,  a loud crack accompanied the blow and the zombie keeled over.  A third grabbed the gun and started to pull at it, trying to get at Juliana.  Letting go of the shotgun she pulled her pistol and popped the z in the brain pan as it stumbled backwards. Ling Mei faced off against the last zombie and with her swords, slashed the creature to pieces.

Looking for the other two members of the group Ling Mei called softly for Nash and Debbie to pull themselves together.  Sheepishly the pair rose out from behind the bushes and avoided the deathly stare of JJ who had been left to fend for herself moments before. "Sorry lil lady, these dead folk are enough to cause me chest pains" apologised Nash Hambleton the former lounge singer, his face looking very grey and grave given credence to his statement.  "yeah sorry darling" said Debbie, a hangdog expression crossing her pretty face, all the time she was reloading the big ass sigs she carried.

"You fought like a tiger!" came a fresh, male voice from behind the group.  Spinning on their heels and bringing up various weapons, they came face to face with a young man, well face to chest as he towered over them by at least 6 inches.  Carrying a hunting rifle and accompanied by two other males, both considerably older than him, he carried on as if he didn't have a care in the world.  "Well done, nice to see someone else smashing these monsters into little bits instead of just running away."  Ling Mei considered the group of humans in front of her, taking into account the well armed nature of the men.  "Would you like to join us? we might have a better chance with all of us together." she asked.  The young man looked amused at the suggestion that he would need any help and shrugged before replying, "Naw i think we'll just head off all the same, thanks though."  with that he headed off up the street.

Within moments a half dozen zeds were barreling into the men and they were in a fight for their lives.  Before Ling Mei could act another zombie sprang out of the shadows and she was embroiled in a fight of her own.  Debbie began firing at a group of zeds a few yards up from them dropping them to the floor, one flopping around with broken legs and another still from the huge hole in its temple.  JJ joined in with her shotgun and "killed" two more.  Nash shrank back away from the gunfire, once again a greasy grey pallor to his lined face and clutching a hand to his chest.  Ling Mei dispatched her zed with contemptuous ease, looking up she saw the big youth smash the zombie he was facing to the ground with a pile driving blow from the butt of his rifle to join the already crumpled form of another zed.  One of the other guys was struggling with two zombies, with a loud cry he succeeded in downing the first with a terrific blow. But the effort cost him leaving him open to the grasp of the other zed, tumbling to the ground and smacking his head on the curbstone.  Before the zombie could bite down on him, the teenager grabbed it by the scruff of the neck and shook it like a terrier with a rat, breaking its neck and cracking its skull on the pavement.  The last man emptied the clip of his Glock into the pair he faced off with and they fell away with large parts of their faces bloodied.  Grabbing his companion and throwing him over his shoulder, the youth tipped a wink at Ling Mei and ran off down the road and out of sight.

"Quickly now, lets get these last couple of houses searched and get out of here.  Those gunshots are attracting more zombies by the minute."  with that Ling Mei directed Nash to cover the doorway while they went inside the first.  Nash nodded at took up a post, grateful that the young ladies could not see the pain that was coursing through his body. He was afraid of going in the house but he was more afraid of letting them down again so he clutched his pistol and the neck of his steel guitar tightly.  A short haired zombie drifted close to him and he dropped it with a well placed slug through the side of its face. "Are you lonesome tonight...." he sang, softly to himself.  The muffled sound of a single shot came from inside the house as Nash scanned the streets for any stragglers.  in the middle distance a few zombies shuffled closer.  "Come on, lets get it moving" he muttered.  With that Debbie came out of the house with a determined look on her face, "Ling Mei wants us to check out the last building while she finishes up in there."  She strode over to the house across the street and flung the doors open with Nash trailing behind her "nothing but a hound dog...." he sang checking the chamber of his revolver.

Rushing through the doors, guns up and tracking around the open plan living area.  Across the room emerging from the kitchen came two Guardsmen, the first an officer of some kind with a pistol in his hand and a private with a shouldered assault rifle.  The two groups seemed surprised at the presence of the other.  the officer was the first to recover, lifting his pistol pulling the trigger twice. 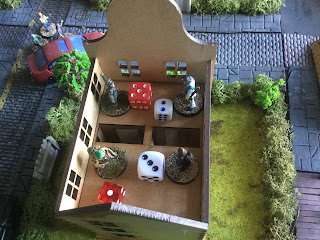 Both slugs breezed past Debbie's face, one drawing a thin red line on her cheek as it went.  The private fumbled for his rifle off of his shoulder getting the strap caught.  Debbie returned fire, her right hand sigsauer spat flaming death to the officer and he crumpled to his knees with blood pouring from the wound in his neck.  Her left sauer aimed at the private, took him out with a slug to the knee before Nash calmly unloaded his .45 into him.  "Sorry boys, but can't have you hurting the lady now."  Searching the bodies they stripped them of their body armour and weapons, finding a grenade in the pack of the officer.  With a final salute to the fallen, Nash and Debbie left the building meeting Ling Mei and JJ in the street. 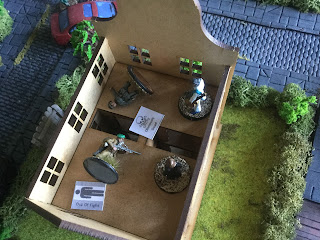 Outside there were more zombies gathering, Ling Mei let fly with an arrow at the closest and dropped it soundlessly to the floor.  Storm clouds were thickening the air and the first, fat drops of rain began falling from the sky.  Ling Mei looked at what they had gathered so far and determined it was enough to be going on with.  Signalling to the others she ran off up the road and headed home.

# a tense encounter that achieved its objectives with each of the group gaining some supplies and escaping the encounter.  JJ after an awesome fight has earned a rep increase to 4, although poor Ling Mei still has not.  Some milestones to survivor have been reached by the group, only Ling Mei has seen the feast so they are still counted as citizens for the next encounter.  Finally Ling Mei manages to roll very well with the keeping it together and will not have to roll after the next encounter (which turns out to be fortunate!)