This week we move onto the superstars of the BB world - Blitzers! 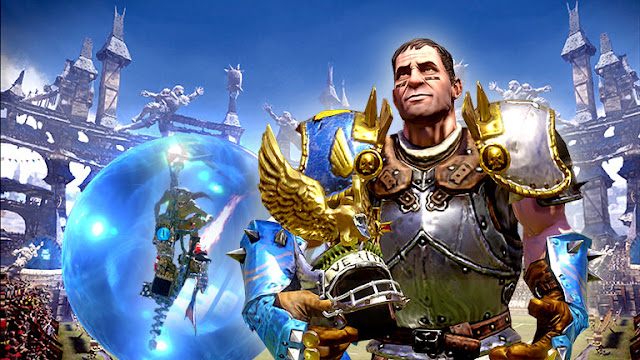 Blitzers are fast, agile, strong humans - FLASH!! These guys run rings around hulking Blockers, punch the lights out of hapless Linemen and score as many TDs as Catchers, without the inherent squishiness of the lightly armoured specialists. And if you doubt my reasons for taking humans as my go-to team, you can have FOUR of them. 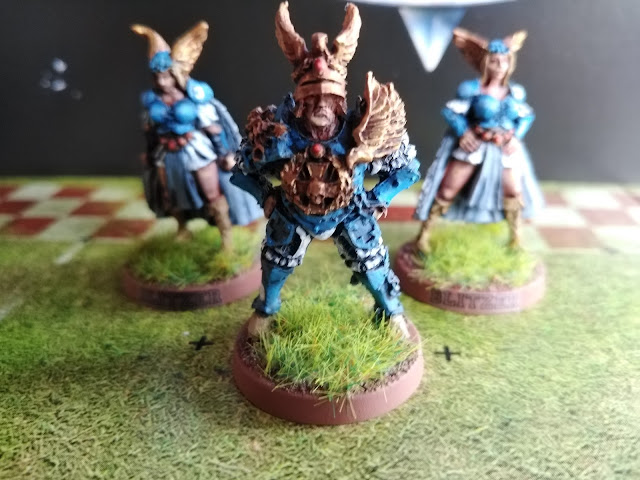 Star Player - Griff Oberwald - sculpt by Black Scorpion Miniatures.  I won't actually be using him in my team but he looked too good not to buy when I bought my starting Blitzer models from the same company... 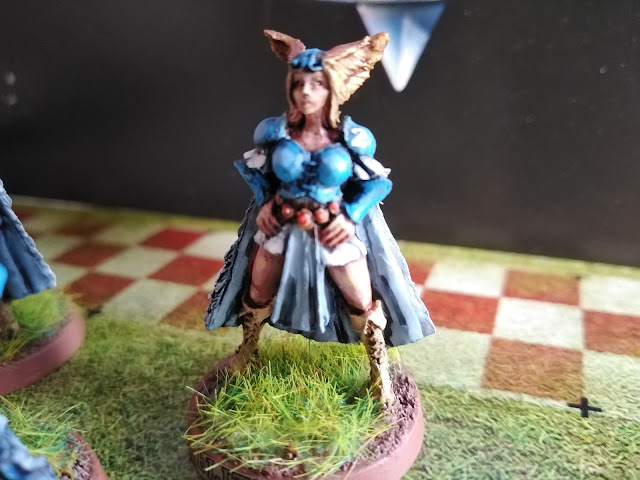 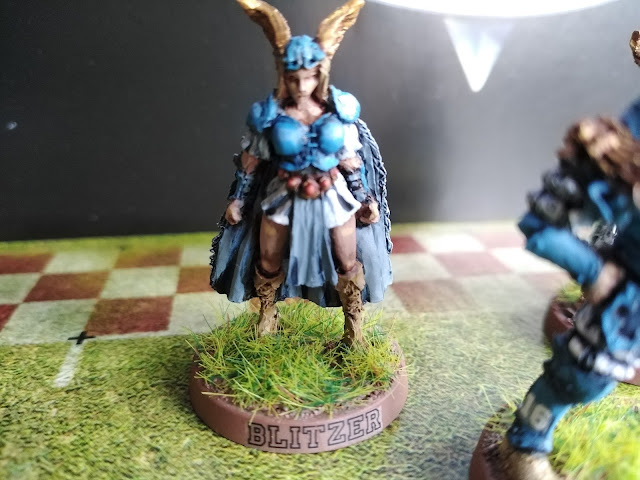 
Gurti and Hildi Hurtidottir are the twin daughters of the notorious underworld boss Hurti Armsson, friend and lieutenant of da Gobbo.  These brutal Norscan warriors are the scourge of the BB field - quick, strong and ferocious, these females batter their male counterparts with a sneer on their angelic faces.  The lack of any substantial scarring on them is a testament to their prowess on the field. 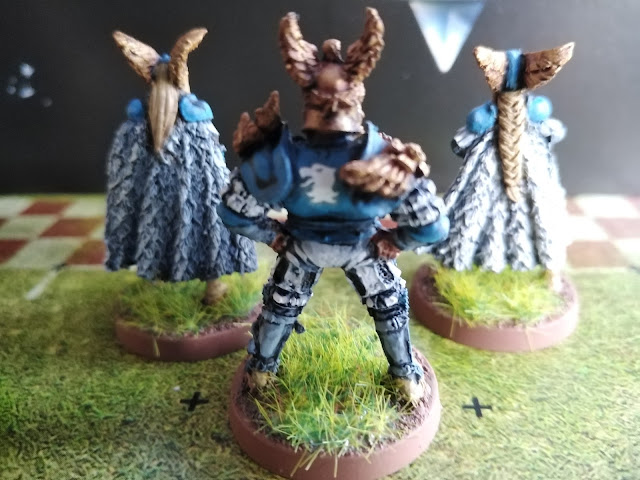 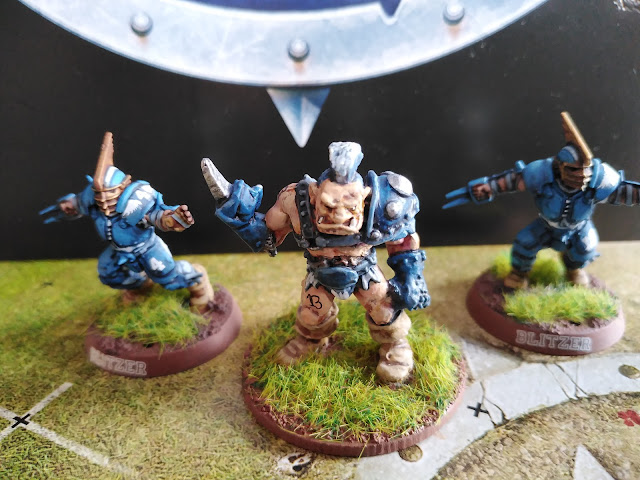 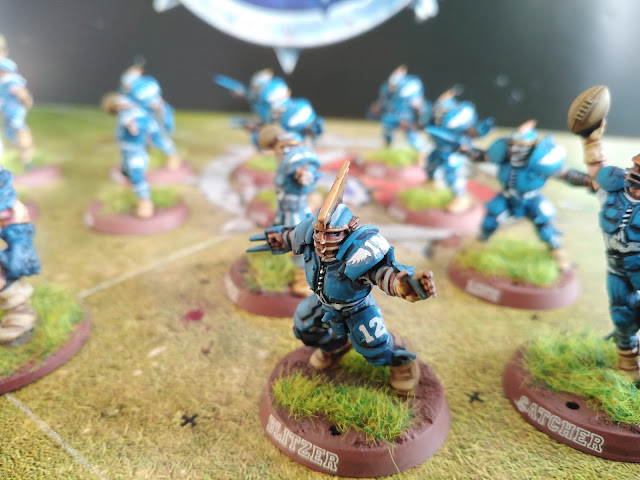 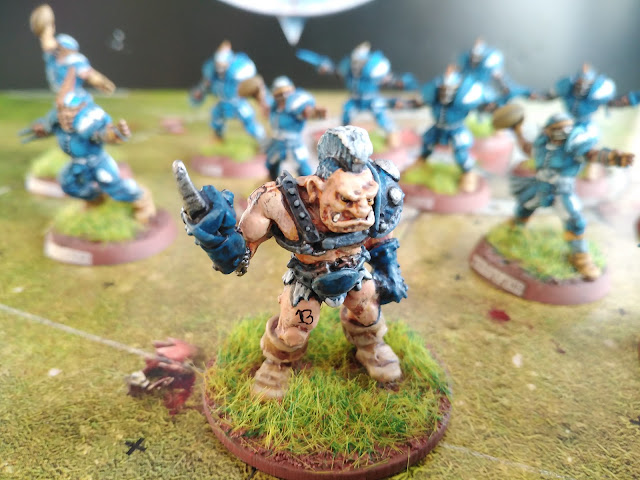 "Flash" Harold is a local lad, plucked from the streets of Ubersreik shady shanty town by da Gobbo himself. The boy, known then as "Dirty" Harry, cut the purse of da Gobbo's favourite nephew and evaded his bodyguards with ease, knocking one of the hulking ogres on its backside.  After tracking him down to his filthy hovel, da Gobbo surprised his retainers by offering Harry a position on his fledgling BB team.  Cleaned up and fed on good, nutritious food Harold, as he insists on being called, has emerged as one to watch by those who know the game.

"Stumpy" Grimpaunch is unlike most Ogres. Standing at just 7 and half feet tall, he is short for his species, added to that he is fairly trim around the middle.  These attributes caused him to be driven from his tribe as a "runt".  Found by agents of da Gobbo wandering the foothills of the Grey Mountains, he was smuggled into the city and welcomed into the underworld of the Ubersreik as an enforcer for da Gobbo.  Soon it became very clear that his talent of turning his victims into paste was suited to the BB field!

"Brutal" Burt is not currently in my line up but the mini is there to be added as and when the team develops. "Stumpy" is a second ed Ogre mini and shows the level of scale creep prevalent in GW at the mo, with the humans nearly reaching his height.  But I really like the model and as he was one I already owned it was a no-brainer.

The twins are awesome 32mm resin models from Black Scorpion, that were the result of a 3am google search one night. There are some great minis out there but the cost is so prohibitive, these beauts were just a £5 for the pair...