Behind every powerful man is...


Today's look at my BB team - The Ubersreik Underworld, I'll be focussing on those folks who support the team, on the field and off - the coaching staff! 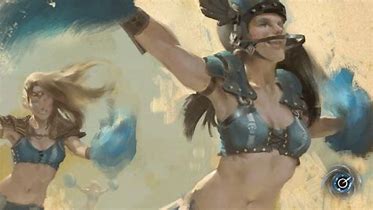 The Double U's are supported by a whole host of staff, from medical to coaching to cheering.  Da Gobbo has used his shady influence to assemble some of the best in their field.

Starting with Head Coach - Lucille de la Negan. Right hand woman to da Gobbo, Lucille hails from Tilea and was a chief lieutenant for the crimelord's underworld empire before being asked to look after the head honcho's pet project.  A stern disciplinarian, she emphasises her plays with her favourite club "Rick", woe betide the BB player who steps out of line... 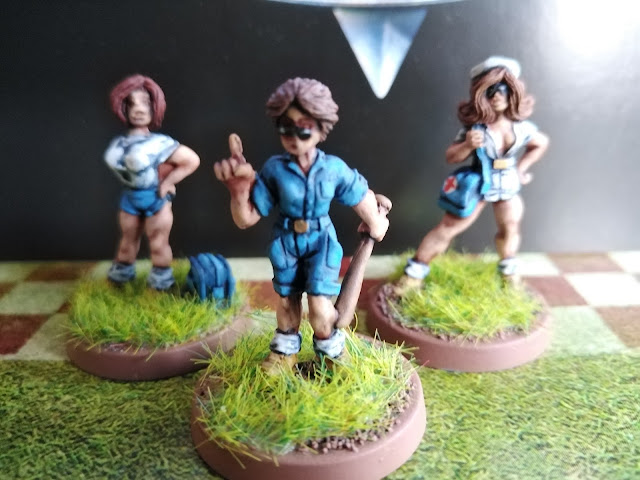 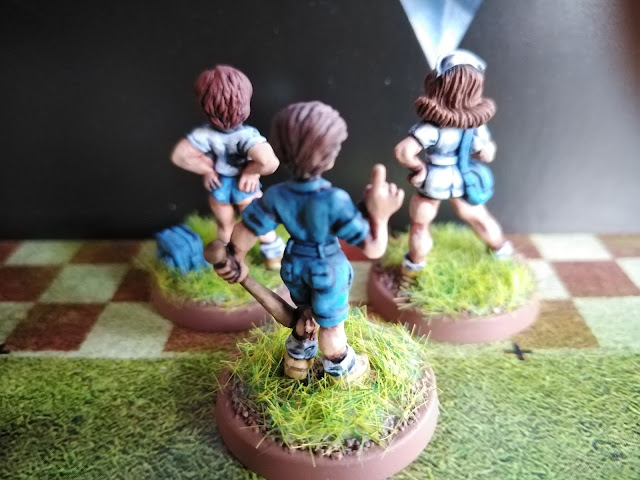 Next up is Nurse Netti.  Netti is, or rather was a back alley butcher.  One of the shady sawbones that criminals go to, to get patched up no questions asked. When she was younger, the naïve Netti applied for the Imperial School of Physicians, keen to become the first female doctor! She was soon to come up against the closed ranks of the male dominated profession and rudely told to join the Cult of Shallya. Netti, red cheeked and shamed left vowing to show the "fusty-brained old codgers!" Netti broke into the college library and stole several tomes on surgery and medicine. Unfortunately for her she was caught on the way out with the books in a sack by her feet. Fortunately for her the guard, a distant cousin of da Gobbo, handed her over to the Boss and her training began!  Now she acts as the team Apothocary, patching up the players with depressing regularity... 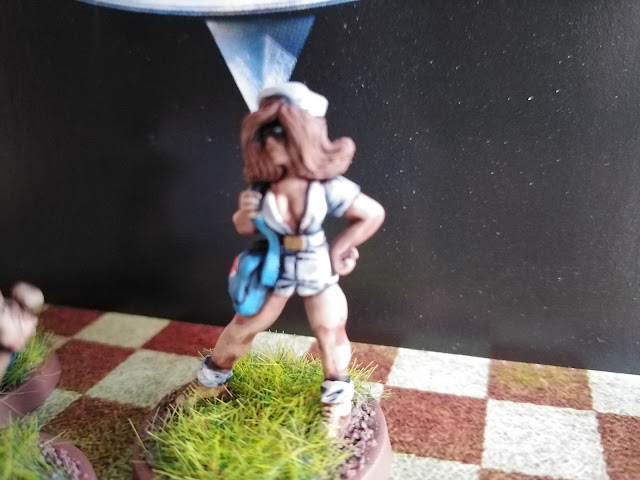 Next, we have Patti "the Pulveriser" Ponterweld, the team physio and assistant coach.  The Pulveriser is a heartless, merciless driver for the physical perfection of her players.  Pushing the team to staggering heights of fitness, she works as hard as those she coaches, running laps alongside her charges without a drop of sweat on her brow!  On match day she acts in her capacity as assistant coach, working with coach de la Negan to shape the plays and berate the players she sees as "slacking". 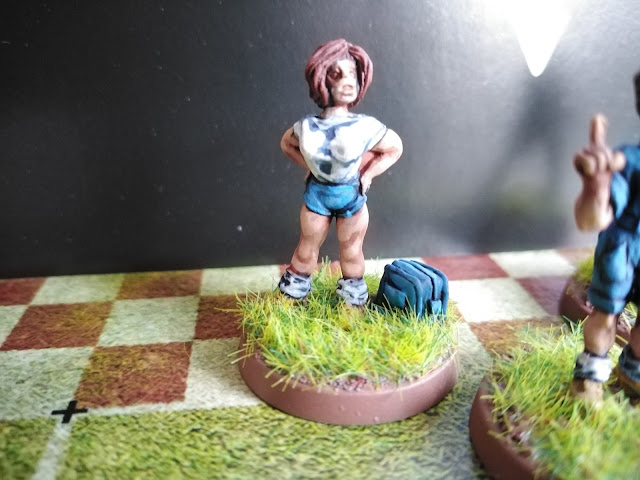 Finally we have the "Double D's" the cheer squad for the Double U's. Led by the acerbic Andrea Hoffman, the Double D's are not just pretty faces, they drive the fans into a frenzy with their provocative cheers and dance routines. 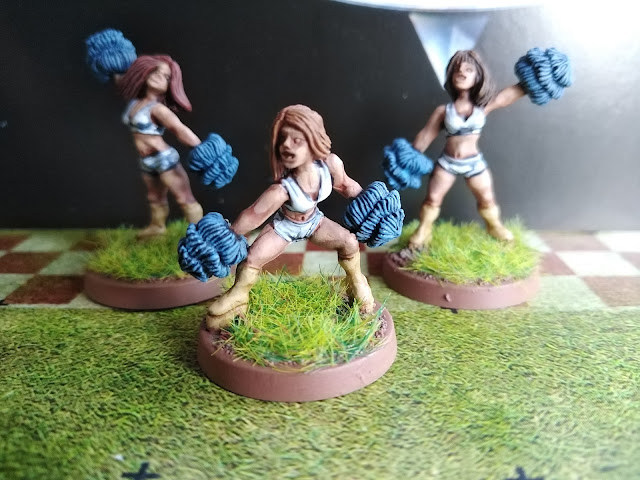 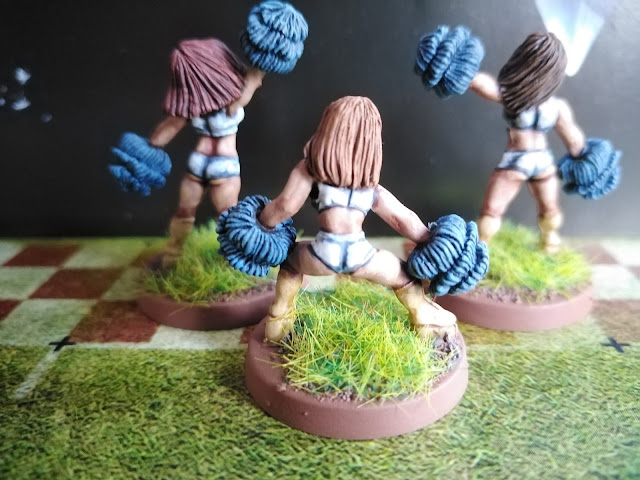 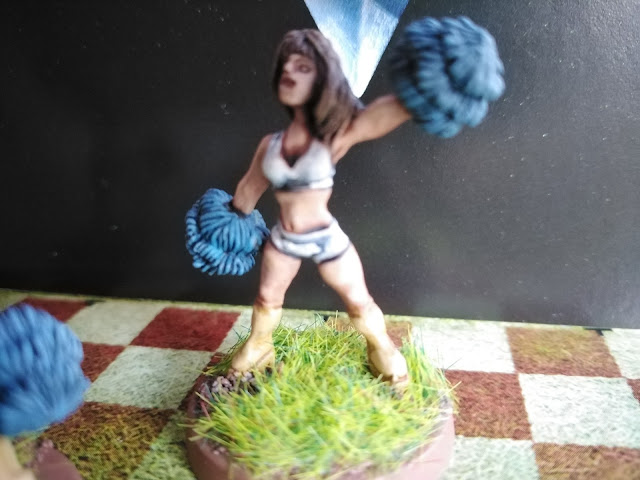 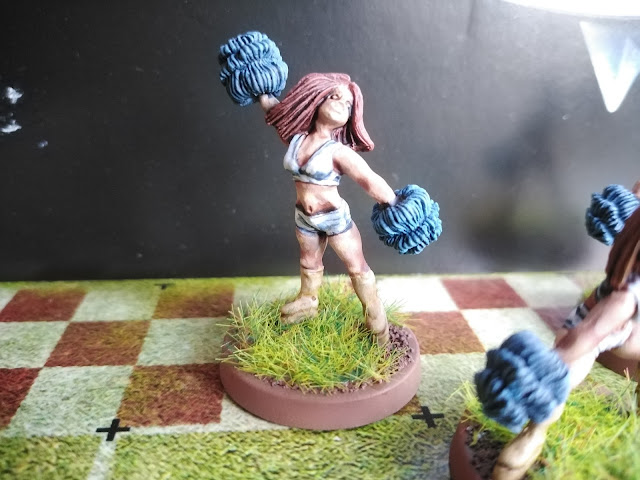 All the back room staff minis are from Shadowforge. The faces of the minis are all a little weird but all in all they are good representatives of the staff, so I'm happy with them.

That's it for look at the team, hopefully its onwards and upwards for the U's and I can bring you some match reports.