Mizuki Ito cursed the Prefecture fools again, rearing up on her powerful coils, she watched as the Dragon clan deployed for battle.  Why her would be allies had decided to betray her she could only guess.  The alliance would have allowed them to take the fight to the Jung pirates that had plagued the Islands over the last few months and put an end to their raids. It made no sense to her why the ruling clan would not want to put an end to the pirates? Regardless they had decided to not only dishonour the treatise, but to attack her retinue. The betrayal was doubly offensive and could only be repaid in blood.

Looking left to right, she watched her kin deploy with grim determination. The giant Hebi samurai - Taisei, with his No-Dachi would protect the smaller Hebi archer - Kaihime, her poisoned arrows would be vital in keeping the foe at bay. On the other flank, Yuui, the last of the Hebi samurai in her retinue and armed with twin swords, slithered around the base of the ancient statue and took up her position.  Either side of her stood the only bipedal members of her warband. Ji, the Temple Asp stood close by his priestess, the tight grip on his katana the only sign of nerves showing, his devout faith in her and Orachi would ensure his bravery in the coming fight.  Lastly, the mysterious Hebimiman - Akimoto the Red stood stock still, his glittering cobra eyes fixed on the approaching enemy. 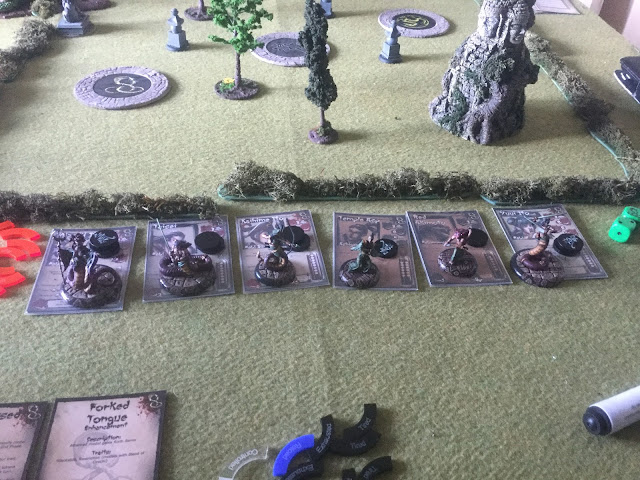 Arrayed before her, the Dragon clan retinue spread out.  The young lord Hiro Takashi led the delegation, flanked by the ward of the court - Iiju Makoto.  Two minor members of the Takashi family lurked in or around the two lords, clearly there to provide a bodyguard for the nobles. More astonishingly, the rumours were true - one of the legendary dragons had risen from their slumber to aid the Takashi family in consolidating their hold on the Prefecture, although Mizuchi was young by dragon standards, he still counted his age in centuries. 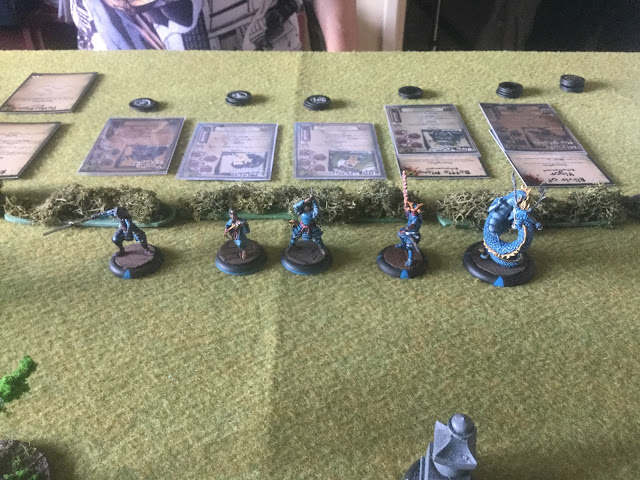 Under the watchful eyes of the colourful statue of the great wyrm Sui Riu, the Prefecture fools marched toward the Mother and her kin. 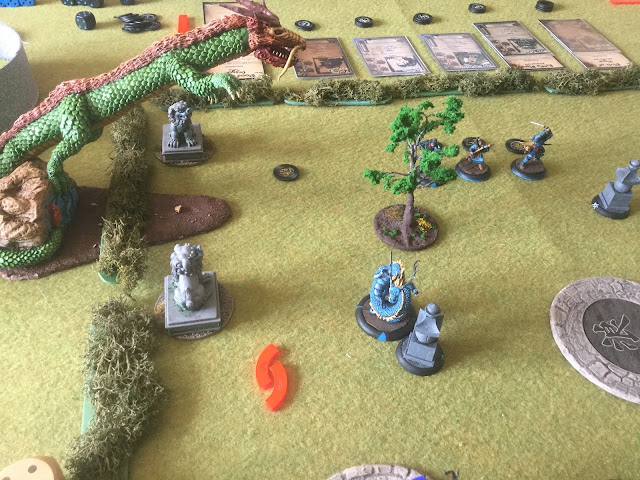 "My family, let us show these treacherous creatures Orachi's disfavour, let my husband's poison run through their veins and show them we are not to be betrayed!" she shrieked.

Kahime the archer bowed her head and slithered quickly forward, raising her bow and loosing a shaft in one quick motion.  The arrow flew true and lodged in the elbow guard of the male retainer's armour, with a yelp the man withdrew his arm and tugged at the willow shaft until it dropped free, a tiny drop of blood on it's point.  Grimly he marched on, heading toward the centre of the small garden where the two clans fought. 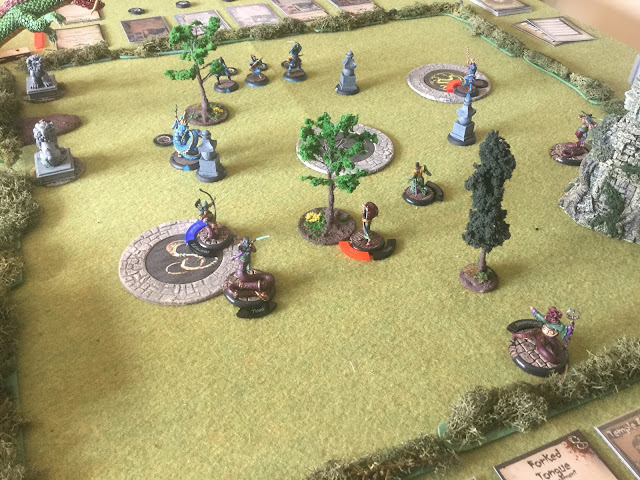 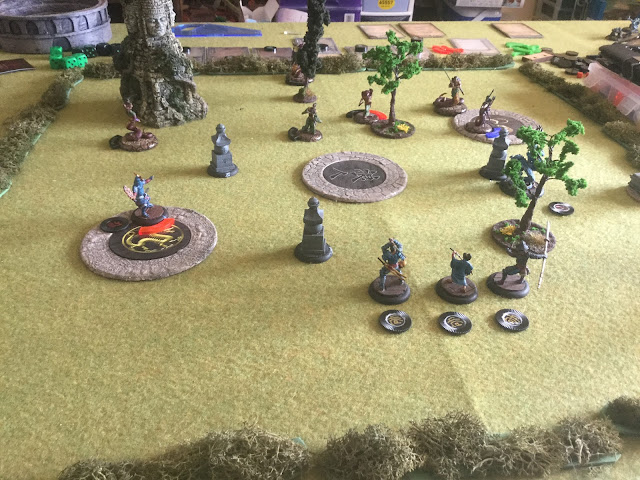 Taisei raised his huge No-Dachi and rushed forward to cover the more vulnerable Kahime from the melee orientated Prefecture, his massive presence a comfort to the smaller hebi as she forced the enemy to find cover from her arrows.  Akimoto the Red, focused on the steady advance of his prey, sprang forward and spat a length of bile green poison at the approaching Dragon clan.  Iiju Makoto, ward of the court and scion of the Hare clan ducked the deadly stream and continued his approach, breaking into a swift run just before crashing into the hebimiman with his armoured form.  The slighter, unarmoured Akimoto was bowled over by the young samurai, who followed up the attack with a slash from his two handed sword.  The heavy weapon tore through the thick neck of the snake man, decapitating the monstrous beast with a single blow. 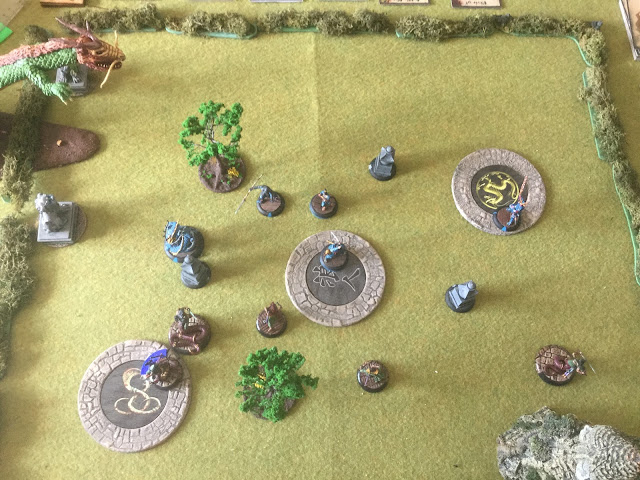 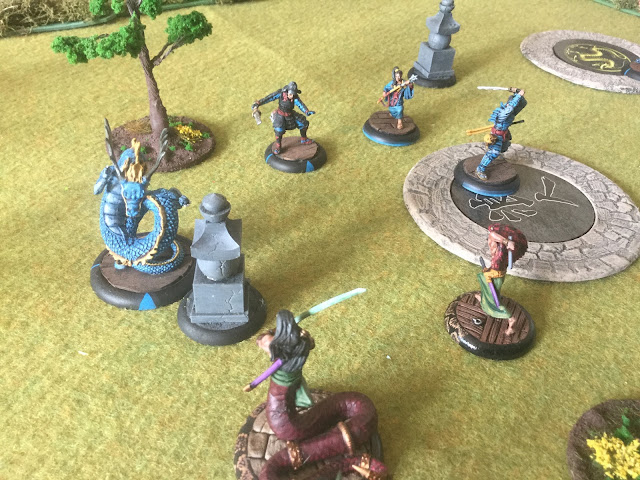 Mizuki shrieked with dismay as she saw a loyal warrior fall to the big human.  Fixing Iiju with her burning gaze, she drew on her considerable Ki, transfixing the young man like a mouse under the control of a striking viper.  Dreamily, the ward lowered his weapon and slumped his shoulders as the Bride of Orachi sapped his will and implanted suggestions into his now receptive mind. 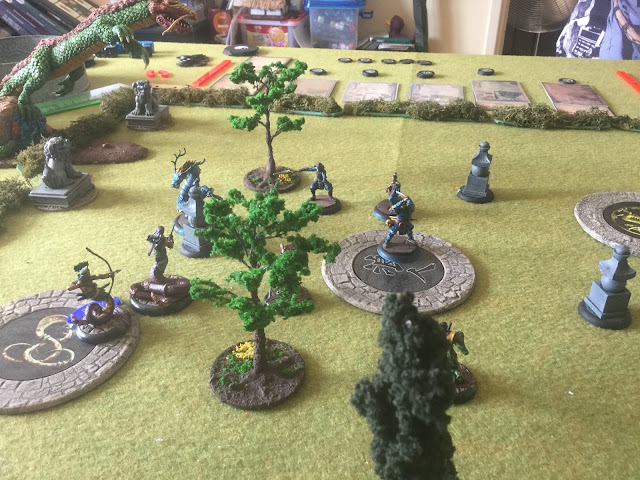 Unaware of this uneven battle of wills, the female retainer Bachiko Takashi strode up behind the transfixed young man, urging him to advance on the nearby Ito Bushi.  With a snarl, the ward spun on his heel and swung his sword one-handed at the slight female.  Taken by surprise, Bachiko barely had the wherewithal to parry the massive blade and narrowly avoided a grievous wound.  A series of attacks followed, pushing the retainer to the very edge of her skills in an effort to defend herself.  The glazed look in Makoto's eyes enough for her to consider him bewitched, she painstakingly avoided any retaliation. 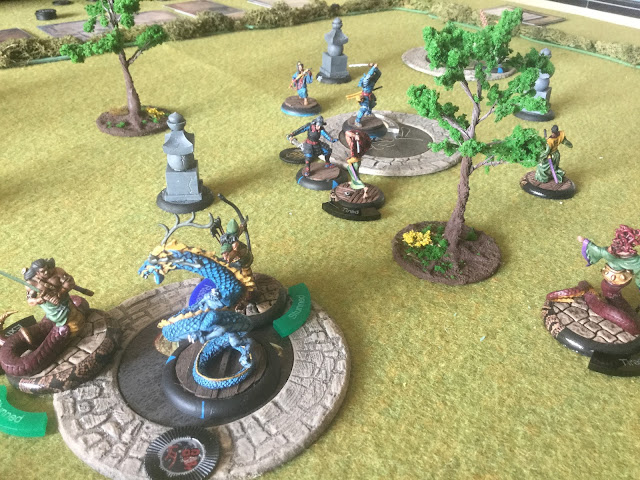 Ji the Ito Temple Bushi, took advantage of the distracted samurai and lept into combat with the male Takashi guard.  Screaming prayers to his god, the acolyte of Orachi delivered a withering series of slashes and blows in an effort to get past the darting point of the guards yari, to no avail as the two combatants fought to a stalemate.

On the left flank Mizuchi the dragon launched himself into the air and darted over the towering form of Taisei, landing in between the two hebi-samurai.  With lightning flicks of his muscular tail, the great beast delivered stunning blows to the snake warriors. 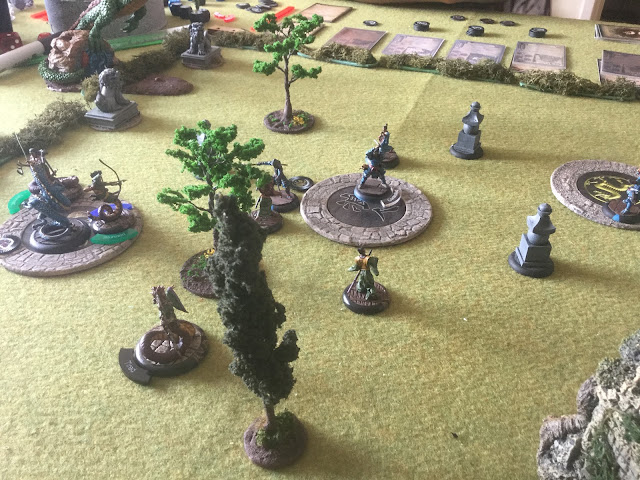 On the other flank, Hiro charged forward, his katana held high above his right shoulder ready to deliver a killing blow to Yuui, the female hebi warrior.  With precision he swept the blade down and wide only to feel the clash of steel on steel as the snake woman parried the strike with her left hand blade. Drawing his own sword back he launched a series of swift strikes that kept the Ito warrior on the defensive, ringing her twin blades with a speed that belied his single weapon.  However, Yuui was able to deflect all of the blows with only minor scrapes to show for his effort.  With the speed of a striking serpent, the hebi samurai uncoiled her muscular body and wrapped her strong tail around the human, pinning one of his arms to his side while hacking with her blades.  Hiro struggled to keep up with the lightning fast attacks and only his heavy armour kept him from receiving a major injury. 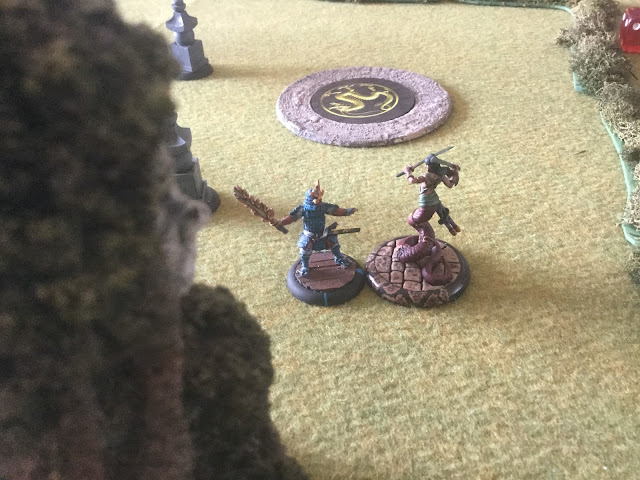 Strategically placed between the two snake samurai, Mizuchi the dragon launched itself at the unguarded back of the archer, sinking it's dagger sized talons into her back and piercing her heart.  With a sigh, the archer slumped lifelessly to the floor. 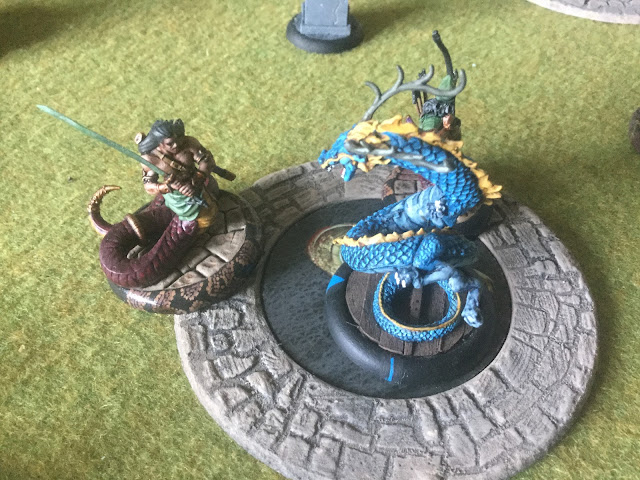 Mizuki, the bride of Orachi once again exerted her will on the ward of the Ryu court in an attempt to keep up the attack on the female retainer. With a trembling hand, Iiju Makato reached for a fetish tied onto his armour with a red sash. The Ki laced parchment flashed a bright silvery light, before crumbling into dust.  However the insidious hold on the scion of the Hare clan was broken and he turned on the spot to face down the oncoming Temple Asp.  The Ito Bushi grimly drew his katana and fought bravely, if not well, but eventually he succumbed to a well placed thrust of Iiju's sword.

The ward turned to the others, raising his blade in victory only to see the grey/green pallor of the male retainer.  "Han, what is it?" the ward barely had time to ask before the soldier dropped his yari from fingers that no longer had the strength to hold it. The retainer looked confused as he bent over to vomit a stream of green tinged bile onto the floor, then crashed to the ground in a heap.  Iiju, confused by the turn of events rushed to Han's side when he spotted the putrifying flesh wound at the soldier's elbow... poison! 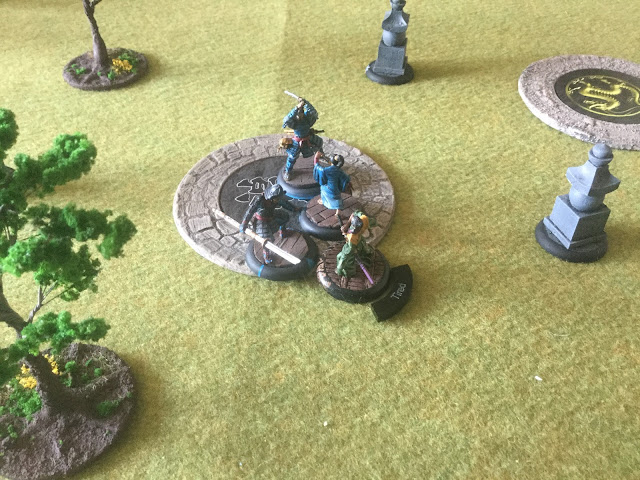 Mizuki, the young dragon whipped his tail again and again at the enraged Taisei, desperate to keep the giant snake samurai at bay.  Time and again though, the hebi met the tail with his giant No-Dachi, the blade glistening with acid green poison.  Small nicks covered the length of the adolescent creatures scaly form and the dragon began to visibly slow as each cut penetrated his natural armour. 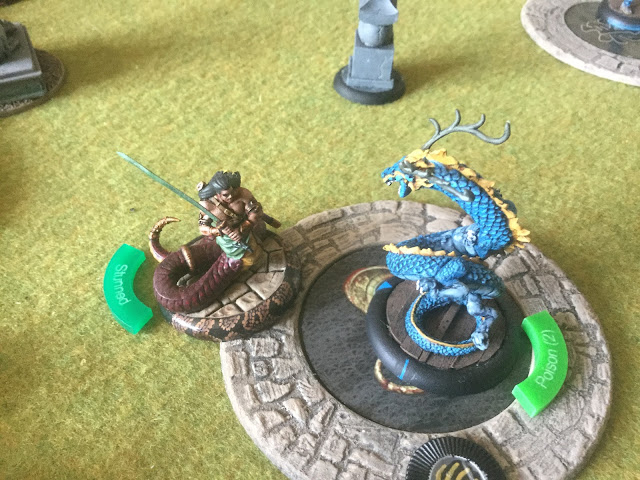 Hiro, slashed and stabbed with his katana, desperate to break the tenuous hold of the snake-woman's grasp.  However, the hebi samurai refused to let go and eventually more and more of her coils wrapped around the young lord, squeezing his torso until his armour plates began to buckle. 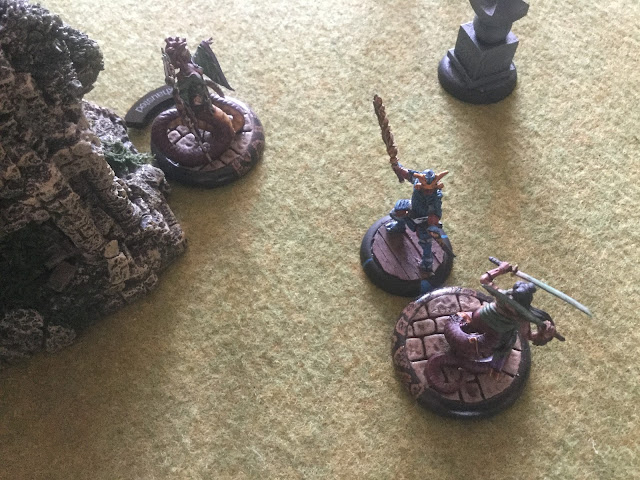 Poison coursed through the veins of the young dragon, the neuro toxin slowing his reactions and weakening his blows. In response the giant hebi samurai gripped his No-Dachi in both hands and lifting his upper body high on his snake-like lower half he drove the massive blade clean through the beast. 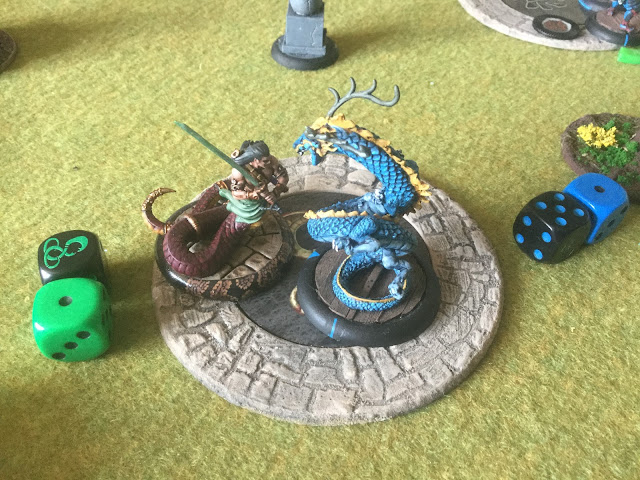 Mizuchi, screeched in delight as she watched the symbol of the Takashi clan fall to the floor in two separate pieces.  Gathering her Ki, she once again settled her gaze on Iiju and with an effort of will forced the ward to flee the battlefield, his cheeks flaming red with the shame.  Flushed with success, she nearly missed the quiet approach of the Takashi female, barely managing to deflect the swift strikes of the retainer's katana. 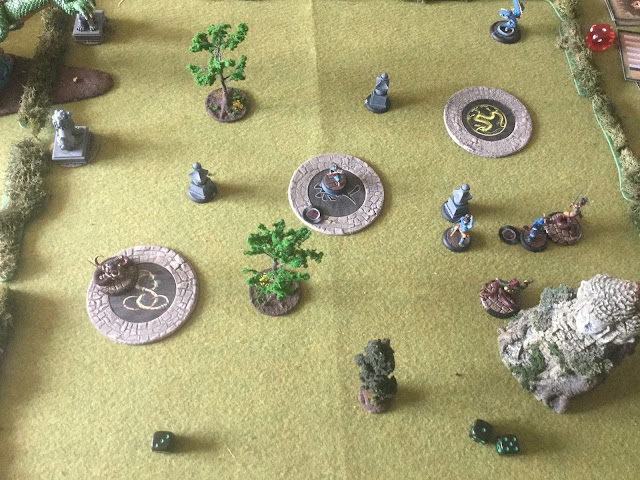 Desperately, the bride of Orachi parried the blows from the fearsome female, slowly but surely being driven backward toward the struggling Hiro.  As she fought for her very life, her concentration slipped and the control that she exerted over the ward Iiju wavered allowing the ward to break her hold over him.

Desperate to regain his honour, he broke into a trot and ran back toward the engagement, a grim smile on his face as he pictured his revenge. 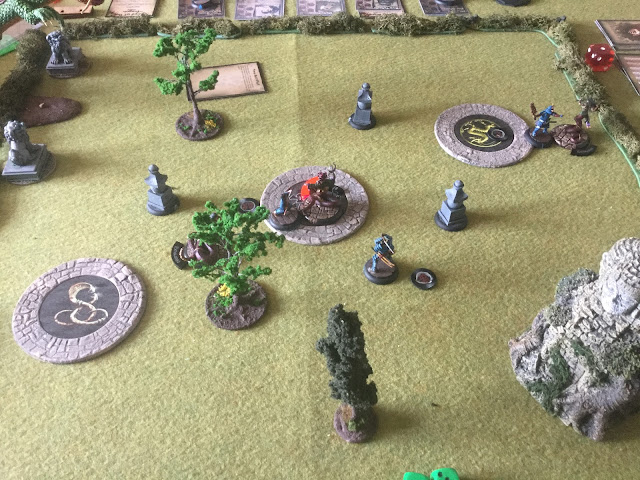 From beneath a low bush on the edges of the battleground, a soft black nose pushed out of the foliage, followed by the orange brown snout of a fox.  With glittering eyes the creature watched as the two retinues continued to spend their strength in futile combat. Finally, the crafty beast had seen enough and withdrew silently into the surrounding woods, slinking away.  It's mission had been a resounding success, the treaty would never be and the Balance was safe.....for now.