over the last couple of weeks I have been laying the groundwork for a short series of games of Bushido.  The games, played by Damon and I aren't particularly linked but I have taken them and turned them into a narrative AAR.  There won't be any rules or "he threw a double 6", just a short story each week that gives you a flavour of the games played (or how I remember them!) in, what I hope is an entertaining way.

I hope you enjoy
dGG

Master Akari drew deep on the Ki that flowed through him and slowly the images became clearer and more focused. 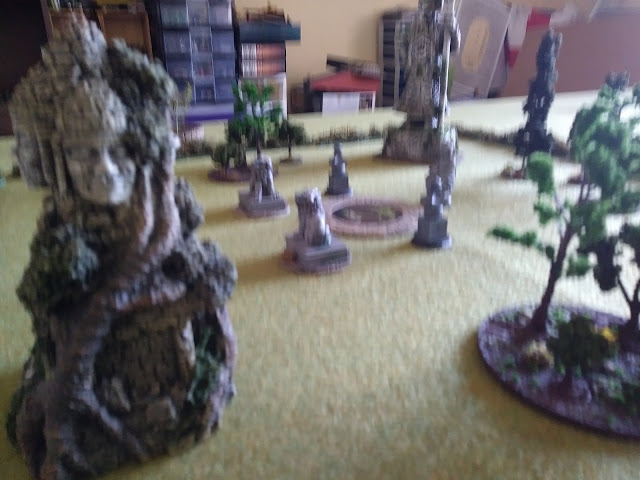 His band of Righteous Warriors took shape until he could picture them clearly. The stalwart Kosuke, a visiting monk from the distant reaches of the Empire. The child Shugenja, Aiko and her powerful Guardian, a huge silverback mountain gorilla. The orphan boy, Koji and his pack of villainous monkeys and lastly Kuma, the giant Panda warrior.... "wait, was that a flash of red fur?" the Tanuki mused as a sleek creature streaked out from under some foliage.

To his surprise (particularly as this was HIS probability thread), the shape coalesced into the form of a Kitsune, who stood ready to fight alongside his fellow monks.  The enigmatic yokai often had their own reasons for lending aid to the Temple, but it was always welcomed, albeit with a sharp eye kept on them... 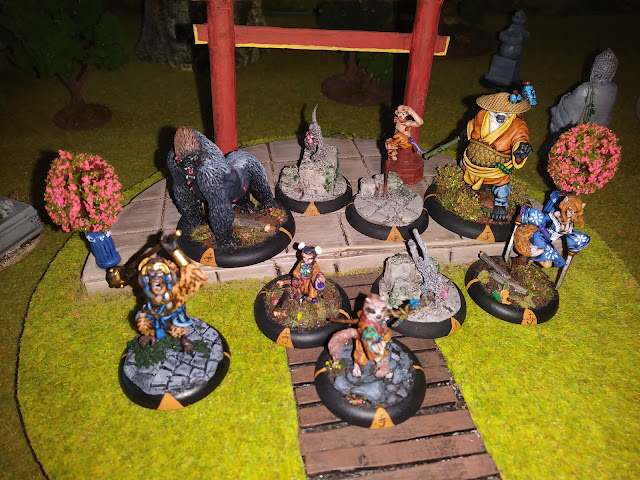 Akari recognised the young lordling that led the retinue, Hiro, a scion of the ruling family Takashi.  He was beginning to make quite a name for himself, both as a warrior and a general.  With him was a ward of the Hare clan - Iiju Makoto and a couple of retainers from House Takashi. Most impressively though, the samurai had managed to persuade the juvenile dragon Mizuchi to join him on the expedition - clearly the messages contained in that bag were pivotal! 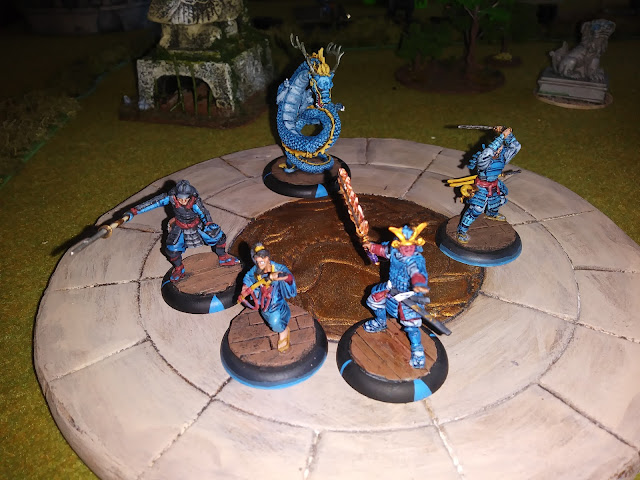 Akari sat back, figuratively, on his haunches and watched to see how the encounter would unfurl. 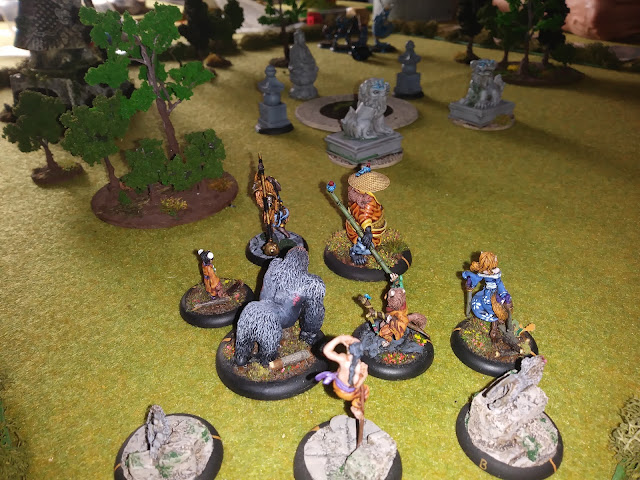 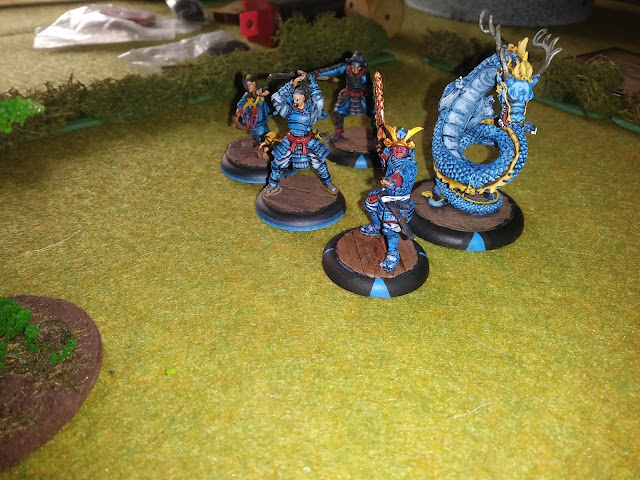 With a huge snort through his simian nostrils, Kosuke lumbered forward.  His waddling gait belied the speed that he moved over the rough ground of the forest floor and he soon crashed into the armoured form of Hiro Takashi.  Swinging his huge club in a low arc, easily avoided by the young samurai, Kosuke followed through with a series of feints that used the handle and head of the great weapon in tandem to keep the lordling on the back foot.  Finally he finished his sequence with a flourish, pivoting on a single leg he grabbed the surprised Takashi with his other foot and using the weight of the giant club to gain momentum flung the samurai to the floor several feet away. 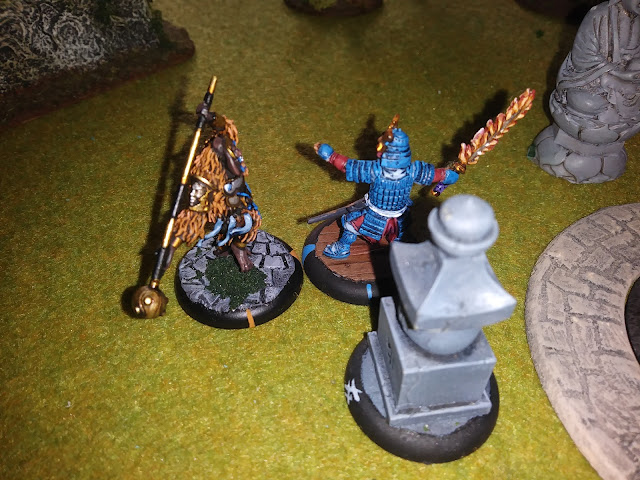 Both warbands rushed forward, the Takashi retinue keeping tight around their messenger and the juvenile Dragon taking to the air with a triumphant scream.  Aiko's Guardian responded with a huge roar that shook the trees around them, beating his mighty fists against his enormous chest.

The powerful gorilla leapt forward and grabbed the dragon by it's tail disrupting its flight and bringing the creature back down to earth.  Matching the ferocity of the giant primate, the dragon ripped at the beast with it's talons drawing red furrows into his hide.
Aiko, watching her mighty protector taking hideous wounds drew on her Ki, with a wave of her delicate hand she sent a stream of spirit energy toward her burly companion, easing his pain and partially healing the grievous wounds. 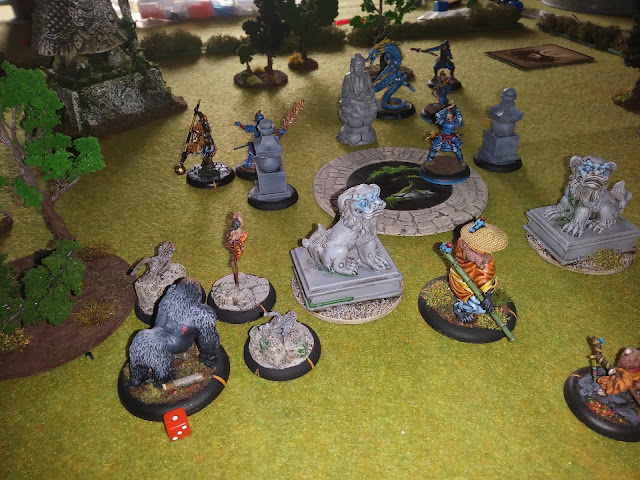 Buoyed with renewed vigour, the Guardian pounded on the muscular flanks of the dragon, dislodging scales and winding the powerful creature. In retaliation, Mizuchi latched onto the massive arm of the simian and drove it's dagger length teeth to the bone.  Too late the young dragon realised it's mistake as the gorilla with a roar of defiance simply smashed his arm into the earth with a jarring crunch that stunned the magnificent serpent.

With incredible speed, the Kitsune shrunk into fox form and dashed forward. Ducking under the flailing dragon, locked in it's struggle with Aiko's Guardian, she emerged next to the struggling behemoths.  With a brief shimmer, she once again regained humanoid form and lunging forward with her sword, tore a long and mortal wound down the length of Mizuchi.

Iiju Makoto, cried out at the loss of his adopted clan's kami and charged forward intent on severing the tricky Yokai's head.  Sword held high, he slashed at the Kitsune, only to stumble to the ground when the magnificent blade failed to connect.  Shaking his head in puzzlement, the Takashi ward looked around only to find the Kitsune yards away, a smirk upon her fox-like features.  The mirage of her slowly fading away as Iiju screamed his frustration at the mischievous creature. 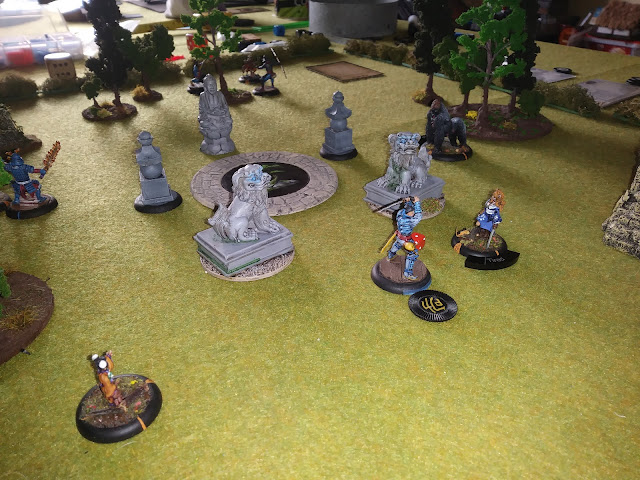 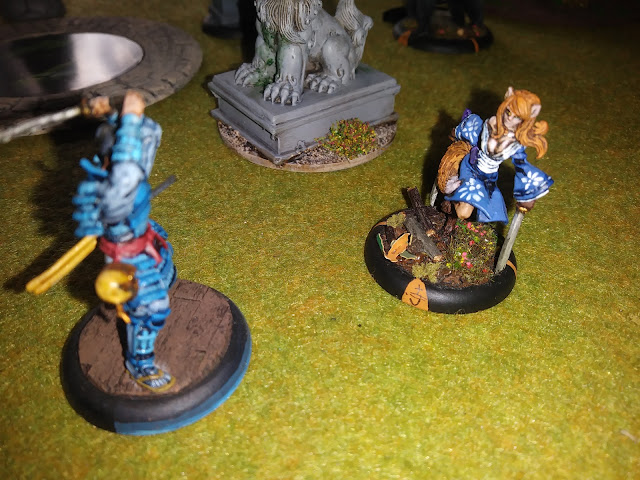 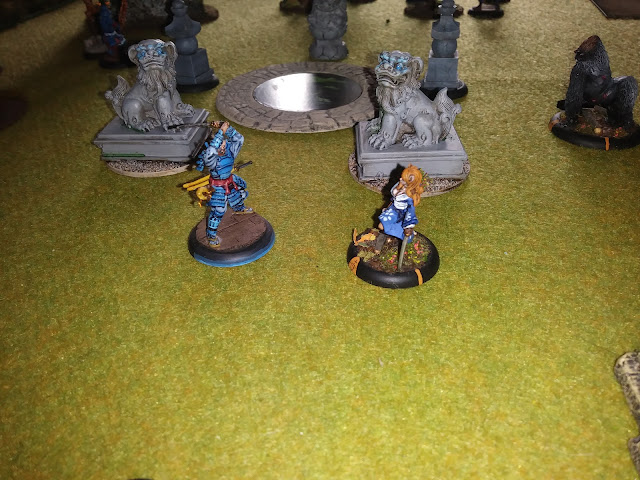 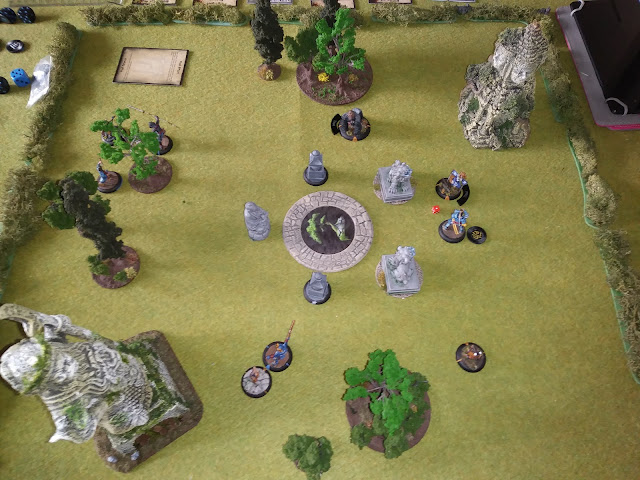 So far so good, Akari muttered to himself with a small satisfaction.  The dragon had been neutralised and his warband were in position to intercept the messenger, disrupting the plans of the Prefecture and the Ito and their disastrous impact on the Balance.

Hiro shook his head to clear his vision, further aided when he adjusted the tilt of his helmet.  Skittering away from the powerful orangutan, the samurai adjusted his grip on his katana ready to re-engage the simian monk.  Before he took one step however, he was confronted by a small, wiry boy armed with a Bo staff.

With a wave of frustration, he motioned for the boy to move aside.  To his amazement, the boy not only shook his head but with a wry smile stepped forward and levelled the staff at the astonished samurai. Shrugging his shoulders the Takashi lord readied his sword and took stance. 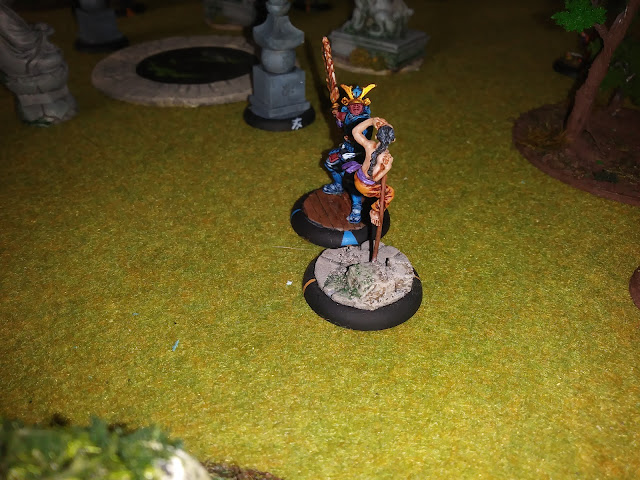 Before he could engage, the boy pursed his lips and gave an odd little whistle.  Another step was all Hiro managed before two brown bullets shot from the dense undergrowth of the forest trails and flung themselves at the lordling.  Two mature macaque monkeys clung to his arms, interrupting his movements and causing him to slow and drop his guard.  In a flash, the boy darted forward and swung the Bo in a hefty blow that rang Hiro's helm like a bell.  Stumbling backwards, Hiro almost crashed against the stocky build of the Temple monk Kosuke… 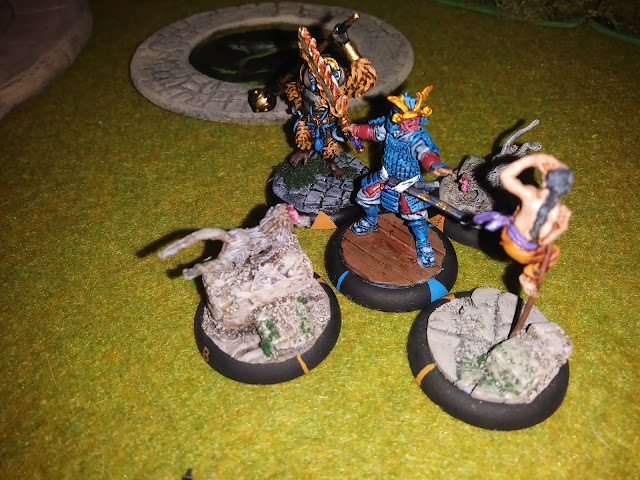 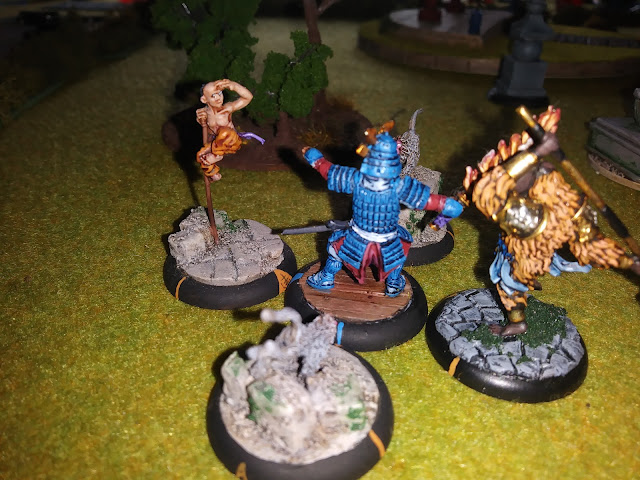 Hiro shook his head again to clear the fog from the child's blow, enough was enough! With an armoured gauntlet he reached across and in a swift move, snapped the neck of the macaque dangling from his arm.  With his sword hand free he parried the incensed boy's attacks.  Calmly, he stepped aside as the giant brass shod club thumped to the ground beside him.  With a swing of his other arm he threw the remaining monkey away from him, the tiny macaque colliding with a tree trunk with a bone crunching crack.  Once again he parried the increasingly erratic swings from the grieving boy, before stepping in and delivering a stunning kick that propelled the boy backwards to land in a crumpled heap.  Finally free from the annoyance of the child and his pets, Hiro faced the powerful orangutan.  Wise to the four limbed attacks of the beast now he drew deep upon his Ki and cleansed the fatigue from his limbs.

Narrowing his eyes, concentration at peak, Hiro launched a series of blows and feints that defied the laws of physics.  His katana flickered faster than a serpents tongue, cutting and slicing, forcing the simian's defences further and further away from his body until the precise moment came. With Ki boosted strength he powered the blade through the bronze chest plate of the ape and split the creature's heart in two.  With another sigh from his simian nostrils, the great ape slid to the floor.

Barely had he drawn the long blade from the orangutan's body when the air was shattered with the bestial roar of the giant panda monk.  Kuma - his fang lined snout pulled back in a snarl, sprang forward... to be met with a sweep of Hiro's katana. Stepping nimbly to one side, despite his cumbersome armour, Hiro drew his magnificent blade back and sheathed it in a single motion.  The monk stumbled forward for two more steps before crashing to the ground, his throat opened wide pouring his blood into the earth...

"No more!" shouted Akari as he withdrew his consciousness from the thread.  Slowly the picture unravelled as he once again became pure spirit energy.  The cost was too high!  The loss was too much to bear.  There had to be a better way and he had to find it now.

Email ThisBlogThis!Share to TwitterShare to FacebookShare to Pinterest
Labels: Bushido, Prefecture of Ryu, Temple of Ro-Kan