I've finally managed to get all of the previous episodes of my ATZ campaign in a single page and I will be updating it with each new episode as it comes.  Having just re-read them all back to back, it's actually shaping up very nicely and is fairly cinematic.  So before we go onto the next one I guess it's time to deal with the aftermath of the last.

Now if you don't remember what happened last time then now's the opportunity to check out the new page and refresh yourself with the story so far.... of you go.... done it?

Good, to continue so finally Day One has drawn to a close and Andy has found his family. Together they have bugged out of their home, persued by a veritable horde of the infected citizenry or "D-Subs" as they are being referred to by the authorities.  Roaring off in their "borrowed" Ambulance, the family's departure is watched by a mysterious observer.  Earlier that day we saw Anna and Chris, aided by Gobbo escape from the Hospital (see the ATZ page for the links) with Chris acting a bit weirdly and hiding his medical notes from Anna. Prior to that we saw journalist April Nillson taking footage of the early police response to the brutality of the apocalypse and thinking about where she left her camera man!

Loads of plot points to follow up! so where to start?  I think what we need to do is meet the Wosa family and then we can go from there....

Obviously I have introduced you all to Andy "Gobbo" Wosa before, the ex-civil servant turned EMT/student paramedic.  A lover of all things horror and sci-fi, Gobbo has inadvertently been preparing for the "Zompoc" for 25 years. A student of martial arts as well as emergency medicine, he's got some serious skills to offer a party.  Following on from Day One, Gobbo has fulfilled all the requirements to increase a statistic in ATZ which he tests for and duly increases his "Shoot" skill to 4 - note I'm using Bryan's adapted ATZ skills card and subsequently split the almighty "Rep" characteristic.  He has also fulfilled the requirements to put his citizen status behind him (seen the feast, killed at least 3 zombies and injured an armed human)  and is now a survivor, meaning he no longer has to test for "citizen brown pants" every time a zed comes along.  His dance card now looks like this.

Who's the lucky gal then that has married an overweight geek with a zombie addiction....well that would be Lisa "The Vampire" Wosa.  No she's not called the vampire because she sucks the life from Andy (just pre-empting the comments...).  Lisa is a phlebotomist, a specialist in taking people's blood and a damn good one! need blood drawn from a 32 stone diabetic with a shut down vasculature - call "The Vampire", urgently require a blood test for a habitual IV drug user with only one half decent broken vein - call upon Mrs Wosa! She's the one they call when all others have tried and failed - oh and she's gorgeous and totally like most of the sultry vampires in those Hollywood classics....

Lisa is most definitely not a sci-fi geek (so she says!), but she does enjoy watching TWD with her hubby of 20 years as well as catching the new super hero films when they are released.  This has NOT prepared her for the awful onslaught of the day's events, however she has hunkered down with the kids ever since the explosion ripped through the Nightingale's property earlier that morning.  She had been desperately trying to get through to Gobbo's mobile phone when she saw her neighbour's attacking each other, like Gobbo she made the connection and started making "bug out" plans. 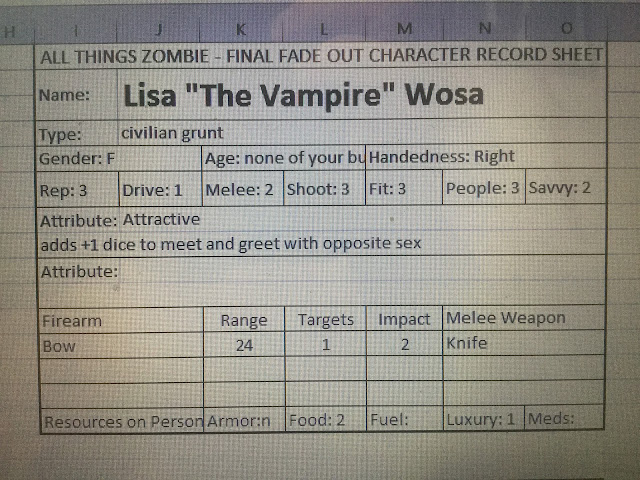 Looking at her card she is a Civilian still as she hasn't ventured outside (her and the kids have rolled to see if they "see the feast" when the zombies chowed down on Nudger's gang and they did witness said event).  Although the very cornerstone of Gobbo's life as an adult she is not the star of the show and must remain a "grunt" as Ed so nicely puts it in the ATZ rules.....pssst don't tell the missus!

She is Rep 3 having taking some self defence classes with Gobbo following his mugging, but never took it further than that - this means her melee suffers and is a poor 2.  That said she's an excellent shot (this is true!) having taken part in many archery lessons while on various trips - shoot becomes 3!  She hates driving and makes Andy do it all and this is reflected in her Drive skill of 1.  She is a fitness fanatic and goes to the gym regularly - fitness 3. She is also great with people, getting them to relax is key to her excellent success rate with the needle - people skill 3.  Lastly she has trouble using the remote control let alone any modern tech so - savvy skill 2.  As for her ability, yup you guessed it - attractive! (she's gorgeous after all....)

Next up is Gobbo's eldest child - Stephen.

Stephen is in his early twenties and has grown to be a very physically powerful man indeed.  Taller, stronger and quicker than his very proud father, Stephen is extremely capable in a fight.  He has studied martial arts since he was a child, firstly alongside Gobbo at Karate and then branching out into kickboxing and even western martial arts such as fencing.  This competence is only inhibited by his passive nature, Stephen is kind and caring - characteristics that are great in peace times but.... added to this is his poor eyesight, due to some issues his sight isn't great and this is reflected in his dance card below. 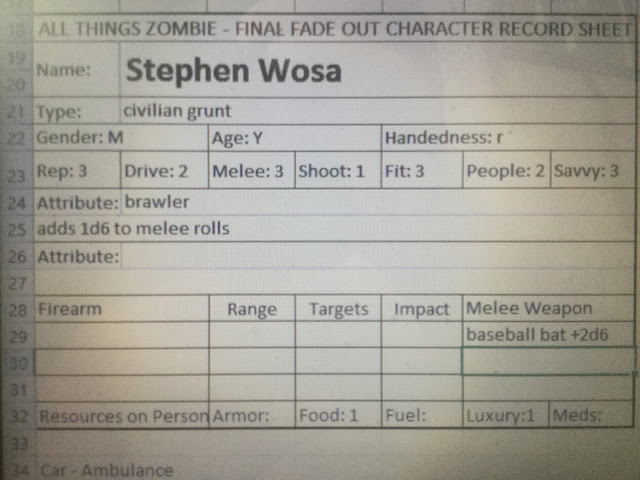 Yes he's a civvie and a grunt... I made him Rep 3 mostly because although he's got the physical tools to be a great fighter, he's a big softie and that's gonna make him hesitate - Melee skill had to be 3 though.  Drive skill and shoot are low due to his eyesight - 2 and 1 respectively.  Fitness 3 - all those sports! His people skill suffers as he's not a fan of the human race - 2.  As he knows his way around a keyboard and is the resident electrical expert he gets a good savvy skill - 3.  As for the attribute he gets "Brawler", now I know I said he's not a fighter, but this is due to his kind nature not his skill and there isn't a better alternative in the rulebook, if it makes you feel better call it - "Martial Artist" instead.

Onto the final member of the family, Gobbo's youngest and the apple of his eye - Astrid.

Astrid is a feisty, sassy, D&D playing, intelligent (read - know it all!!) twenty year old.  Always quick with a one liner or put down (depending on the situation) and quick of temper she is ready to defend her family to the hilt!  Like her brother she started Karate when she was a child but her natural laziness has led her down a different path and this is also reflected in her scores. That said like her mother she has a decent aim especially when she has practiced with her boyfriend's crossbow, a tidbit she has kept from her mother who would go spare if she heard about it! 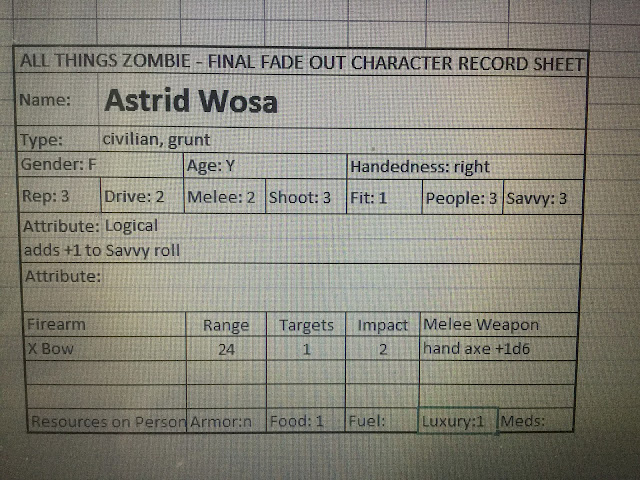 yup Rep 3 civvy grunt - of course! She has a drive of 2 having only just got a car.  Her melee is only 2 due to the lack of recent karate lessons, with her shoot 3 - reflecting her recent practice.  Like her daddy she's not a natural athlete and gets a rubbish - 1 fitness.  She is however very pleasant company and a sharp cookie too and benefits from a solid 3 to her people and savvy skills, the latter bolstered by her Logical ability.

So that's them then, finally you may remember that I did a post about a post apoc family I called "The Simpsons".  Well I wrote a couple of rules (well 5) that reflected the family dynamic within the zompoc, not all of which I could bring over to the Wosa family as the "kids" in this family are actually adults. So I've taken the three that reflect them better...

The family never need to test at the end of an encounter for keeping it together, they automatically pass.
Rule two - protect the Cubs!

The adults (parents) will never runaway while the children are still on the table, they will always stay and fight!

Rule five (now known as rule three) - a parents grief
If one (or more!) of the children die then each remaining adult must test immediately by rolling a d6. On 1-3 the parent becomes filled with rage and will 'kill' any zed on the table before ending the encounter, they will gain the rage attribute from here on out. On a 4-6 they will become overcome with grief and will become inactive until they roll a 1-3 in following activations and then they become enraged as above. Note when inactive they can do nothing at all including defend themselves!

Having introduced the Wosa family I'm going to leave them to nurse their (Gobbo's) wounds and spend some time adapting to the new Isle of Thanet.  Instead I'm going to tease out one of the sub plots and start to work on them, hopefully I'll be able to draw it all back together again at some point.