Time for the next installment of the ATZ - an English Adventure that I have created, you can find the earlier episodes here:

phew - looking at it I might need to create a page for all of these links!  Anyway to the next installment....

Andy "da Gobbo" Wosa has escaped the local hospital after rescuing his crew mate's partner who had been confined to an isolation suite.  Taking one of the abandoned ambulances from the loading bay he is heading home to find his family and get out of town. 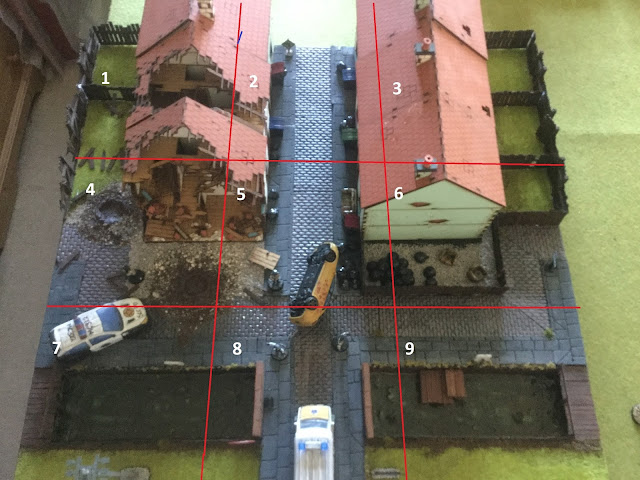 What Gobbo didn't know, due to damaged communications, was that an explosion has ripped through the house at the end of his road (in sector 4) destroying the house and damaging the house next door. As a result a car was flipped over blocking the crossroads. The emergency services, already over stretched can only send a police patrol to evacuate the road and secure the area. Having worked overnight and at the end of their endurance, the police are short tempered, stressed and on edge, especially in light of some odd radio chatter about citizens out of control and attacking anyone and everyone.  Gobbo desperate to get to his family, needs to get passed the road blockage and find out what has happened to them.  The noise of the explosion has attracted some unwanted attention...

Andy pulls up just shy of the crossroads and starts in sector 8, he needs to get to his house which is the mid-terrace in sector 3, where he will learn the fate of his family.  The police will challenge Gobbo although due to the fact he's in uniform and due to the excellent working relationship the police and ambulance service have he can add +1 to his Rep when taking his "meet and greet".  There will be three PEFs that will be pre-loaded to reflect the sketchy neighbourhood that Gobbo's pittance NHS salary affords him i.e low income families and elderly folk.

yes all of the PEFs rolled 6s for rep!!

There are 5 zombies on the board when Andy comes on.

The encounter will occur during the afternoon (using the time progression rules in the main rule-book) and is considered urban.  I'm just using one of my urban boards which is 24x24" so move is reduced by 2" and range is reduced by 2"

It is still DAY ONE