Before I get onto the topic of this post, I will be cutting the amount of posts I put out from next week.  This is due to the start of uni for my last year and it's already shaping up to be a hectic one, with lots of clinical placements and assessments amongst the plethora of essays and reports and all the while I'm still employed full time by the Trust so have to work a 37.5hr week (which with late sign offs inevitably rises passed the 40hr mark). As you can imagine this will impact on my blogging/gaming, so I will have to restrict my blogging output in order to get at least some time at the Wargames table! I'll try for twice a week which will be Monday and Thursday, but will more likely be just once a week - Monday.  I will still be reading and commenting on my fave blogs so I won't totally disappear and I've prepared a couple of posts already including an ATZ the board game batrep so da Gobbo will still be about.

Anyhoo a little while ago I put out a post celebrating Big Lee's 2 million views on his blog Big Lee's Miniature Adventures, yes that's right 2 million - jeez!  Anyway as well as a congratulatory post it also entered me into his prize draw and I got picked out! YES!!

The prize was a £25 e-voucher for Warbases, now I have looked at their website quite a few times over the last few years, particularly when the esteemed sir Michael Awdry produces one of his wonderful vignettes and adds those little hidden details, you know a little pheasant here, a rabbit or two there. I also admire the casualty markers my gaming buddy Chris "Naps" Thorne of the Nerd Herd uses in our Black Powder games.  So it was with great excitement that I went storming over to Warbases and started shopping, here is what I got. 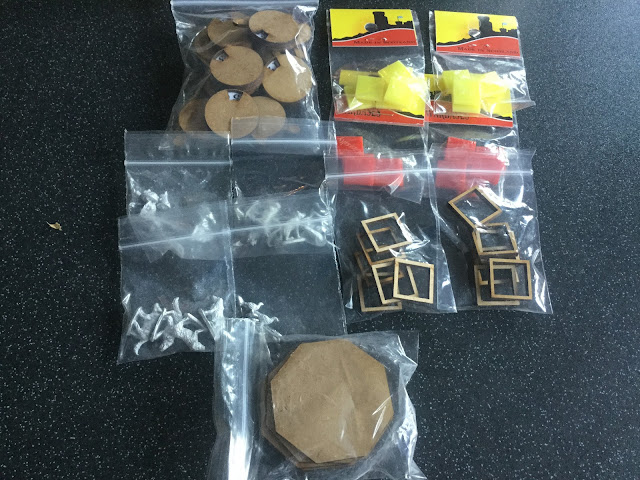 yummy loot!! So what's in the pile of goods you may ask, so here we go.  We have a pack of pheaants, a badger, a pack of foxes, a pack of rabbits, assorted dog models inc bulldog! 8 large polygon mdf bases and 12 casualty/pin markers with 12 16mm trays and 24 perspex inserts (12 pin and 12 casualty) all for just over £25 - total bargain!!

Thanks Lee you're a total legend!!!

But this post isn't finished let me show what I did in a fit of uncontrolled excitement in the 24 hours since receiving the bundle.

The casualty markers are 30mm, the smaller size, I could have got the 40mm which would have fitted the insert with more space around the edges, but I didn't want them to be too intrusive on my games.  Painting the tops of the markers and the 16mm trays with GW Mournfang Brown, I then glued the inserts to the top of the marker. Finally I used a ballast and static grass basing technique to blend with my other figs and board.  I gave the perspex markers a quick coat of very watered down black paint and wiped the excess off leaving the inscription coated in black and making the words easier to read, I prefer this technique to what some other gamers do which is to use a wax crayon as my way is quicker and just as effective. 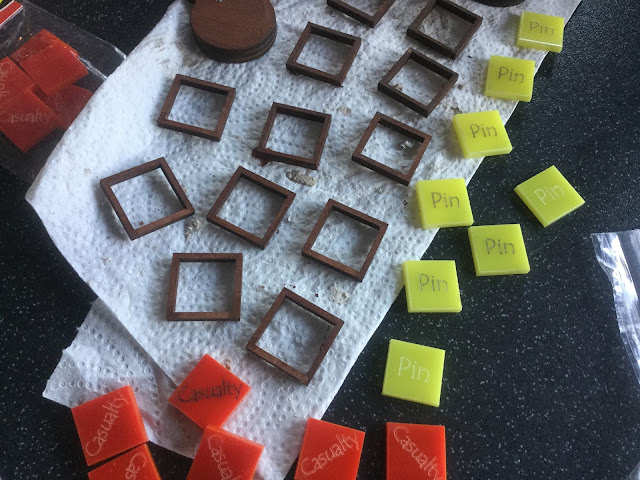 Now I can use the "Pin" inserts for my Bolt Action games and the "Casualty" markers for my Black Powder games, or I can just turn them over and use the blank sides as generic markers.  Alternatively I can use them to hold "order" dice for BA or an ordinary 16mm dice for PEFs in ATZ or any other game.  They are also useful turn counters!! 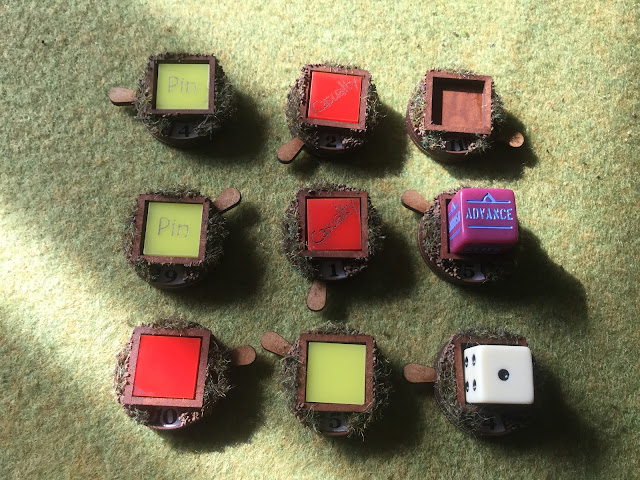 Next up was the polygon bases, I got these with a very specific reason, "Pass" tokens for Bushido. Some factions particularly the militaristic Prefecture of Ryu make extensive use of the Pass token. You can also gain them when you're faction is outnumbered in the game and they can be played instead of moving a miniature.  This can be very useful as activation control is vital in this game. You of course can use anything from a dice to a slip of paper to a matchstick, Damon and I have been using D10s (of which I have loads).  But me, being me wanted something bespoke so I sprayed the tokens black using a very smelly car primer!  I then gave them another coat with Vallejo black as the spray isn't very absorbing and makes paint run off....

Following that I used a small 15mm base to make a white circle in the middle of one side and then hand painted a Yin Yang symbol.  This was then given a sprayed seal to protect it. 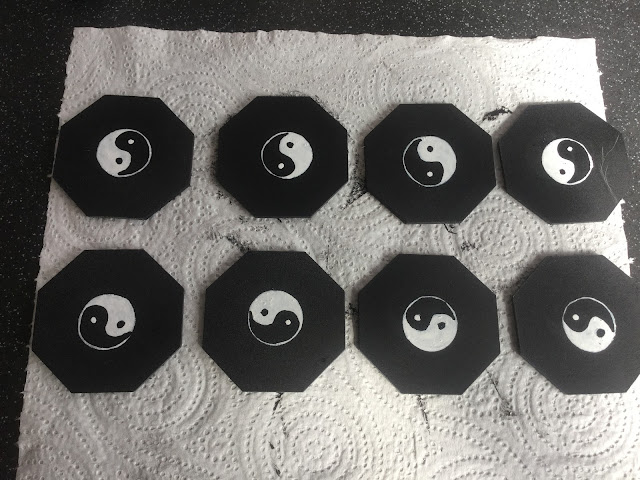 On the other side I looked up the word "Pass" in Japanese Kanji and painted it on.  It was only after I finished all of them did I think that I might have used Pass in the wrong context, but looking up similar words it seems I'm not far off, phew! Again I sprayed a sealant on to protect it from the hard use it's bound to have.  As you can see with the paint pot in the background these tokens are fairly big, this was very deliberate as I wanted a very visual token as they don't go on the table top and sit at the side of the game and need to be seen by your opponent easily. 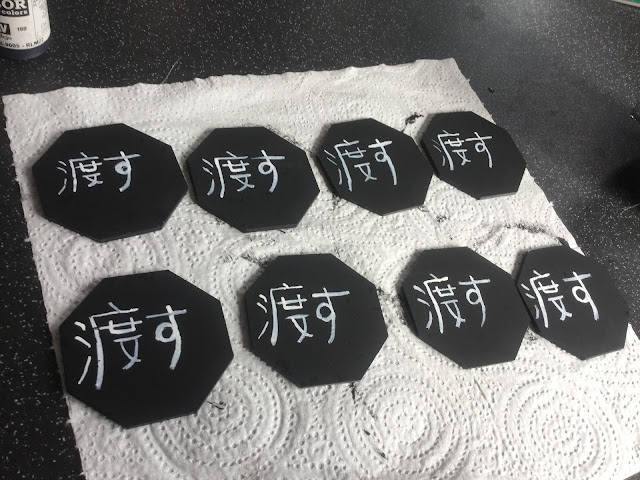 And there we have it, my Warbases prize used almost immediately.  I already have plans to use a lot of the animals as I need to rebase my woods and trees.

My thanks to Big Lee for the prize and again I tip my hat to the unimaginable number of 2 million hits, check out his blog here, I promise you, you will not be sorry as he covers a massive array of topics!