ATZ the Board Game - batrep


The story so far, it is day 26 post apocalypse and Tonya and Beck arrive in a nameless town looking for weapons to bolster their meagre supply. Both are armed with a 9mm pistol, Beck carries extra ammo and Tonya carries a first aid kit. So here we go..... 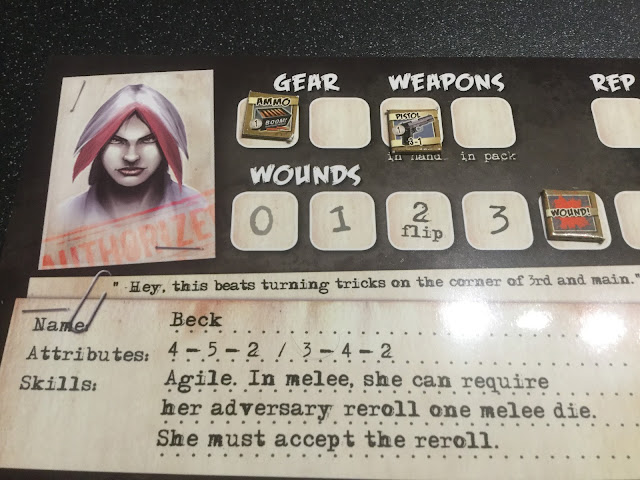 Tonya glided gracefully forward, moving almost silently her pistol held in a two handed grip like on a cheesy cop show. By comparison Beck, despite being deceptively quick felt like a lumbering buffalo, it seemed her two left feet would find every imperfection in the road, crunching down on empty coke cans and broken glass making a riot of sound that seemed to carry to every corner of the main strip, her pistol dangling by her side as she tried desperately not to fall over her own awkward limbs - or at least so it seemed to her compared to the achingly beautiful, almost ethereal Tonya. 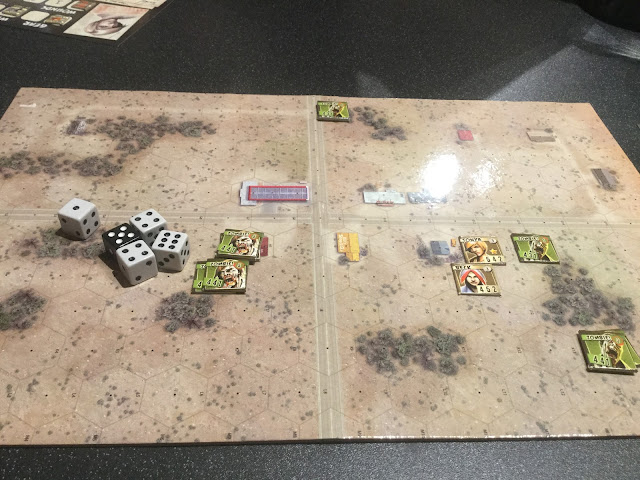 “Have you seen any of those dead’uns Ton?” Beck asked in a loud stage whisper that echoed all around, causing Tonya to wince in anticipation of an avalanche of undead responding to Beck’s booming voice. As if on cue, a tortured groan came from across the asphalt car park that they had been traversing and a single zombie stumbled out from behind a dumpster.

“Ahh it's just the one Ton, we can handle that easy, yeah?” Tonya rolled her eyes at the flat out challenge to the fates laid down by her friend, flicking the safety off of her Glock. Almost immediately another groan and another zombie appeared behind the first, followed by another and another.  Similar moans and shuffling from behind and to the sides indicated  that they were surrounded by the infected.

“You just had to say it didn't ya Beck!” Tonya huffed as she sprinted toward the closest building away from the zombies.  “Let's just grab some guns and get the f**k out of here!” Beck blinked twice, her BFF was stunningly gorgeous, angelic even, but sheesh what a potty mouth…. Running to catch her up she reached the doorway just Beck heard the sharp crack of Tonya’s firearm. Dashing through the door she quickly took in the scene. The house was in an old western style and looked like an old ranch house with a big open plan ground floor, by the fireplace, which was big enough to step into was the remains of a zombie with a neat hole in its forehead and a less neat but far bigger hole in the back of its skull where Tonya’s 9mm bullet had exited. In the middle of the room Beck’s friend was struggling to keep another 3 of his buddies from ripping her to pieces and barely succeeding as fresh blood poured down her left arm from a laceration.  [Stefan had moved into the nearest house drawing a zombie card and getting 4, he managed to gun one down before engaging in melee, he couldn't kill a zed and ended up being wounded] Raising her own pistol with shaking hands, Beck discharged a shot before she could aim properly and the round slammed into the thigh of the closest zombie, tearing a huge chunk of muscle away from the bone but doing nothing more than turn its attention to Beck. Gulping visible, she backed away tripping on the rug and banging her head on the doorframe. [I had moved into the house as well, missed with my own shot and also got wounded in melee – bad start]

With a roar Tonya heaved at the zombies struggling to bite down on her succulent flesh, creating a tiny gap. Stepping back she gained yet more space and used it to clear the couch in a quick dive, rolling passed Beck and running for the door. Reaching out a hand she grabbed the startled Beck and dragged her away from the approaching zombies and out into the daylight. 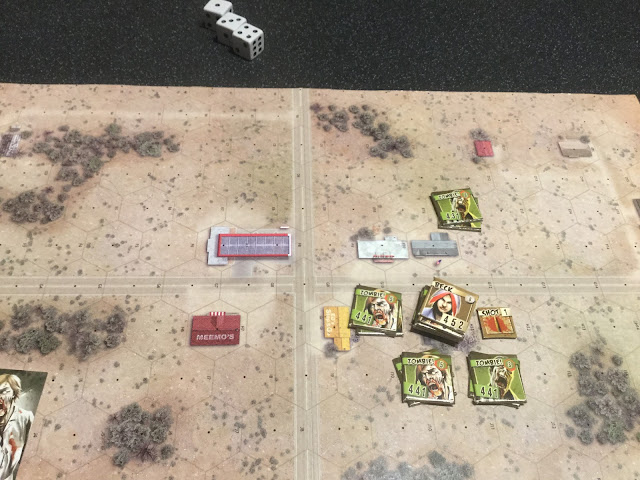 Outside Beck could see that the zombies that had been chasing them were closing in. Lifting her pistol, she pulled the trigger twice in quick succession, dropping the closest zed with two in the head. A loud report behind her followed by the thud of a body hitting the floor told her that Tonya had taken another dead head out.  Tonya strode quickly forward, picking up a brick from a pile of rubble and smashed it into the leering face of a zombie closing in a little too fast. The rest of the zeds stalled in their advance and seemed to hang back at this show of aggression giving the girls a chance to slip away from the press of bodies.  [the zeds didn't move this turn and Stefan and I both dropped a zombie with pistol fire with Stefan killing another in melee. The noise of the shooting generated another zed] Beck spotted another zombie crawling out from behind a dumpster in front of the running women and squeezed off another two rounds throwing it backwards and causing it to fall into the dumpster with its feet up in the air. “Taking out the trash!” Beck cried out, causing Tonya to wince at the terrible joke.

Beck ran on, shooting almost wildly but still managing to fell another zed. Tonya peeled off to the left and gunned down a female zomb lurking on the porch of a nearby house before racing after the stocky figure of her friend. The strange lethargy that surrounded the zombies dissipated and they started to move towards the young women, three of them heading towards Tonya. Whipping around quickly, the lithe ex-dancer lazily extended her arm and the Glock barked twice dropping one before being herded towards a large metal building in the middle of town. Beck managed to squeeze another round from her 9mm before the hammer clicked down on empty but not before her shot took another zombie off its feet. [despite getting several hits with their pistols both Stefan and I characters somehow generated a zombie for each shot and we were slowly getting herded into the corner.] 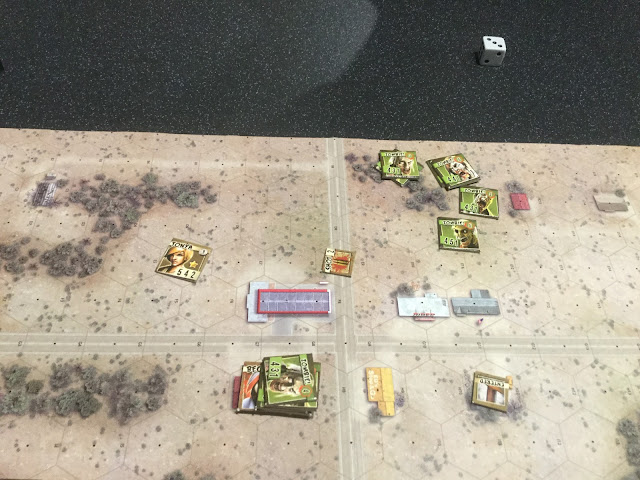 Beck ran into Meemo’s bar thinking that she would be able to grab the obligatory sawn off that was bound to be stashed under the counter.  Inside the gloomy interior, she blinked to clear the dazzling sunlight out of her eyes, making out four shadowy figures groaning and moaning in the now very familiar sounds of the undead. Pulling the trigger of her nine, she had forgotten that it was unloaded and with a mounting horror she realised the level of trouble she was in as a dry clicking was all that the pistol managed to produce. Stumbling backwards she was attacked by the four zombies all rushing towards her, mouths wide open ready to bite. The first was on her almost immediately and she ducked under the outstretched arms of the foul creature backing toward the door of the bar,  fumbling for a fresh clip for her firearm. The second zed scratched a long wound down her forearm with a ragged nail, drawing a streak of hot, fresh blood out and onto the wooden floor with a audible splatter. [This meant that Beck was wounded and that she now had to flip her card over to the wounded side,  meaning her stats change for the worse] Sharp cracks from outside followed by the muffled thump of a large object hitting the floor told Beck her friend had picked off more of the filthy creatures. 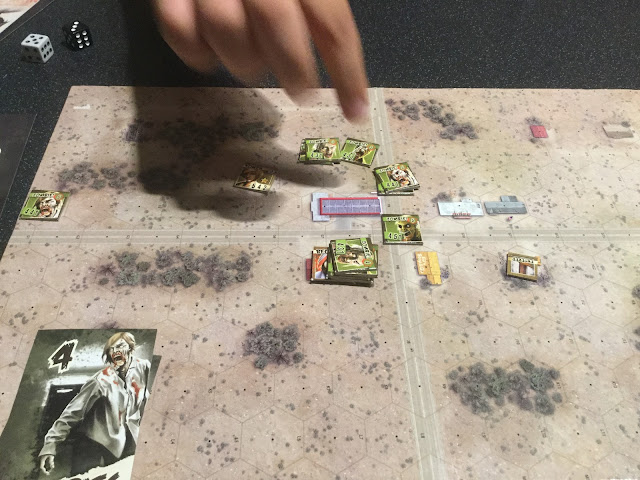 The scratch down her arm was burning now and her hand was shaking as she tried to lift her pistol. Snatching at the trigger, she tried to gun down the zed who had wounded her,  almost crying as the rounds slammed into the floor by the feet of the dead ‘un.  “Fuck off!” She screamed at the monster with all her frustration and anger that had built up over the last few weeks.  The sheer volume of the shout stopped  the zombie in its tracks and it stood a few feet away blinking at her stupidly [the zeds didn't activate this turn…]. With tears of pain pouring down her cheeks, she spun on her heel and dove for the door, a mild regret of not having searched the building nagging in the back of brain, while the rest, the more survival orientated part was urging her to get out, make speed, gain distance….


to be continued...
hope you enjoy
dGG