Everybody was Kung Fu fighting....

guess what song you're gonna have stuck in your head for the rest of the day...... bwahahaha


There are loads of reasons to love the game Bushido by GCT Studios, regular readers of my blog will have seen me practically salivating over the gorgeous miniatures, enthusing over the “fluff” surrounding the setting of the game – the fictional Jwar Isles and the unique blend of oriental fantasy that permeates into all levels of Bushido.

These are all great things and they really make this game come alive for me but let's face it there are other games that have terrific models and yet others that have volumes of background “fluff” that bring the world alive for the tabletop wargaming – Malifaux and Warhammer to name but two. So what is it that draws me to the game time and time again (and probably bores the socks off of most of you good folks). Is it the vast number of scenarios that reward good tactics rather than just who can figure out the most ‘killy’ list? Is it the balance that runs through the game and the factions? that means you can buy the models you love the look/background of and still find a use for them on the tabletop. After all we all know of models that look amazing but rarely get a run out on the boards due to points costs or poor synergy with the rest of the warband don't we? These are all good reasons and on their own and add up to make a great game, but for me the main reason for loving this game is the combat system.

Aye I know, I've literally just said that the game rewards good tactics rather than uber warrior lists but bear with me as I reason this one out for you. In most games the tactic is purely in the manoeuvring of the opposing armies and making sure your shock troops wash away his weaker missile armed troops or getting your God-like hero to wade into the ranks of poorly equipped Goblins and rag on them for a bit until they are destroyed or run away. But once you're in melee then it's just chuck a few dice, consult a table, remove some models.  The odds are already worked out, there generally is very little interaction or room to change those odds, to alter the outcome or bluff your opponent. This is fine for mass battles and hundreds of figures but for smaller games this isn't enough for me and this is where Bushido comes into its own, this is where the game has grabbed my attention and ensured that I come back for more time and again.

“So what's so special about the combat system?” I hear you say.

Well  built into the mechanic in several ways is the tactical side of the game again - bluff and uncertainty, the game encourages you to think whether you want to gamble or fight conservatively. What do you need your fighter to do? Is (s)he gonna beat the tar out of your opponent or do they just need to hold them up for an activation or two, while other more important things are going on? Are they wearing them down slowly or going for a smackdown? Do they need to push your opponent out of a certain area of control or knock them to the floor? Yes certain models are better at some of these things or one of these things, some can even do all of these things but it is this level of interaction that brings me back to the Bushido game. These nuances that give the player more control, gives detail but still flows easily and doesn't distract the player from imagining the swirl of battle and the spectacle of eastern martial arts.
Ok without printing the entire game verbatim (you can download them free if you want to) the sequence for a Bushido melee is roughly this…..

This may seem like a lot of steps and in fact I’ve simplified them a little, there are success levels and wounds to score, traits like dodge, feint, parry, toughness and armour all affect these to a certain degree or other, BUT the whole thing flows really well after a few goes, in fact after a few goes it takes no time at all and the hardest part is remembering to use your traits correctly.  Remember also that you only have half a dozen figures per side so it's not overly draining in anyway.
Here are some examples of how it works….. Jin, thanks to the long reach of her Yari (spear) has First Strike trait and automatically becomes the attacker with Kenko, despite initiating melee becoming the defender. He therefore has to declare Ki feats or boosts first. Determined to beat on Jin he boosts his already good Dice pool of 4 to 5 using his Ki.  Jin who has no Ki available has to rely on her modest Dice pool of 3. 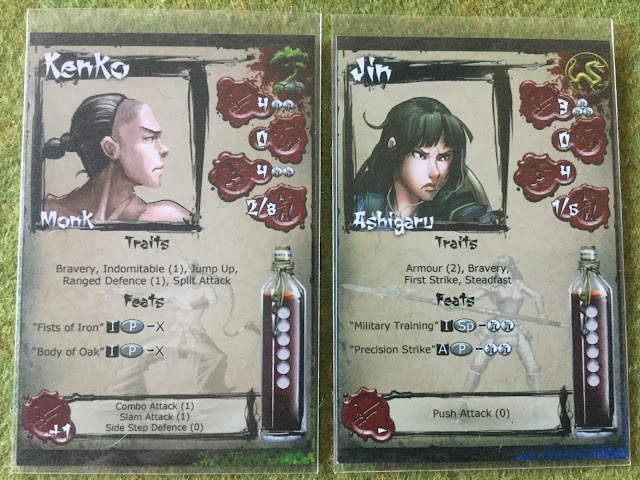 Kenko next chooses (in secret) any special attacks or defences and chooses Combo Attack, which will allow him to strike Jin multiple times if he has a high enough success level. However for Kenko Combo Attack costs him a dice reducing his available pool back to 4 (from 5 because of his Ki boost). Jin chooses (in secret) Push Attack which will allow her to keep Kenko at arms length using her Yari to its best advantage. Push Attack for Jin is rated (0) and doesn't reduce her available dice, which stays at 3.

Now comes the tricky part for the players! Does Jin go all out attack (roll all three of her available dice in attack) and hope she scores high enough to drive Kenko away before he can do damage or does she hedge her bets and put a couple of dice into attack and a single dice in defence just in case he foils her Push Attack. Kenko needs to decide how many of his 4 dice he gives over to attack and get that Combo Attack and how many in defence to foil any attacks Jin can muster – arrgh choices, choices!!

Rolling dice together –
Kenko gets a 5,3, 2 in attack which gives him a total of 7 (the highest dice score plus 1 for every dice roll that wasn't a 1 (which is a failure)) and a 5 in defence
Jin gets a 4,2,1 in attack for a total of 5 and a 0 in defence (she didn't allocate defence dice so gets a zero score). 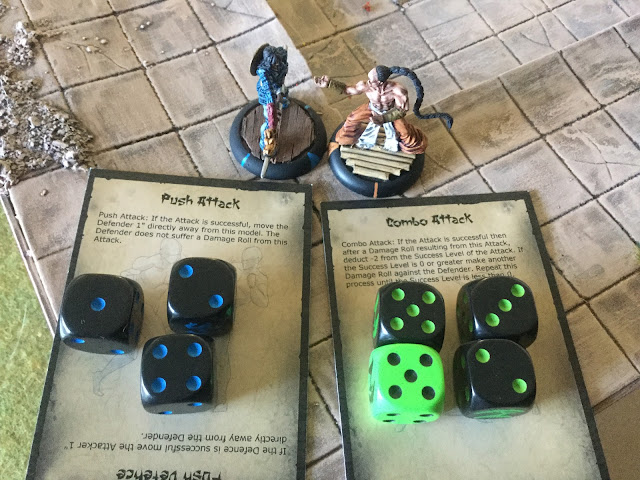 Jin is the attacker due to her First Strike so her dice are resolved first. Her attack score was 5 vs Kenko’s defence of 5 therefore she is successful in her attack (albeit with a success level of 0, which counts as successful only negative numbers aren't a success). She reveals that she used Push Attack and Kenko is pushed back 1” from melee and therefore is unable to resolve his own attack, which would have been at success level 7 which would have been very bad for Jin indeed. 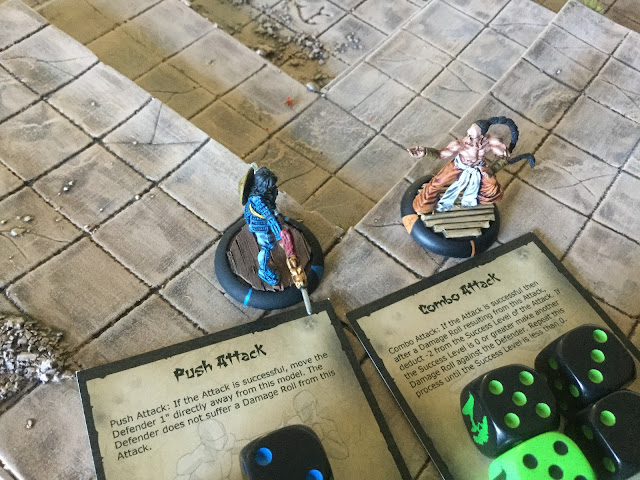 As before Kenko rolls 5,3,2 in attack for total 7 and a 5 in defence
However  Jin rolls a 4,1 (not getting the 2 like the previous example as she only rolled two dice) for a total attack of 4 (1 always being a failure), she also rolls a 2 in defence. 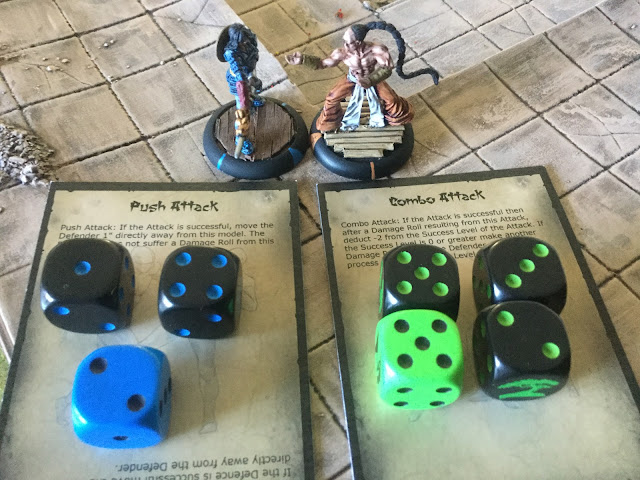 Jin is the attacker thanks to First Strike, her 4  cannot beat Kenko’s 5 in defence (4-5=-1) so she is unsuccessful in her attack and her Push Attack doesn't come into effect.  It’s now time to resolve Kenko’s attack, he scored a total of 7 and Jin rolled a miserable 2 in defence leaving a success level of 5 (7-2=5) and Jin is facing a total battering as Kenko reveals his Combo Attack with a nasty grin……

Same situation, same desired goals by each player, but by changing the dice from attack to defence the melee goes a completely different way. 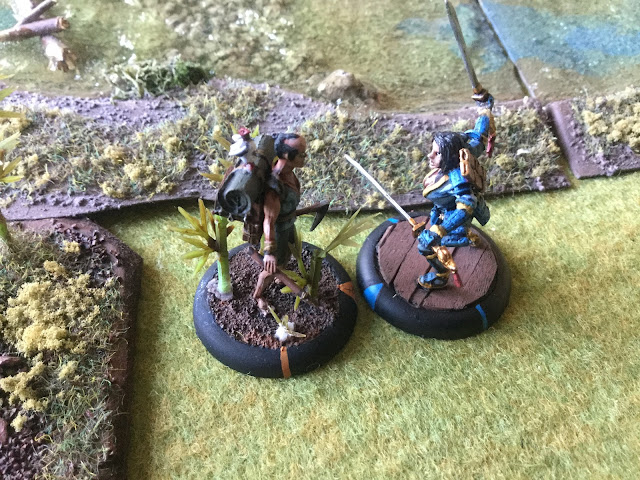 Aiko's Guardian comes steaming in from across the meadow in a full charge. 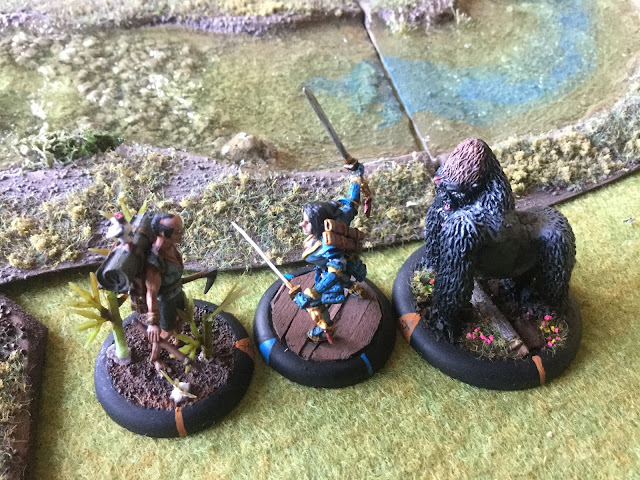 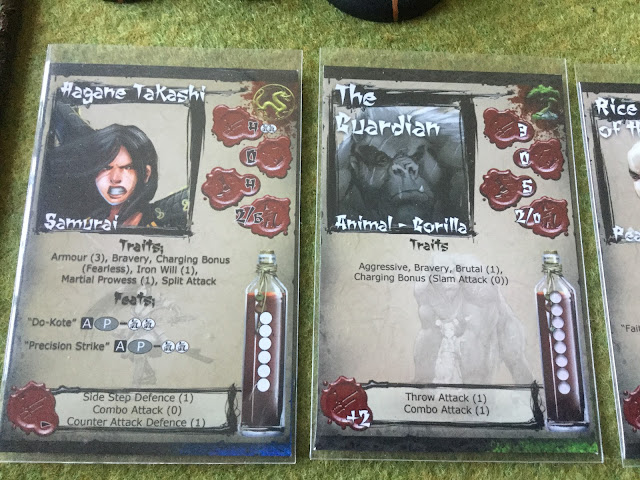 Hagane's in big, BIG trouble, she has a MS 4 reduced to 3 because of outnumbering, then reduced by another die again because she is surprised (attack from outside of her Line of Sight) leaving her with 2. As the defender she needs to declare Ki boosts or feats.  She has 4 Ki remaining so uses all of it to boost her available dice by two back up to 4.  The gorilla is unable to boost its MS so will have 3.

The next big decision for the Temple player is does he go for massive damage (charging adds +2 to damage plus the +2 that the Gorilla already causes) or does he use his charging bonus - Slam Attack to prone Hagane opening her up for even more pain in the next activation.  He chooses to attempt to Slam Hagane, this will give him an advantage later on.  He decides to go all out attack in order to make sure he gets the result he needs.  Hagane for her part needs to stop the Slam from succeeding and decides to go all out defence and use Side Step Defence (1) to get away from what is now a very disadvantaged fight and losing a die in the process.

Rolling together they get the following :- 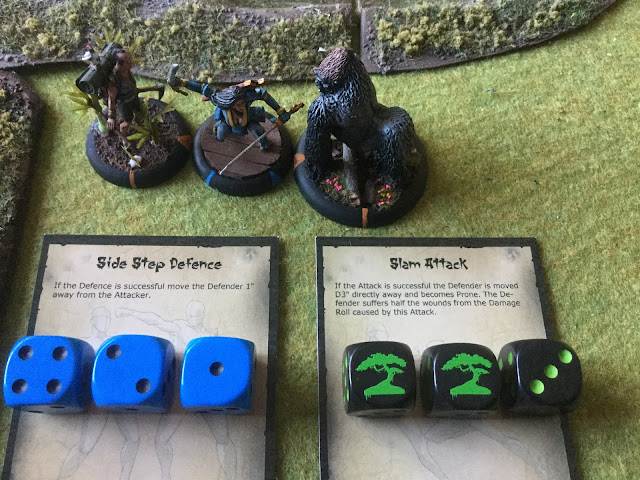 The Guardian pulls of a Success Level 5 attack (10-5=5) bet the Temple wishes he had just gone for a straight up attack as it probably would have killed her.  As it is he scores half damage and slams Hagane d3 inches away and causes her to become prone.  Unfortunately the Temple player didn't angle his attack properly and the Slam impacts into the Rice Farmer cowering behind and he goes down in a heap as well.....oops! 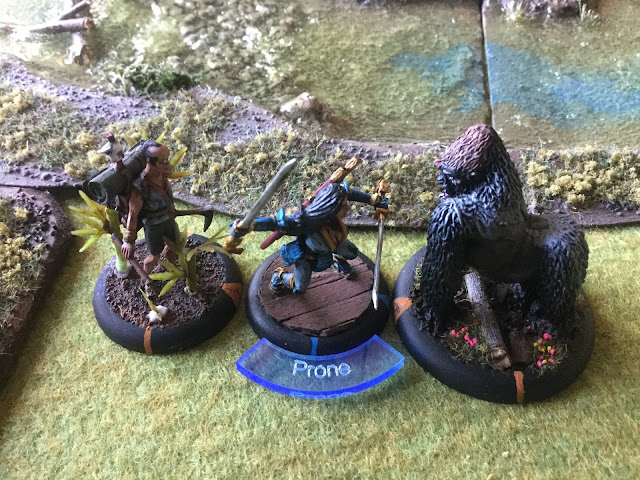 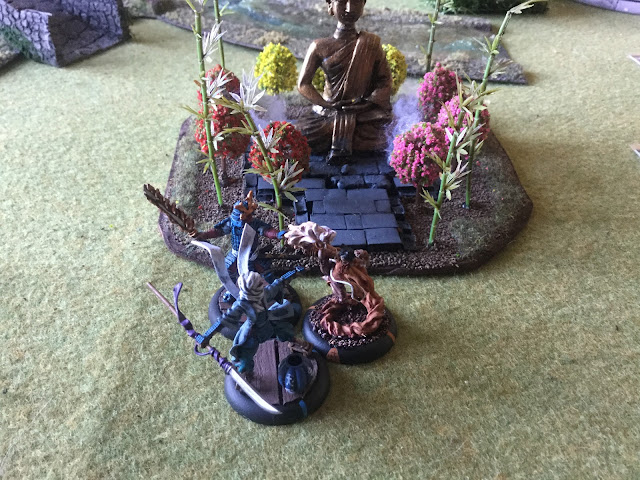 Hotaru of Ro Kan is set upon by Hiro Takashi while she is already in melee with Tenchi both of the Prefecture of Ryu.  Hotaru has already fought in one melee with the highly skilled warrior priest Tenchi and now in combat with a hugely competent samurai as well things look bleak for the Ro Kan player. 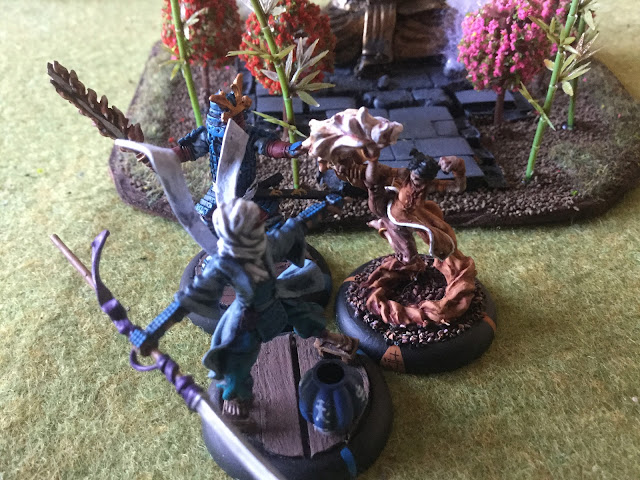 Hiro is the attacker with Hotaru being the defender. Hotaru has a MS 3 and as the defender has to declare any Ki feats or boosts first. She decides to plough her remaining Ki into a boost to raise it to 4, however she is outnumbered because of Tenchi and has to remove a dice because of that, back down to 3 then.   Hiro is confident in his ability to destroy the young monk and boosts his MS to 5 with his Ki. Neither side declares a Ki feat. 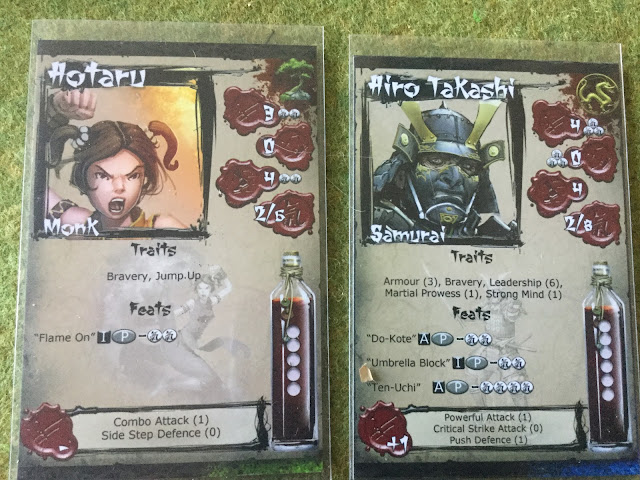 Hotaru, desperate to get out of this melee with two armoured warriors chooses her special attack/defence with care and goes with Side Step Defence (0) which doesn't remove any precious dice from her pool, keeping her with 3.  Hiro chooses to go for glory and declares Powerful Attack (1) which does remove a dice from his pool reducing him to 4. 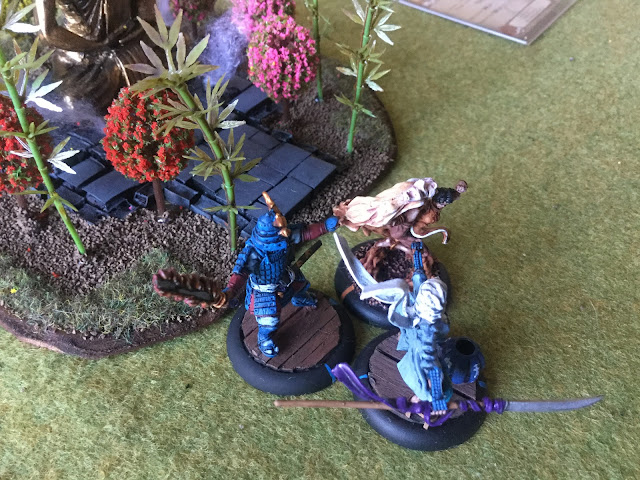 In secret they split their dice up with Hiro allocating 3 to attack and 1 to defence, just in case the fiery monk sticks a boot in…. Hotaru allocates all of her dice into defence knowing if she is successful she can move 1” away from Hiro and out of the potentially nasty combat.

Rolling the dice together they get……. Ah well you get the idea…..hahaha 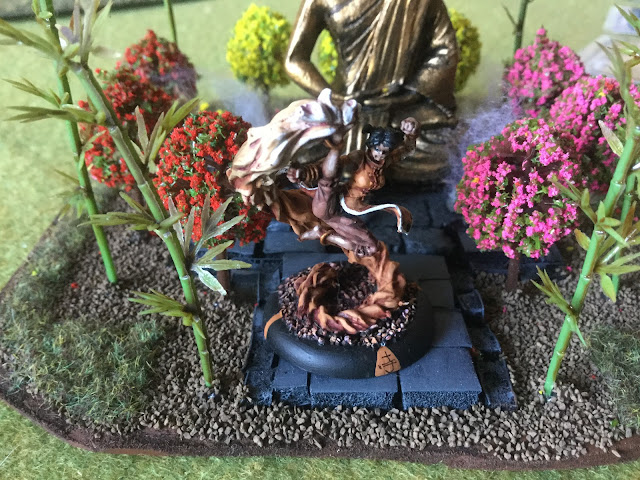 The point I'm trying to make (and probably just causing confusion) is that these examples are not foregone conclusions and the choices you make whether it be allocation of dice to attack or defence, which SA or SD you want to use, if any.  If for example you pitted a Goblin Warlord armed to the teeth and armoured to the best the greenskin smiths can manufacture put him into combat with the most lowly of Dragons then the outcome is a foregone conclusion - mathematically but the other day I put a Racoon shaped Yokai up against a Dragon and they fought for the length of the game! 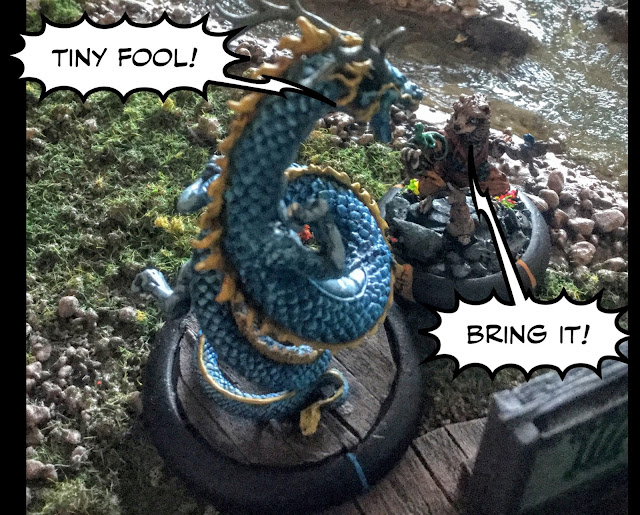 Oh and did I mention that I love the miniatures? 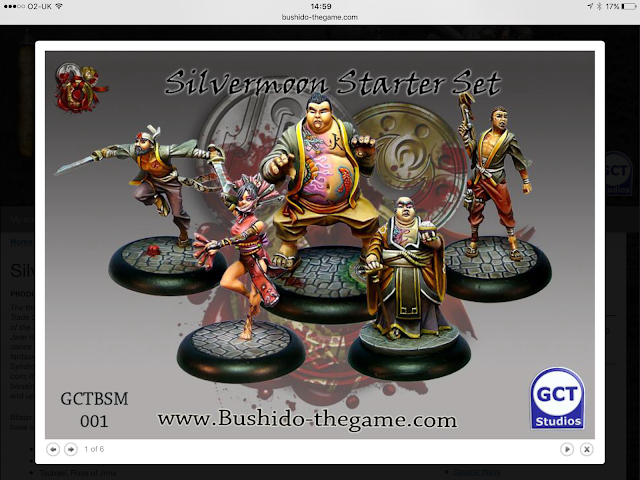