And I would have got away with it, if it wasn't for that pesky apocalypse!


Still working my way through the Xmas and birthday haul. This posts band of plucky survivors are an inquisitive bunch, always poking their noses where they are not wanted! Want to know how the apocalypse started? Just ask the post apocalypse gang - NOT Mystery Inc 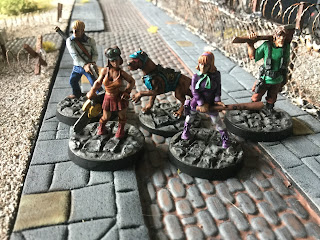 This series of minis sculpted by the talented hands of  Kevin White of Hasslefree Miniatures fame, are just about my favourite sculpts he has done (just trumps Violet/Jade). Based on the Scooby-Doo gang of plucky teens, the miniatures have been tooled up to face the rigours of the zombie contagion. Is there a supernatural cause or is it bio-engineering gone haywire? These guys will investigate, while blowing away the dead-heads!! 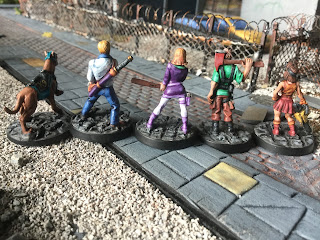 This won't be a miniature review, I leave that to the likes of the master himself Vampifan. His review will tell you all about the sculpts themselves. I've attached a link here (hope you don't mind Bryan)

This will just be a bit about how I painted them and I just wanted to show them off!  We'll start with my least favourite and work my way forward, to be honest though I love all of them! I tried to stay true to the original cartoon colours, but the tones varied in all the source material so I did my best interpretation. 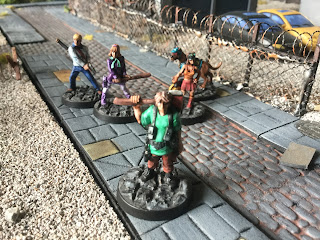 Firstly we have (not) Shaggy, owner/compatriot of the Great Dane himself. I built his base up from the supplied slotter with polyfilla.  waiting for about ten minutes for it to semi dry, I used a toothpick to detail the cobbles, this is something I'm trying out for my newly acquired miniatures and I'm quite enjoying the results. For this group of survivors I've used a white undercoat, normally I use a black primer, but I've liked the vibrant colours that I used as I think it tips a nod to the cartoon history of the Scooby gang.  For Shaggy I used citadel Loren Forest green for his shirt, washed with Biel-tan green ink, highlighted back. The combat trousers were a mix of Vallejo Saddle Brown and citadel Mechrite Red, washed with Corroburg Crimson and highlighted with the original mix, and again with a little white added. The only flesh colour I use is Tallarn Flesh and washed with Reikland Flesh and highlighted back.  I decided to leave his combat harness matt black and paint the axe up as a fire axe, the boots were black despite some source material showing brown shoes and others as red and yet others as black....grr frustrating much! 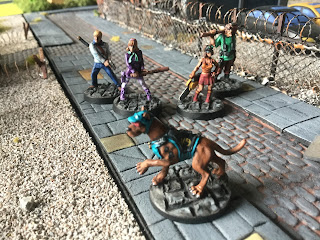 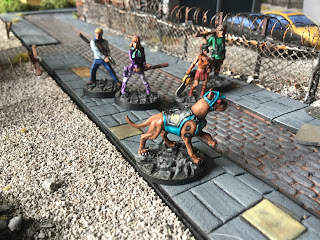 Secondly we have the main man...err dog himself! (not) Scooby-Doo.  Although i like the combat harness for Scoob, i'm not blown away by the head gear.  I used a mix of Vallejo Orange Brown/Saddle Brown for his fur and washed it with citadel Agrax Earthshade, highlighting it back with the original mix. His combat harness edging and headgear is citadel Hawk turquoise as a nod to the colour of his dog collar in the cartoon.  I picked out his claws in White Scar in order to emphasize his natural weaponery and painted the goggles red to depict IR. Finally trying to get two pictures to agree on the positioning of the black spots in his fur was impossible so I added some to his shoulders, which seem to be most consistent! 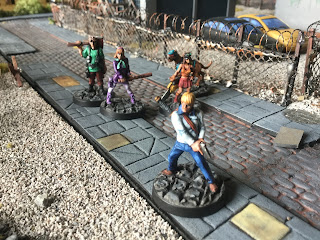 Thirdly we have (not) Fred, the well meaning but slightly dim "jock". I love the pose that Kev has sculpted for Fred, that grip on the pistol is awesome.  Fred was fairly simple to paint up with a pure white shirt with mordian blue collar and pants, all washed with Drakenhoff Nightshade and highlighted back with the original colours.  Pure white like pure black is a bugger to get right but i find the blue wash helps to make the white crisp if used sparingly. Unlike the cartoon, post apoc Fred doesn't have an orange cravat, so i painted the katana strap and shoulder bag using Vallejo Orange Brown and washing it with Carroburg Crimson.  The katana sheath was painted Xeres Purple and washed with Leviathan Purple. 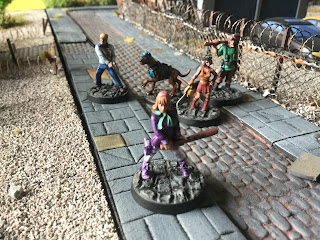 next up is (not) Daphne, she was the first of these minis I painted as I love the sculpt. Her colours were made up of Xeres Purple and Loren Forest Green, with the correct washes.  the next part may be contentious because in some of the pics of her she is bare legged and in others she has tights! Argh! this was most annoying, in the end i plumped for white tights washed in the Xeres purple with a little white in it and heavily watered down.  I hope that is alright with the purists...... 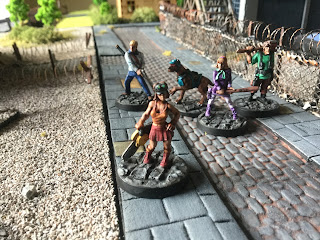 Last and by absolutely no means least is the awesome sculpt of Velma.  Again read Vampifan's review of the Velma/Louise because it is spot-on. Like Bryan I think she has sexed up for the apocalypse! I'm not a massive fan of chainsaws in the zombie universe and so far have not employed them, although i have several survivors armed with them (they are just so iconic) this may change now miss Dinkley has come to grace us with her company here in da Grotto.  Velma was painted using Vallejo Orange Brown for her string T and socks with Mechrite Red for her skirt and shoes all washed in Carroburg Crimson. 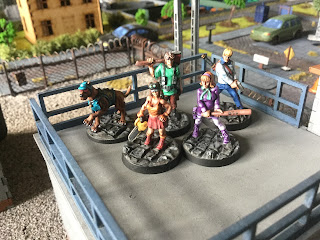 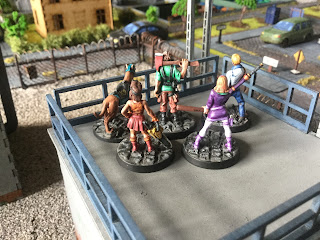