A second review in as many posts!


Born in the early 70's, child of the 80's I love films from that era.  My faves were the ones set in dystopian futures such as Blade Runner and Brazil.  part of my Xmas/birthday swag was a pair of miniatures bought by my daughter (my awesome nerd in training!) she got me these little beauts from Studio Miniatures from their survivors range.....

The first is the one they call Hawk, who is most definitely NOT Snake Plissken - the special forces soldier played by Kurt Russel in the 1981 classic cult film "Escape from New York"

I painted him up similarly to the way the have on the website (although not as well!) although I'm pleased with the way he's come out in the main, the urban camo trousers are not as I would have hoped and are a little disappointing. That said, it's neat and tidy and presentable so I've not repainted them. He was painted in mainly GW paints, black and grey with highlights of both. I've painted his hair with Vallejo yellow and washed in Agrax Earthshade for a dirty blonde look. The machine gun that looked very futuristic in 1981 is a matte black finish as it is in the film (most of my firearm paint colours are chain mail dark metallics).

The second is listed as Mel, definitely, definitely NOT "Mad" Max Rockatansky - the MFP's top pursuit man. This model is NOT from the second film in the Mad Max saga, again from 1981 "Mad Max, the Road Warrior" which is one of my favourite films of all time and starred Mel Gibson in the lead role. Incidentally the Ford Falcon used by the police and the V8 interceptor version was designed in part by my uncle (fun fact!) 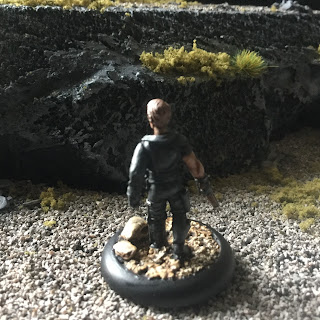 Mel was fairly simple to paint up, although I normally tend to over highlight black, this actually turned out OK and I was fairly happy with it overall. Just recently I've added eyes to my survivors, not something I'm in the habit of doing, but for some reason have decided to do to these figures and Violet before them.