For weeks I have preparing for a WFB campaign with my mate Rich, my first campaign in years and my first with Rich (himself a novice to WFB) so it had to be good.  Hours flew by as I at first pondered the shape of the games and the various conflicts and indeed gaming systems that could be used within the campaign.  Firstly I needed a map, that always cleans out the ol' cobwebs and gets the creative juices flowing.....

right then... so a map.... I needed inspiration, glancing round the room I spotted my daughter's favourite emblem and Skull Island was created.  I will attempt to take a pic of the campaign map but as it is drawn onto a whiteboard at the mo, the quality might not be any good.  We decided that we were going to pit the might of my High Elves versus the puny humans of Rich's Empire troops.  With the adversaries decided it remained to pick names for our characters and devise a history for each to add more flavour to the games and invest more into the history of why we were fighting over a piece of rock off of the Lustrian coastline. 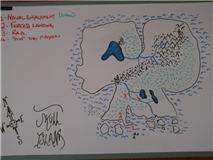 As this was my campaign I decided to think through a basic shape but allow the game to grow more organically with a battle only directly deciding the future of the next one and so on.  With that in mind yesterday we fought our first battle as a naval engagement using the ManO'War rules, a cracking game from GW sadly out of print now and not even available as a specialist game - boo! hiss!

I have attached the background and a battle report on the BR page. 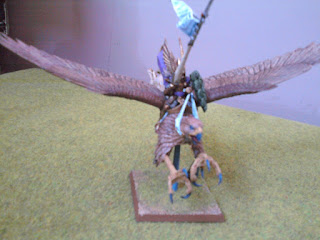