Private Conti inched the small mirrored device around the corner of the housing tenement, that he and Dewbury were hunkered down in. He winced as the bullets struck the paramedic and threw the portly male to the ground with a thud.  The deserter watched in fascination as the shorter female snarled a cry of rage and lifted a wicked looking crossbow. Conti held his breath as she let fly a bolt at the sinister Mr Smith.  The former soldier had held the “Men in Black” in awe having seen them in action. He had thought them as beyond human, so he was horrified as the bolt flew true and struck the agent high in the shoulder and dropped him to the tarmac. 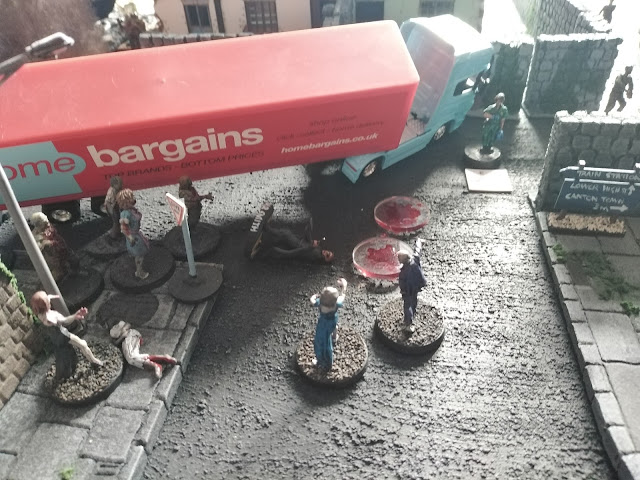 The low moaning of the D-Subs grew louder as the MiB went down. As one they surged forward in an effort to get to the warm flesh of the agent, their teeth bared in anticipation. Conti withdrew the device and hitched his assault rifle up, nudging the nervous man that hovered behind him, he indicated that the deserters should get while the going was good. Without a backward glance, the former soldiers ghosted away from the crash site.

April heard the sickly thud as the heavy rounds struck Gobbo, a fine spray of blood flew from the medic's head as the bullets tore a crease down the side of his face. She stood frozen to the spot as Gobbo’s daughter – Astrid raised her bow to return fire, dropping the agent in the black coat.  A door slamming open behind her, had her spinning around with her ASP held loosely in her hand. A zed stumbled over the threshold, falling forward and allowing April the chance to crash the heavy extendible baton into the back of it’s head.

Astrid felt her father’s blood splatter the side of her face as he was spun around, before crashing to the floor.  The young woman pushed down a surge of fear for the stricken medic and sighted down her crossbow, shooting the bad guy who had fired on her dad so callously. She grinned fiercely as the bolt lodged in the sinister agent’s shoulder and taking him out of the action.  That grin turned into a shout of both surprise and glee, as she spotted her dad’s crewmate clamber over a wall behind the agent, firing an assault rifle at a couple of the zombies that were milling around.  Raising her hand, Astrid called out to the fiery paramedic, gesturing for her to run toward their group. 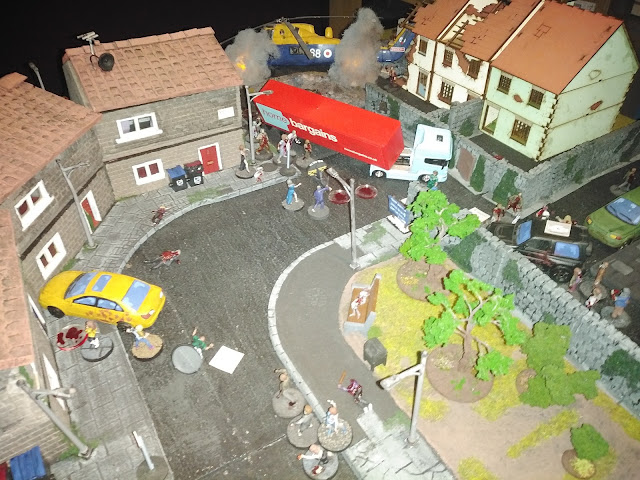 Smith, gasping from the pain in his shoulder, shook his head to clear the woozy feeling that was threatening to drive him into unconsciousness.  The girl was limping passed him, not 10 feet away, but he couldn’t bring his pistols up to take her out.  Grimacing against the agony of the barbed bolt pressing against his clavicle, he staggered to his feet.  Looking around, he decided that discretion was the better part of valour and darted/stumbled along the high wall that marked the boundaries of a wooded park. 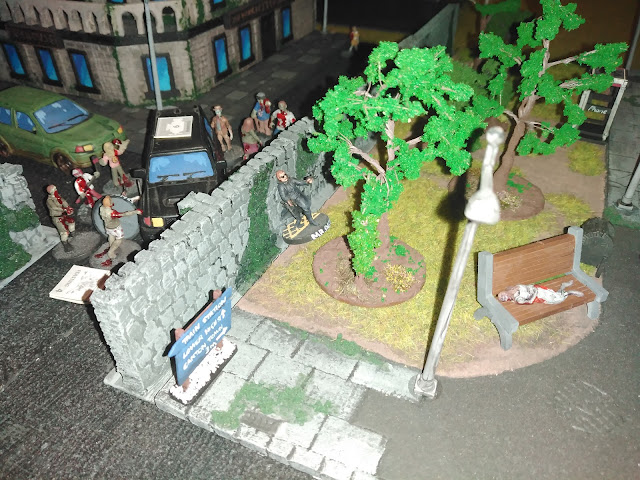 Anna, hearing the stricken cry of Gobbo’s daughter as he was shot down, near boiled over the garden wall that she had been resting behind. Landing awkwardly, she ignored the flare of pain from her ruined ankle, she lifted her borrowed rifle to her shoulder and mowed down a trio of D-Subs that threatened to attack her fallen crewmate.  The paramedic looked left and right but failed to spot the mysterious agent who had gunned down her friend, grimly striding forward as more and more shambling D’s flooded the area. 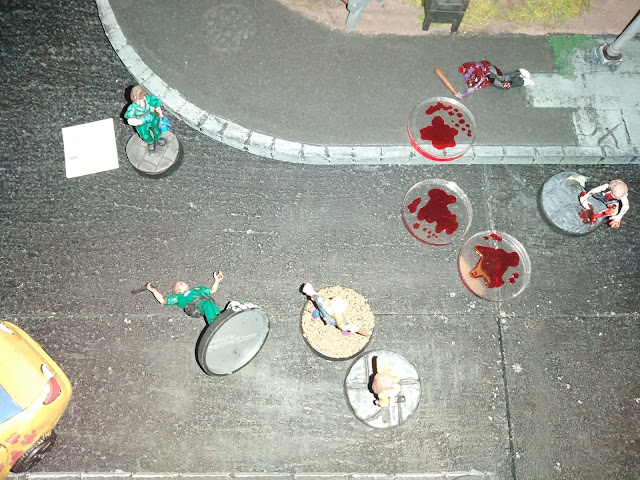 Reaching the fallen medic, she bent down to palpate Gobbo’s carotid artery. Feeling a strong pulse, Anna turned his head, tutting at the crease where the round had scraped passed the older medic’s temple.

“For Christ’s sake Gobbo, get your fat, lazy arse up of the floor!” she shouted in his ear, accompanied by a hard pinch to his trapezius muscle.

With a shout the middle-aged medic, practically jumped up as the pain from his trapezius temporarily outweighed the pain in his head. “What the fuck?!?” he spluttered as he shook his head, trying to orientate himself.  As he staggered sideways, he glimpsed sight of a zed bearing down on his beloved daughter.  Drunkenly he raised the heavy firearm that he still clutched, pulling the trigger and discharging a spray of pellets at the creature and throwing it backward.  The noise chased the last of the cobwebs from his brain and he pulled his kin into a powerful bear hug.

“Touching as this is people, I think we need to get the hell out of here…” Drawled Anna, nodding at the reporter in greeting and pulling on the arm of her crewmate.

“Of course, Putters professional at all times!” laughed the portly medic, delighted to see his young friend and mentor whole. “The ambo is just up the alleyway, ready to go”. 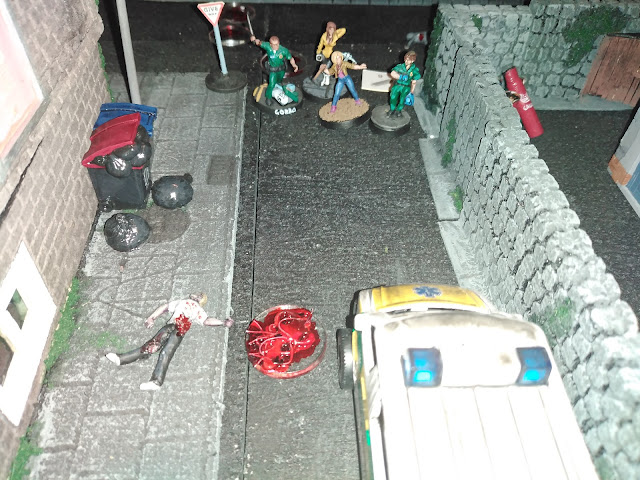 Pistol fire, followed by the sound of roaring engine, drew their attention as they realised that the mysterious agent had somehow escaped. All four of the humans, grimaced at the sound of snapping bones clearly heard over the squealing of tyres. 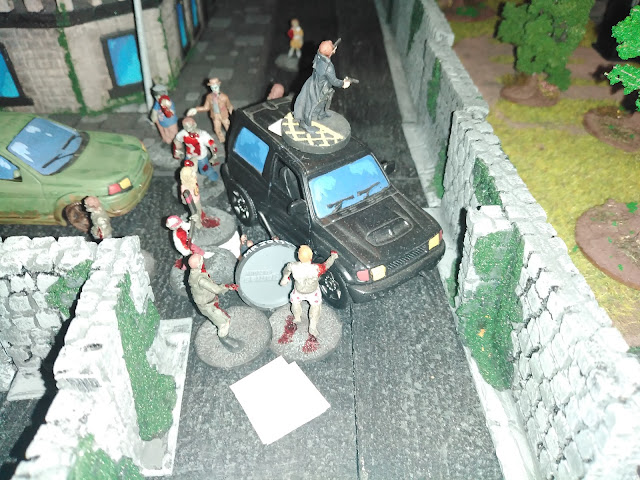 “I somehow doubt that’ll be the last we see of him.” Astrid surmised, slowly shaking her head at the thought of the formidable foe coming after her and her loved ones.  The others nodded in agreement and turn back toward the waiting ambulance and safety.

“Let’s get out of here.” Said Gobbo, grimly stepping over the still twitching remains of the D-Sub he had perforated with his shotgun moments before. 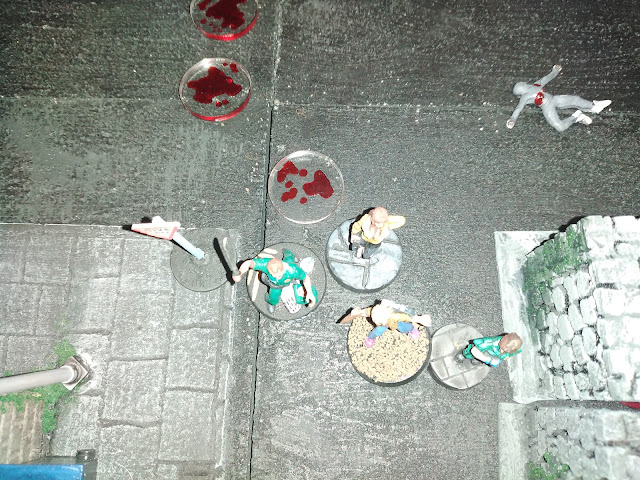 The shock of being shot in the head clearly slowing his thought process, it was some few precious seconds before his brain caught up. Still twitching remains…


With a hungry moan the zed lurched to it’s feet, clawed fingers reaching for April’s clothing and pulling the startled reporter in close, trying to bite the young woman. April tried to swing with her baton, but the creature was too close and pinned her arm to her sides, causing the blow to be ineffectual.  The others, caught by surprise could only watch in horror as the two combatants fell to the floor in a tangled heap of thrashing limbs. After long seconds, there was a loud snap as April leaned her full weight onto the creature, snapping it’s neck and causing it to go limp.

April stood, wiping blood off her coat and looking pale as she staggered toward the ambulance.  “Hurry,” she implored, “we’ve got to get out of here.” Pushing passed her stunned colleagues, she clambered into the back of the vehicle and slumped onto the trolley, staring up at the roof of the truck. 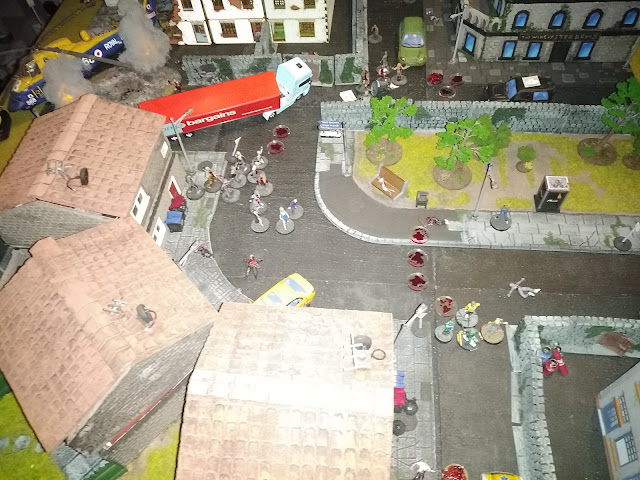 With a shrug, Gobbo got behind the wheel and gunned the engine as the others got into the emergency vehicle.  Throwing it into reverse, he put his foot to the floor and backed the ambulance out of the hot zone. 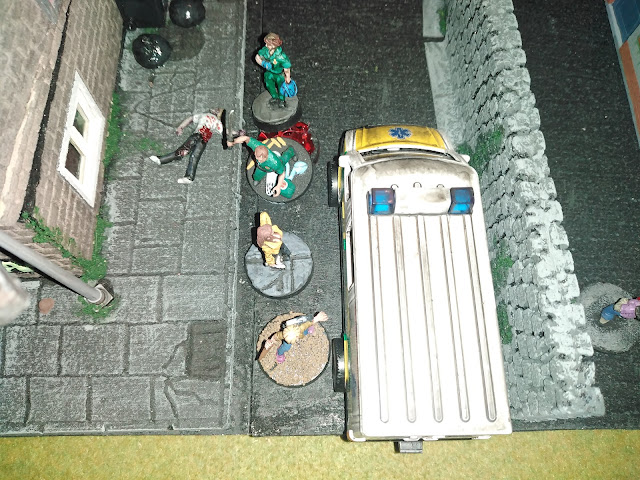 That's it for this episode of my ongoing ATZ - an English Adventure.
hope you enjoy
dGG

April clutched the torn sleeve of her jacket, the pain from the D-Subs bite was abominable and she thought she might pass out. So far she hadn't checked to see if the flesh had been broken by the filthy teeth of the creature and she was petrified to look just in case it had. She'd seen the films, she'd read the books and seen first hand what the bites of the zombies did to humans.  Glancing fearfully around the ambo, she saw the two medics deep in conversation, no doubt catching each other up on the recent events. Gobbo's daughter Astrid, was watching her with her too clever eyes, taking in everything, analysing everything. Nothing would get by that one, nothing...