I was thoroughly spoilt this xmas by my extended family and I couldn't be more grateful.

Most of the bits are set-dressing pieces for a Warhammer Fantasy Roleplay campaign that I will be running in the Spring/Summer of 2019 so aren't particularly exciting to see in isolation but don't worry I will be showing the pieces with some photo sessions during game play as and when I get up and running.

One of the most exciting gifts that I received was "Rising Sun" written by Eric M. Lang and published by CMON. This "miniatures" board game is set in feudal Japan and as regular readers of this blog will know, that just about scratches most of my gaming itches! 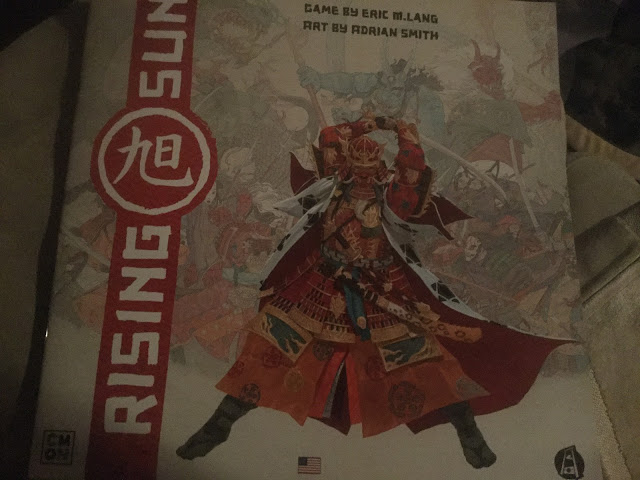 Rising Sun is a board game for 3 to 5 players designed by Eric M. Lang[ and published by CMON Limited in 2017[. Rising Sun is a game about strategy, negotiation, and warfare in a feudal Japan where the ancient gods (Kami) have returned to rebuild the empire. The game was originally released via Kickstarter, raising over $4,200,000. Rising Sun received positive reviews, and was awarded with the 2018 RPC Fantasy Award Tabletop & Miniatures Game Winner.

This blurb is lifted from the ever reliable Wikipedia...

Anyhoo, the most exciting part of this game is the superb range of miniatures (used in the loosest term as they are huge!) that come with the base game.  That said I have got some expansions coming too...  So far I've decided to just paint the monsters (and later the Kami, when the expansions arrive).  This is mostly so I can get it onto the table quicker.  Because it's a board game, I'm going to introduce it to my board gaming group and hopefully get some games in shortly.  In the meantime I will showcase the monsters as and when I get them painted.  Each one will come with a little bit of Wiki knowledge if I can find it...

Today's offerings though is a 2 for the price of 1 as the first one was so simple it took minutes rather than hours.

First up is Komainu

Komainu (狛犬), often called lion-dogs in English, are statue pairs of lion-like creatures either guarding the entrance or the honden, or inner shrine of many Japanese Shinto shrines or kept inside the inner shrine itself, where they are not visible to the public. The first type, born during the Edo period, is called sandō komainu (参道狛犬 visiting road Komainu), the second and much older type jinnai komainu (陣内狛犬 shrine inside komainu).[1] They can sometimes be found also at Buddhist temples, nobility residences or even private homes. 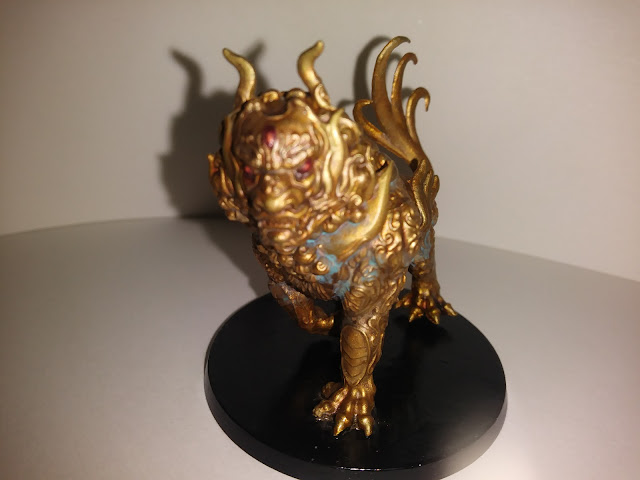 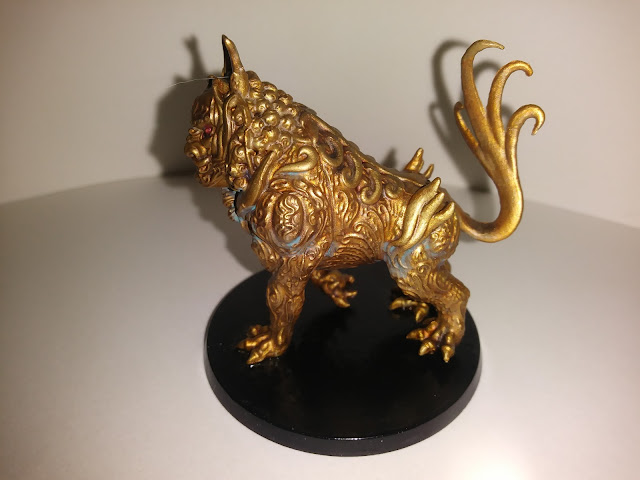 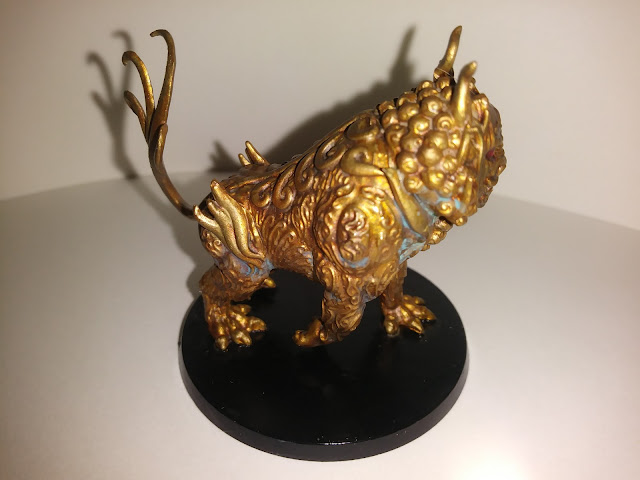 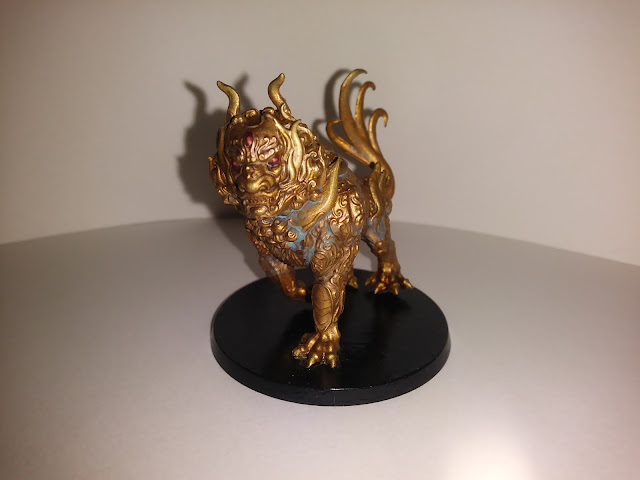 As you can see I went with a very basic gold colouring based on the game art rather than the traditional stone.  I think it looks very striking but it was also dirt easy to paint and all told it took longer waiting for the inks to dry than actually painting it.  I did use some basic weathering in an effort to "sex it up".

Next is my favourite "mini", the River Dragon.  My love for dragons is well documented so I won't go into it here., but this piece is stunning and I was desperate to do my best with it, however the miniature is much simpler than it looks and there were only 3 different basic colours in the whole piece (exc base).  However each colour has multiple shades and highlights which has produced a pleasing scheme and I'm really happy with the results.

Japanese dragons (日本の竜 Nihon no ryū) are diverse legendary creatures in Japanese mythology and folklore. Japanese dragon myths amalgamate native legends with imported stories about dragons from China, Korea and India. The style of the dragon was heavily influenced by the Chinese dragon. Like these other East Asian dragons, most Japanese ones are water deities associated with rainfall and bodies of water, and are typically depicted as large, wingless, serpentine creatures with clawed feet. The modern Japanese language has numerous "dragon" words, including indigenous Tatsu from Old Japanese ta-tu, Sino-Japanese ryū or ryō 竜 from Chinese lóng 龍, nāga ナーガ from Sanskrit nāga, and doragon ドラゴン from English "dragon" (the latter being used almost exclusively to refer to the European dragon and derived fictional creatures). 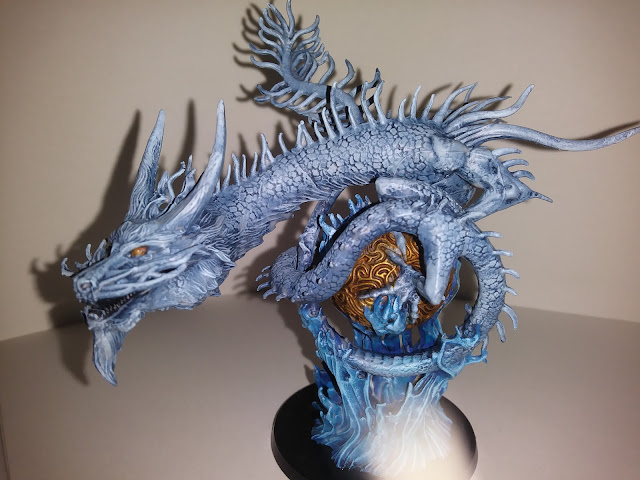 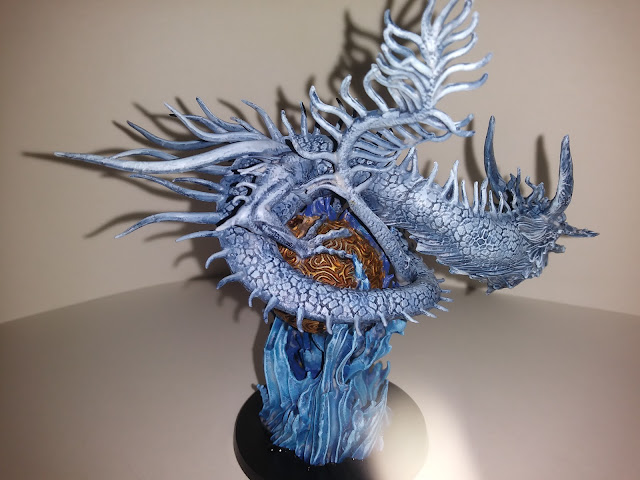 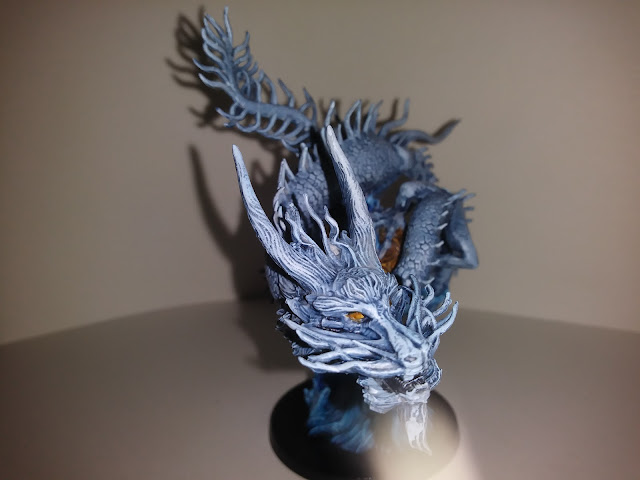 That's it for this week.
hope you enjoy
dGG
Posted by Da Gobbo at 10:42