As the title of the post suggests, I've completed the supermarket that I have been building for my Urban Project.  Last time I posted about it, this was the extent of the build - a shell ready to be populated. 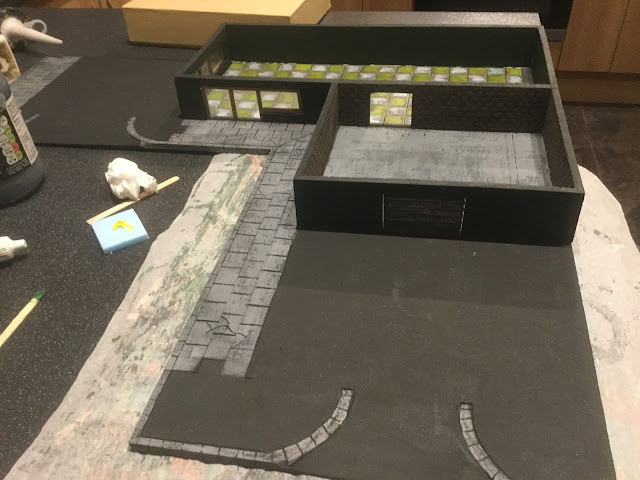 I also put together the shelves for my display counter. 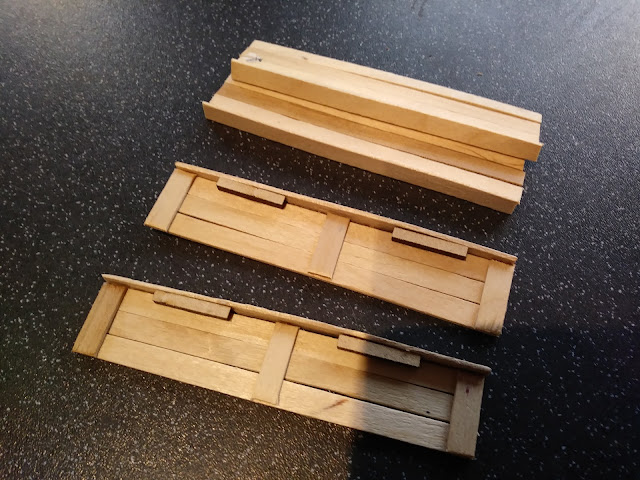 So what have I done since? well for starters I put together the rest of the display counter.  Using blu-foam and coffee stirrers... 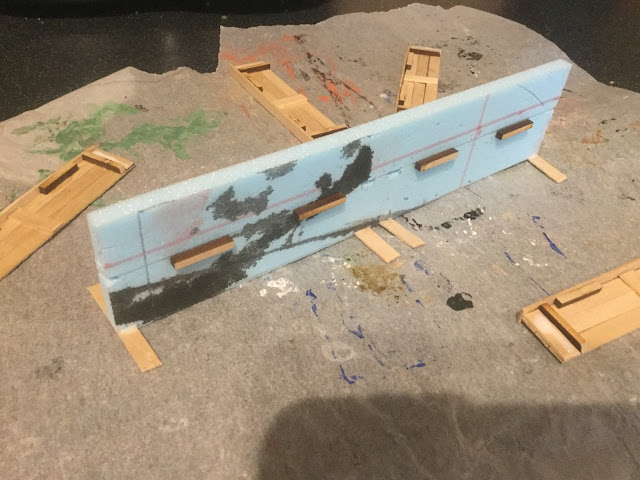 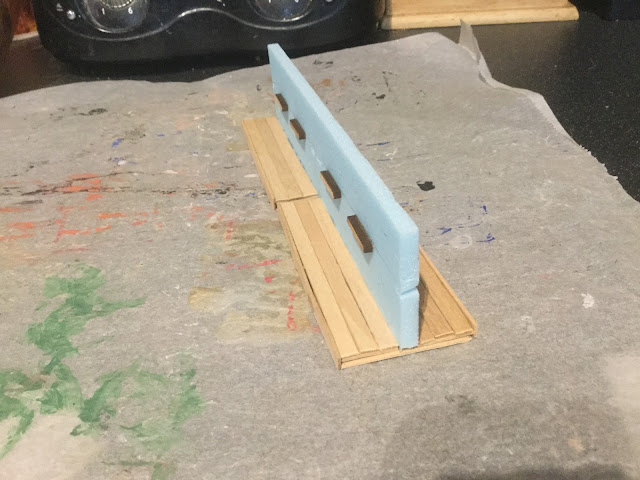 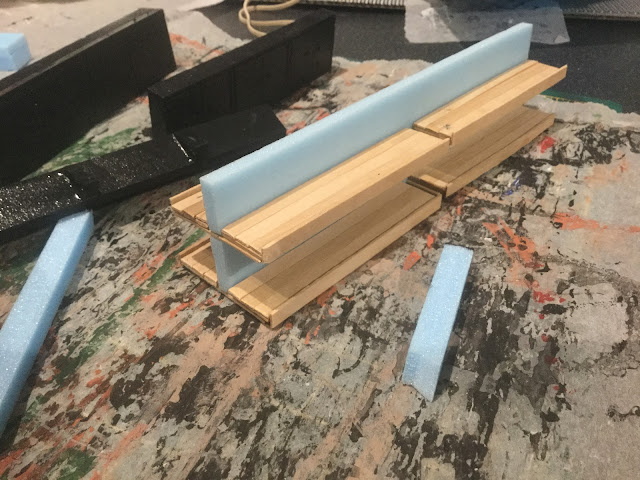 The finished, painted article is further on in this post.  For more detail on the shop floor, I also wanted to add some fresh produce so I built a wooden crate. 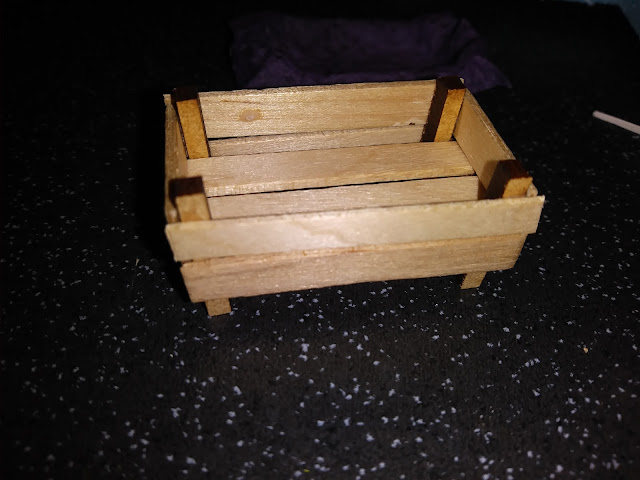 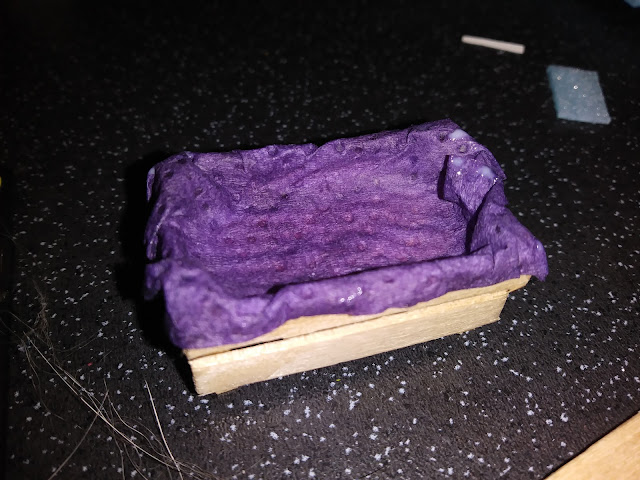 and filled it with these.... 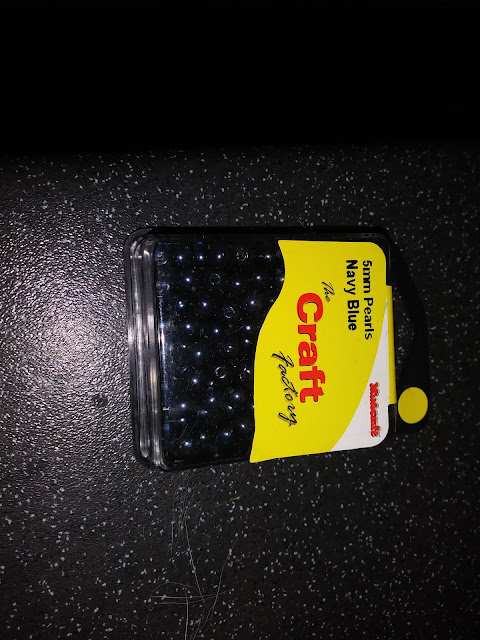 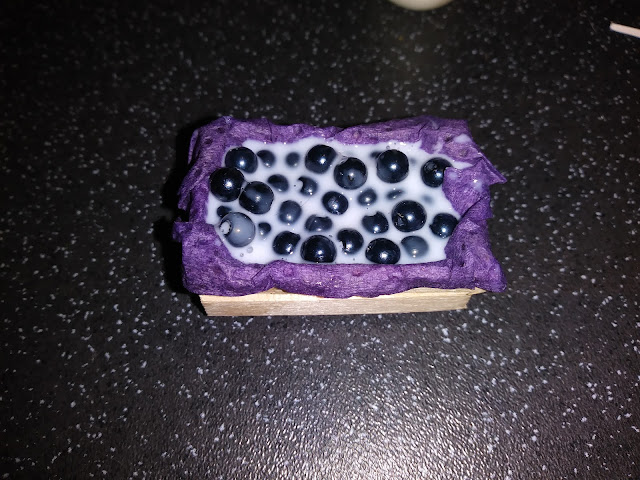 which, again will show up later fully painted.  I also wanted to put up a low, decorative wall around the parking area of the market.  To this end I made some posts out of blu-foam (naturally) and added some beads to give a nice finish. 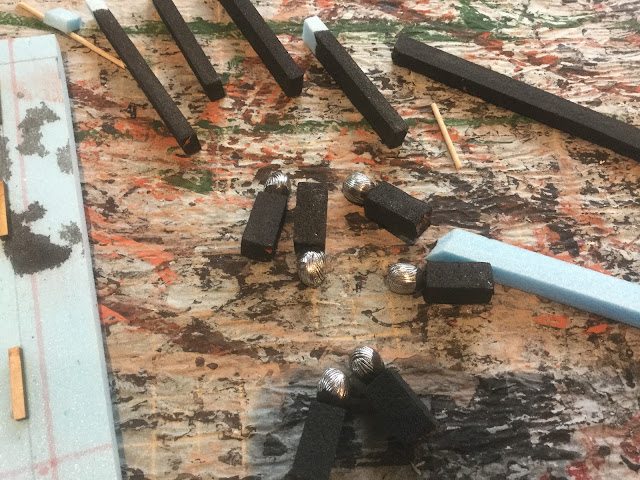 more bits and bobs followed including a rather crooked ladder from cocktail sticks... 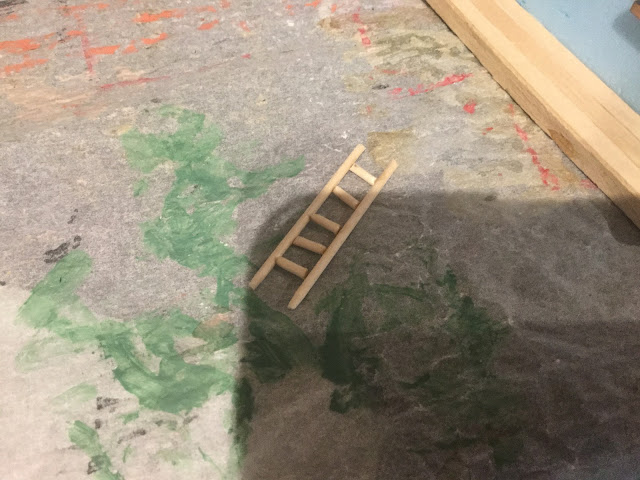 and the flat roof that would cap the piece. 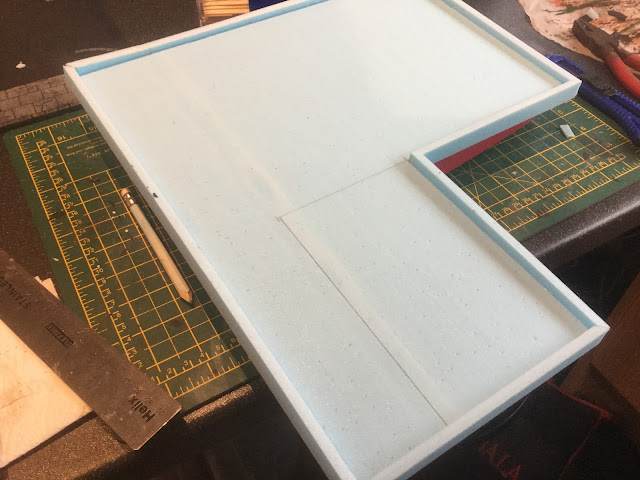 I also wanted to fence of the unloading yard and to that end purchased some mesh from Wicks for a couple of quid, some bending, cutting and swearing later, I managed to get some lengths of fencing made up, which I drybrushed with some rust effect... 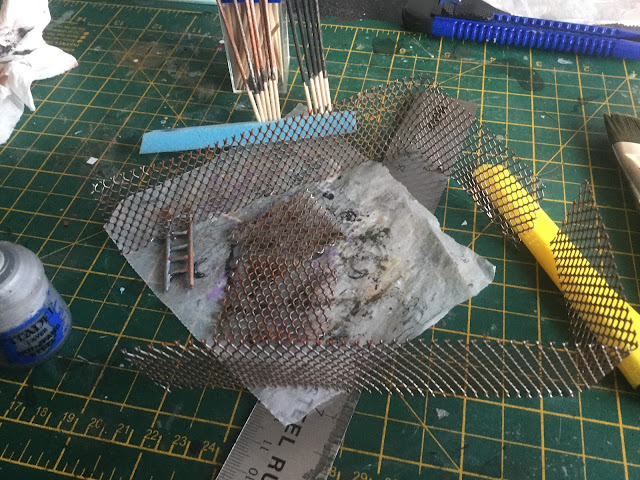 more bits and bobs were made up while I waited for things to dry - here are some road signs made from signs printed from the internet onto photo paper and backed onto cereal box card, then mounted on a cocktail stick on a 20mm base. 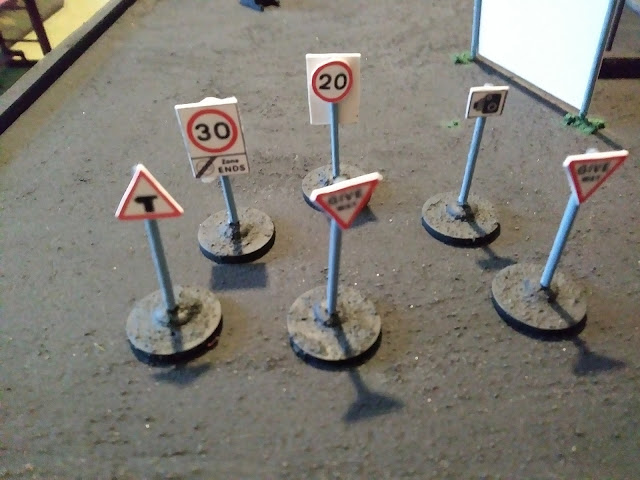 All I did then was put everything together.  The roof was covered in homemade textured paint and capped with a sign that I printed from t'internet. I also printed off loads of advertising signage - supermarkets are a riot of colour and crap product adverts! 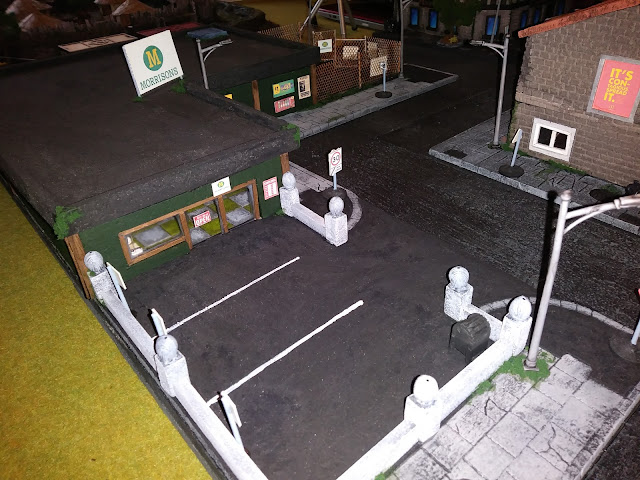 The parking lot got its bays whitelined and signs posted. added to which are my 3D printed trolleys. 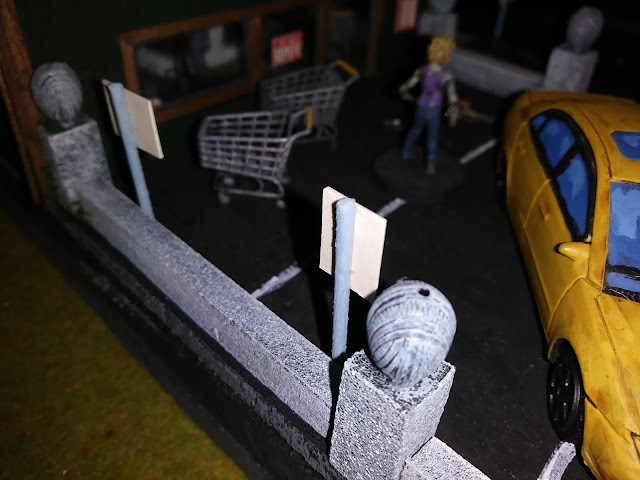 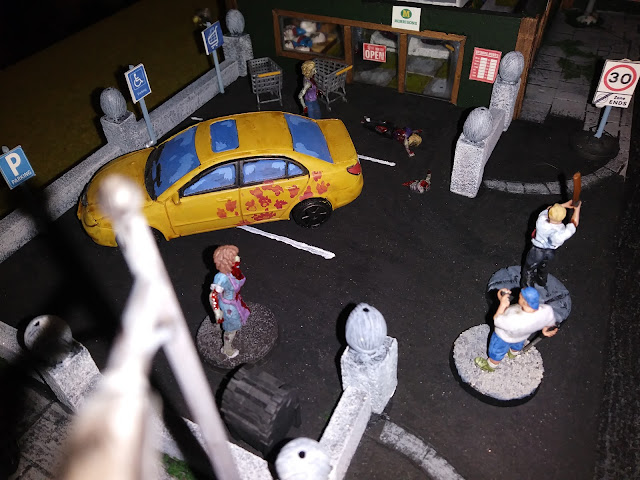 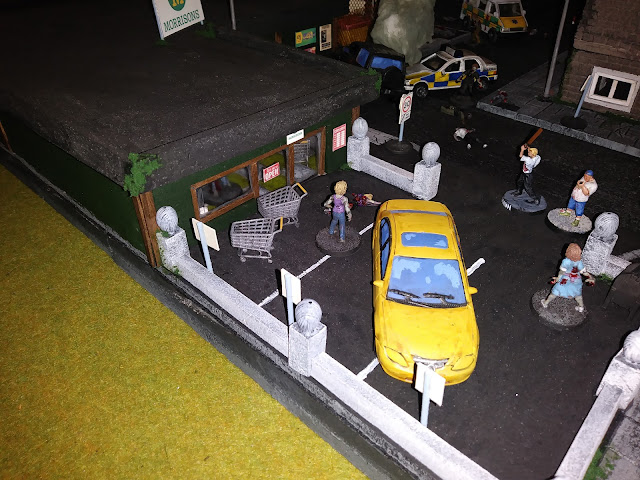 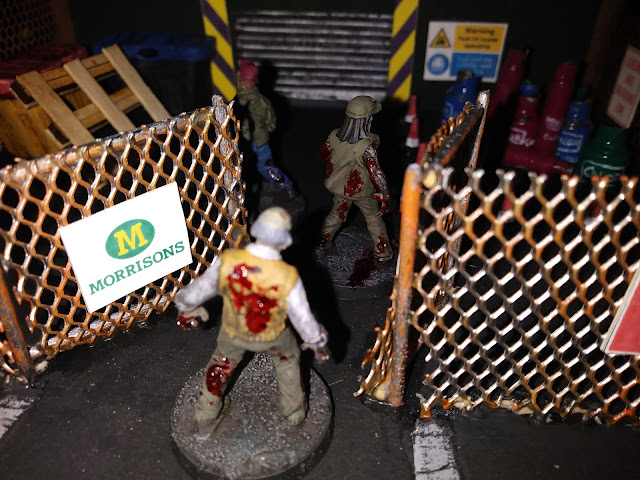 as well as some homemade wheelie bins 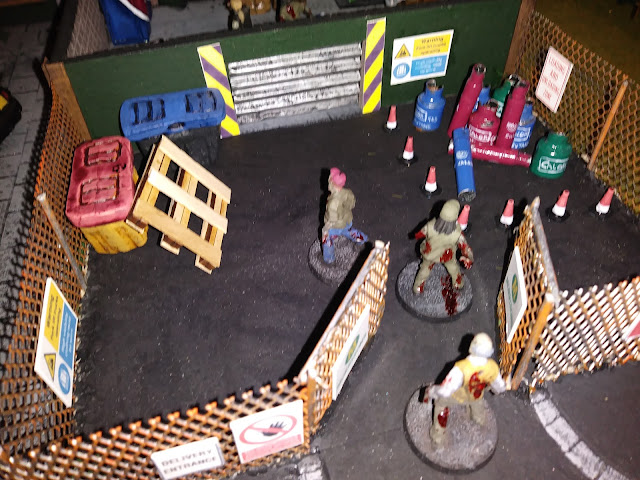 The warehouse got some boxes that I'd sculpted as well as vending machines from Wargames Terrain Workshop and of course last weeks safe! 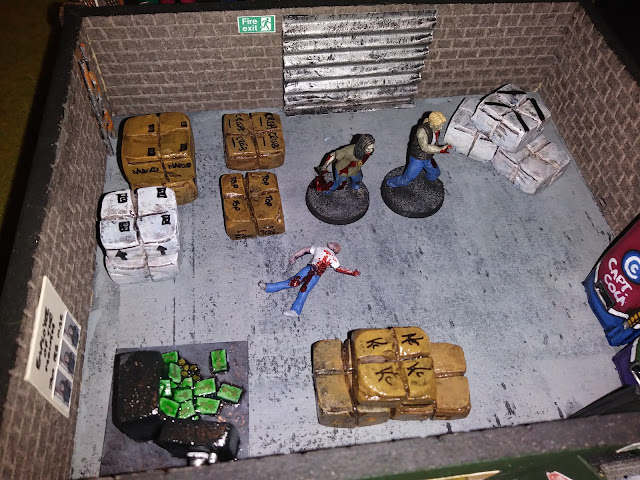 here are the shelves fully loaded with handy supplies for the survivors.... 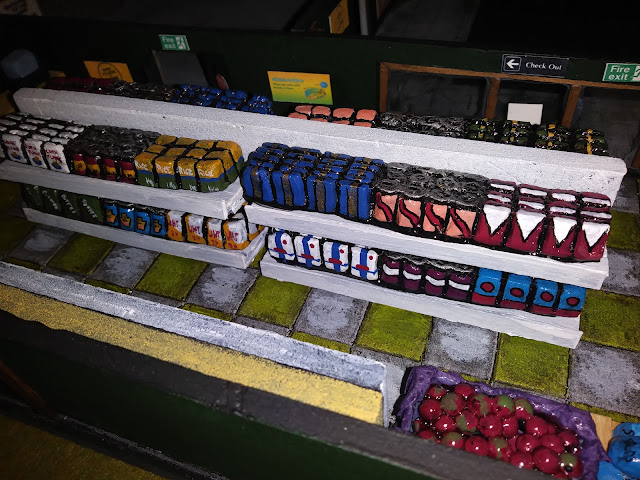 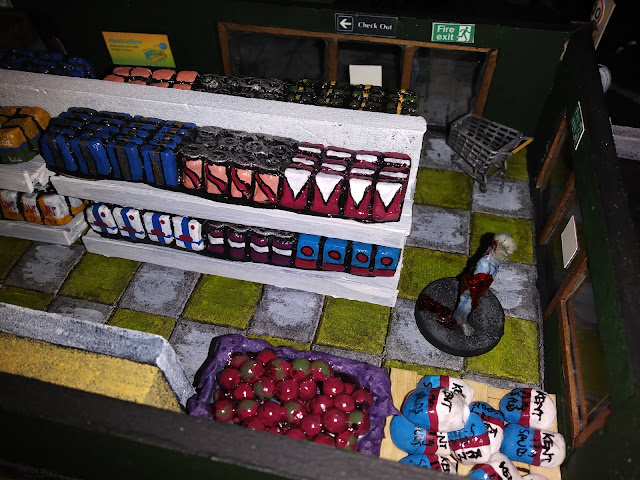 the checkouts are at the far end of the store.... 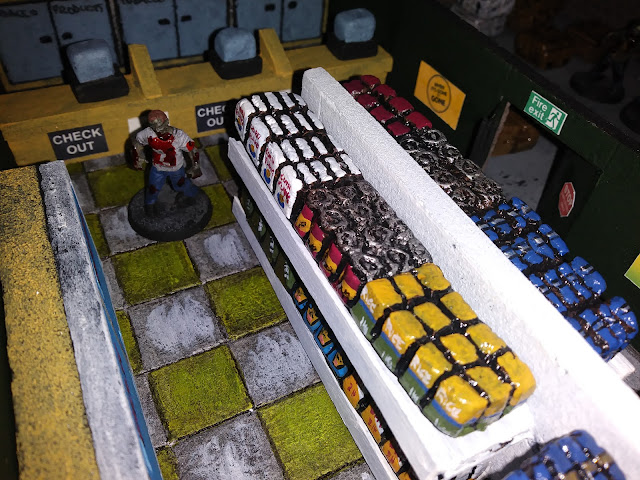 That's it for now as some of the piece is still drying/gluing.  I will, as promised show the whole board next week, fully laid out complete with zeds.