after a little break due to mounting deadlines and a little Bushido tournament, I'm back painting the huge pile of lead and plastic sent to me by Bryan "Vampifan" Scott in his amazing giveaway!  Last time you saw the awesome ABC warrior "Hammerstein" - a 55mm giant robot, he bullied his way to the front of the painting queue because of his magnificence.  So what was next?

Well, this time I had to clear some things up.  In among the unpainted glory was some 2000AD Indie 'clix with their factory paintjobs, this could not be allowed to stand! Now I'm not adverse to the basic jobs that the nice folks at 'clix do - usually, they are normally sufficient to game with until I can get around to adding some shade/highlights etc to better suit my sensibilities - usually.  Until Judge Fire came along and I knew I had to act.... 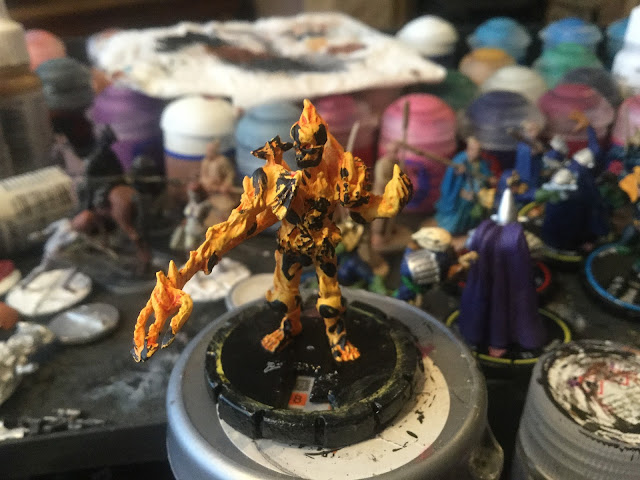 This could not stand! I'm not sure what effect they were going for but it sure as heck didn't work. So into the stripping jar it went, however goodness knows what paint they use at 'clix because all that happened was that the base melted!! 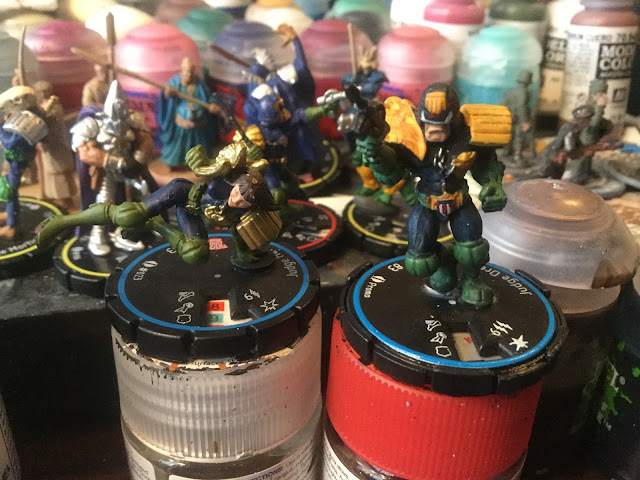 The two Judges I chose to repaint at the same time were Judges Hershey and Dredd, these two weren't bad at all but still needed some work.  Anyway back to JF and I had to go back to the beginning, I had a choice here to either black undercoat and paint individual flames, which would be more like the comic strip of JF being a charred skeleton with flames licking up of it. But I felt the detail was too soft in places to truly get a good look going in this direction, so I thought I would go the other way and paint him as a being on fire completely and just improve the original paintjob. This isn't too far from the comic though as JF would often be consumed completely by fire when he was dishing out the hurt on a bigger scale!  So I went with the white primer. 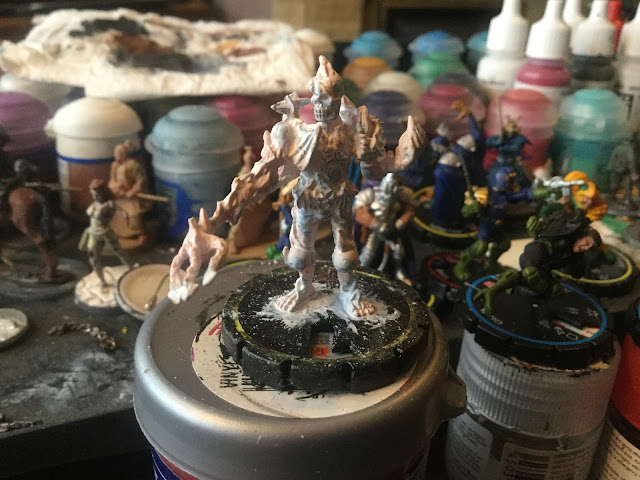 Then going back to my usual way of painting flames, I had to think of where the source of ignition was.  This was a bit more difficult because essentially the source is within JF himself, so he then got another coat of paint this time a light yellow mix 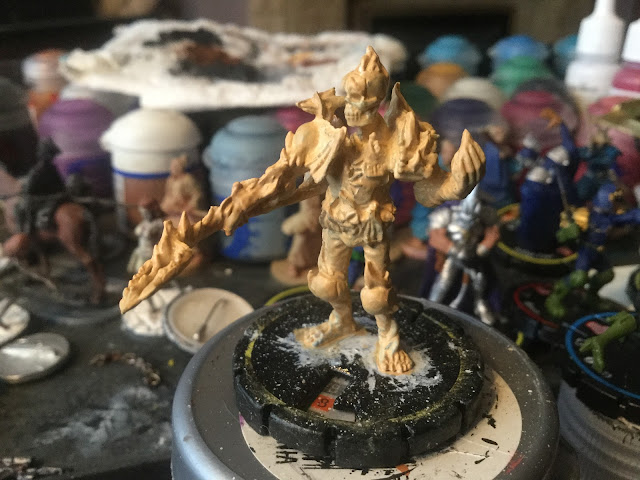 Unfortunately I forgot to take anymore WIP photos, suffice to say I used a orange brown to work up the flames and finished with red washes and a dark, smoky red for the tops of the flames and then pure white highlights throughout.


JH and JD had their uniforms repainted black and then a dark navy drybrush to finish. Their pads are a mix of GW's "knarloc" and "sybarite" green, washed in "thrakka" and highlighted back up. Then I used a shiny gold for the Eagle pads rather than yellow. New flesh tones to faces and a lightening of JH's hair tone and red trim around the edges of JD's helmet and voila...

As I wasn't going to use these figures in a heroclix game, they needed to be rebased and I used some plain 25mm rounds.  I'm going to keep the bases simple in my 2000AD collection, so it was a simple sand and drybrush finish.  However having seen Bryan's excellent job on Hershey's base (see here) I decided to pinch the idea shamelessly.  Casting my gaze around my many boxes of bits and bobs I couldn't decide what to do, initially I was going to build a cantina table or something, then I thought about using the crumpled form of a defeated perp but I couldn't find a suitable mini, in the end I settled for a bit of girder made from a bit of sprue and then I added a crumpled newspaper from a sheet that Bryan had sent to me some time ago. 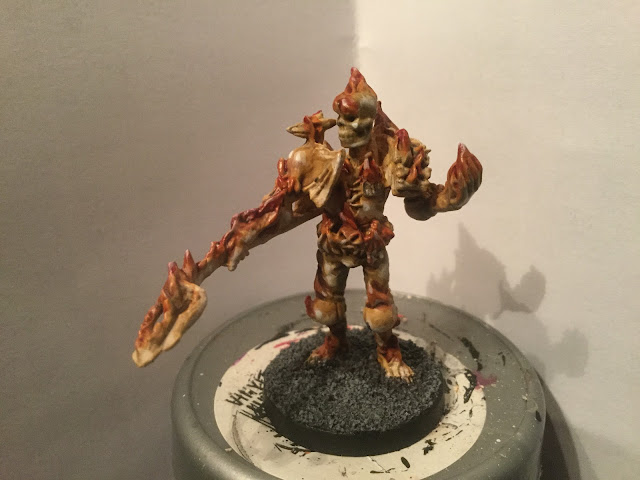 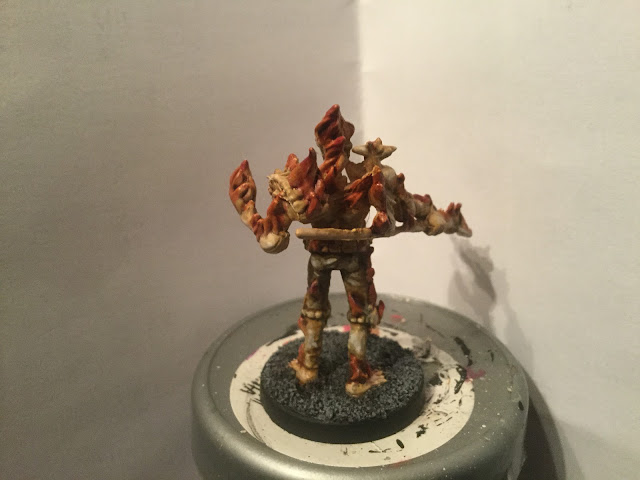 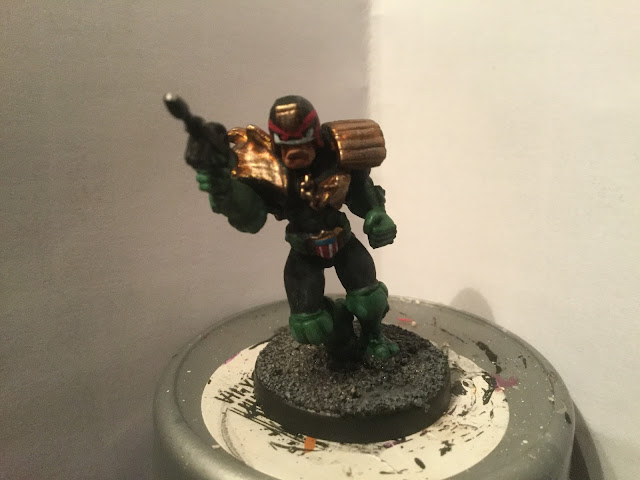 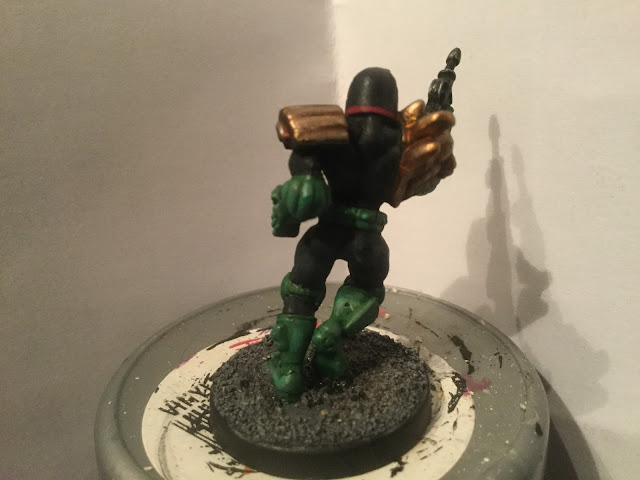 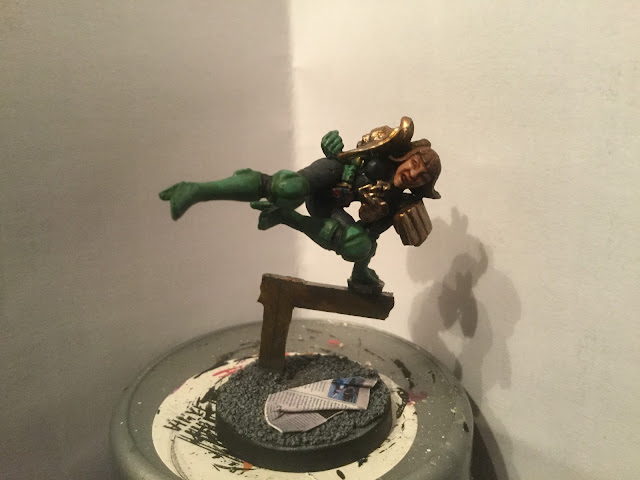 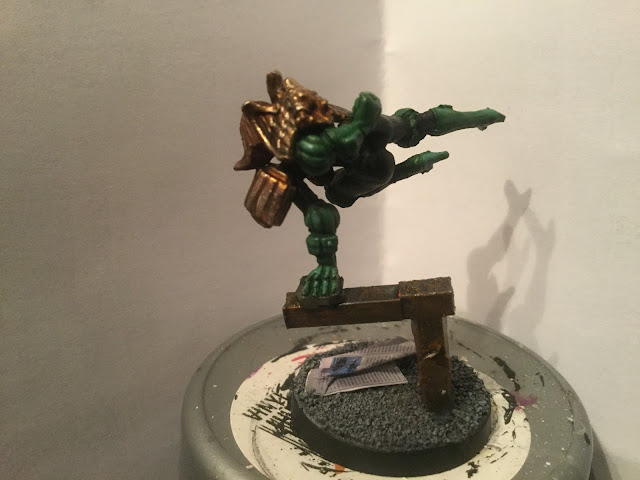 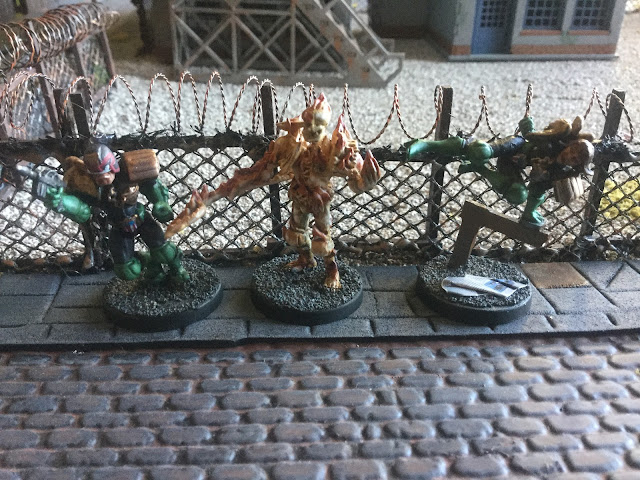 so those are the first three models sorted. I have a few more on the table including a med judge and a couple of SJS judges, Zarjazz times ahead!!