A very quick post (I know two in one day) but I'm very excited to be part of Clint's upcoming play by blog campaign Here. A resource management game set in Klintastan during the 30's. I've never participated in one of these before and I'm really looking forward to it.  Anyway, Clint for some very good reasons has decided not to make a map and I agree with those reasons from a pure administration point of view let alone the way that a map could influence players. BUT I need something a bit visual just to solidify things in my head, this has been repeated by other participants with some lovely computer maps being produced, however I can't get my low tech brain to do that, instead I've gone a little old school and put together a map on my whiteboard in da Grotto. 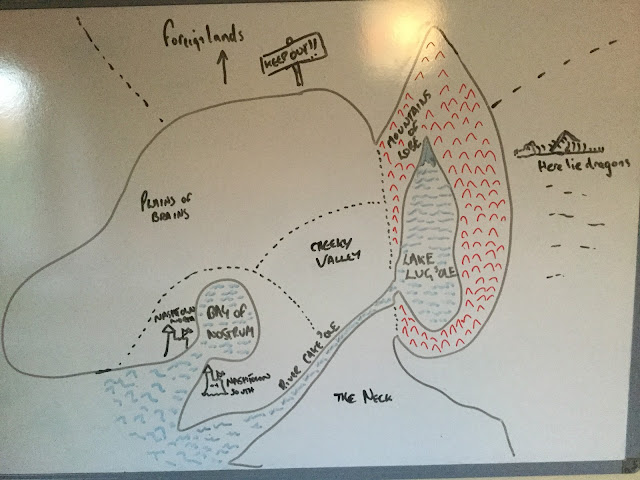 This is Gobboland, a "meritocracy" where people's status is determined by their merits. It is ruled over by Warboss Nash, a less than benevolent leader whose merits include "Champion Nosepicker 1926" but more importantly "being the biggest, baddest, nastiest bastard in Gobboland!" Each territory is divided into 5 regions that produce a resource that helps them further into the game. My regions are - firstly a Fruit resource that I've decided is a wine producing region i.e a bunch of vineyards located to the south of the river "Cake'ole" called "the Neck". Secondly is a Livestock resource to the east along the "Lobe" mountain range, where folk keep goats and sheep among the foothills of the peaks and watered around "Lake Lug'ole". Third we have to the north, the "Plains of Brains" a vast grassland that produces tonnes of Grain. Next up we have more Fruit, apples and pears all grown in the orchards of the "Cheeky Valley" along the northern banks of the river and in the central region of Gobboland. Lastly we have another Livestock region and the seat of power for all Gobboland, the twin cities of "Nashtown North and South" located around the "Bay of Nostrum" the cities main source of income is fishing although trade is central to the power of the cities.

Anyway, I will update you as and when I can regarding the fortunes of Warlord Nash and Gobboland, so stay tuned!