With a rare weekend off and my back less sh*tty than recently, I've been absolutely on fire and really pushed on with the project, so I thought I would put out another post (two in one weekend!)  Last time I finished the office, today I finished off the canteen and entrance hall and also started and finished an x-ray room (up until yesterday it was going to be a library!)

The canteen furniture was made up of foam-board and foam sheets for the counter, oven and sink unit in pretty much the same way I've made up everything else so far.  The sink had the paper backing removed on one side of the foam-board and plastic glue used to melt the recession and then a foam sheet topped it off to give it some detail. The tap was made up of mdf scraps as per the sinks in the W/Cs.  The tables were made up of round mdf scraps and a push pin base and chairs made up the same way as the office chairs just painted white to resemble simple plastic canteen furniture.  A scraps money-till and pile of trays finish the detail.  Later on I might make a sneeze guard and serving tureens to finish the counter, but for now it will do. 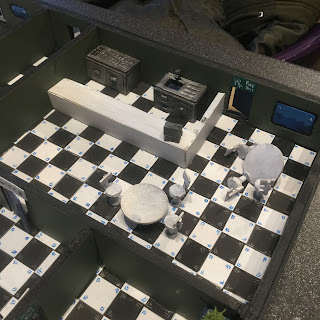 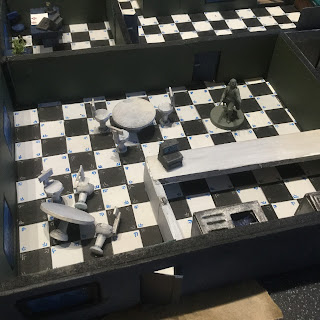 The atrium was going to be a large space with little to get in the way, although later on there will be removable scatter furniture.  It just consisted of a reception area, with scratch built pcs and phones and a pot plant to finish. The counter was decorated with coffee stirrers to reflect wood panelling.  The counter top was going to be marbled but my paint job was not up to task! since gluing it in place and the detailing added I've had a brainwave on how to paint it like marble but alas it's too late....


The x-ray room is now one of my favourites and I'm glad my wife suggested the change, i'll make a nerd out of her yet!  The x-ray machine is my fave build yet and I'm really pleased with it, mdf scraps to the rescue and some wires scavenged from an old pc base unit.  I'm also really pleased with the way the projection unit for the x-rays came out as well and I really enjoyed painting the x-rays too.

Hope you are enjoying this as much as I am :)