More WIP for the Hosp project

ive been cracking on full steam ahead since submitting my last piece of uni work for this year (just an exam to go...gulp!) all the external walls have been painted inside and out, I'm sticking to the institutional green as it lends itself to a NHS building. The grey on the outside was easy enough, just a spray over a black undercoat. The foam that I used to line the outside to give a 3D effect also helps to disperse the paint a bit and give it an almost dry brushed look, which frankly needed little extra touching up. I will come back to it afterward and add some weathering detail but this will be after the next floor is complete so I can get some consistency in the colouring. The windows were all given a simple black frame to make the blue of the window pop a bit more.  The doors are just a simple fenris grey.

The problem I had with this level though was the floor. Initially I was going to paint on some squares to represent floor tiles, but this did not sit right with the idea that the model was going to be 3D and to be honest when I started painting the squares it proved to be exceptionally difficult. The solution then was to tile the floor, to this end I sprayed loads of card stock black and white, measured out and cut nearly 700 tiles, hand painted highlights/patterns on them and glued them in! This had its own problems as it raised the floor by a mm which now has to be sliced off the interior walls...d'oh! Still the result is very satisfactory.  Another unexpected effect (unexpected by me alone I'm sure) of gluing the floor in was some warping of the foamboard underneath which has necessitated me putting heavy weights on it to try to flatten it.

I have also started to make some of the interior furniture too, all from little off cuts of foam, foamboard and mdf, starting with the chapel and W/Cs. To that end I have made 2x pews from coffee stirrers. The altar was just rough cuts of foamboard stacked and covered with toilet tissue paper painted a rather clergy like purple. The cross was made of mdf off cuts as was the chalice with a WWII British helmet for the bowl. The arm poking out from under the cloth is from the same sprue as the helmet, painted black - maybe that's where the padre is? The good book was a piece of foam folded over and glued with pva, when dried I scored the edges to represent pages. The toilets were fun to make! Foamboard with the top piece of card removed to expose the foam, I then used plastic glue to melt a bowl shaped indent in the middle, a piece of foam as a lid and a matchstick handle and it looks cracking! Same sort of procedure with the wash basement, the tap was made with mdf offcuts  and a piece of card painted Mithril silver for a mirror completes the look! 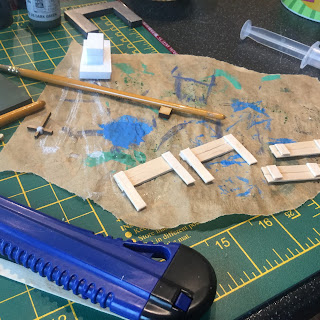 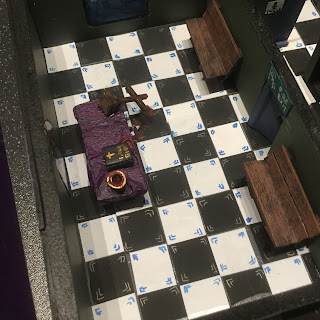 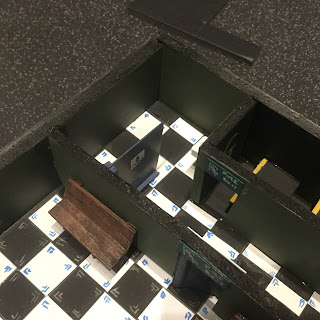