Following on from last week's post showing the monsters from the expansion for Rising Sun. This week we have the final two.

Firstly we have Jorogumo…

this from wikipedia
orōgumo (Japanese Kanji: 絡新婦, Hiragana: じょろうぐも) is a type of Yōkai, a creature, ghost or goblin of Japanese folklore. It can shapeshift into a beautiful woman, so the kanji for its actual meaning is 女郎蜘蛛 or "woman-spider", and to write it instead as 絡新婦 ("entangling newlywed woman") is a jukujikun pronunciation of the kanji. In Toriyama Sekien's Gazu Hyakki Yagyō, it is depicted as a spider woman manipulating small fire-breathing spiders.
Jorōgumo can also refer to some species of spiders, such as the Nephila and Argiope spiders. Japanese-speaking entomologists use the katakana form of Jorōgumo (ジョロウグモ) to refer exclusively to the spider species Nephila clavata.
this from Fandom

Jorōgumo (絡新婦 or じょろうぐも, Jorōgumo) is a yôkai with the form of a spider, that can change its appearance into that of a seductive woman when it wants to eat a human. Even when it is in its human form though, its reflection will show a giant spider. It can not be killed by any kind of poison. The name Jorogumo is that of the Nephila Clavata, a real kind of spider.

In Japan, some spiders are known to possess amazing supernatural powers. One of these, the jorō-gumo, known as the golden orb-weaver in English, is the most well-known of the arachnid yokai. Jorō-gumo are found all over the Japanese archipelago, except for Hokkaido. Their body size averages between two to three centimeters long, but they can grow much larger as they age; some are large enough to catch and eat small birds. These spiders are renowned for their large size, their vividly beautiful colors, the large and strong webs they weave, and for the cruel destruction they wreak on young men. Their name is written with kanji that mean “entangling bride.” However, these characters were added on to her name much later to cover up the original meaning of the name: “whore spider.”
Jorō-gumo live solitary lives, both as spiders and as yokai. When a golden orb-weaver reaches 400 years of age, it develops magical powers and begins to feed on human prey instead of insects. They make their nests in caves, forests, or empty houses in towns. They possess a cunning intelligence and a cold heart, and see humans as nothing more than insects to feed on. They are skillful deceivers and powerful shapeshifters, usually spending their lives appearing as young, sexy, and stunningly beautiful women. 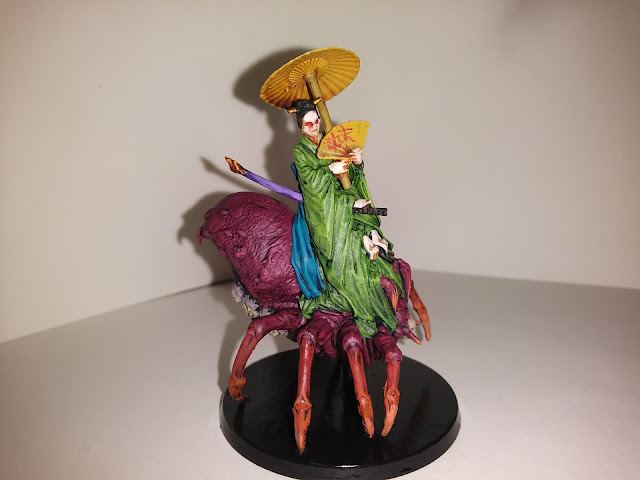 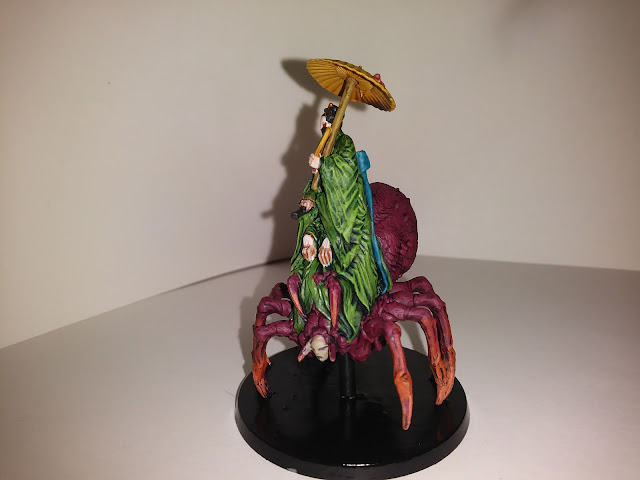 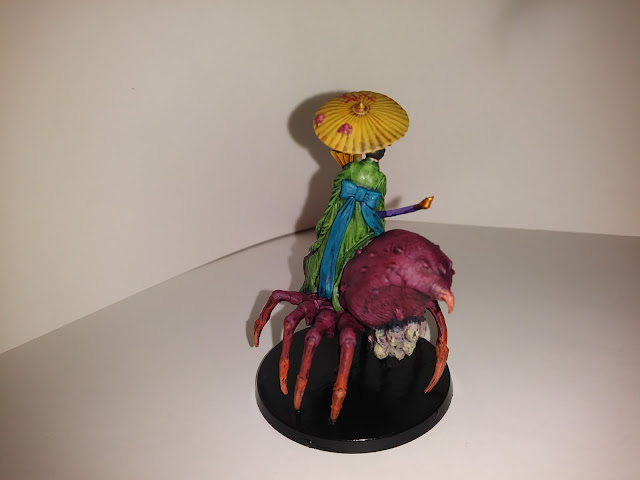 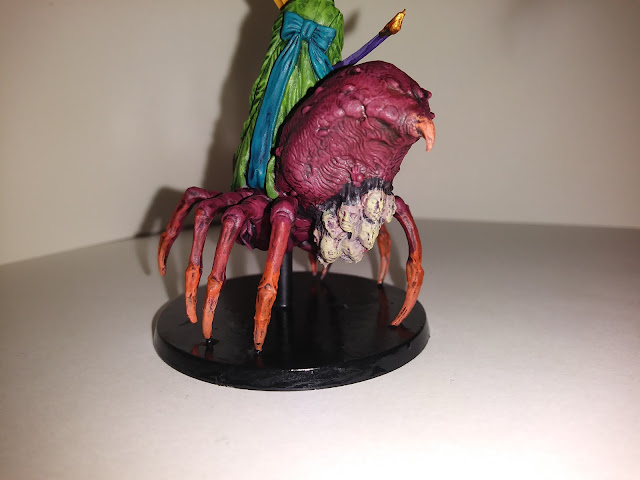 while this is isn't my favourite sculpt, the Jorogumo has one of the most fascinating legends so I really enjoyed painting this.  The gruesome egg sack under the creatures abdomen is particularly characterful.

Next is the Earth Dragon...
In Chinese mythology, dilong 地龍 "earth dragon" is one of many types of -long 龍 dragons such as shenlong 神龍 "divine dragon" and huanglong 黃龍 "Yellow Dragon". Since dì 地 "earth; land; soil; ground" semantically contrasts with tian 天 "heaven; sky" (e.g., tiandi 天地 "heaven and earth; universe", see Tiandihui), the dilong is paired with the tianlong 天龍 "heavenly dragon". Chinese dragons were supposedly able to fly, and thus were considered celestial creatures rather than terrestrial ones like the "earthbound" dilong. Two other exceptions are panlong 蟠龍 "coiled/curled dragon; a dragon that has not ascended to heaven" and tulong 土龍 "soil/earth dragon", which refers to the tuo 鼉 "Chinese Alligator" (cf. Japanese mogura 土竜 "mole"). 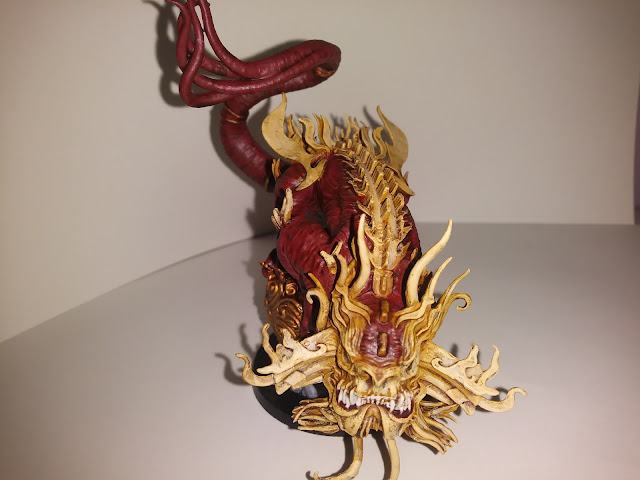 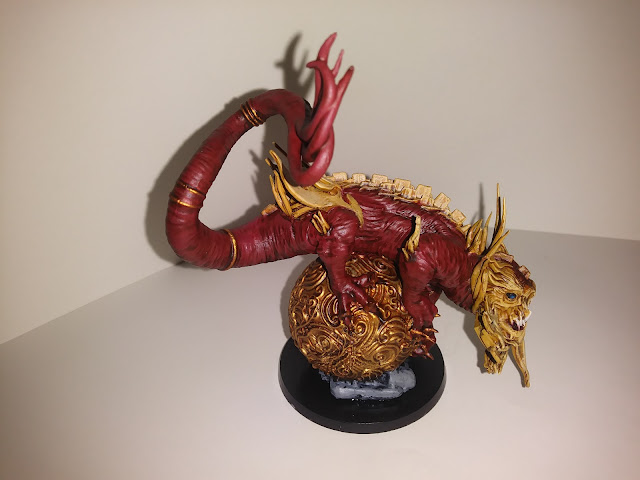 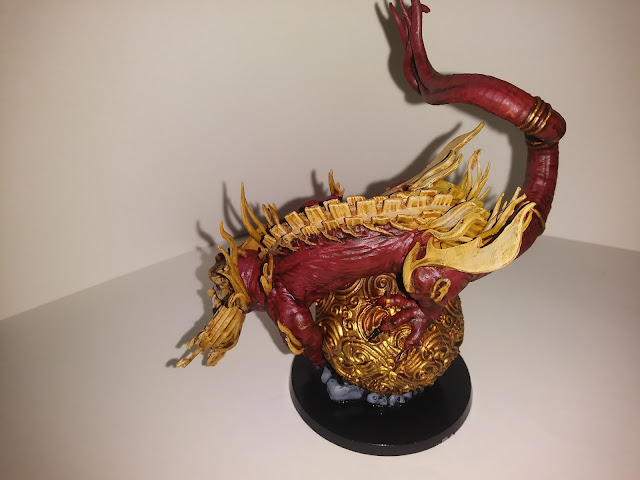 I used a lot of yellow and flesh washes on the reds of this Dragon in order to achieve the reddish brown flesh, which helped link with the spines and whiskers of the mighty beast.

Finally here is a group shot of the expansion pack. 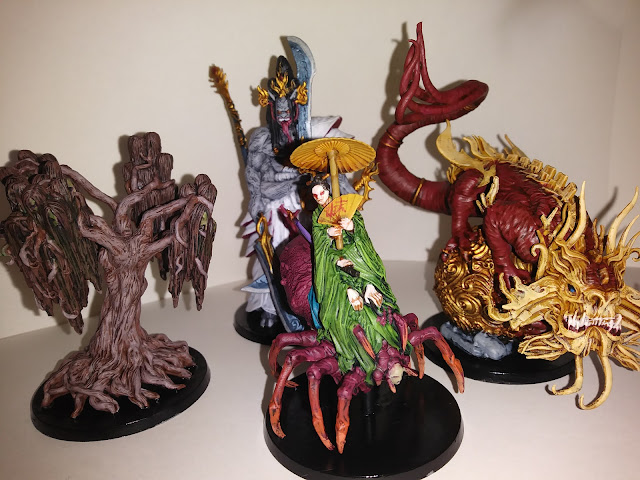 I have just one more expansion to finish which will feature the sacred Kami.
hope you enjoy
dGG