With the slightest rustling of the dry autumn leaves, the foliage parted .  A soft, black nose twitched as it pushed through the undergrowth, analysing the tiniest scents for hidden dangers. Finding none, the nose was followed by a slender, white muzzle topped with a reddish brown fur and flashing amber eyes that darted into every shadowy hiding place in the deep forest.  Satisfied that she was alone, the small vixen slunk into the clearing and darted toward the clear waters of the babbling brook that split the twisted trees of the old woods.  Quickly she dipped her sleek head and lapped at the cool, sweet liquid, closing her eyes momentarily at the relief provided by the spring water. 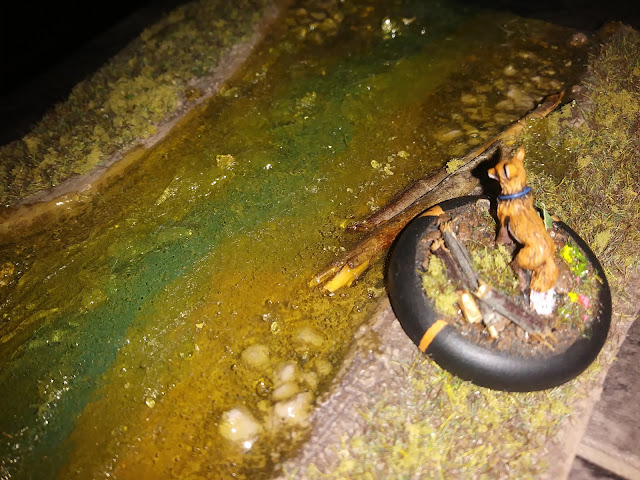 A brief flicker of shadow was the only warning she had, although it was all she really needed! Like lightning she bunched her haunches and sprang to the side as the razor sharp blade of a katana split the log she had been sat upon. Bowled over by the speed of the attack, the fox  rolled to her feet and bared her needle-like teeth in a threatening growl at her attacker, expecting another slash from the deadly weapon.  The figure before her was swathed in a billowing, yet threadbare cloak the colour of smoke.  Hood pulled low over it's face, her attacker stood in a slightly stooped posture, that masked it's true height.  The rest of it's clothing was just as ragged as it's cloak with drab brown trews and a woodland green tunic.  A barking laugh caused her to snort in frustration as she finally recognised her opponent... 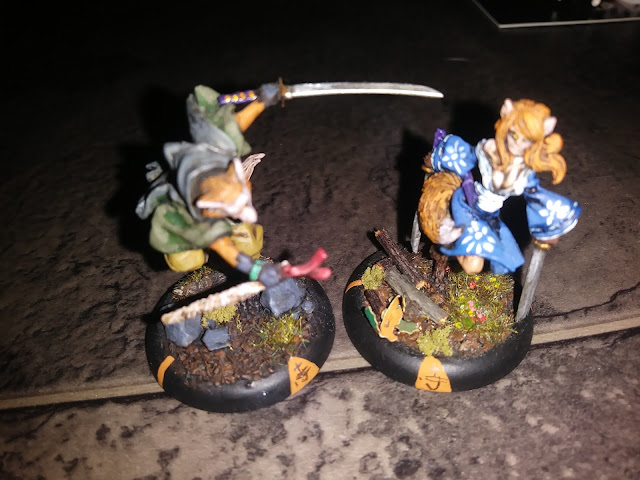 Drawing on her Ki, the Kitsune grew quickly in size, standing upright on her rear legs until she fully transformed into her humanoid form.  Swift as a viper's tongue she drew her twin blades and leapt forward, pressing them against the ruddy brown furred neck of the male as he was drawing the hood back from his foxy face.

"Easy sister, you are in my home remember" the male - Kyuubi snarled, drawing blackened lips over his sharp canine teeth.

"and not invited either, I might add." he emphasised with an angry swipe of his heavier weapon.

"In fact, I believe you were told, quite pointedly not to return under pain of death!"  He finished with a sudden dash at the female, his katana leading the way.

Unfazed, the Kitsune stood her ground, the tip of Kyuubi's sword a hair's breadth from parting her breast.

"Enough of the theatrics brother!" she snapped.  "Save it for the elders, they love a good performance..."

With a shrug, the male Yokai slowly sheathed his weapon and eased back from the fiery female. Not willing to provoke his volatile sibling but not yet ready to concede defeat, he turned quickly, causing his cloak to billow out like a storm cloud, catching her sensitive nose with the edge of the coarse fabric.

The Kitsune bit her tongue to stifle the sharp retort that threatened to escape.  She needed her brother and his skills if she was going to help Akari and his monks restore the Balance.  Sighing loudly she stalked after Kyuubi, calling after the male before he disappeared into the woods.

"Peace brother" she pleaded, "The Balance is at risk, I need your aid"

Hidden in the recess of his hood, Kyuubi's fox-like muzzle split into a teeth filled grin as he pictured the coming storm, what mischief they would make once more. It would be just like old times! 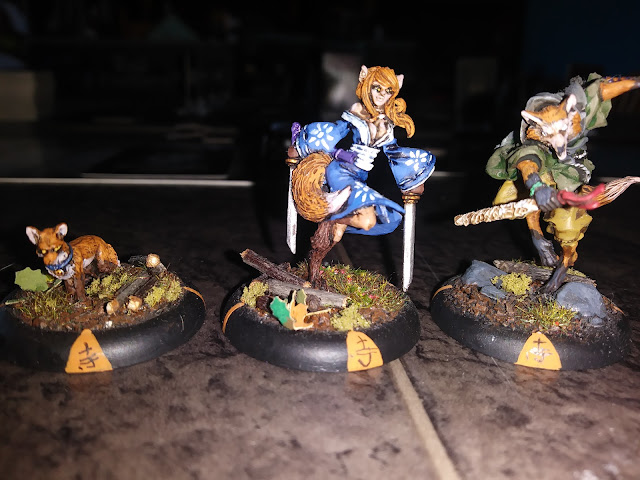