this weekend I took my chariot based game to a board game convention being held in my local area.  It was a small one attended by less than 50 people and perfect for me to demo "equorum sudorem sanguinis" or Blood, Sweat & Horses. 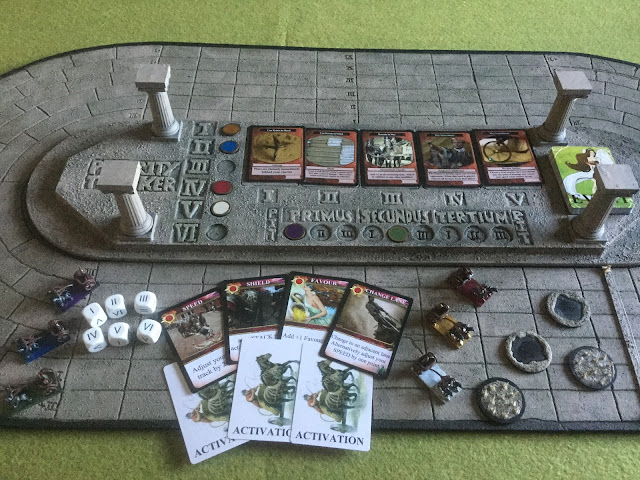 With a minute flick of his wrist, Lucius Hamiltoni adjusted the reins gathered around his left arm.  His team of matched black horses responded instantly, whinnying softly as they drew to a halt in the hot sand of the arena.  Lucius licked at his dry lips, glancing left and right to take in his opponents in todays race, his free hand wiping nervous sweat down the stiff, red dyed leather armour that denoted his team colours.  On the far side stood Nigellus Manselii, born in the far province of Britannia, he had fought the chariot warriors of Cantia, Durolitum and even the legendary Iceni tribe, or so rumours said. His huge black moustaches contrasted starkly with the pristine white of his team banner as he stood proudly awaiting the start.

Next to him was the highly animated Jensini Buttonia, his huge arms raised in tribute to Mars and Epona – the god of war and goddess of horses.  His powerful grey stallions stamped their plate-like hooves, snorting their disdain for the other horses in the arena, muscular flanks striped with green paint that denoted the team for which they raced.

Lucius, his nerves already stretched taut with anticipation for the contest, almost jumped as the last of the racers edged their sleek machine alongside.  Drawn by slender Arabian mares, deceptively muscular despite their smaller stature, they were the perfect match for the enigmatic charioteer that drove them.  Alani Prostus stood not more than 5 pes tall, but her powerful presence seemed to dominate the field of contest.  The only female to have raced the Hippodrome, she had clawed, bitten and ground her chariot wheels across her enemies in order to gain a grudging respect among her male counterparts.  Swathed in a billowing azure cloak, flapping in the gentle breeze that stirred the sands of the arena, she proudly displayed the blue team colours ignoring the disdainful glares of the other teams.

The wall of noise from the enormous crowd died down to a muted roar as the diminutive figure of the Master of Ceremonies strode to the podium. Bernius Ecclestonium raised his hands to silence the crowd further, until an eerie near silence filled the arena.  With a piercing voice that reached the far corners of the Hippodrome, the Lord of the Arena spoke the words they all had been waiting to hear.

“Citizens of Rome, are you ready to be ENTERTAINED!!”

So I managed to snag some of the board-gamers for a couple of hours to try out the game and give me more feedback on how it plays. 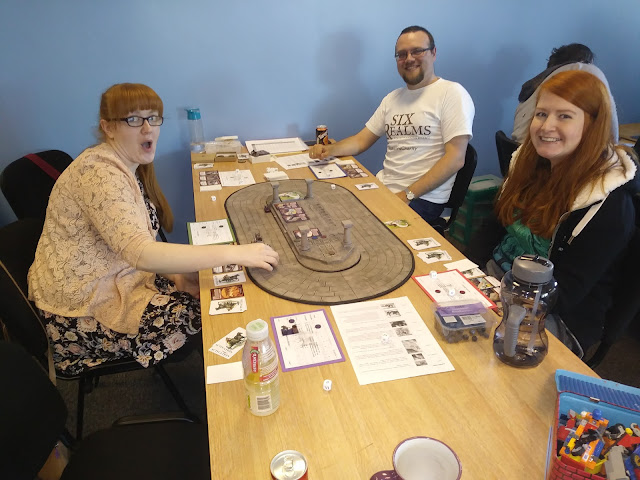 We've played it with 6 and it's great fun and works really well. We need to play with fewer players just to see how the dynamic changes so we went with 4 (inc me).  This was also the first chance I would have to see the new cards on the board being used in anger......well fun anyway!


The game flowed really well, in my opinion and seemed to go back and forth with Hannah taking an early lead before a few bad cornering rolls slowed her right down. This allowed me to overtake her and slip into pole position. 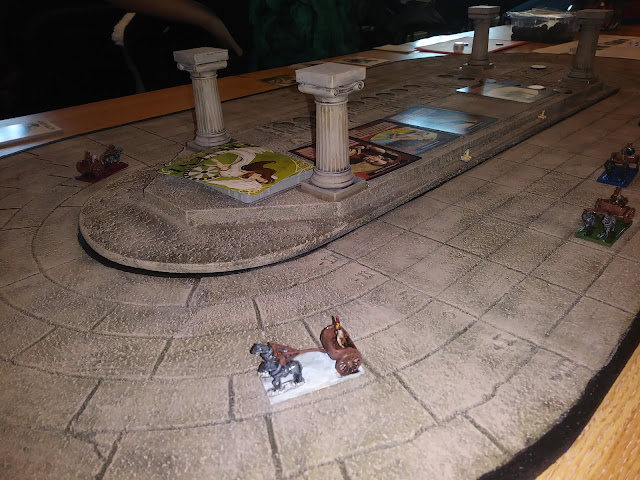 Jess, took umbrage at that and dropped a trip wire and an obstacle right in front of me which took me down the speed track and slowing me up. 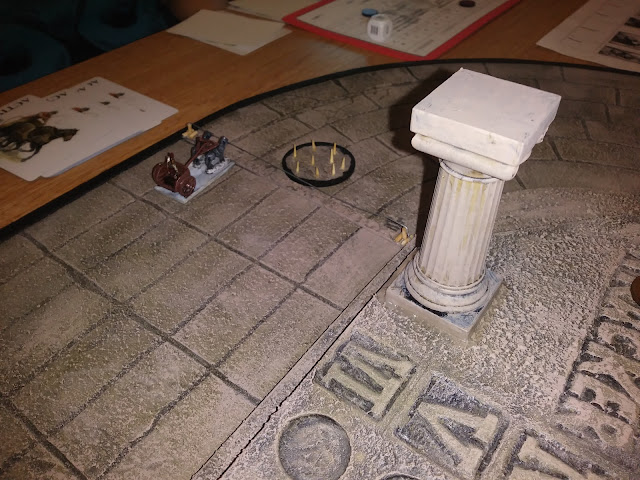 Below you can see my player board, at this point I have had an activation card blanked due to the damage dealt by Jess's obstacle. 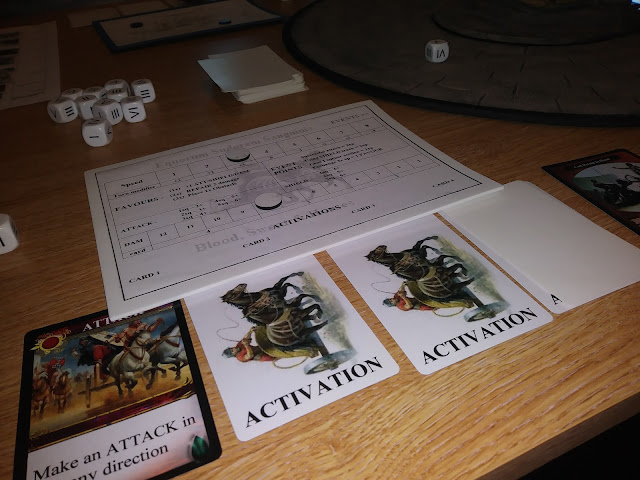 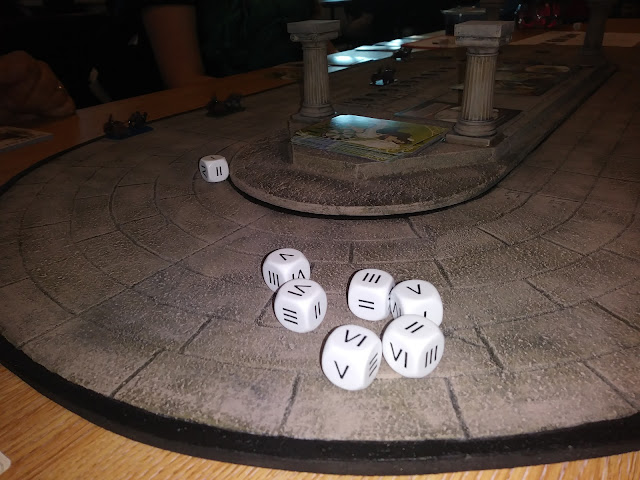 Eventually the damage took it's toll and I slowed to a crawl allowing Jess to streak pass me and win the game!

Curses, I can't even win a game I designed! 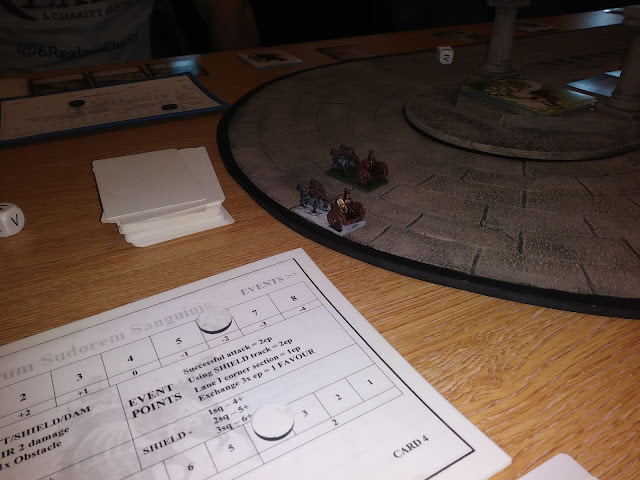 In a fit of sulks I challenged Jess and Hannah to a game of Great Western Trail....which Jess beat me at.....

All in all the game has gone down really well and the game seems to be hitting the right notes with the board games community, I need to get more wargamers playing it in order to gauge their opinion.