Anna slashed left and right with the hockey stick, knocking the outstretched hands of the zombies that were closing in on her. Dropping the blade toward the floor, she used the curved edge of the stick to trip her first attacker – Ray's son Jacob.  As he dropped to the floor she reversed the stick and powered the hardened wood into the face of Amy Smith.  Anna drove her steel toecaps into the side of Jacob's head, crushing his temple and causing him to release her other ankle where he'd been trying to drag her to the floor.


He slams the knife in between the bitch's big fake boobs with relish, he hates the way she always wears clothes that show of her surgeon's good work - now they're covered with her thick blood! Stepping passed the slut he slams the old geezer with a massive punch that cracks his knuckles with the power he can now generate, destroying his face and throwing him back into the dickhead that was Ray.   Reaching out with his massive hands he grabs the annoying ex-trader by the lapels of his shitty suit and propels him directly up, driving him head-first into the low ceiling and snapping his neck with the force.  Satisfied he looks around for someone else to tear apart and spots the woman drive her boots into the head of the lad on the floor with a delicious thud!  The fight is over and again he feels frustrated, the need to tear and smash is undiminished in him.  Sniffing the air, he smells fresh blood and realises that she is injured.  He walks over to her and feels a surge of the old humanity come to the fore, he smiles at Anna and holds her gently by the hand leading her into the kitchen and away from the corpses of the family that they have killed.

Anna cringed back as the giant man strode toward her, until she spotted the smile.  That was the smile she had fallen in love with, the one just for her.  With something like the old tenderness he led her into the kitchen, leaving her by the counter as he rummaged through the cabinets until he came across a first aid kit.  The long, bloody scratch given to her by the zombie outside throbbed like crazy, then burned like hell as her fiance poured TCP into the wound.  Taking a dressing from the green box stamped with the logo of St John Ambulance, he quickly wrapped the jagged laceration and taped it down.  "That should hold you" he concluded with another smile.

"I wonder what else they've got in this place?"  Chris asked as he looked around the small room.  "Didn't Ray boast about having a gun in the house at that party he threw last month?"  With that he walked up the stairs as if he hadn't a care in the world.

In a daze, Anna followed her partner out of the kitchen.  His mood swings were dizzying in their rapidity, one minute he was the kind and loving man she had pledged her life to, the next he was.... well she didn't know what he was! A crash from ahead pulled her out of her thoughts.

Pounding up the stairs she saw a half-naked girl throw herself at her fiance, her fingernails curled like claws. Clad only in her underwear, the teenager was followed by another female dressed in a red silk negligee as they lunged at Chris. The big man widened his stance and caught both of the infected girls by the neck before they could fasten their snapping jaws onto his arms, holding them at bay. Anna edged around the massive frame of her partner and stepped into the room.  It was a typical teenager's bedroom – posters on the wall, clothes on the floor and the curious smell of body odour and weed that was now mixed with the smell of old blood.  Another young woman, clad also only in her underwear 'stood' on stumps, her legs held by the last occupant of the room – Bryan Smith.  The last member of Ray's family and obviously a dark horse with the ladies was munching on the limbs of his former lover. As Anna came into view he dropped the legs and reached for yet another woman! The medic swung the hockey stick, smashing Bryan's jaw and pummelling the lothario into oblivion. Stepping over his falling body, she crashed the blade of the stick into the parietal bones of stumpy's skull, splintering her favourite stick in the process. “Damn it, you fucking slut!” She screamed in the zombie’s face, all of the frustrations of the last 24 hours and more pouring out of her. Stepping over the body of the kid, she picked up a baseball bat that Bryan had chucked into the corner with his other sports kit and gave it a practice swing, grunting with satisfaction with the balance of the bat. 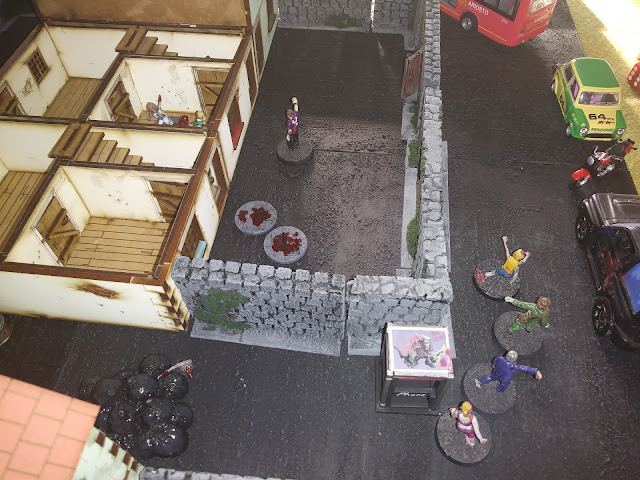 Almost immediately the door burst open and zombies crashed into the room, all female and one of them barely ten years old if she was a day. Chris growled as he tore into the group, his knife flickering back and forth like a serpent’s tongue and spraying blood with every blow. Anna swung the baseball bat hard, putting her shoulder into the action like a pro. The aluminium sheath of the weapon produced a uniquely metallic thunk as it powered through the zygomatic bone of the kids face. Horrified that she had had to strike a child, albeit an infected one, she burst into tears, dropping to her knees as all her strength drained from her.

The last sentiments of his previous life are falling away now, no longer does he look upon the woman as a lover, a soul mate. Now he just sees her as a burden, holding him back, stopping him from becoming what he is meant to be. Look at her now - on her knees, the tears confirm her weakness, unfit to survive this new age of mankind. He wants to scream at her “Get up! Embrace the apocalypse and all the potential fun that it promises”. Instead he holds out his hand and pulls her to her feet - a little longer, he needs her for just a little longer.

Anna smiled gratefully, thankful for the hand up and somehow misinterpreting the strange look on Chris’s face as concern. A creak of the stairs was the only warning she got as more of the infected entered the house, intent on snacking down on the fresh blood coursing through the young couple’s veins. Stepping forward, Chris hefted his bloodied knife and swept it across the throat of the closest zed nearly decapitating the former Thanetonian.  Anna, stilled reeling from the “death” of the little zombie girl and pissed off about her favourite hockey stick and the last reminder of happier times, swung her foot as hard as she could muster into the groin of the male that tried to grab her. Ineffective as the kick was, she immediately felt a little better and that bought a little smile to her face as she followed it up with a crashing blow with her new weapon to the skull of the zombie. 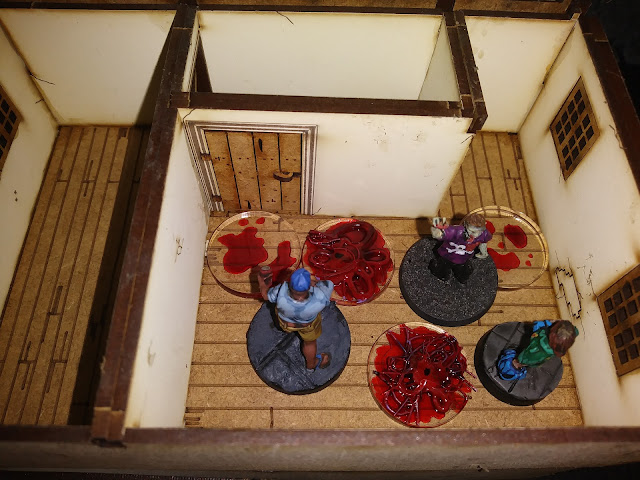 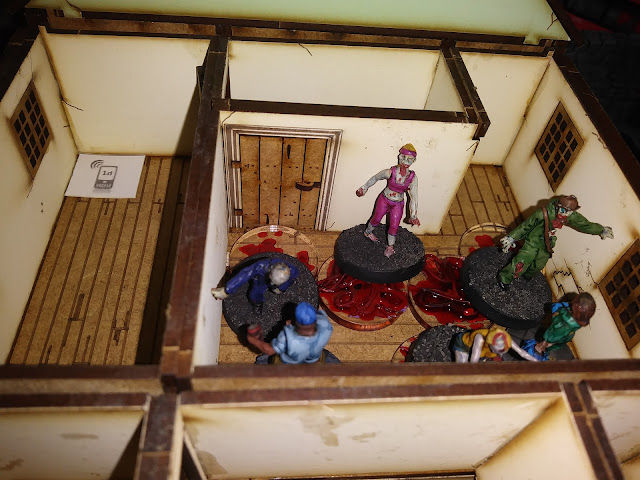 He laughs as he nearly sweeps the head of the infected female off of her shoulders, the pain shooting through him diminishing with every cut he delivers. The woman tries to keep up and kicks the approaching male hard and even he winces in sympathy as the blow connects with unerring accuracy. The loud metallic thunk as the baseball bat bounces off the head of the zombie is music to his ears, soothing the turmoil within. He watches with interest as another nightie clad female bursts out of the bathroom to attack the woman only to be batted into oblivion.

Anna stepped over her latest “kill” intent on leaving Ray’s house, which more accurately resembled a slaughterhouse now. As she reached the top of the stairs, a strident ringing tore apart the relative quiet that had fallen. Ordinarily an everyday noise, the sound of a mobile phone lent a peculiarly sinister tone to the house. Anna knew that the networks had faced immense disruption and communications between the new island of Thanet and the “mainland” were almost impossible.   Realising that it must be an alarm of some kind she strode toward the back bedroom, the piercing sound would draw more of the creatures to the house. 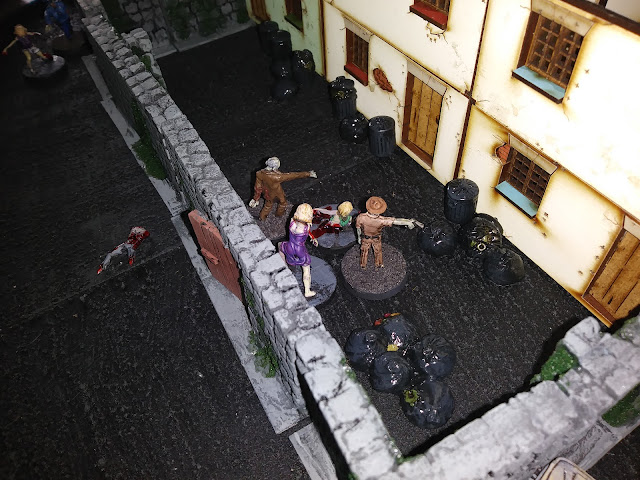 As if on cue, the moaning coming from the infected outside increased noticeably as more and more joined the gathering throng.  Anna paused at the door of the room, holding the bat down by her right leg and shifting the straps of the 'Bag of Life' on her shoulders.  Behind the thin partition she could hear what she thought was a low mutter, but it was distorted by the alarm.  It could be more zombies but she had no choice, she knew she had to silence the alarm before it dragged hordes of the things closer.  Gentle pressure pushed the door open, just as the alarm and the hushed whispering, stopped.
He barges passed the woman, pushing her further into the room as he negotiates the doorway with his massive bulk.  Four people are huddled against the far wall, they appear uninfected and he growls his disappointment knowing that his knife won't be used on these folks.  Turning his back to them he stalks back to the stairwell where he waits impatiently for the woman to finish gassing and gossiping with them. 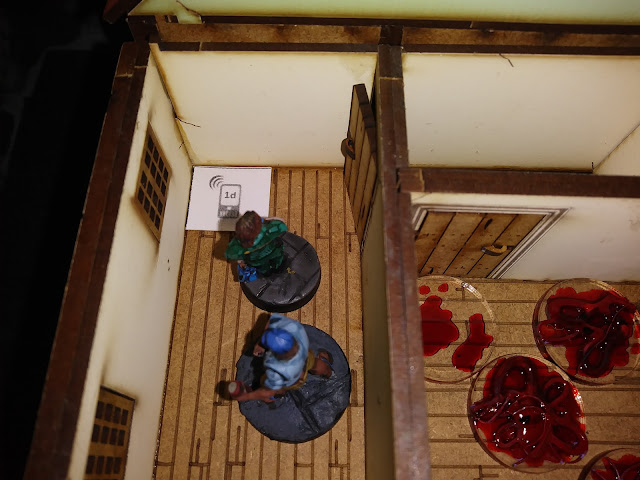 Chris practically threw her into the wall as he barrelled into the room, only to crash back out as quickly as he came in.  Anna dusted herself off and studied the four citizens hiding in the backroom. The eclectic group had clearly sought shelter in Ray's house following the collapse of society.  A well-manicured young woman crouched in the corner of the room, clutching a large kitchen knife, similar to Chris's, although in her tiny hands it looked more like a small sword! Next to her, stood another woman, a little older but even smaller than the first and wielding a golf club.  A man, dressed in an overall and holding a long crowbar, lurked behind them a scared look stamped across his face. Lastly, a tough looking woman, dressed in a 'boob tube' designed to show off her rippling muscles worried Anna the most, particularly the pistol she was cradling in her hand. An antique pistol, like the one her grandad had bought back from the war, looked like it was still as deadly as ever and although the woman hadn't pointed it at Anna, she'd twitched as Chris barged into the room. 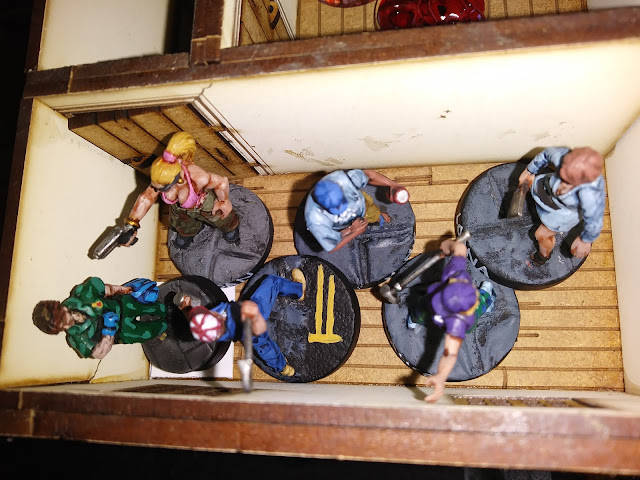 the concluding part next time
hope you enjoy
dGG