the next board to be made was a little different from the urban boards as i wanted to make a clear objective for my Bolt Action games.  I love the idea of Royal Commandos raiding the northern French coast, disabling important communication equipment and radar stations. To this end I had bought the Sarissa set that come with a radar station, spotlight and various bits and pieces.  I just needed somewhere for it to be set up.... 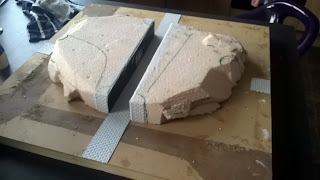 originally i was going to have this board as a cross roads and have a four way intersecting tunnel under the hill.  However i decided to simplify it a little more and have a single road running through and dead ends that ran up to steel doors driven into the sides of the hill.  I wanted the tunnel to be fully playable on the table, so the hill was going to be in two layers and the road running through, doors halfway down the road allow access for troops to enter the catacombs and secret labs under the mountain. 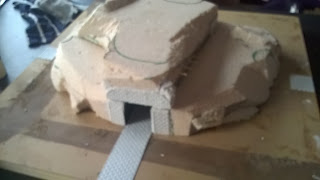 a ramp was added to the outside to allow troop movement and to allow heavy equipment to be moved to the crest of the hill and the station that will be positioned (when painted) on top. 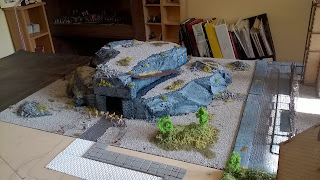 barricades and barbed wire are placed around each entrance and foliage and rock piles to add a little bit of cover and voila! so not quite an urban board but it will be placed on the edges just to add something different to my games.  plus i have painted up loads of corridors for troops to infiltrate with rooms to fight in and game around, indeed recently myself and a friend had a split table with Chris's Brits trying to destroy a secret lab on the floor plans while a full scale assault was distracting my German garrison on the boards! 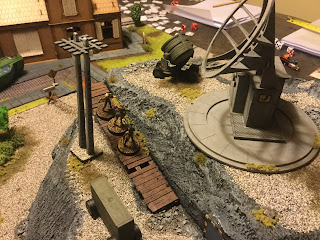